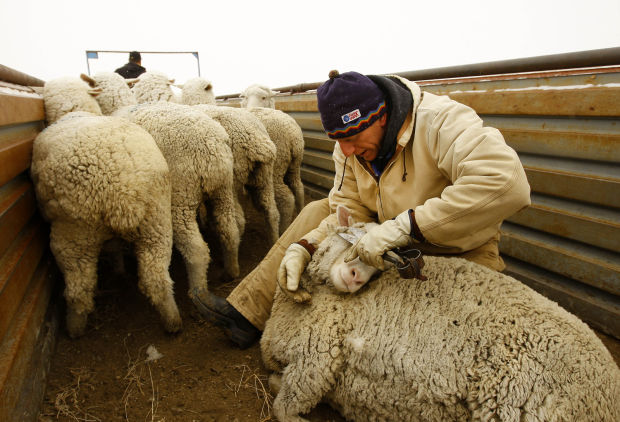 Family friend Aaron Kessler snips wool from the eyes of ewes as they're lined up for ultrasounds recently in Johnson County. Kessler is a teacher at Sheridan High School and volunteered to help. (Dan Cepeda, Star-Tribune) 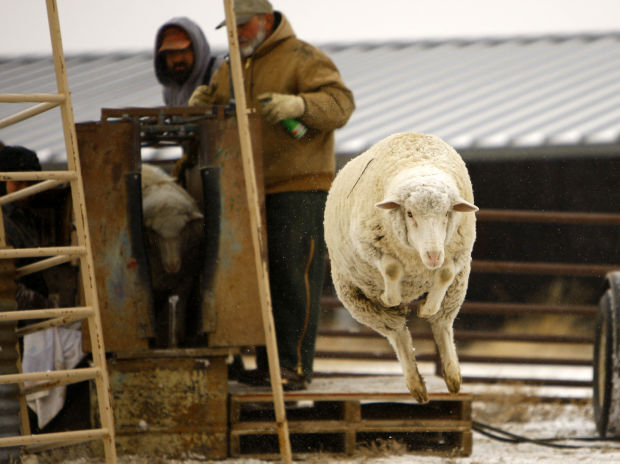 A ewe leaps through the air as it runs from the chutes during ultrasound testing in 2014 at Peter Camino's ranch in Johnson County. The sale of the Mountain States Rosen lamb processing facility in Greeley, Colo., to JBS is posing a threat to sheep ranchers in both Johnson County and Wyoming. 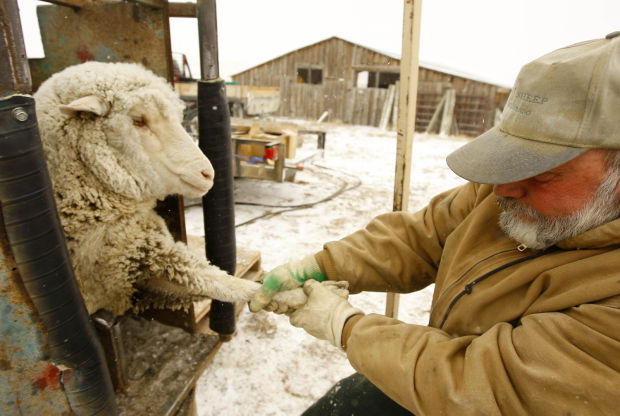 Sheep rancher Peter Camino tries to coax a stubborn ewe out of the chute during ultrasound testing recently in Johnson County. Camino is a third-generation Basque sheep rancher. The industry was once dominant in the area but has scaled back over the years. (Dan Cepeda, Star-Tribune)

JOHNSON COUNTY – Veterinarian Eric Barlow sat on an dirty, white bucket and rubbed a probe over a ewe’s belly, waiting for the shadowy outline of a lamb to appear on the screen before him.

“One,” Barlow said, as the sheep jumped out of the box and into a corral.

“That’s not what we want,” Camino responded. “We want to hear two.”

Barlow started giving Camino’s sheep ultrasounds about 15 years ago. They work long hours through blizzards and blazing sun. The end result, Camino says, is worth it.

He knows exactly how many lambs he may have in the spring, allowing him to plan.

“It all comes down to the bottom dollar,” Camino said. “If you can’t do it efficiently dollar-wise, you can’t stay in the business.”

And Camino knows. He’s watched friends and family drop out of the sheep ranching business across Wyoming. The nation’s sheep industry has been plagued for decades by drought, predators, high fuel and feed costs, volatile lamb prices and dwindling labor.

In 1940, more than 3.78 million sheep and lambs grazed Wyoming’s mountains and prairies, according to the Wyoming Agricultural Statistics Service. In January, Wyoming ranchers reported owning 355,000 of the animals.

But sheep ranchers hope the industry is poised for a comeback, buoyed by strong lamb prices and a resurgent market for domestic wool.

“We’ve weathered storms, droughts and blizzards,” he said. “We’ve been in the sheep business the whole time.”

A long road down

Camino’s grandfather came to Johnson County in the early 1900s as a sheep herder from the Basque region of Spain. He worked for a few years before buying enough sheep to start his own ranch and handed the business to his son in the 1960s. Peter Camino and his brother grabbed the reins about 10 years ago.

Camino blames a number of reasons for the decline including drought, predators, lamb prices, difficulty finding labor and high interest rates. As with cattle and farming, children of ranchers are moving into other industries.

Raising sheep on open range requires herders who live with and move sheep every day. The animals depend on grasses subject to whims of weather.

Mike Harriet, Camino’s cousin, ran sheep for 40 years next to Camino before selling about a decade ago.

“I got out because of coyotes and everything else,” he said. “Raising sheep is a tough road to go. If you get lucky and have a good year, you can make it, but if you aren’t lucky, you won’t.”

When the price of lambs went down, the price of tires, equipment and gas kept rising. Ranchers just couldn’t keep up, he said.

Weather killed 6,500 sheep and lambs, 3,000 died from lambing complications and disease killed another 1,100. Nine hundred head died of old age, 800 were poisoned and 400 were stolen.

“When it’s storming and bad outside, I don’t regret it at all,” Harriet said. “When it’s sunny and looks like a million bucks, I’m sorry.”

Not every sign points to despair for Wyoming’s sheep industry.

Even with low numbers, the Cowboy State produced 2.45 million pounds of wool in 2013, second in the nation only to California, Brandt said. It also receives the second most money -- $2.13 per pound-- for its wool.

Wool prices look like they may be the third highest this year than they have been in 10 years, said Larry Prager, general manager of Center of the Nation Wool, a wool marketing firm based out of South Dakota.

Most of Wyoming’s wool goes to dress military uniforms. With the advent of soft, washable wool, the product is making a national comeback in socks.

Point of origin has also become a trend in products, something Wyoming wool growers are trying to market.

The Wyoming Wool Growers Association announced in January a special edition blanket. The wool comes from Wyoming ranchers and is cleaned and made into yarn by Mountain Meadow Wool Mill in Buffalo.

“Consumers want to know where their items come from,” he said. “No question there will be a market for wool. With a return to natural fibers, environmentally friendly textiles, wool fits that bill well.”

Jim Magagna, executive vice president of the Wyoming Stock Growers Association, thinks the sheep industry is stabilizing. Lamb prices are back up from their crash in 2011. Ranchers have incentives to increase their sheep numbers.

“As much as I would love to see it, I don’t see major growth in the industry,” he said. “But I do think I can look on the horizon and see why the decline would reverse itself and maybe stabilize and see slight growth.”

Camino is thinking of expanding. His ultrasounds showed him many of his sheep carried two lambs. This year could be a good one, he said.

“Now I know what kind of lamb crop I have, we can set up for lambing season,” he said. “Now it’s just keeping them alive.”

Wool from the blanket comes from sheep in Johnson County, and is made into yarn by Mountain Meadow Wool Mill in Buffalo. The yarn is then sent to Minnesota, where it is woven into blankets.

Proceeds from the blankets go to the Wyoming Wool Growers Association.

Blankets are natural cream color or natural gray. They are $300 plus taxes and shipping.

For more information, or to order a blanket, go to www.mountainmeadowwool.com or call Mountain Meadow Wool at 307-684-5775.

Biden Pledges to Cut Greenhouse Gas Emissions in Half by 2030

5 home remodeling trends to watch for in 2021

Open floor plans are out; dedicated spaces for remote work and learning are in. Also, check out more home and personal finance advice from experts at NerdWallet, Forbes and the Motley-Fool.

Holding off on claiming benefits could score you a higher payout each month. But in this scenario, it's worth giving that up.

Family friend Aaron Kessler snips wool from the eyes of ewes as they're lined up for ultrasounds recently in Johnson County. Kessler is a teacher at Sheridan High School and volunteered to help. (Dan Cepeda, Star-Tribune)

A ewe leaps through the air as it runs from the chutes during ultrasound testing in 2014 at Peter Camino's ranch in Johnson County. The sale of the Mountain States Rosen lamb processing facility in Greeley, Colo., to JBS is posing a threat to sheep ranchers in both Johnson County and Wyoming.

Sheep rancher Peter Camino tries to coax a stubborn ewe out of the chute during ultrasound testing recently in Johnson County. Camino is a third-generation Basque sheep rancher. The industry was once dominant in the area but has scaled back over the years. (Dan Cepeda, Star-Tribune)