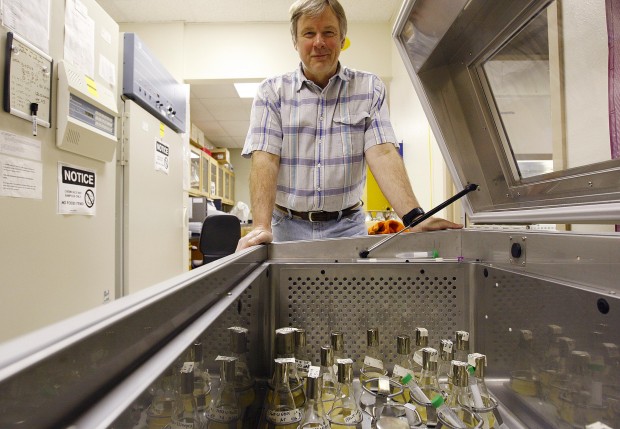 Donald Jarvis of GlycoBac poses next to bottles of cell cultures that are being cured for testing in Laramie. GlycoBac is using insect cells as a platform to manufacture pharmaceutical drugs and is one of the most recent spin-outs from the University of Wyoming.

Virus stock sits in one of the refrigerators at GlycoBac in Laramie. The viruses, which are derived from insects, are harmless to humans.

Think of it like Macs and PCs. They perform basically the same function but with different platforms.

That's what University of Wyoming professor Donald Jarvis has done for producing medicine. He created another platform in what is called biologics.

Historically, and most commonly, certain medicines, vaccines and antibodies were made from mammalian cells. The polio vaccine, for example, came from monkey kidney. Even though scientists have long since stopped collecting actual monkey kidney to make the vaccine, the base still comes from generated cells.

While safe and well-tested for nearly any possible issue, using mammalian cells still allows the slightest chance of transferring a virus to humans. It's also costly and time consuming.

Jarvis and his colleagues found a new basis for biologics, this time using insect cells - caterpillar ones, to be exact.

With their discovery, they formed a company called GlycoBac LLC, one of the most recent to spin out of the University of Wyoming. Recently, 10 companies have spun out from the university using mostly federally funded research.

"It's a company that has a great deal of upside potential," said William Gern, vice president for research and economic development at the University of Wyoming. "We are really excited about it. The markets for some of these biologics are huge."

GlycoBac is what is called a spin-out. UW holds the patents to Jarvis' research since it was done at the university using federal funding. This means Jarvis can use the patent in his own company, but a cut of GlycoBac's profit will go back to UW.

Right now, GlycoBac is in its infancy. It started officially in June 2011, one of four recent spin-outs. The company doesn't have much money, yet, and Jarvis is the de facto president. UW researcher Christoph Geisler is scheduled to be the chief scientific officer and will be responsible for the future scientific development of products.

Jarvis started his research with insect cells in 1987. He realized after years of research that insect cells lacked the ability to produce proteins with the correct sugars, which are critically important for biologics to work. He and colleagues kept working, and through what they call "glycoengineering," managed to attach the right sugars to the right proteins.

The new cell can be used in biologics for vaccines and therapeutic drugs such as antibodies used to treat cancer, Jarvis said.

"My company will not be in the biologics production business. It's very difficult to develop biologics; it's a very complicated and expensive industry," Jarvis said. "Our game plan is to provide the platforms we've developed to those who do manufacturing already."

The new platform could be used to produce any vaccine, and in fact two vaccines already exist using an insect platform. More don't exist, Jarvis said, because of the original issues with sugars and proteins.

Now that they have solved that issue, Jarvis wants to see the insect-based biologic extended to other drugs.

He's not trying to reinvent the wheel. Insect cells are lower-cost than mammalian ones and development can be faster without the safety concerns related to mammalian cells.

"The more companies there are offering platforms, the more likely it is the cost of the drugs will drop," Jarvis said.

Like many recent University of Wyoming spin-outs, GlycoBac plans to move into the university's business incubator.

In 2011, Geisler entered the University of Wyoming College of Business competition, called the $10K Entrepreneurship Competition, and tied for first. With the $12,500 prize money, the company formed and presented to other groups, including the Wyoming Small Business Innovation Research Phase Zero program, an initiative sponsored by the Wyoming Business Council and administered by the University of Wyoming.

The council gave GlycoBac an initial $5,000 for Phase Zero and the company has applied for Phase 1, which offers $700,000 for research and development.

"Without the 10K and without the Wyoming SBIR Phase Zero program, we may not have ever gotten off the ground as a new company," Jarvis said.

That is the purpose of the programs, according to William Gern, the university's vice president for research and economic development.

A successful spin-out benefits not only the university, but Laramie and Wyoming as a whole. Financially, the university receives a portion of the royalties from the patents and copyrights it registers. Those royalties will likely never be enough to fund the university. Even Stanford, one of the largest academic patent institutions in the country, only recently reached the point where the licenses paid for their technology transfer office. But the benefit to Laramie and the state as a whole can't be overlooked, Gern said.

"We're doing this because we want to build a tech economy," he said.

One example is Laramie-based Firehole Composites LLC. The software company started with a group of three university students and one professor in 2000.

The company now employs about 20 people in its offices in Laramie, Casper and Seattle. Of those, 14 or 15 work in Laramie.

It creates software that allows companies to simulate products made of composite materials, which are super strong and super light, on a computer, said Jerad Stack, CEO and one of the founders of Firehole Composites.

It started running simulations for the U.S. Navy. In 2007, Firehole Composites went through the university's incubator and now sells its software to other companies that make products including airplanes, cars, hockey sticks and bicycles, to name a few.

"Our relationship with the university on many levels has been a key tenet to our success," Stack said. "Not only has our technology come from there, they support us, our interns come from there and our Laramie staff is mostly University of Wyoming graduates."

The jobs it creates are good, high-paying ones, Gern said.

"It's creating businesses that employ people who go out and buy things in the community," Gern said. "That's why we do it."

In the past decade, about 20 companies have spun out or started up from the University of Wyoming.

A spin-out company is one in which research is developed using mostly federal funds at the university. The university then holds the patents and copyrights, earning a portion of the company's profits. UW currently has 54 issued patents, said William Gern, vice president for research and economic development at the University of Wyoming.

Start-up companies are ones in which research is done outside of the workplace and isn't funded through the university, but it is done by university faculty or staff. The university does not own any rights to start-ups, but helps in business development if it can.

Four or five companies have spun out within the past year.

"We've been more active recently because we've been gaining critical mass," Gern said. "As we increase patenting, we increase companies. We are setting up the ways to capture this stuff."

In 2011, the university received nearly $78 million from federal and industrial sources. Usually about 66 percent of each grant -- which totaled almost $52 million in 2011 -- goes to salaries, which, injected into the economy, creates another $105 million in secondary economy.

The money ultimately makes UW's research enterprise the fourth largest producer in the Wyoming service-sector economy, Gern said. It is also one of the largest employers of University of Wyoming undergraduates.

* IDES: a software company with one of the largest plastics databases in the world

Environmental groups sued Wednesday over the environmental analysis underpinning 123 leases up for sale this week in Wyoming.

Wyoming's first oil and gas lease sale since 2020 ended Thursday. Companies bid on an unusually low share of available land, but paid significantly more, on average, for the acreage they did lease.

In a setback for climate advocates, the Supreme Court ruled Thursday that the EPA overstepped its Congressional authority when it set Obama-era limits on greenhouse emissions.

Regular gasoline set another statewide record of $4.90 per gallon on Friday. That’s up from a previous high of nearly $4.89 a week earlier.

What if you can't 'out-budget' inflation?

Here’s how to combat inflation if money is already tight.

Thinking about buying a boat or RV? Here is what you should consider | PennyWise podcast

🎧 A boat or RV can make for a fun summer, but there are costs to consider before you make a big purchase. Get tips on the latest PennyWise podcast.

In the search for low-carbon energy sources, Wyoming is keeping its options open. But hydrogen continues to rank near the top of the list.

Wyoming’s first federal oil and gas lease sale in more than a year is set to begin today. Few are satisfied with the offerings. And nobody is sure how it will play out.

In what order should you tap your retirement funds?

Knowing when and how to draw on your various assets can have a big impact on how much in taxes you’ll owe from year to year.

Donald Jarvis of GlycoBac poses next to bottles of cell cultures that are being cured for testing in Laramie. GlycoBac is using insect cells as a platform to manufacture pharmaceutical drugs and is one of the most recent spin-outs from the University of Wyoming.

Virus stock sits in one of the refrigerators at GlycoBac in Laramie. The viruses, which are derived from insects, are harmless to humans.