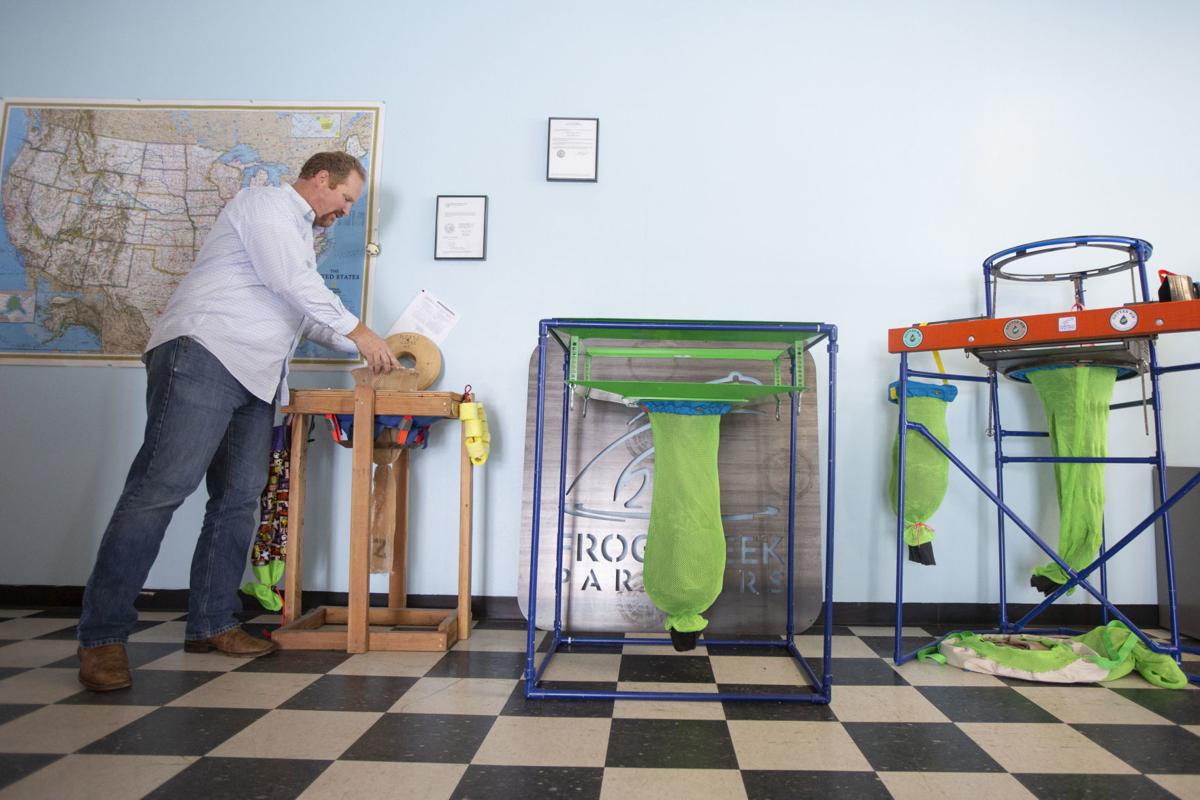 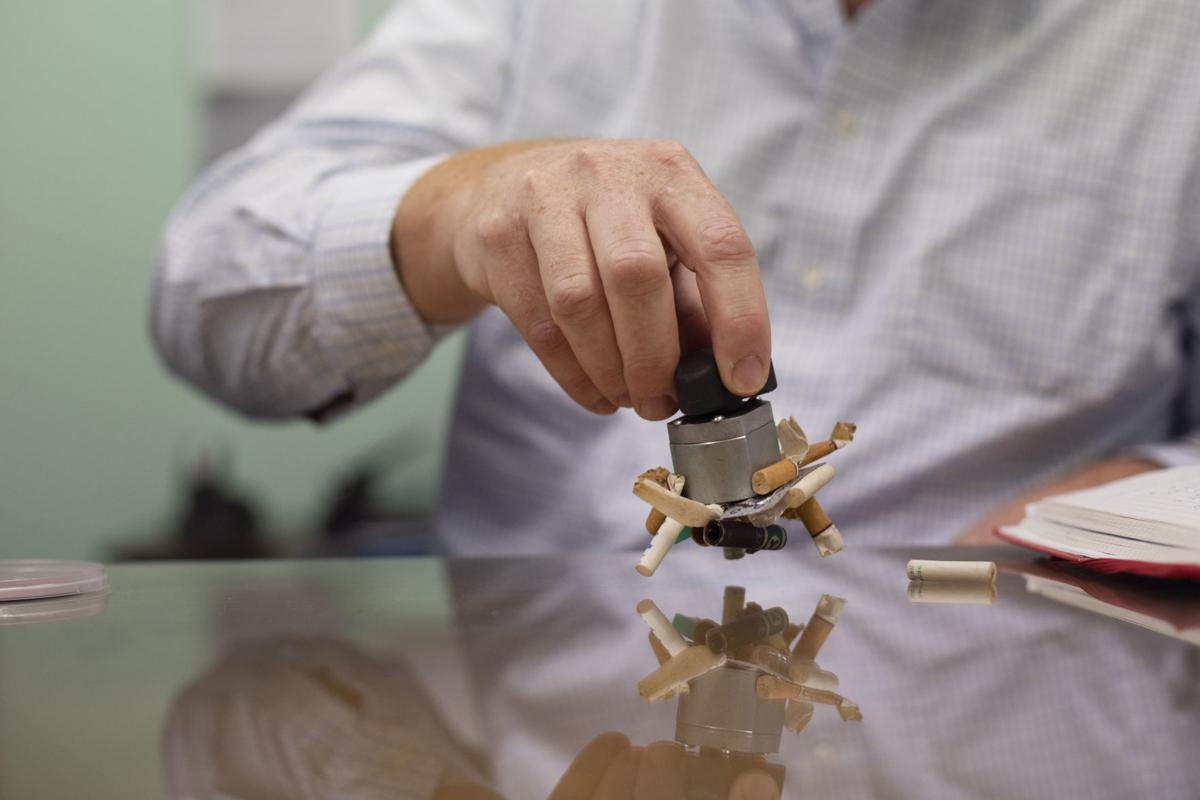 Brian Deurloo, president of Frog Creek Partners, demonstrates an early invention of his that would insert a small magnet into cigarette butts to allow for quick and easy cleanup Thursday at his office in Casper. Deurloo could not get this product funded but it inspired him to create the Gutter Bin which catches cigarette butts and other trash from storm water runoff before it can pollute waterways. 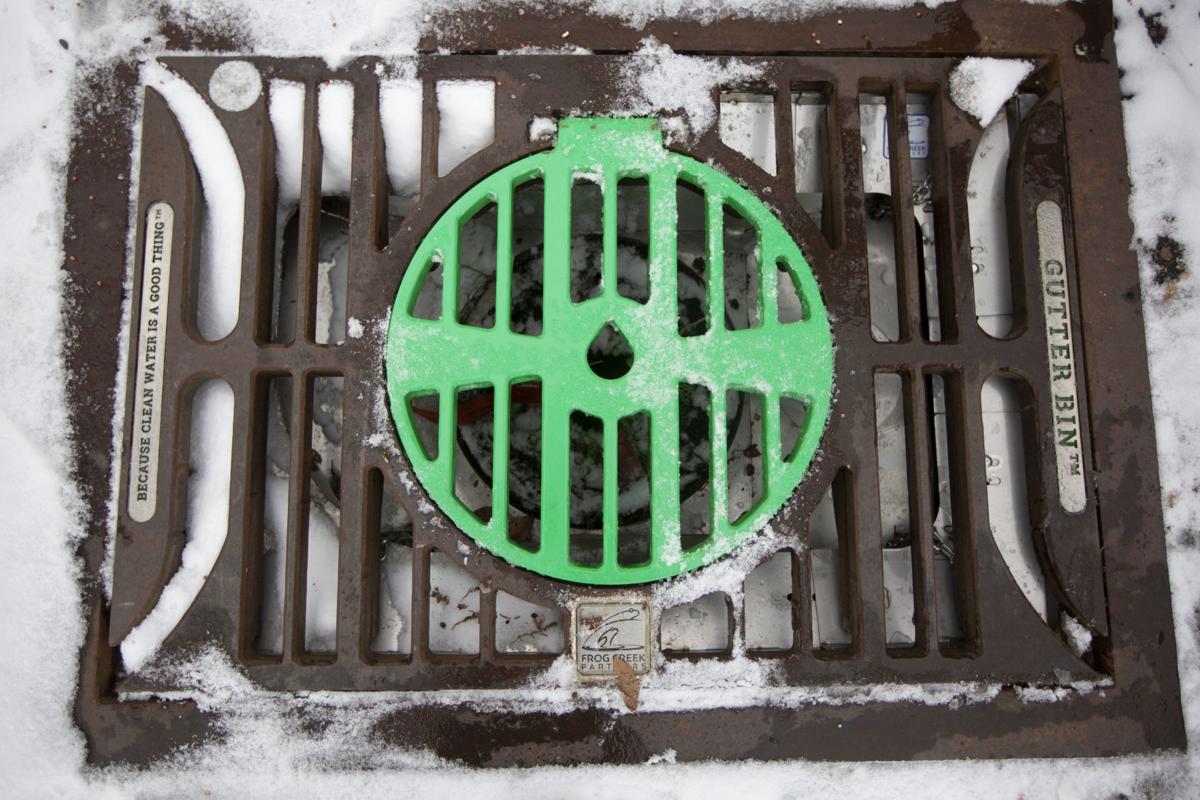 Outside of Frog Creek Partners in Casper is a Gutter Bin, which uses Mundus Bags to collects trash and other detritus from the storm water runoff.

It all started with cigarette butts and an idea that struck him in the middle of the night.

Brian Deurloo had spent about 20 years working as an engineer in the oil and gas sector, but after being laid off from his job, he couldn’t get his mind off of cigarette butts and the damage they could do if they reached our waterways. So one night, he headed to his garage and started building.

Now, four years later and after much tinkering, Deurloo is the president and founder of a growing Casper business that aims to keep discarded cigarette butts — and other trash and pollution — from reaching our streams, lakes, rivers and oceans.

The business, Frog Creek Partners, makes filtration systems to catch trash, sediment and other pollutants as they enter storm water systems, but before they drain into a watershed. Frog Creek’s Gutter Bin systems even catch oil and gasoline.

“All the stuff you see on the streets — the straws, the cigarette butts, the heavy metals, the hydrocarbons — all of that, when it rains, goes right into the storm drain and into the river,” Deurloo said.

Frog Creek’s Gutter Bin systems have been installed in areas of Jackson, Cheyenne, Sheridan and recently Casper. The company’s storm drain basin filters are also in other states such as Colorado, California, and Deurloo said he’s had interest from other countries.

That’s allowed the business to grow to four employees and about a dozen contractors. The company was one of the winners of the 2016 Casper Start-Up Challenge.

“It’s starting to grow,” he said. “It’s going good. Storm water pollution — people are starting to realize how big of a problem it is.”

Deurloo said while some competitors make similar products, the ease-of-use of his designs sets him apart. And he’s received one patent and has a few pending, in the U.S. and internationally.

Most of the Frog Creeks products are manufactured in Wyoming, with the filter bags — called Mundus Bags — sewn in Casper. Deurloo said mundus is a Latin word that has several things: mankind, universe, clean and tidy.

The Gutter Bins, he said, are easily installed, require little maintenance and can fit most storm drain basins.

At the Denver Zoo, Gutter Bins have were installed recently after its lion yard and main parking area flooded and trash and sediment clogged the zoo’s storm drains. Now, the zoo says the filtration system is saving it $40,000 a year in maintenance costs.

“What started as a clogged storm drain turned into a wonderful relationship right in line with our commitment to sustainability,” said Jennifer Hale, senior director of campus management and sustainability for Denver Zoo, in a press release this summer. “We’re able to avoid substantial clean up costs and we have a permanent way to keep our storm water free of pollution, far more benefit than we initially bargained for.”

In Downtown Denver, Frog Creek has 15 Gutter Bins, a tiny fraction of the city’s 22,000 storm drains. If completely protected by filtration systems, 4.5 million pounds of pollution could be collected and avoid being dumped into the South Platte River watershed.

Still, those 15 filters have captured more than 3,200 pounds of pollution since they were installed between April and December 2018.

While Casper currently has 16 Gutter Bins in storm drain basins, Deurloo said he hopes to continue grow the number of storm drains his products protect in the city.

In the U.S., according to Frog Creek Partners, most of the 40 million storm sewer catch basins are unprotected. If filtered, 41 million tons of storm water pollution could be captured a year.

Deurloo said the filters he has in downtown Denver fill up in about four to six weeks. The ones in Casper might take three or four months to fill.

Although the trash, sediment and other debris caught in the filter bags goes to landfills, Deurloo said he eventually hopes the pollution the filters catch can be recycled.

He said it can be a challenging job because so few realize the problems storm water pollution poses. But when he shows people his product, or they ask about Gutter Bins and see trash on the streets, they realize its usefulness.

“I say it all the time … it gets peoples’ minds in the gutter,” Deurloo said. “Probably one of the toughest parts of this job is getting people aware that storm water pollution is a problem.”

The Navajo Nation won’t back a coal firm’s expansion into Wyoming. Here’s why.

The purchase came saddled with some $400 million in reclamation liabilities, not to mention royalties and other outstanding debts.

Connecticut's Stag Arms is the latest in a string of firearms manufacturers to move to Wyoming.

Matthew Kull applied to the Casper Start-Up Challenge on a whim.

Casper’s recycling program may soon be facing existential shifts, but residents will have a voice in deciding the outcome.

The most popular option would keep depots while making use of an additional facility.

With a $100,000 Microsoft grant, the Rotary Club will buy at least 50 Gutter Bins from Casper-based Frog Creek Partners to catch garbage and debris before it enters stormwater drains.

Cities with the lowest share of income spent on mortgages

Cities with the lowest share of income spent on mortgages

How to save extra money for the holidays

How to save extra money for the holidays

How to set up a good homeschool environment

How to set up a good homeschool environment

Brian Deurloo, president of Frog Creek Partners, demonstrates an early invention of his that would insert a small magnet into cigarette butts to allow for quick and easy cleanup Thursday at his office in Casper. Deurloo could not get this product funded but it inspired him to create the Gutter Bin which catches cigarette butts and other trash from storm water runoff before it can pollute waterways.

Outside of Frog Creek Partners in Casper is a Gutter Bin, which uses Mundus Bags to collects trash and other detritus from the storm water runoff.