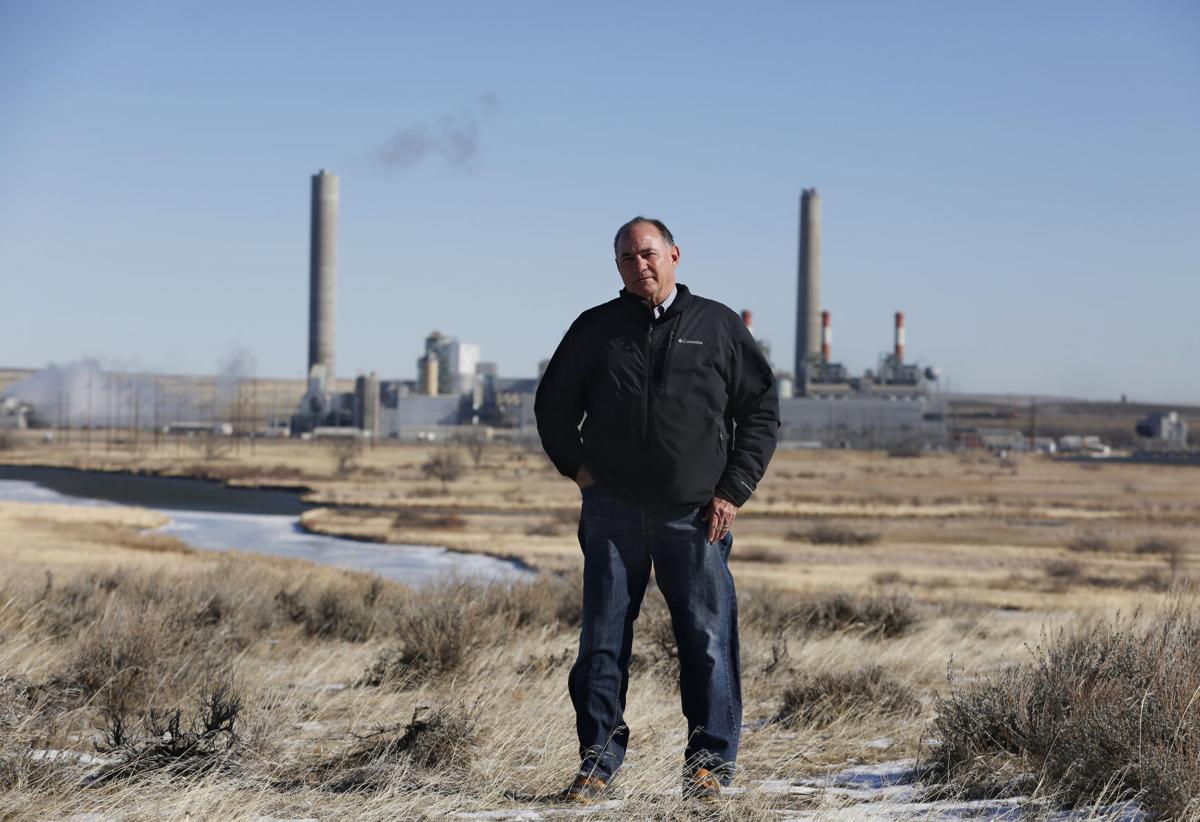 Doug Frank, mayor of the town of Glenrock, stands for a portrait Tuesday against the backdrop of Dave Johnston Power Plant. Frank has advocated for new carbon capture infrastructure to help extend the life of the plant, which provides about 190 well-paying jobs in the town of 2,500. 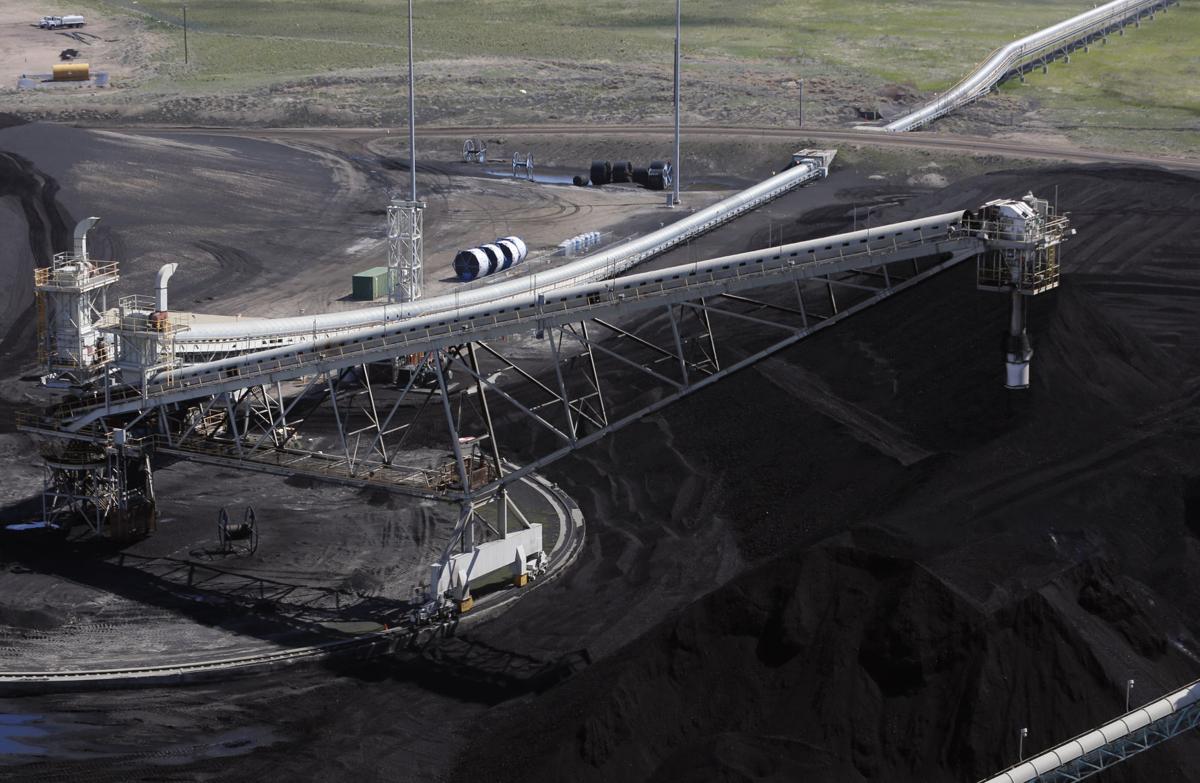 Conveyor belts move coal from a nearby rail line to Dave Johnston Power Plant, pictured May 16 on the outskirts of Glenrock. 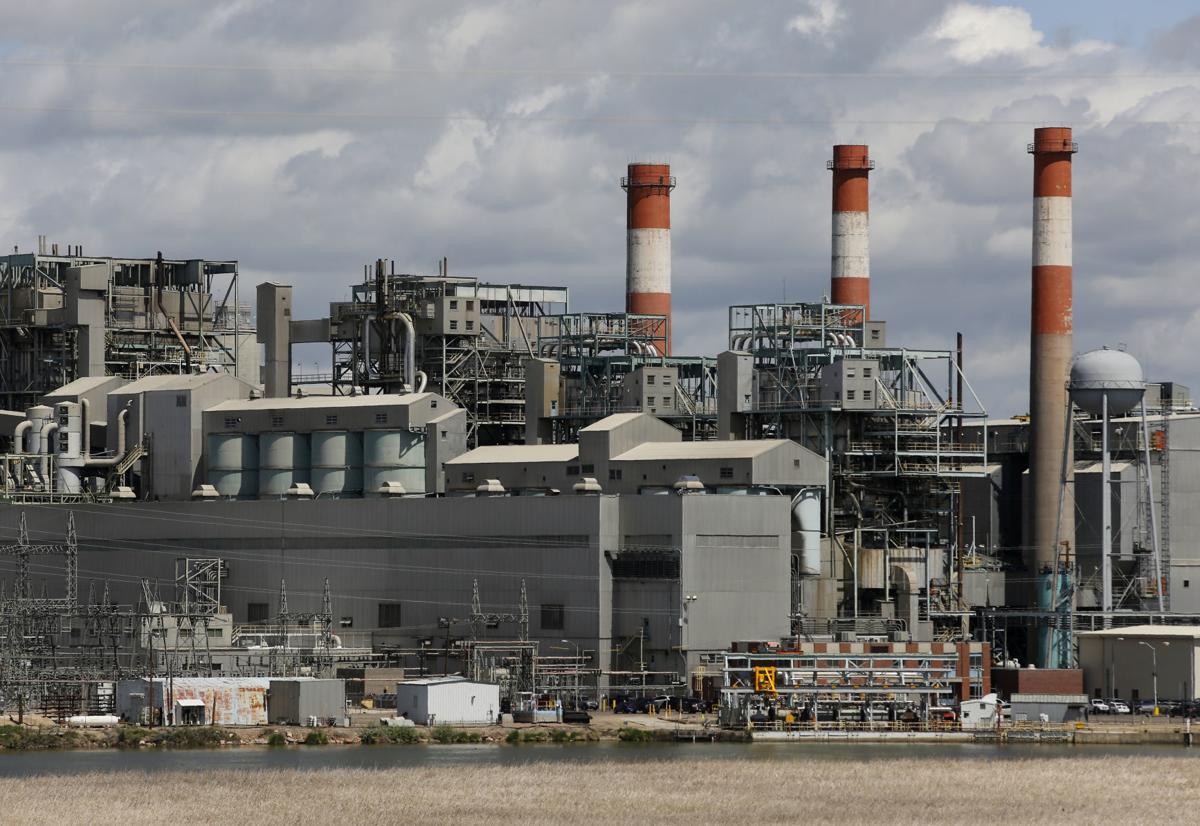 The Dave Johnston Power Plant, pictured May 16 in Glenrock, has four units that came online between 1959 and 1974. Glenrock's mayor is working with a local businessman to try save the power plant from eventual closure by capturing carbon dioxide to use in oil recovery.

Don Walford was playing golf with a rancher in Glenrock when he decided to use carbon dioxide from the Dave Johnston Power Plant to stimulate the nearby oil fields.

It’s certainly not a new idea, but it was new to Walford. An investment banker from Colorado, Walford had spent decades rounding up financing for others to build businesses or play their hands in the oil fields. He started his own oil and gas firm, T-Rex Oil, and bought oil and gas leases near Glenrock.

And he found out something that captivated him: there are millions of dollars’ worth of oil lying beneath the surface of the Big Muddy oilfield between Glenrock and Casper. You can’t get it by traditional means, not by deep wells or shallow, horizontal drilling or fracking. It's trapped in the rocky layers beneath the surface, and the best known way to get to it is to pump in carbon dioxide, a lot of carbon dioxide.

The state is rich in these historic fields, which by some estimates hold onto as much as 60 percent of their reserves after primary oil recovery is finished.

The rancher turned to Walford on the green and said, “You know, if you could figure out the carbon dioxide thing, you are standing on 150 million barrels of recoverable oil in the Big Muddy.”

Walford looked up at the horizon. Against the treeless backdrop of the Powder River Basin, two stacks from the Dave Johnston Power Plant were exhaling a pale cloud into the air.

It’s been nearly three years since that day, and Walford’s quest to wed Glenrock’s coal-fired emissions with the oil fields has become the mission of Glenrock’s mayor, Doug Frank, as well.

In a world where coal-fired power plants are on the decline, these men hope Dave Johnston can serve another purpose and keep a town’s major employer burning. Last week, Congress passed an extension on a carbon capture tax credit that they say paves the way for their big investment. They still need nearly $1 billion, a multitude of partners and the cooperation of Wyoming’s largest utility. But this is the year, they say.

Save a plant, save a town

When it comes to creating carbon dioxide, there is no source in the country more efficient and dependable than coal-fired power.

But in Glenrock, a town of about 2,500 people, Dave Johnston is a source of career jobs for skilled workers, offering benefits and good salaries for nearly 190 full-time employees.

Next to the school district, the Rocky Mountain Power coal plant is the biggest employer in town.

Given that two of its four coal units are hitting old age, the plant is slated to close in nine years, a concern weighing on many minds in the town, including the mayor’s.

“I can’t think of a bigger problem for us to have, than losing Dave Johnston,” said Frank, Glenrock’s mayor.

The need for carbon dioxide is not a dream cooked up by Walford on a golf course.

The University of Wyoming has an entire division devoted to researching and promoting enhanced oil recovery. The National Enhanced Oil Recovery Initiative has been pushing for an extension and reform of the tax credits for years.

It’s that federal assistance more than anything that has pushed the Glenrock venture ahead, said Walford.

In a committee meeting last summer, Wyoming lawmakers heard from David Greeson, the vice president of development at NRG, a power company in Texas that runs the only commercial operation using emissions from a coal plant for a nearby oil field.

“If we are going to do this and make (carbon capture from coal power) work, enhanced oil recovery is the way to get it done,” Greeson told lawmakers.

The industry needs the tax credits to make carbon capture and enhanced oil recovery economic in a reasonable amount of time, he said.

Greeson said the trouble with capturing carbon from power plants to sell is bringing down the cost.

Carbon dioxide for enhanced oil recovery right now runs about $3.50 per thousand cubic feet of gas, he said. Industry would like that price to fall below 50 cents, but they’ll pay as much as $2, Greeson said.

From wind to coal to oil, Wyoming is often in the position where it can tout the power of its resources.

For Frank, the mayor of Glenrock, the same is true of carbon dioxide.

There’s an entire coal sector, he said, which feeds a fleet of power plants near oil fields in need of enhanced recovery.

“We’re sitting here in the perfect storm,” he said.

And whatever your position on climate change or emissions, why not help clean up the air, he said.

Still, the numbers are steep. Frank and Walford are estimating that a carbon capture attachment to Dave Johnston and the pipeline infrastructure to carry that gas between Glenrock and the Salt Creek oilfield would cost between $500 million and $800 million.

“This ain’t cheap, but it produces a considerable return and the (federal tax) credits make the financing feasible,” Walford said.

He says he’s signed memorandums of understanding with engineering, construction, pipeline and oil firms. Those paper promises depend on financing, but Walford said a boutique investment firm out of Texas, Entoro Securities, is looking to raise the money.

The trouble with DJ

There are a host of reasons coal is under pressure in the U.S., and particularly in Wyoming, the largest producer of coal in the country.

Two of its units were built more than 50 years ago. And though Rocky Mountain Power, and its parent company PacifiCorp, has spent millions adding additional environmental standards to Dave Johnston, the company still plans to retire the plant at some point.

He said the company was willing to hear the mayor’s plans and consider if carbon capture at Dave Johnston would be good for customers.

Teply did not respond to an emailed question on whether Dave Johnston’s coal units are currently economic for Rocky Mountain Power.

But he noted there are a number of challenges for the company’s coal-fired power in general. Simply put, coal plants are in stiff competition.

Carbon capture is something the company has looked at, and will consider in the future. Rocky Mountain Power is studying the geology near the Jim Bridger Plant in southwest Wyoming to gauge whether they can inject the carbon emissions into the rock for long-term carbon storage. But these ventures have to fit the business. They have to be economic, he said.

“It’s difficult to justify the expense of carbon capture or other environmental compliance measures when they are costly and the plant [already has] a limited lifetime,” Teply said. “The issue boils down to identifying opportunities at our power plants that make economic sense and don’t introduce unnecessary risks for our customers.”

Today most of the carbon dioxide used in Wyoming’s older oil fields like Salt Creek is being piped by Denbury Resources, a Plano-Texas based firm.

Denbury pumps the gas from Shute Creek, a natural gas processing plant near Kemmerer to fields in central Wyoming and southern Montana.

That system came together years ago, a venture by the large oil firm Anadarko that operated the Salt Creek oil field, and ExxonMobil, which operated the plant.

“You had supply matched to what your needs were,” said Brian Jeffries, executive director of the Wyoming Pipeline Authority.

One of the advantages, if not he key advantage at the Petra Nova plant, in Texas, was that the entire project from the plant to the oil patch, was one company’s endeavor, Jeffries said.

The challenge for a project like the Dave Johnston idea is that there are a lot of players that have to come together, he said.

“It makes getting all the horses going in the same direction harder to do,” Jeffries said.

Still, Wyoming has already envisioned something like this happening, he said.

Gov. Matt Mead’s energy strategy involved laying pipeline corridors for future carbon dioxide movement, anticipating a time when the oil fields would be taking in that gas and someone somewhere would be selling it.

For the mayor of Glenrock, capturing carbon dioxide at Dave Johnston and selling it to the oil fields would be the crowning achievement in his four years serving the town.

He’s a well-built Nebraska native, intent on being a one-term mayor. He fixed the town’s accounting system. He ruffled a few feathers.

But before he leaves office, he’s trying to raise a half a billion dollars to convince Wyoming’s largest utility that carbon capture can make their coal plant run for years to come.

Miners, politicians and local business owners spoke of coal like they would an old friend, a Wyoming character both dependable and indispensable.

Enivronmental group digs in on cost of Wyoming coal power

On a recent summer afternoon, Zoe Jane Morrison, a social scientist from the University of Aberdeen in Scotland, was driving around Gillette l…

Doug Frank, mayor of the town of Glenrock, stands for a portrait Tuesday against the backdrop of Dave Johnston Power Plant. Frank has advocated for new carbon capture infrastructure to help extend the life of the plant, which provides about 190 well-paying jobs in the town of 2,500.

Conveyor belts move coal from a nearby rail line to Dave Johnston Power Plant, pictured May 16 on the outskirts of Glenrock.

The Dave Johnston Power Plant, pictured May 16 in Glenrock, has four units that came online between 1959 and 1974. Glenrock's mayor is working with a local businessman to try save the power plant from eventual closure by capturing carbon dioxide to use in oil recovery.