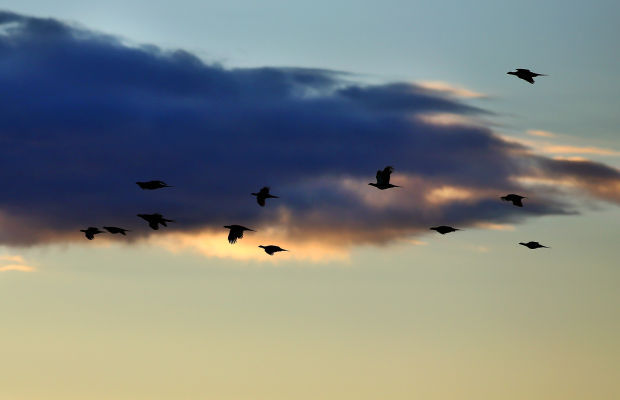 A flock of sage grouse crosses the sky just after sunrise Feb. 9, 2015 near Pinedale. An upcoming lease sale in southwest Wyoming may offer sage grouse habitat for drilling, to the ire of conservationists who argue that would break with federal rules. 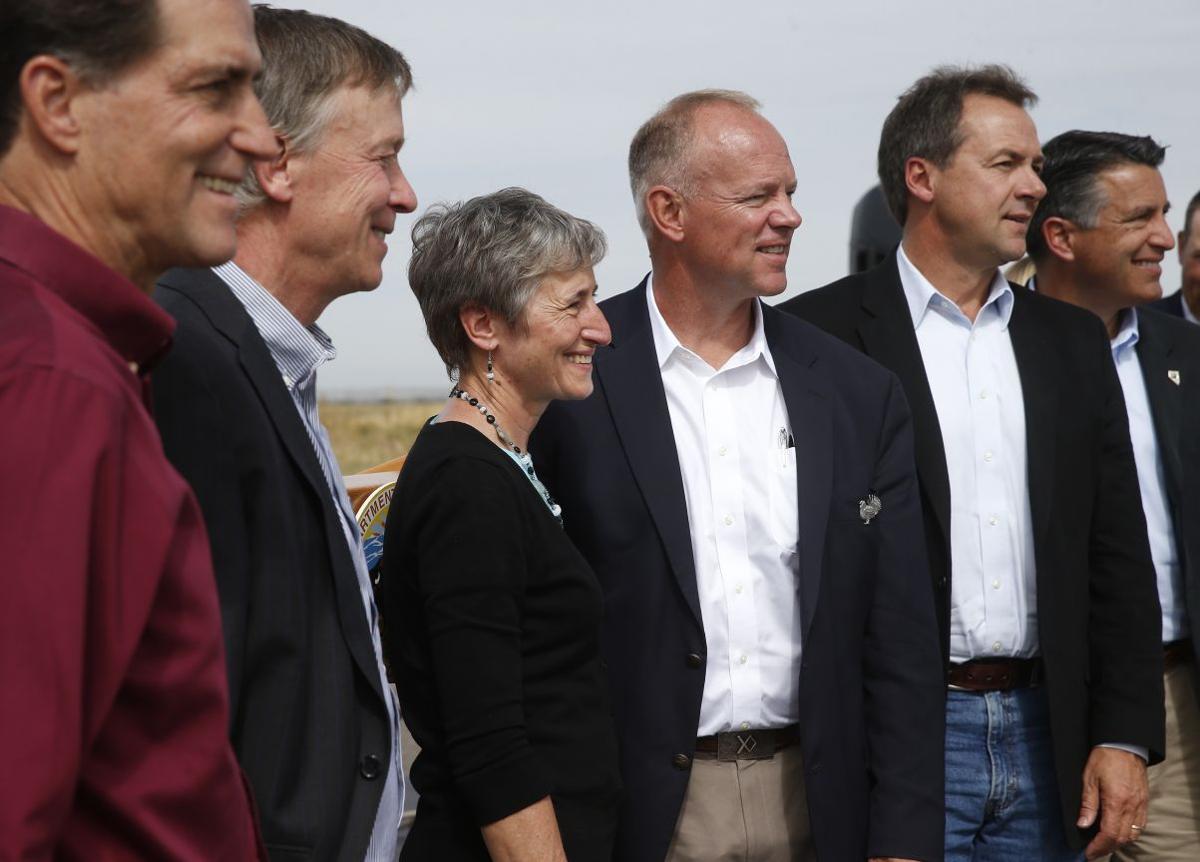 Sage grouse. A fat bird with riveting plumage that continues to disrupt the West. The birds are both a treasure and a challenge in states like Wyoming, where their declining numbers have brought to light the potential conflicts between vital industries and cherished wildlife in the sagebrush sea.

State and federal plans to protect the grouse staved off an endangered species listing in 2015 that would have greatly inhibited development of energy projects from oil and gas to wind. But that strategy may be changed under the Trump Administration.

With each news story, the lengthening history of the bird’s conservation in Wyoming is recapped, perhaps losing rich details in the retelling.

Here is a primer of sorts, a collection of key points on the sage grouse timeline, interesting facts or discoveries concerning the grouse and some of the most pressing issues in sage grouse management today in Wyoming.

No one wants it. Not the state, not the oil and gas companies, not the ranchers or the environmentalists.

Early one morning in September 2015,  Interior Secretary Sally Jewel announced the iconic sage grouse would not be listed as an endangered species. It marked, at the time, an end of a rocky political road. Amid the many pats on the back, sighs of relief and glowing statements about public and private partnership, the controversy over the grouse was momentarily sidelined.

But, conservation has been controversial. In many cases, the oil and gas industry has been the most frustrated. In others, ranchers have bristled about grazing limitations, while many environmentalists have argued that the plans fall short of protecting the bird.

In June, Secretary Ryan Zinke said he would review the plans. Though many voiced doubts over what a review would mean for the bird, the man may have had a point. There has been frustration and anger.

Environmentalists, ranchers and oil companies have found a rare point of consensus. All stro…

In Wyoming it’s “core." In the federal vocabulary it’s “priority." The words describe virtually the same thing: an area of sage grouse habitat where there are a lot of birds. The approach developed in Wyoming and largely adopted by federal agencies, is to find crucial habitat and surround it with the highest protections. Within those established boundaries saving the sage grouse is supposed to be prioritized. Outside those lines, oil and gas (and other industries) are supposed to be prioritized.

Since the "core" strategy was implemented in Wyoming in 2008, surface disturbance in those areas has dropped by 80 percent, according to the U.S. Fish and Wildlife Service.

The move to reduce noise, construction and boots-on-the-ground in the places where large numbers of sage grouse nest or mate has also coincided with changes in drilling practices.

As opposed to a decade ago, the majority of drilling now is directional, meaning wells are drilled straight down and then out horizontally for miles. The benefit for sage grouse conservation is that horizontal drilling reduces the amount of activity on the surface. Additionally more wells can be drilled from the same surface location, also limiting surface disturbance by cutting back on the number of roads needed in a field and the number of well pads on the landscape.

That's not to say the balance is easy to maintain, particularly in Wyoming, home to 37 percent of the bird's population.

According to a 2017 study by outdoor conservation group Backcountry Hunters and Anglers, about 10 percent of the birds priority habitat in Wyoming is currently leased for oil and gas. That's 3,005 leases, compared to more than 100 in Colorado, the second largest state by grouse population.

More than 30 percent of priority habitat in Wyoming has a high potential for oil and gas development as well.

Industry has been a key player in developing state and federal plans in Wyoming, advocating that the bird and their business can coexist. Jonah Energy, which is developing a 3,000 well project that will overlap with wintering sage grouse habitat, delayed its plans to build in greater protections for the bird during parts of the year.

A large gas project edges forward in southwest Wyoming. Can it share habitat with sage grouse?

However, an energy-centric ideology for federal land has some concerned that the bird's protections are being dismantled.

The federal push to open energy development on public lands resonates in Wyoming, where low …

How to trigger an environmentalist: Suggest managing to population targets

Conservation of threatened species over the decades has led to important discoveries about what works and what doesn’t. The heart of management today is widely considered to be habitat. Give the wild things a place to grow, and they will, say the biologists.

On the other end of the spectrum is the idea of managing to numbers. After all, the population is declining, so some say, the problem is one of mathematics.

The idea was floated more than once by Interior Secretary Ryan Zinke, who initiated a 60-day review of the federal plans in 2017, that ended with an open door to population targets if states so choose.

For the majority of sage grouse experts, population targets are a red flag, upending years of work to establish habitat-based thinking about wildlife. No matter how many birds are placed on the ground, the habitat will only support what it can. The rest of the birds will leave or die, they say.

Population targets have a fair share of dissenters including Wyoming Gov. Matt Mead, the Audubon Society and the Wilderness Society.

End of the line or ingenious? Farming the grouse

There is one other matter of contention about the grouse today -- whether it can be bred in captivity.

Though Wyoming has been the unquestionable leader of sage grouse management and sage grouse science, the state Legislature has also agreed to let game-bird farmers try this controversial approach.

It won’t necessarily save the grouse, but it couldn’t hurt either, proponents say. It could, say biologists, who fear a slippery slope towards privatized wildlife.

Captive breeding does have a place in species management. It’s a last chance move in the majority of cases -- once a species is likely to disappear.

2004 — Interior Department decides the greater sage grouse does not warrant an endangered species listing, despite reports of rapidly declining numbers

2007 — Wyoming Gov. Dave Freudenthal creates the Sage Grouse Implementation Team to come up with a strategy to save the bird

2008 — Freudenthal adopts the core area strategy: prioritize conservation in some areas, development in others

2010 — U.S. Fish and Wildlife decides the grouse warrants a listing, but delays decision

2011 — Lawsuit brought by environmental groups ends in settlement: the U.S. Fish and Wildlife must decide whether to list the grouse by 2015

2015 — Interior Department says the bird will not be listed, thanks to a reasonable expectation of success from state and federal management strategies

2017 — Interior Secretary Ryan Zinke says states were not given enough control over managing the bird, initiates review of federal plans

Sage grouse are eating dirt in Wyoming, and biologists want to know why

Before Gov. Matt Mead began explaining to officials in Washington D.C. how to manage an imperiled western bird, he made sure they noted his po…

Across Wyoming, fat birds with wild plumage are rising before dawn to attract a mate before the season ends. According to leaked documents fro…

The Bureau of Land Management proposed reducing oil and gas restrictions in Wyoming sage grouse habitat Wednesday, less than a year after Secr…

Nearly all upcoming federal leases for oil and gas in Wyoming — covering about 1.3 million acres — are in the habitat of a protected bird, con…

Sen. John Barrasso’s proposal to change the Endangered Species Act has shaken environmental groups already on the defense from the rollback of…

The narrow window allowing a Casper oilman to farm sage grouse in captivity hasn’t closed yet in Wyoming. But with a lone farmer yet to collec…

Discord prevailed Friday over an imperiled bird’s future in Wyoming, despite the official end of a one-and-a-half-year battle of words concern…

A flock of sage grouse crosses the sky just after sunrise Feb. 9, 2015 near Pinedale. An upcoming lease sale in southwest Wyoming may offer sage grouse habitat for drilling, to the ire of conservationists who argue that would break with federal rules. 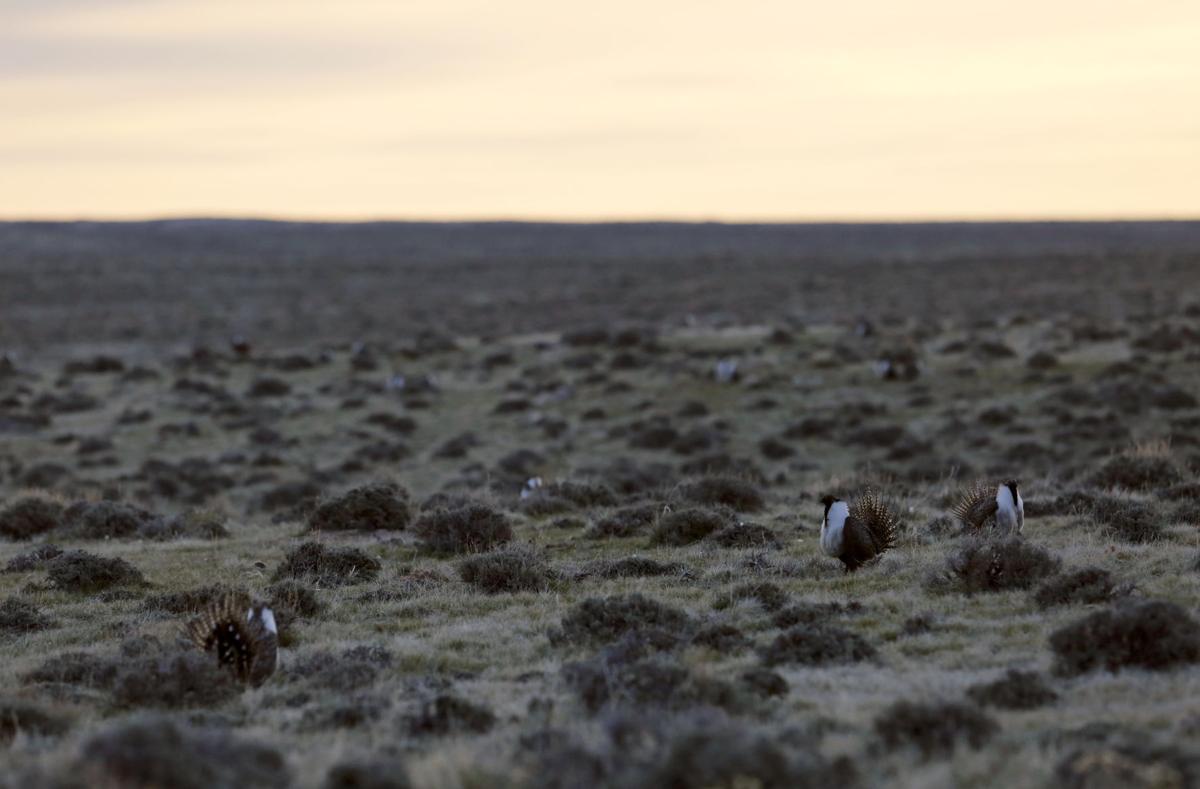