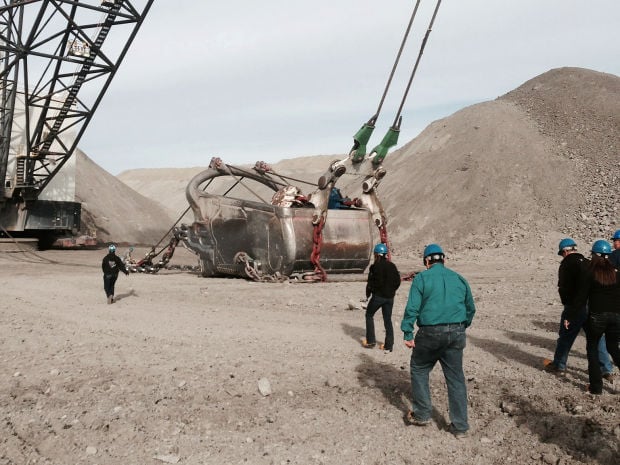 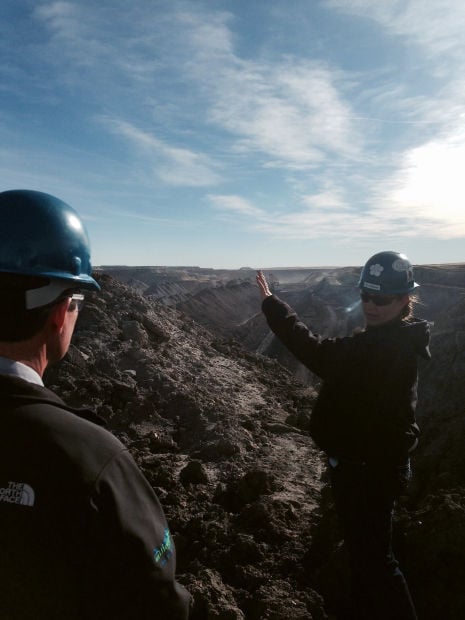 An Arch Coal employee at the Black Thunder coal mine points to a dragline in this 2014 file photo. The company reported a nearly $2 billion loss on Monday. 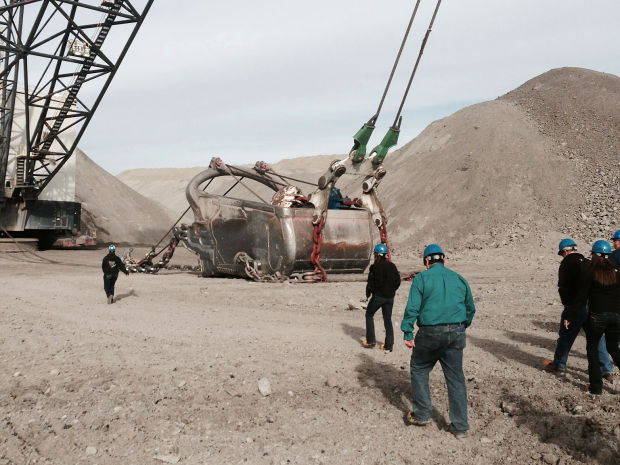 Arch Coal, the beleaguered mining giant, said Monday it may file for bankruptcy protection in the "near-term."

The announcement was made as part of the company's quarterly earnings report to the U.S. Securities and Exchange Commission and comes amid growing warnings from analysts about the miner's debts.

The St. Louis-based firm made no mention of a potential bankruptcy filing in a press release announcing its third-quarter earnings. The company's losses for the term amounted to nearly $2 billion.

But Arch executives acknowledged the need for the company to address its $5.1 billion long-term debts. Arch's total liabilities ($6.5 billion) exceed the company's total assets ($5.8 billion). It reported revenues of $688 million for the quarter, down from $742 million at the same time last year.

"As a result, Arch will require a significant restructuring of its balance sheet to continue to operate as a going concern over the long term," said Arch Chief Financial Officer John T. Drexler in a statement. "We are currently in active dialogue with various creditors with respect to a restructuring of our balance sheet."

The SEC filing went into greater detail. The company said bankruptcy remains a possibility even if lenders do agree to measures designed to alleviate Arch's debt burden.

"In either case, such a proceeding could be commenced in the near term," Arch wrote.

Arch's relationship with its creditors has been fractious in recent months. Senior lenders objected to a deal that would have cut the company's debt load by $990 million and slashed its annual interest payments by $94 million.

Offering a possible hint at the company's bankruptcy filing, Arch wrote that its creditors would recover little of their investment if it seeks Chapter 11 protections.

Self-bonds effectively amount to "I-owe-yous." Companies are not required to pay for bonds, provided they can prove financial health.

Wyoming officials have said Arch remains qualified for self-bonding because a subsidiary still passes the financial threshold to qualify for the program.

There were some positives amid the gloom for the miner. It reported cash reserves of $494 million, up from almost $440 million in the second quarter. Analysts have warned the company was burning through cash at a rapid rate.

Margins at Arch's Appalachian and Powder River Basin mines were up between July and September, thanks to falling production costs. The company received $13.28 per ton at its Appalachian mines in the period, compared to $2.97 per ton in the second quarter. Powder River Basin margins increased from $2.25 per ton to $2.97 per ton over the same time frame.

Production from Black Thunder and Coal Creek was 29.5 million tons. That was up from second-quarter output of 25.5 million tons and slightly below its third-quarter production totals in 2014, when Arch mined 29.3 million tons in the Powder River Basin.

But those improvements were not enough to overcome the dramatic downturn in the coal market. Weak demand and poor prices have already claimed three major mining firms this year, with Alpha Natural Resources, Patriot Coal Corp. and Walter Energy Inc. all filing for bankruptcy.

At the same time, stockpiles at U.S. power plants continue to rise. The trend is expected to dampen coal prices throughout 2016, the company said.

The weak pricing environment prompted Arch to write off two of its Appalachian mines as losses. The company concluded long-term operating costs exceeded cash flow at those facilities. The losses amounted to a $1.7 billion impairment charge to Arch's balance sheet.

An Arch Coal employee at the Black Thunder coal mine points to a dragline in this 2014 file photo. The company reported a nearly $2 billion loss on Monday.