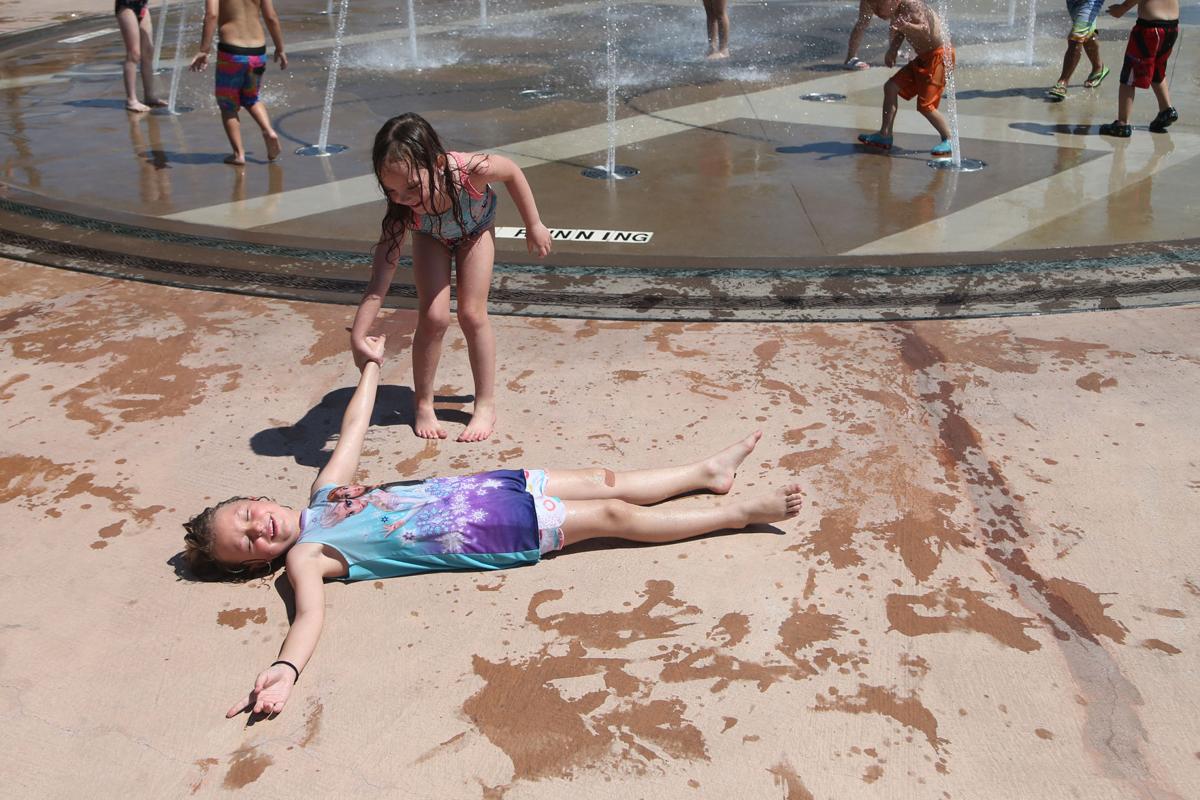 Hayden Peters lays on the pavement after playing in the splash pad at David Street Station on Wednesday in downtown Casper. Temperatures are expected to rise in again in Wyoming this weekend. 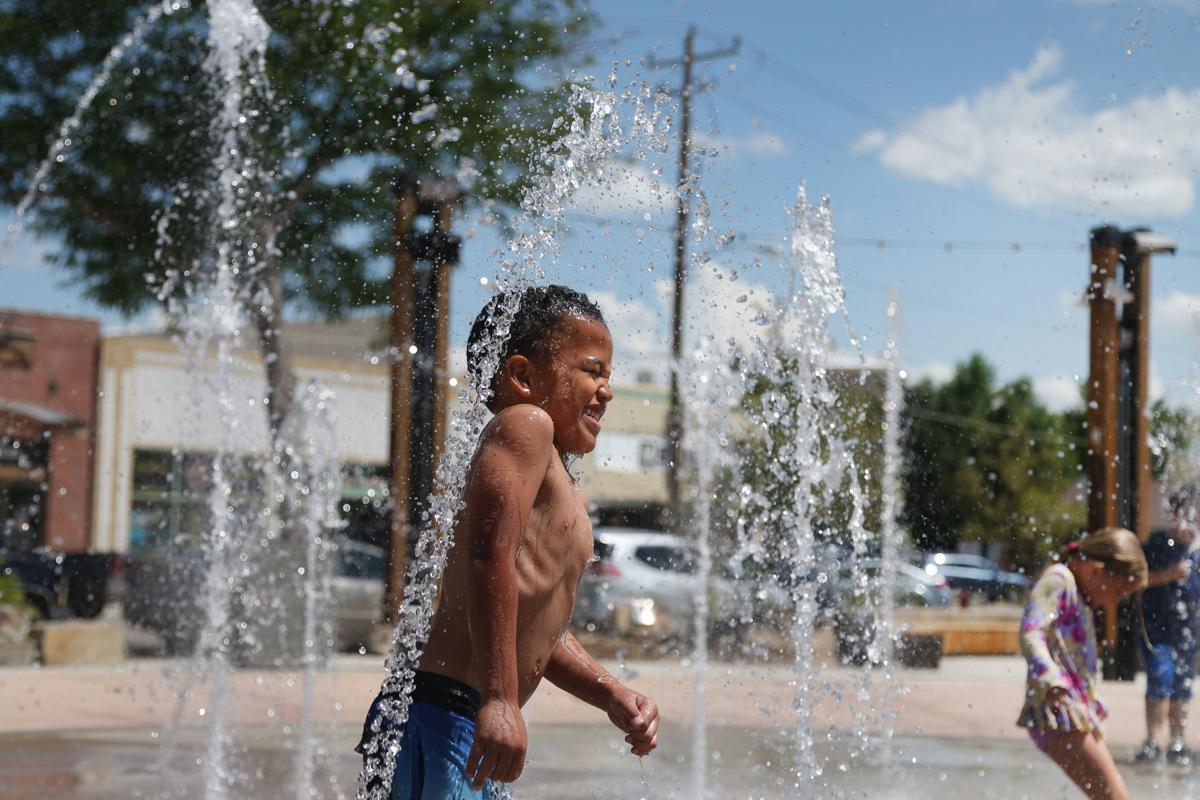 Dawjaun White plays in the splash pad at David Street Station on Wednesday in downtown Casper.

Rocky Mountain Power is confident it can handle the heat.

With temperatures expected to rise again in Wyoming this weekend — though not to such extremes as the record-breaking highs seen recently in the Pacific Northwest — Rocky Mountain Power, which supplies electricity to about 70 percent of the state, is prepared.

The utility’s practice of forecasting maximum electricity demand and upgrading its infrastructure accordingly means it’s equipped to keep the lights on and the air conditioning running, even on the hottest summer days.

“We know how our system’s going to behave, and we have years and years of data on how our customers are going to behave in hot weather,” said Tiffany Erickson, media relations manager for Rocky Mountain Power.

The utility’s forecasts aren’t analyzing weather patterns. Instead, they gauge maximum capacity — the electricity that would be needed if every building were to use as much energy as it could. Past weather patterns factor into its planning. So does climate change. Forecasting for peak demand means that when record-breaking temperatures do inevitably arrive, the electric grid will be ready.

Each fall, Rocky Mountain Power’s engineers review new developments to ensure that they’re accurately estimating those areas’ maximum electricity usage. If they identify distribution lines that could become overloaded during times of high demand, the utility will replace those lines in the spring, before the summer heat arrives.

“We do make a concerted effort to just educate customers on what they can do to save on energy costs in the summer, to conserve energy, but not because we’re looking at brownouts or blackouts or anything like that,” Erickson said.

New, high-density housing in populous places like Salt Lake City can be particularly vulnerable to overloading and blackouts when demand rises sharply. But in Wyoming, where people are fewer and farther between and electricity generation is readily available, that sort of overloading is rarely a concern.

The state’s power supply doesn’t share the vulnerabilities that have caused sweeping blackouts in other states, such as the power crisis in Texas this February, when a lack of infrastructure winterization coupled with skyrocketing demand for heat overwhelmed utilities.

Still, like in all mechanical systems, things will break, said Shane Sibrel, Rocky Mountain Power’s regional business manager. “But with the redundancies that we’re fortunate enough to have, it’s rarely an issue for us.”

Ingenious ways to earn income from your property

Ingenious ways to earn income from your property

Reasons opening a Health Savings Account (HSA) will save you

Reasons opening a Health Savings Account (HSA) will save you

“It is critical that we have adequate fuel supplies. This is particularly necessary for air support during this fire season,” Gordon said in a statement.

The Wyoming Game and Fish Department will issue 47 tags for the 2021 gray wolf hunt, down from 51 last year.

The current drought is the worst seen in Wyoming since 2013.

Oil and gas were core of Wyoming economy before pandemic, industry report finds

A report released Tuesday by the American Petroleum Institute found that in 2019, the industry directly supported 28,270 jobs — 6.8% of the state’s total employment. It generated 18% of Wyoming’s GDP and 17.3% of its labor income, including wages, salaries, benefits and proprietors' income.

A nuclear reactor is proposed for Wyoming. One small town hopes the plant will restore its economic fortunes.

Before the end of the year, developers of a new type of nuclear power plant will decide which of four Wyoming towns will house their project, and Glenrock wants to be selected.

After months of uncertainty and heated public debate, the Albany County Board of Commissioners voted unanimously on Tuesday to grant a key per…

Proposed nuclear plant could bring thousands of jobs to Wyoming

The Natrium nuclear power plant proposed for Wyoming could create 2,000 to 3,000 construction jobs and 300 to 400 permanent positions for workers.

Three proposed hydrogen pilot projects have been chosen as finalists for grant funding by the Wyoming Energy Authority, pending approval from …

Bearcat, which bid close to $1.2 million for approximately 100 Wyoming coal-bed methane wells in 2010, ceased known operations in 2016. It failed to provide nearly $200,000 in additional bonds requested by the commission in 2016 and stopped submitting production reports in 2017.

Coal production in Wyoming plummeted 21% in 2020 as the U.S. saw its lowest yield since 1965, the Energy Information Administration (EIA) repo…

Hayden Peters lays on the pavement after playing in the splash pad at David Street Station on Wednesday in downtown Casper. Temperatures are expected to rise in again in Wyoming this weekend.

Dawjaun White plays in the splash pad at David Street Station on Wednesday in downtown Casper.