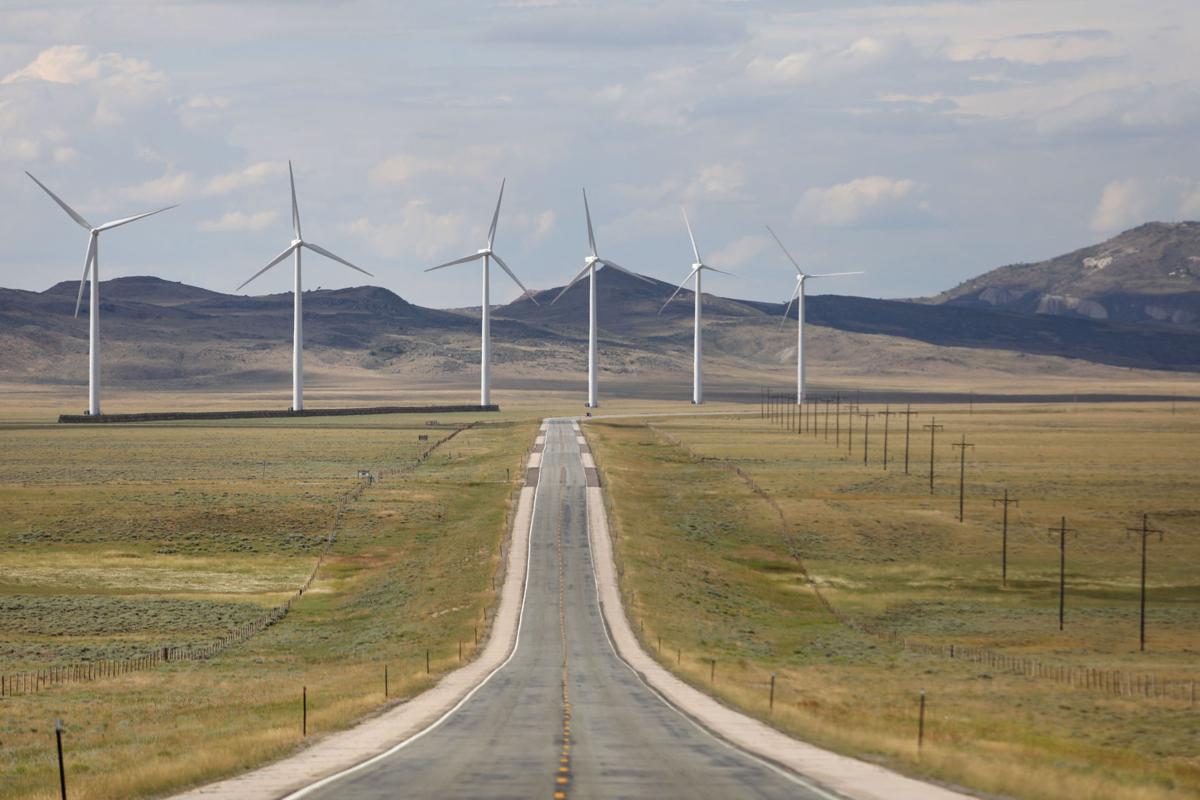 Wyoming Highway 487 leads to a line of wind turbines on Aug. 8, 2019, in the Shirley Basin north of Medicine Bow. Wyoming lawmakers narrowly voted to advance a bill last week to increase the electricity tax burden on wind energy producers in the state. 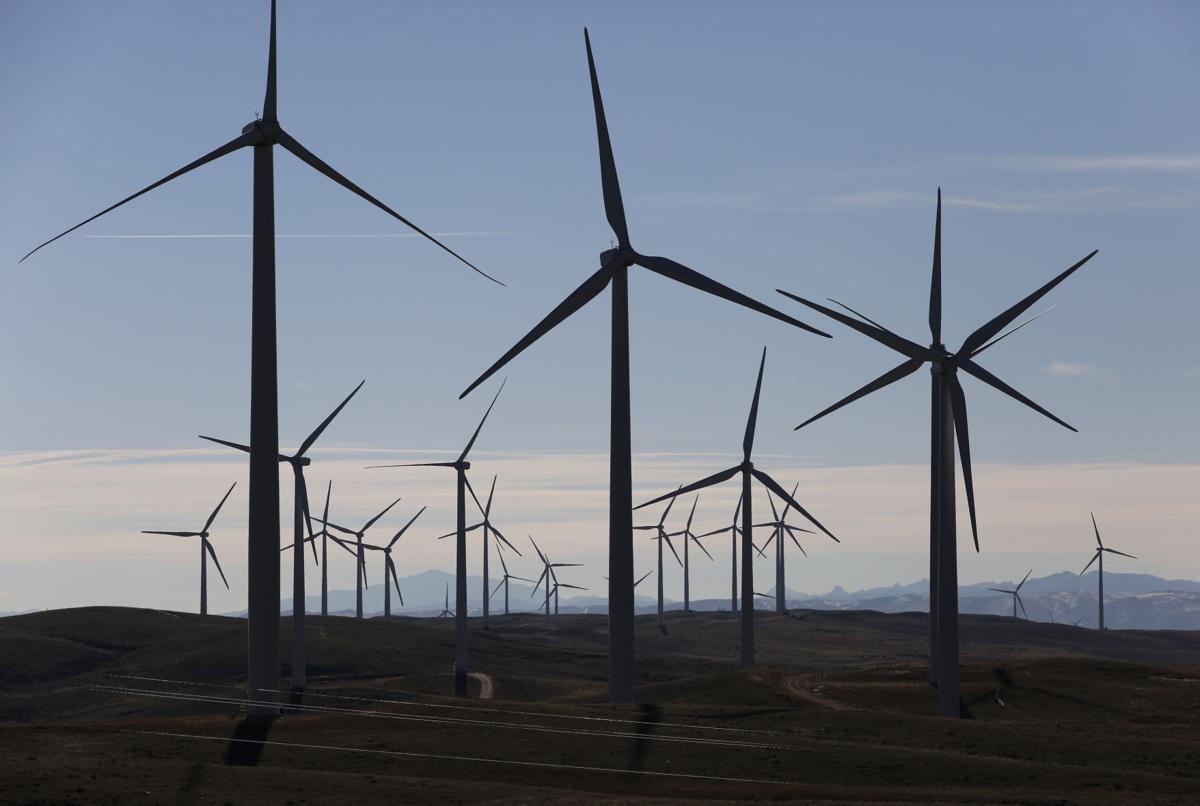 Wind turbines are shown in 2018 at PacifiCorp's multi-project wind development near Rolling Hills in Converse County.

Wyoming lawmakers narrowly voted to advance a bill last week to increase the electricity tax burden on wind energy producers in the state.

After impassioned public comment on the topic, the Legislature’s Joint Committee on Corporations, Elections and Political Subdivisions sent a bill to next year’s legislative session that would eliminate a three-year electricity tax moratorium available to new wind energy projects.

The change would eliminate the three-year grace period from the $1 per megawatt hour electricity tax now available to wind facilities.

Proponents of the tax hiatus have argued the move could drum up a much-needed alternate revenue stream for the state during a ballooning fiscal crisis brought on by the coronavirus pandemic and a downturn in the fossil fuel industry.

“With the current fiscal difficulties facing the state as coal is phased out, the state should make every effort to collect from every source possible,” Wyoming resident Miria White told lawmakers in support of the drafted legislation.

But the renewed possibility of changes to wind energy regulations has sparked concern among the state’s utility companies, independent power producers and other renewable energy supporters. Many say the exemption repeal would hike costs for consumers, create regulatory barriers and severely deter renewable energy investment in the state.

The Wyoming Business Alliance, Cheyenne Chamber of Commerce, the city of Rawlins, the Carbon County Council of Governments and several other groups opposed the legislation. Any increased tax burden on developers makes projects less competitive in the region’s cutthroat energy market, they said, and deter future investment in the state.

“I’m not here to say that any wind tax in Wyoming will kill projects or drive them out of state, but I know it will hurt competitiveness,” Wyoming native Ryan Fitzpatrick said. He works for NextEra Energy, a renewable energy company responsible for building multiple wind projects in Wyoming. “Every incremental tax increase on the wind industry makes the state less competitive.”

Some residents and local construction companies also stepped up for public comment to express their opposition for the bill at the committee meeting.

When the Wyoming Legislature instituted the tax about a decade ago, it built in the grace period for budding renewable energy projects by waiving the generation tax for the first few years of a developer’s operations. Wyoming also levies sales and use taxes and property taxes on wind generators.

Wednesday’s discussion marked the 15th time the Legislature had raised the topic of taxing wind energy in interim committee meetings since 2009.

Sen. Tara Nethercott, R-Cheyenne, voted against the repeal, but managed to introduce an amendment at the final hour to grandfather in existing wind projects.

“I want to make sure that if this bill does pass, that it’s passed in a way that protects those projects currently underway,” Nethercott said.

“We want to send a clear message that Wyoming is a place to do business that is stable, reliable and consistent,” she added.

Nethercott moved to “adopt the staff comment for the recommendation to grandfather in those projects currently underway.”

The amendment would specifically “allow existing turbines to continue to benefit from this tax exemption for a turbine that is or will become operational before July 1, 2021,” according to the Legislative Service Office comment in the draft bill.

How you can find and put money into 'recession-proof' investments

How you can find and put money into 'recession-proof' investments

Tax the super wealthy? Wyoming lawmakers pass on the idea.

Lawmakers disagreed with a pair of proposals that aimed to address Wyoming's revenue shortfall by taxing the state's wealthiest residents.

Without federal incentives or the state's blessing in the form of a stable tax environment, some energy developers say making a wind project happen in Wyoming over the next decade might be tough.

House Bill 94 would place a $1 tax on each megawatt hour of electricity produced from larger solar energy facilities in the state.

Wyoming Highway 487 leads to a line of wind turbines on Aug. 8, 2019, in the Shirley Basin north of Medicine Bow. Wyoming lawmakers narrowly voted to advance a bill last week to increase the electricity tax burden on wind energy producers in the state.

Wind turbines are shown in 2018 at PacifiCorp's multi-project wind development near Rolling Hills in Converse County.