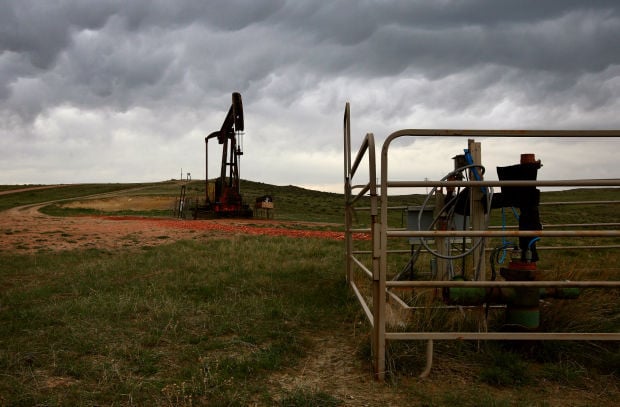 A coal bed methane well, right, and an oil pumpjack sit side-by-side May 5, 2014, on the Barlow Ranch west of Gillette. 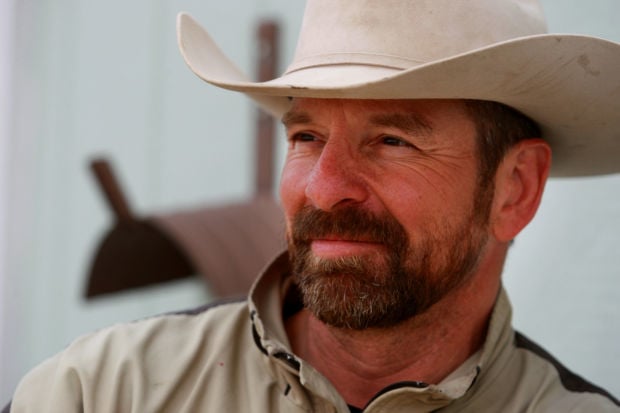 Rancher and Wyoming lawmaker Eric Barlow is pictured May 5, 2014, outside his home on the Barlow Ranch west of Gillette. 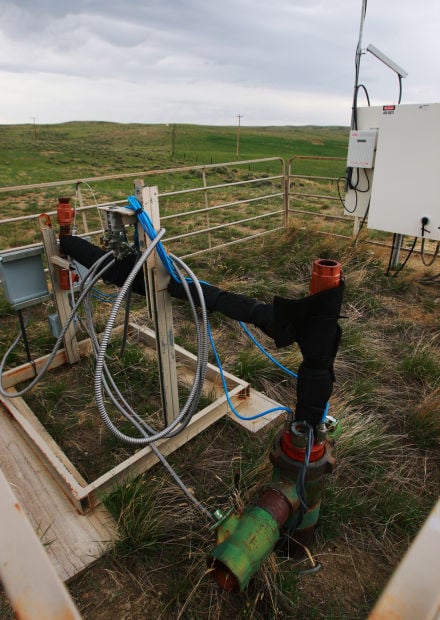 A High Plains coal bed methane well is pictured May 5, 2014, on the Barlow Ranch west of Gillette.

Eric Barlow looks forward to the day Wyoming regulators arrive at his Campbell County ranch and plug the five coal-bed methane wells abandoned by High Plains Gas, a Sheridan company that went out of business earlier this year.

But while Barlow has some hope of seeing the five wells drilled on state mineral leases reclaimed, seven High Plains wells sitting on federal mineral leases face an uncertain future.

The U.S. Bureau of Land Management, which regulates the federal mineral estate beneath Barlow's property, does not considered the High Plains wells officially abandoned and has no immediate plans to clean them up.

The wells' diverging paths highlights the emerging chasm between the state and federal governments' approach to thousands of wells left scattered across northeastern Wyoming by a bust in coal-bed methane production.

Wyoming considers a well without an owner "orphaned." Last year, using forfeited bonds and taxes on oil and gas production, the state embarked on a multi-year effort to plug what is now more than 3,800 coal-bed methane wells on state and private land.

The BLM, meanwhile, says it doesn’t have any orphaned wells in northeast Wyoming. Federal officials consider more than 4,000 nonproducing coal-bed methane wells on BLM land “idle.” If a company goes out of business, the BLM will find who sold to the bankrupt firm and ask them to pay for the reclamation. However, that process often takes years, if not decades, and the bureau does have not money set aside for cleanup.

For surface owners like Barlow, whose land sits atop the federally managed minerals, the inaction can be exasperating.

“As a landowner, you’re buried in a hard place,” he said. “And they stuck a rock on top of you.”

Coal-bed methane was going to be the answer to Wyoming’s slumping oil-based economy. Companies flocked to the Powder River Basin in the late 1990s and early 2000s, when the promise of big money was available to anyone with a dream and ability to work hard.

But by the late-2000s, the boom became a bust. Cheaper, abundant natural gas flooded the market from other parts of the country, leaving little money to be had in the Powder River Basin.

Companies left the region or went broke, leaving their wells behind. Concerns grew about about abandoned wells and their potential to pollute aquifers used for drinking and irrigation.

“These wells can be a conduit for groundwater contamination when the casing starts to fail,” said Jill Morrison, an organizer with the Powder River Resource Council. “They are a source of noxious weeds. They are a blight on your land.”

Much of the problem is rooted in the split estate, where one party owns the surface and another owns the minerals underneath.

If an oil or coal-bed methane company wants to drill in federal or state minerals, the company needs to apply for a lease from either the state or the BLM. At that point, it’s up to the company to negotiate with landowners for access and payment for land use, though ultimately the company has first rights, said Barlow, a veterinarian who also represents parts of Campbell and Converse counties as a Republican in the state Legislature.

Wells are often passed from one company to another, particularly as they become less productive or the market tanks. Smaller companies buy them and cleanup becomes more expensive. Sometimes the last company holding the lease runs out of money, Barlow said, leaving the well essentially stranded with no one to clean it up. Bonds held by the state are intended to cover the costs of reclamation if a company goes out of business, but they often do not cover the cleanup, he said.

The state and federal land management agencies overseeing much of Wyoming’s coal-bed methane development have taken two very different approaches to its reclamation.

Of BLM’s roughly 15,660 coal-bed methane wells in the Powder River Basin, 7,519 are still producing. The rest are broken down into various categories, including temporary abandonment and reclamation.

In the mix are 4,079 “gas well shut ins,” the BLM's term for idle wells that are not producing and also not in the process of being reclaimed, said Bennett, the BLM’s field manager.

Those wells are either waiting for production pipelines to be fixed, or for the “economics of the situation to be turned around,” said Jonathon Shepard, a petroleum engineer in the Buffalo Field Office.

BLM officials generally contact a company after a well has sat idle for between a year and several years depending on the situation. Eventually, they tell the operator to either plug or produce, Bennett said. He said he does not have a timeline of how long wells could sit idle before the government steps in and plugs them.

“Today, as far as I know, BLM Buffalo, we don’t have any orphan wells, which are wells that the operator and the record title owner of the land have walked away from,” Shepard said. “BLM Buffalo doesn’t have any of those in this area. All our wells we have either contact with the operator or the title owner for either maintaining, producing or plugging operations.”

If a company no longer exists, the BLM plans to search the lease records for previous title holders still in existence. And if a viable company can’t be found, the government will plug the wells, though the BLM does not have money right now to pay for well-plugging. If it needs to find money, Bennett said the BLM would have to go through the budgeting process.

A former representative of one defunct company said the BLM is still trying to contact it to discuss its wells.

High Plains went out of business earlier this year after the state seized 2,300 wells owned by the company. That left High Plains with about 600 more wells on federal leases, but it was not enough to keep the company afloat, said former High Plains CEO Ed Presley.

The BLM is still sending emails and letters to the company, Presley said.

“I’ve written them and said the state put us out of business," he said. "End of story.”

BLM is aware of the High Plains wells and treats each one differently, Shepard said. Federal officials have begun sending letters to earlier title holders for some of the wells, and is still contacting High Plains for other wells depending on where the wells sit on the BLM’s inspection list.

“Every oil well is a snowflake, every situation is unique,” Shepard said. “What we can say is we are aware of the problem ... We’re not going to let any wells slip through the cracks.”

The state of Wyoming, on the other hand, tells a different story. In response to thousands of what it calls orphan wells, the Wyoming Oil and Gas Conservation Commission decided it needed to begin plugging wells to prevent possible water contamination, said Tom Kropatsch, the commission’s deputy supervisor.

The commission pulled bonds on companies which abandoned wells. And, together with taxes collected on oil and gas production, the state began plugging. Engineers with the Oil and Gas Commission have plugged 428 of the 1,200 wells originally on the state's orphaned list, Kropatsch said. The state's list grew to roughly 3,800 this year after regulators claimed wells owned by High Plains and another struggling operator, Black Diamond Energy.

The state estimates coal-bed methane wells cost about $6.50 per foot to plug with a series of layers of bentonite, cement and mechanical, iron devices called bridges. The entire project may cost more than $32 million and will take four to six years to complete.

Wyoming’s commitment to clean up wells on its land and leases is good news to landowners like Barlow. At least some of the wells will be reclaimed, even if it’s a long road ahead, he said.

Barlow hopes his federal wells will one day be plugged. The questions are if and when.

The full June-July edition of Energy Journal, produced by the Star-Tribune.

Open prairies vs. open roads: BLM ponders what to do with coal-bed methane roads

There’s not a lot to see if you’re driving along Interstate 90 between Buffalo and Gillette. The burnt-peanut colored hills rise out of dusty …

A coal bed methane well, right, and an oil pumpjack sit side-by-side May 5, 2014, on the Barlow Ranch west of Gillette.

Rancher and Wyoming lawmaker Eric Barlow is pictured May 5, 2014, outside his home on the Barlow Ranch west of Gillette.

A High Plains coal bed methane well is pictured May 5, 2014, on the Barlow Ranch west of Gillette.