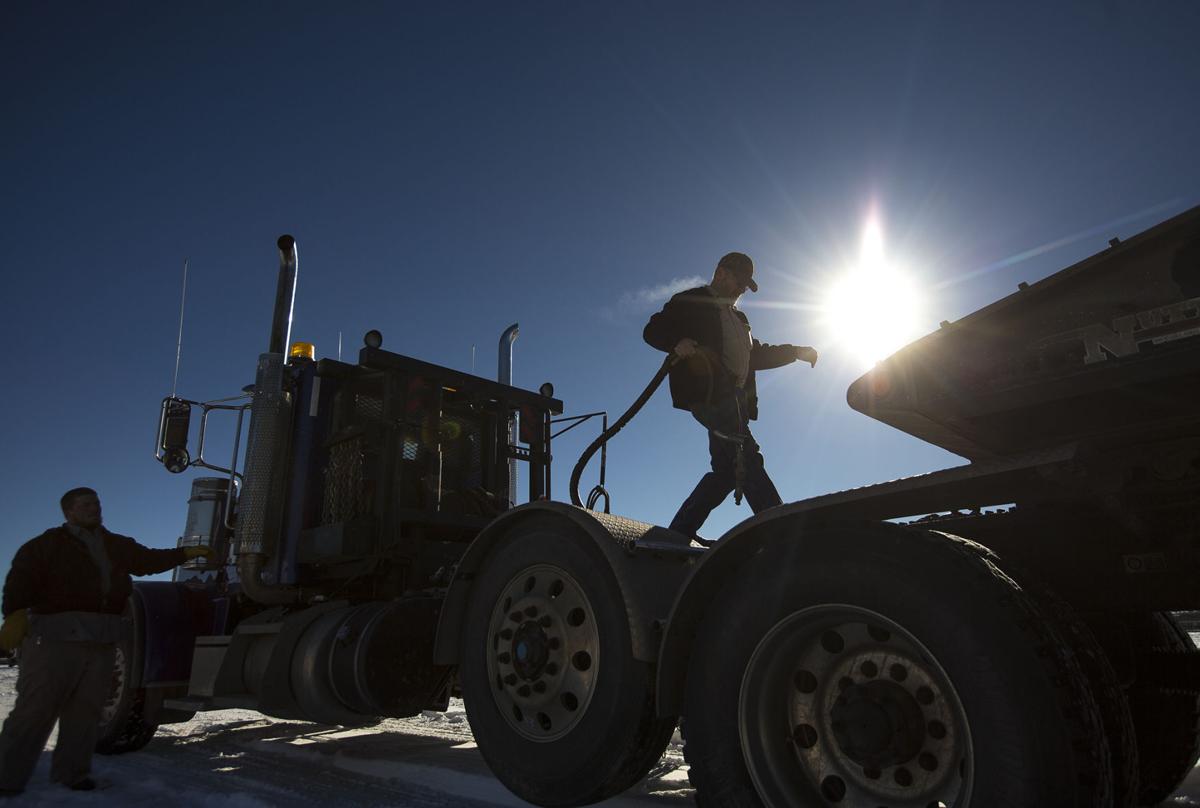 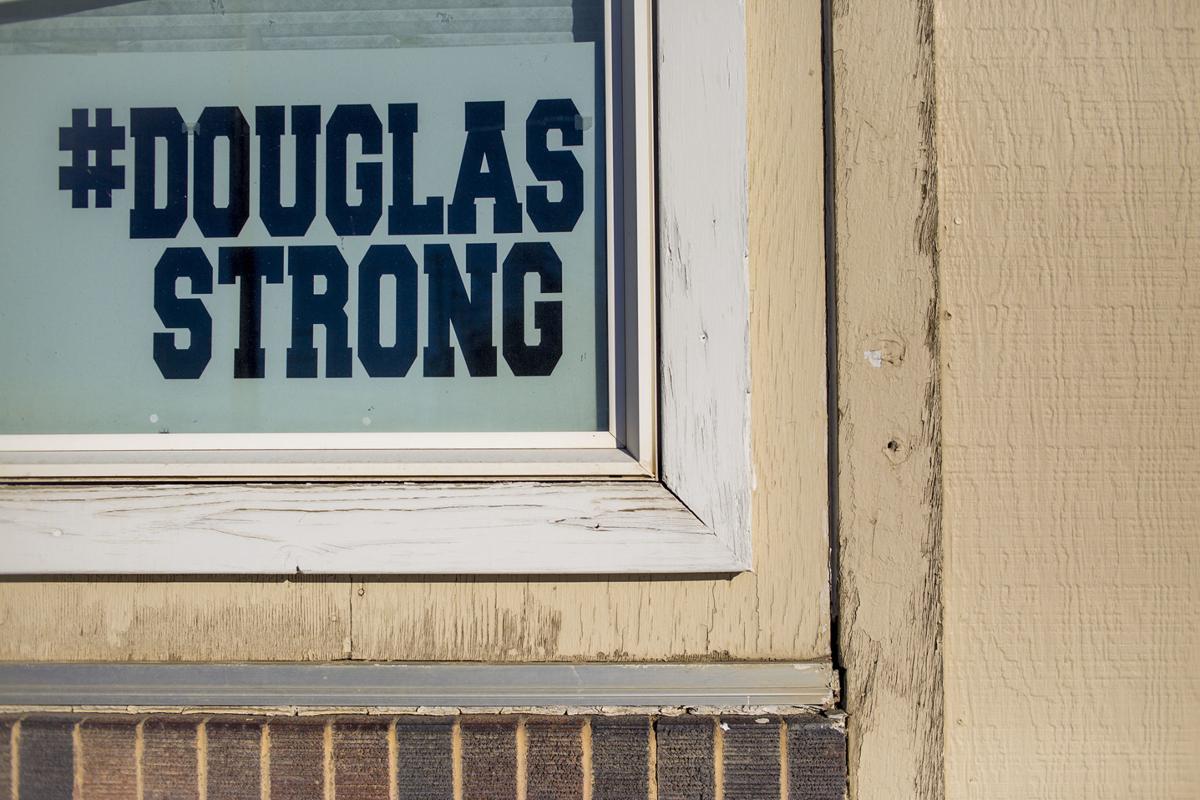 A "#douglas strong" sign hangs in the window of a business Jan. 4, 2018, in downtown Douglas. Local businesses are looking to pick up the slack left by Shopko's departure from the town. 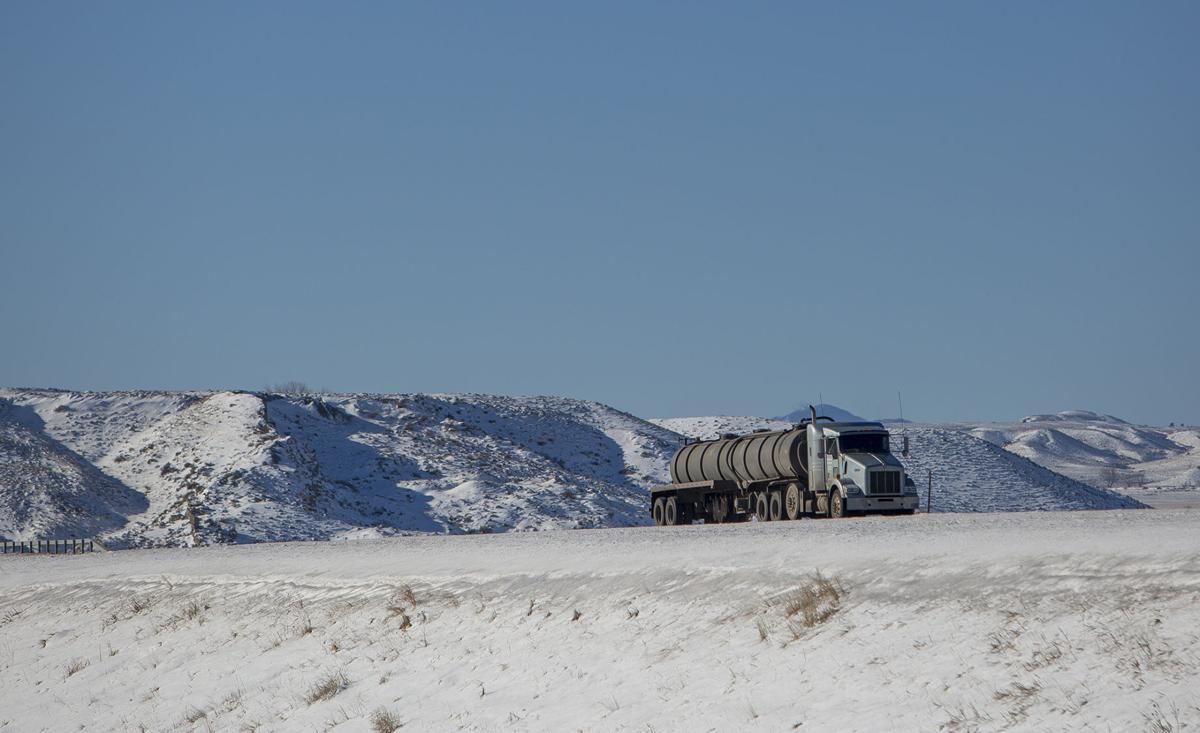 A truck drives Jan. 4 out of Douglas. 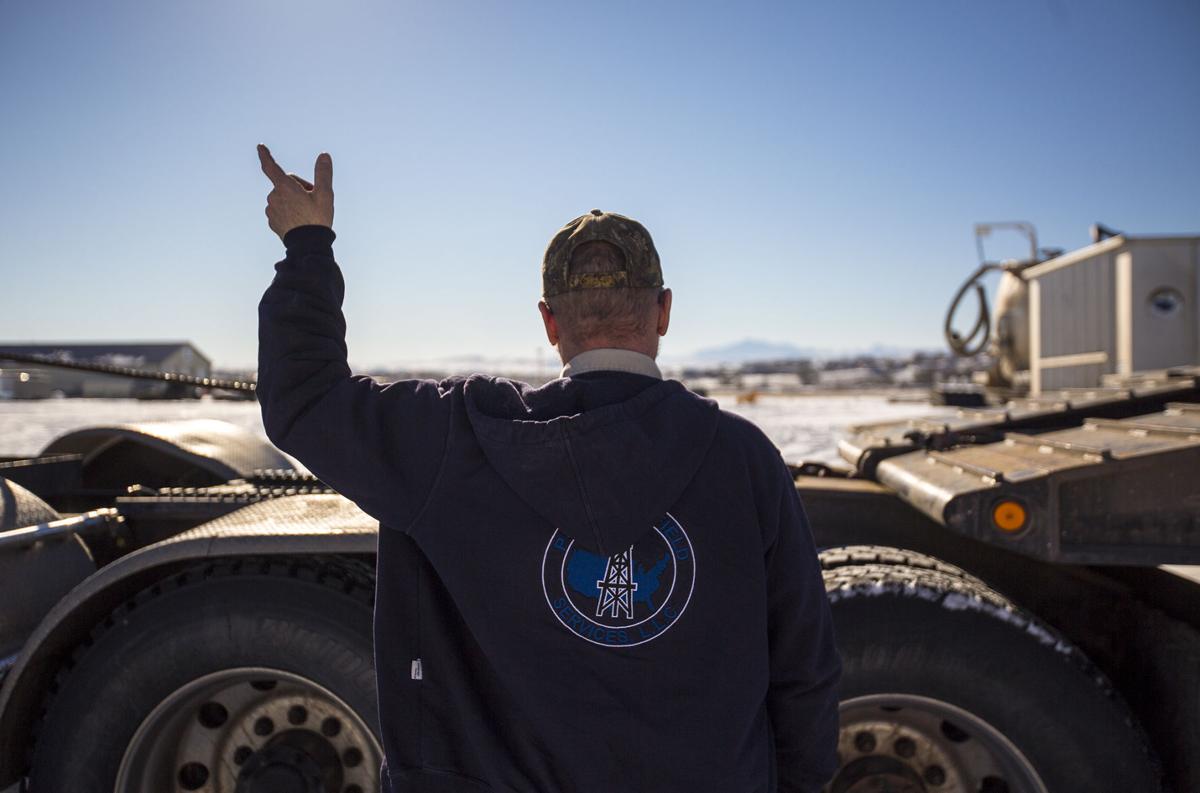 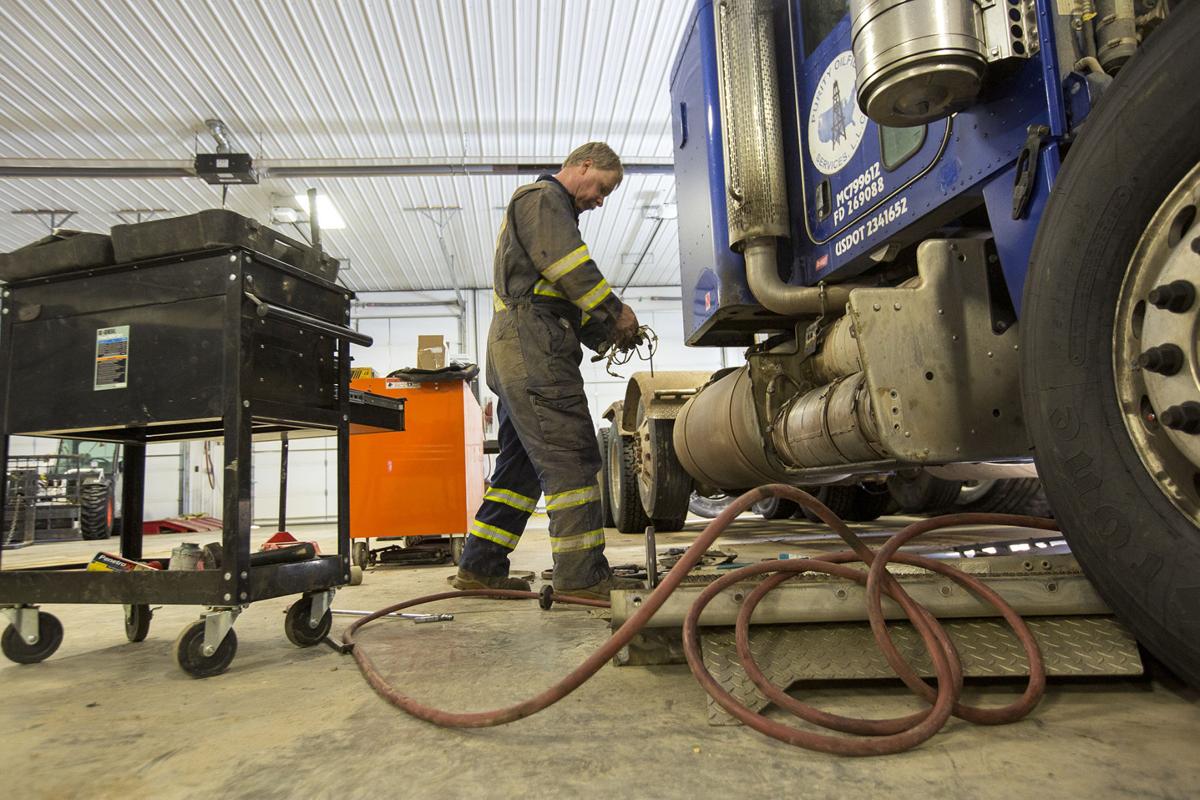 Craig Swilly leaned out of a small work truck, his foot crunching through the layer of ice-packed snow covering Purity Oilfield Services yard outside Douglas.

“Steady picking up,” he said of the oil fields that his company serves. “They’re starting to drill more and fracking more. I’m glad to see it.”

Converse County, a gently hilled landscape of ranches, sits above a layer cake of rock formations rich in oil. When the price of crude shot over $100 a barrel a few years back, interest in Wyoming’s Powder River Basin peaked. Industry development hit Douglas like a storm. With it came revenue that pushed the county’s overall value up to $1.8 billion, the highest it had ever been. It also brought people, more than the town could house and support.

Campers lined the streets, filled the county fairgrounds and the nearby camping spots. A rush of kids hit classrooms that were funded for fewer students.

Then the price of oil fell by half. Oil production in the county dropped by 6.5 million barrels from 2015 to 2016. And the influx of workers that had come to stay moved on. Their children disappeared from classrooms. The boom left a windswept Douglas quieter, smarting from the good and the bad of sudden prosperity.

In Douglas these days, there are signs of an uptick, and whispers that the boom times are ahead.

School districts are still distracted with the fallout from the bust. Industry workers, like Swilly, are excited to see the business return. And most are eager to see the new revenue, the fiscal relief that comes along with a healthy oil and gas field.

What everyone in Douglas appears to agree on is that a slow increase is better than a sudden one.

Converse County Assessor Dixie Huxtable has seen a gradual uptick in the oil business, and has heard of an even bigger one. The number of applications to drill in her county jumped in the last year. Companies are looking to drill. One firm, she heard, had 2,000 applications in for Converse.

There are other signs: Sales and use dollars.

About three months from now, in early spring, she’s expecting more people to start showing up in Douglas.

“How that plays out to John Doe public, time will tell,” she said. “Last time we had it, it was nuts around here.”

She said she didn’t want to go back to that. Locals don’t like the traffic and crime increases that come with a sharp boom. She is hoping for a steady swell.

People who’ve been in Douglas for awhile have been through downturns, and they’ve learned. Many service companies, for example, survived this bust, she said.

“They did really well, because they were smart enough, had lived through it once before,” she said. “The guys that came to make a fast buck, they’re gone.”

But it’s likely that those folks will be coming back, and soon.

Signs of a boom are welcome to most, but the schools in Converse County have struggled with both sides of being an industry county.

When the region was booming, the schools were turning to the state for help because they were growing faster than their budget. Now they’re in the opposite corner.

Wyoming guarantees its schools a certain amount of funding for each student in the district. How the schools use that money is somewhat flexible, but the dollar amount comes down to the number of seats filled on average per year.

And the funding system is built to ease the booms and busts that impact enrollment numbers. Funding is based on either the previous year’s average daily attendance, or an average of the last three years, whichever is higher.

It slows the funding decline over a period of time. The state, dealing with the same revenue retreat as Converse County, has also made cuts to education.

“A certain influx (of students) would be good,” the principal said. “Because we’ve lost enrollment, we’ve lost revenue.”

However, Douglas is about to face a bite in funding just as enrollment could go back up.

In one week in early January, the school had fielded three calls from families looking into Douglas.

Schools are also looking at booms and busts from a classroom perspective. Both are a challenge in Douglas for teachers and kids.

“I think you see the effect that it has on the kids,” said Natalee Brace, a fifth grade teacher.

During the downturn, kids come to school looking for answers to adult questions, like why a parent lost their job. Kids witness stress at home, and it’s visible when they walk into school, she said.

During the boom, it’s “a revolving door,” she said.

She had a student come to class after spending the first two weeks at a Glenrock school. After a month in Douglas, the kid moved again.

And the teachers worry about those students, where they’ve gone, how they are faring in their next school.

The uptick is not just down to oil. Converse County has pipelines, plants, uranium, oil and gas. It also has coal.

Cloud Peak’s Antelope coal mine sits in Converse County. Some years, Peabody’s North Antelope Rochelle mine dips down over the county line too, though not this year. But even with one mine, the county earns millions from coal and also lost millions when coal busted.

For Huxtable, the county assessor, Converse has benefited so much from energy in the last few decades that it’s hard to complain even in a downturn.

In 1999, when she was first elected to office, the overall value for the county was $272 million.

“And everybody was panicking because the sky was falling,” she said. “I just look at this historical chart and think: ‘Put your life in perspective.’”

This coming year, she’s estimating the county valuation will rise by about $500 million, mostly due to energy development.

Tim Willman spent the bust in Billings, Montana. He saw the writing on the wall as the downturn approached and sought work elsewhere. But he’s back in Douglas now, with his wife and kids, working at Purity Services, a water hauling company.

Willman said his family was one that spent a lot of money when they got into the oil business. He’s a mechanic, but once he was in the oil fields working on the big trucks that service the industry. His paycheck tripled, and he was hooked on a job where 70-hour weeks are the norm.

Max Goodroe graduated from college three years ago and headed west. He had no intention of joining the oilfields. He worked construction and bar gigs before joining Purity Oilfield Services, and like so many young men in Wyoming he found that the oil and gas industry clicked for him.

Purity has about 25 employees in Wyoming and 300 nationwide. They actually grew during the bust, said Goodroe.

There’s no question the industry is improving, Goodroe said. Purity could comfortably triple its workforce in Wyoming to meet the amount of work currently coming in, he said.

But like the county assessor, Goodroe said it’s better if the coming boom is a steady increase rather than a boom. He arrived in Douglas just as things started to turn sour. He saw how crazy it was, and how fast it dropped.

“You have a pretty sleepy town here in Douglas,” he said. “When you go ahead and double that population with what could be best described as migrant-type workers … it raises some issues.”

For Goodroe, both the community and the industry are on the cusp of a “happy medium,” where businesses can make money and the town can weather the changes. From a business perspective, too, he said steady is preferable.

“When you have a gradual increase, you can build (your business) gradually,” he said. “It gives you time to prepare … it gives the community time too, to build up and prepare for it.”

Wyoming oil is saving the day, something that hasn’t been said for more than two years. State revenue forecasts are improving. The oilfield se…

The highs and lows of a year in Wyoming oil

The price of crude is set to end the year about $20 lower than it began, undermining what had been a consistent comeback streak for the busine…

A "#douglas strong" sign hangs in the window of a business Jan. 4, 2018, in downtown Douglas. Local businesses are looking to pick up the slack left by Shopko's departure from the town.

A truck drives Jan. 4 out of Douglas.