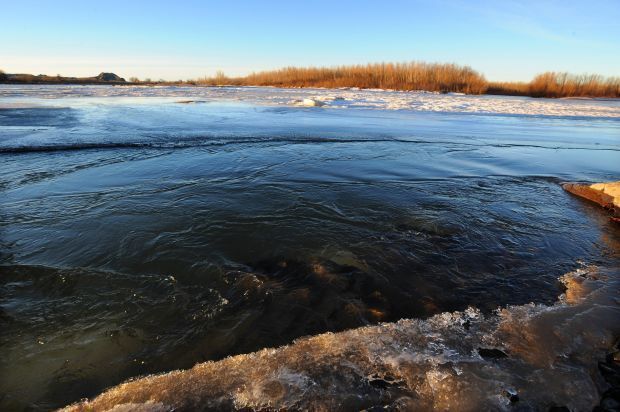 In this 2015 photo, water flows past Glendive, nearly a week after Bridger Pipeline's oil spill in the Yellowstone River. Pipeline breaks on frozen rivers are rare. 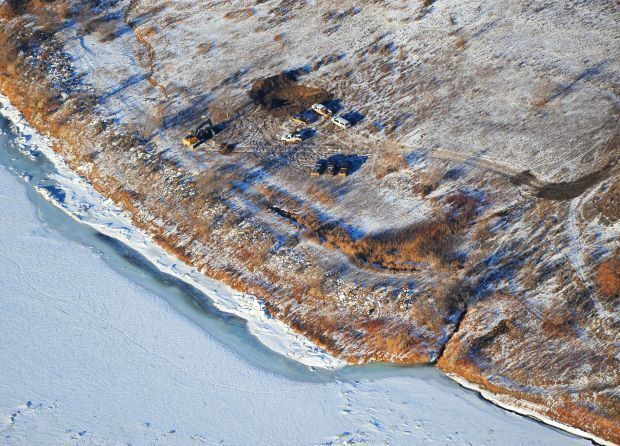 In this 2015 file photo, crews work to contain an oil spill from Bridger Pipeline's broken pipeline near Glendive, Montana, in this aerial view.

A Wyoming oil company has agreed to pay a $2 million settlement for damage to the Yellowstone River following an oil spill upstream from Glendive, Montana, according to court documents filed Wednesday.

Bridger Pipeline LLC agreed to settle a civil complaint filed by the United States and Montana to help pay for the harm inflicted on the longest, free-flowing river in the Lower 48 states by the release of 31,000 gallons of crude oil from a pipeline that ruptured in 2015.

In January 2015, the pipeline running beneath the Yellowstone River about 6.5 miles upstream from Glendive cracked at a weld. The pipeline, 12 inches in diameter and buried about eight feet under the river, carried oil from the Bakken region of Montana and North Dakota, The Billings Gazette previously reported.

Soon after, residents in Glendive found their water to be undrinkable, and switched to bottled water. A subsequent investigation by the Environmental Protection Agency found benzene, a known carcinogen, at more than three times the limit for long-term exposure risk present in Glendive’s drinking water. Oil sheens were seen as far away as Williston, North Dakota, and the ice on the surface of the river hindered containment efforts.

Bridger Pipeline, based out of Casper, has previously paid for the spill response conducted by the Montana Department of Environmental Quality. The company paid a $1 million civil penalty to the state, along with $100,000 for monitoring equipment at the Glendive water treatment plant.

A consent decree, filed along with the civil lawsuit Wednesday, requires Bridger Pipeline to pay $2 million in damage claims. The bulk of those funds, about $1.8 million, will be managed by the State of Montana, specifically for restoration efforts determined by federal and state trustees. The remaining settlement amount will go to the U.S. Department of the Interior.

In July 2011, The Billings Gazette reported that a crack in a pipeline below the Yellowstone River near Laurel, Montana, resulted in 63,000 gallons of leaked oil seeping downstream for about 80 miles. Exxon Mobil Corp. eventually paid a $12 million settlement to cover the damages.

Carbon capture may not be coal’s savior. But it could spawn an industry all its own.

Wyoming could benefit from the growing carbon capture and storage industry -- even if it doesn't save coal.

Climate change isn’t what’s driving some U.S. coal-fired power plants to shut down. It's the expense of stricter pollution controls on their wastewater.

Jonah Energy has been recognized by the United Nations for its ongoing efforts to tackle a tricky pollutant.

A team of University of Wyoming students won $100,000 for a carbon soil monitoring project this month through the Carbon Removal Student Competition.

TerraPower thinks it can bring a new type of nuclear reactor to Wyoming. The state hopes it can. Experts are divided.

The prospect of getting an advanced nuclear reactor has injected new optimism into a community used to weathering the booms and busts of the state’s energy industry.

WASHINGTON — A Democratic plan to impose a fee on methane emissions from oil and gas wells has cleared a key hurdle, but it faces strong opposition from the oil and gas industry and criticism by centrist Sen. Joe Manchin.

Biggest US coal plant, a Powder River Basin customer, will cut generation in half

In this 2015 photo, water flows past Glendive, nearly a week after Bridger Pipeline's oil spill in the Yellowstone River. Pipeline breaks on frozen rivers are rare.

In this 2015 file photo, crews work to contain an oil spill from Bridger Pipeline's broken pipeline near Glendive, Montana, in this aerial view.