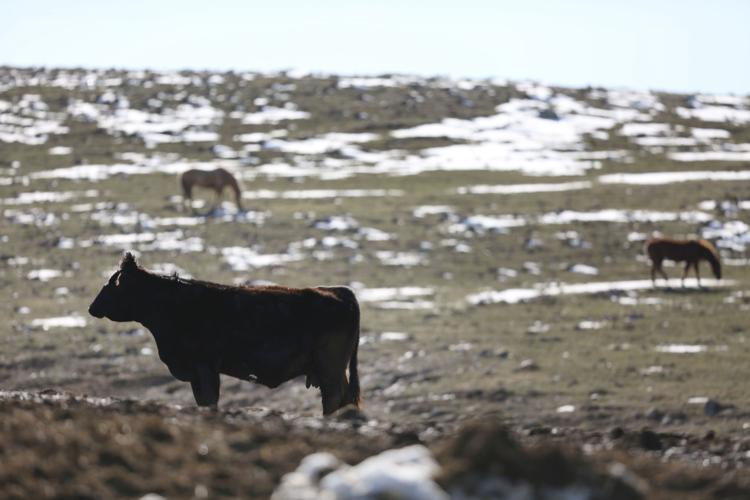 A herd of cattle and horses feed on a ranch in April in Casper. Legislation introduced by Rep. Liz Cheney aims to limit the federal government's ability to assume ownership of private land under a Biden administration executive order. 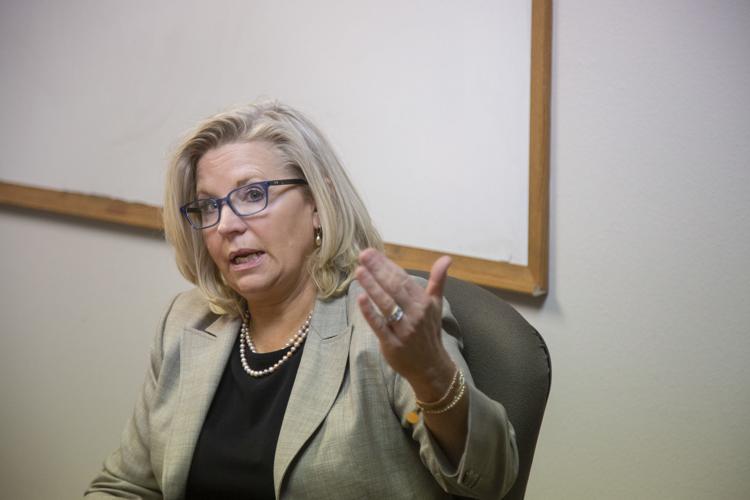 Rep. Liz Cheney sits down for an interview with the Star-Tribune on May 25. Cheney is facing a tough reelection fight.

Rep. Liz Cheney introduced legislation Tuesday that has been lauded for safeguarding landowners’ rights — a key conservation sticking point in Wyoming — but would actually do much more.

The bill preemptively limits the federal government’s ability to assume ownership of privately owned land under the Biden administration’s “30 by 30” conservation initiative, which seeks to protect 30% of U.S. lands and waters by 2030.

“The legislation I’ve introduced will protect the private property rights of individuals across our state who need access to these lands to provide for themselves and their families, while also ensuring that the current Administration’s political agenda will not undermine the interests of farmers and ranchers in Wyoming,” Cheney said in a statement.

President Joe Biden’s Jan. 27 executive order, “Tackling the Climate Crisis at Home and Abroad,” set 30 by 30 in motion. A 22-page report published in May rebranded it as the “America the Beautiful” initiative.

Section 216 of the executive order directed the secretaries of the Interior, Agriculture and Commerce departments and the chair of the Council on Environmental Quality to meet with a range of stakeholders — including landowners, fishermen and all levels of government — before developing multiple reports on how best to achieve the president’s sweeping conservation goals. The section does not mention any specific methods for doing so.

Theoretically, most Americans support conserving 30% of lands and oceans by 2030 — 86% of voters, to be exact, according to a 2019 poll commissioned by the Center for American Progress.

In practice, things are trickier. The Biden administration has emphasized its desire to ensure that conservation over the next decade is a collaborative process, but has offered few concrete details about how it plans to undertake the 30 by 30 directive.

“It’s relatively new. It’s somewhat undefined. But I think it’s a conversation worth having,” said Dan Smitherman, Wyoming state director of the Wilderness Society. The conservation group is a vocal supporter of the initiative and an advocate for ongoing cooperation across interest groups.

Many Wyoming residents, however, oppose 30 by 30 out of concern about property rights. They’re worried about losing access to cattle grazing, mining and other activities currently done on federally owned land, and even more afraid that the federal government could force them off land they own in the name of conservation.

Cheney’s office is marketing Tuesday’s bill as a way to protect private landowners. It includes assurances that nonconsenting private landowners would not be required to sell property to the federal government or participate in conservation practices on any privately held land.

But it would actually have much farther reach if passed.

For one, it would essentially void all recommendations issued under the 30 by 30 order — even if they are not directly connected to private land ownership.

The bill would also bar the executive branch from mandating that state, tribal or local governments participate in conservation recommendations issued as a result of section 216 of the executive order.

Cheney’s office has focused on promoting the private property component of the bill. Landowner issues have been the subject of debate in Wyoming since 30 by 30 was announced, and they remain a key source of resistance to the initiative.

“This is not the only concern, but it’s a major concern,” said Jeremy Adler, Cheney’s director of communications.

The May report indicates that the Biden administration plans to pursue voluntary arrangements with landowners, not involuntary ones.

“Efforts to conserve and restore America’s lands and waters must respect the rights of private property owners,” the report says. “Such efforts must also build trust among all communities and stakeholders, including by recognizing and rewarding the voluntary conservation efforts of private landowners and the science-based approaches of fishery managers.”

And the plan’s advocates question Wyoming leaders’ emphasis on property rights when so little has been decided.

“It’s a solution looking for a problem,” Smitherman said. “And personally, I think it’s political posturing.”

Some Wyoming conservation groups, including the Powder River Basin Resource Council and the Wyoming Outdoor Council, have yet to take a stance on the 30 by 30 initiative.

But Cheney’s legislation already has the endorsement of a number of key players in Wyoming.

“It is critical that any conservation initiative be locally-based, cooperative and truly voluntary,” Gov. Mark Gordon said in a statement issued through Cheney’s press release. “Representative Cheney’s bill ensures that any program is voluntary and recognizes the private property rights that are fundamental to Wyoming landowners.”

And outside of politics, the Wyoming Stock Growers Association chimed in.

“The potential threats to private property rights and the multiple use of public lands have hindered producers in making needed decisions with positive long-term implications for their business and for our state,” said Jim Magagna, executive vice president of the association. “Passage of this legislation will enable us to return to addressing natural resource management decisions based on sound science and economic analysis, not on political expediency.”

As she campaigns for reelection, Cheney will be able to point to her bill as an example of how she uses her office specifically to represent her constituents, especially in light of the criticism she’s faced from fellow Wyoming Republicans following her criticism of former President Donald Trump’s attempts to undermine the 2020 election.

Wyoming is pinning its hopes for the future on a new era of energy technologies — but is not giving up on the industries that sustain it today.

Regular gasoline reached a new statewide record price of nearly $4.19 per gallon on Friday, up from a previous high of $4.14 per gallon last Friday.

Appeal still an option on canceled oil and gas leases

The federal government requested more time to plan its next steps.

In US, states struggle to replace fossil fuel tax revenue

State governments in the nation’s top regions for producing oil, natural gas and coal have by far the highest per-capita reliance on fossil fuels — led by Wyoming, North Dakota, Alaska and New Mexico.

The state will work with the Idaho National Laboratory to advance low-carbon energy technologies, including next-generation nuclear and clean hydrogen.

Here are some money traps and how to avoid them

Here are some money traps and how to avoid them

A herd of cattle and horses feed on a ranch in April in Casper. Legislation introduced by Rep. Liz Cheney aims to limit the federal government's ability to assume ownership of private land under a Biden administration executive order.

Rep. Liz Cheney sits down for an interview with the Star-Tribune on May 25. Cheney is facing a tough reelection fight.