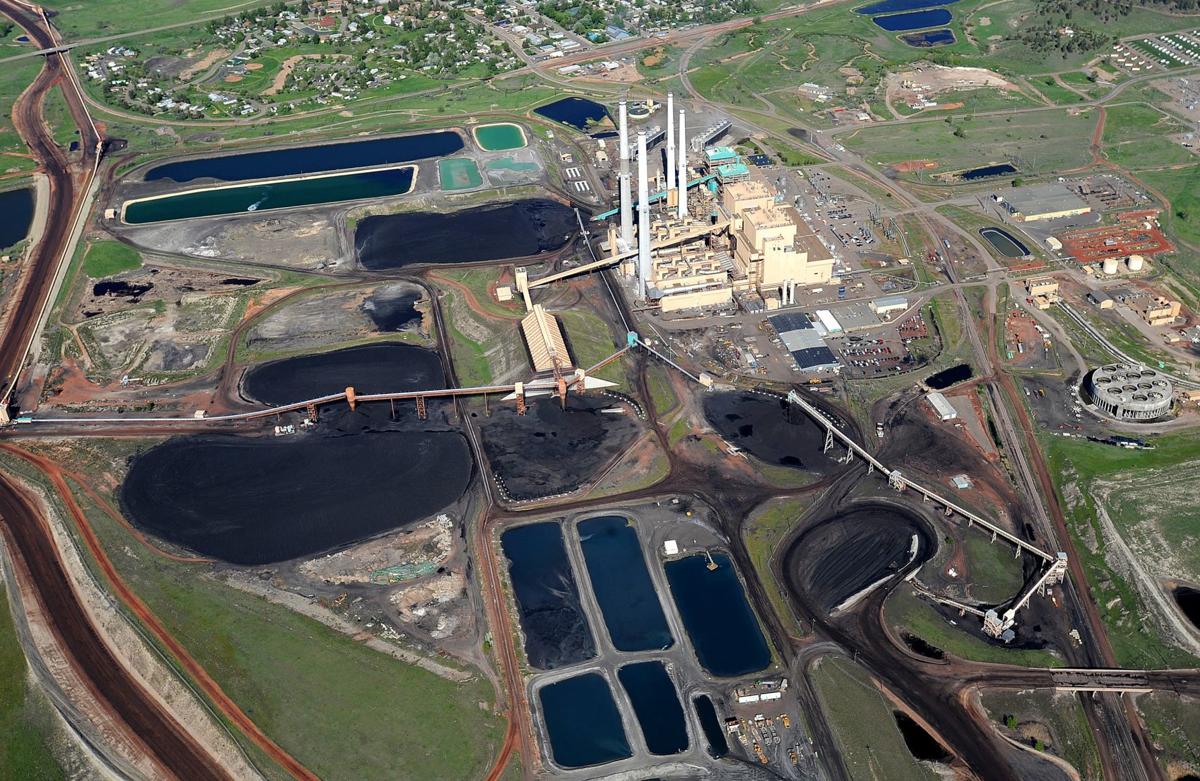 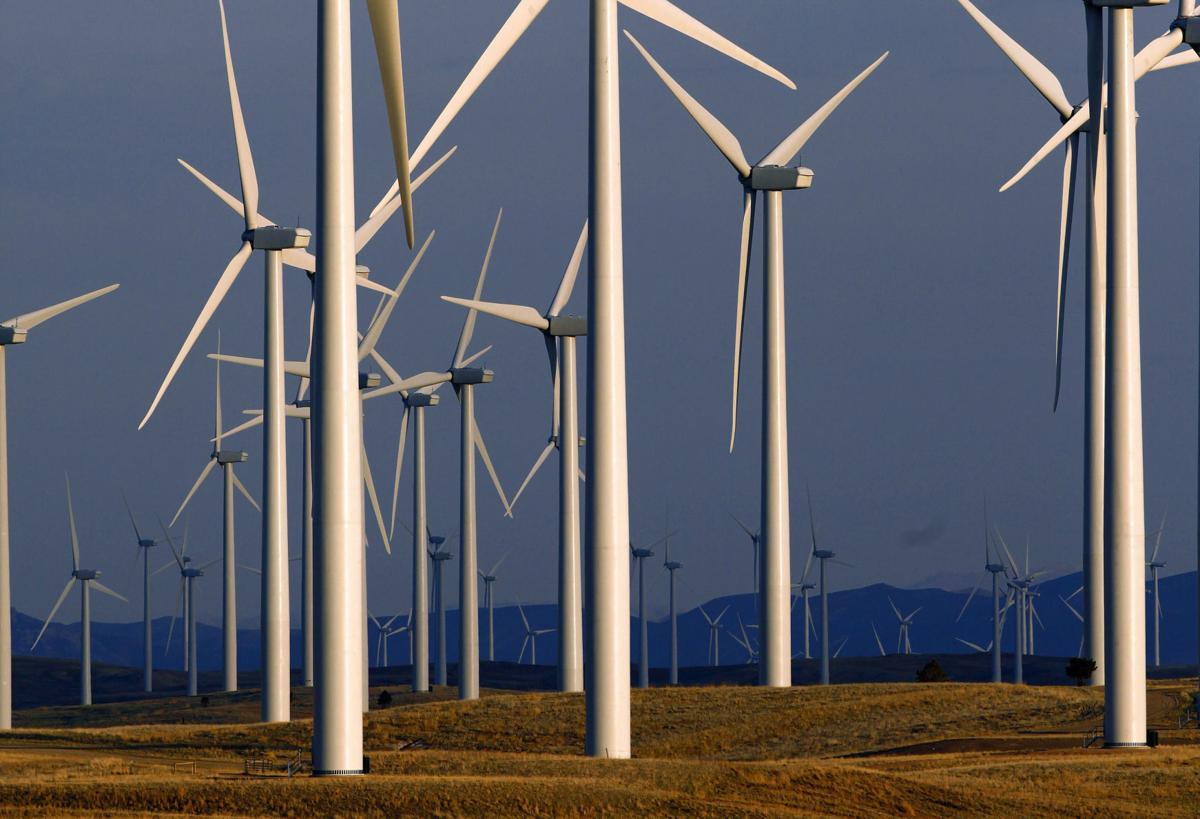 A wind turbine farm owned by PacifiCorp near Glenrock is seen May 6, 2013. Bigger, more efficient equipment will allow a western U.S. electric utility to redevelop an aging Wyoming wind farm with far fewer turbines while generating the same amount of power. Portland, Oregon-based PacifiCorp plans to replace 68 wind turbines at the Foote Creek I wind farm with 13 turbines over the next year.

BILLINGS, Mont. — Another Colstrip Power Plant owner says it will save customers money by cutting the cord to the southeast Montana generator in five years.

Spokane-based Avista Corp. says its customers would save at least $2 million a year if Colstrip Units 3 and 4 were retired at the end of 2025. Ongoing expenses like the cost of coal ash pollution storage are expected to increase for the Colstrip owner in coming years. Disposal of coal ash is expected to double by 2023.

Avista did not include rising costs associated with the price of coal, which recently increased for power plant owners under a new agreement with Rosebud Mine.

To replace Colstrip electricity, Avista would purchase 300 megawatts of Montana wind energy in the next seven years and transmit that green power to Washington on power line space freed up by Colstrip’s shutdown. The first Montana wind purchase of 100 megawatts could come as early as 2022, according to the utility’s 2020 Integrated Resource Plan, filed Feb. 28 with the Idaho Public Utility Commission.

“Montana typically has a different wind profile than our current wind generation, specifically it is more likely to produce wind energy in the winter, which is when our customers need it the most,” Thackston said in an email Monday.

Idaho isn’t mentioned much in Colstrip Power Plant conversations, which are dominated by climate change laws establishing coal power end dates in Washington and Oregon, where four of Colstrip’s six owners face coal power bans starting in 2025. As states drawing Colstrip power go, Idaho is the most conservative, even more so than Montana. Climate change bills don’t last long in the political heat of the Idaho Legislature.

“People can smell a bad deal. There’s a reason why people are moving away from these things, it’s because there’s cheaper energy out there,” said Matt Nykiel, of the Idaho Conservation League. “Here, the issue is the pocket book.”

Idaho doesn’t have a coal-fired power plant or a coal mine. It does have three utilities; Idaho Power, Rocky Mountain Power and Avista, with coal-fired power plants spread across Montana, Wyoming and Nevada. Consumers aren’t thrilled about being caught up in politics of coal states, where politicians and utilities like NorthWestern Energy are pushing to keep power plants running.

“For Montana to demand that Idaho customers stay on and pay more for power, that’s not fair,” Nykiel said.

Until the Avista’s latest energy plan, there was concern that Idaho, lacking climate change laws, would become the repository for coal power Avista couldn’t sell in Washington.

Idaho accounts for a third of Avista’s customer base, but the utility does not plan to dedicate its Colstrip power to Idaho customers, Thackston said.

The company’s plans for Montana energy are a bit of a slide puzzle. The ability to move wind power from Montana is limited until Colstrip goes offline. That’s because the power lines serving Colstrip are the only direct energy path to the Pacific Northwest. Avista owns capacity on the Colstrip line equal to its output share at the coal-fired power plant. The initial plan is to move 100 megawatts of Montana wind beginning in 2022, but there’s another 200 megawatts that wouldn’t move until Colstrip output declines.

Which Montana wind farm sells power to Avista remains to be seen, Thackston said. Avista’s goal is to by 2030 cut carbon emissions by 80 percent from 2018 levels.

“Avista has not identified any specific wind projects in Montana at this time. We would go through a request for proposal process where we would select the best choice for our customers,” Thackston said.

There are Montana renewable energy projects in development with the Colstrip power line in mind. The Clearwater Wind farm near Forsyth is a 400-megawatt project with 120 to 200 turbines spread over three counties. The Colstrip line is nearby.

When Colstrip’s units go offline is complicated, Avista explained in its 20-year resource plan. Avista gameplanned for Unit 3 going offline in 2025, while Unit 4 burned on until 2035. It also forecast for both units shutting down in five years. Ownership of the units makes closure complicated. Avista has a 15 percent share in both.

Four Pacific Northwest utilities own shares of Unit 3 and all face deadlines to stop billing customers for coal assets. Talen Energy, the power plant operator and non-utility owner of Unit 3, has also indicated that it’s losing money on Colstrip.

Unit 4 ownership has a different ownership makeup. Talen isn’t a Unit 4 owner, but NorthWestern Energy is. The largest monopoly utility serving Montana, NorthWestern is trying buy an additional 25 percent of the unit. NorthWestern has indicated support for running the unit until 2042, while also suggesting it considers buying more of the unit beneficial even if Unit 4 closed in 2025.

Avista indicates it would have to wait until 2035 to add another 200 megawatts of Montana wind if Colstrip Unit 4 continues to operate that long.

Avista’s Colstrip plans are in stark contrast to NorthWestern Energy’s.

While Avista is planning for Montana wind energy during its winter peak energy demand, NorthWestern has cited coal power as essential on cold days “when the wind doesn’t blow and the sun doesn’t shine.” Both are planning to add about 750 megawatts of capacity in the next five years. NorthWestern’s plan concludes that building new gas-fired power plants is the best way forward, but is also looking to buy 185 megawatts of Colstrip capacity.

Both utilities own 222 megawatts of Colstrip Power Plant capacity. Avista’s capacity is evenly split between Colstrip Units 3 and 4. NorthWestern’s share is entirely in Unit 4. NorthWestern’s plan to buy more of Unit 4 depends on Montana’s Public Service Commission pre-committing the utility’s Montana customers to paying for costs, not fully disclosed, which are tied to the larger share.

Avista is the third Colstrip owner to indicate that it would save customers money by getting out of Colstrip within five years. PacifiCorp, which has the smallest share of Colstrip with 148 megawatts of capacity is making a dramatic shift to renewable energy, which it says is cheaper. PacifiCorp will cut ties with 16 coal-fired units in the next 10 years, including its 148 megawatt ownership share in Colstrip.

The earliest owner out may be Puget Sound Energy, which is attempting to sell its share of Unit 4 to NorthWestern this year. Puget estimates that its early exit from Unit 4 would create a $25 million to $46 million net benefit for customers.

Puget is Colstrip’s largest shareholder with 370 megawatts of capacity evenly divided between Units 3 and 4. The Bellevue, Washington utility also closed Colstrip Units 1 and 2, with co-owner Talen Energy. The units that shut down in January were uneconomical, according to Talen and Puget, which each had a 50 percent share.

All three utilities have plans for new generation to fill the regional power void created by shuttering coal-fired power plants. And, all three face a Washington state deadline to remove coal power from their supply portfolios by the end of 2025.

Avista forecasts a less than 5 percent chance of not meeting customers’ energy needs in the most extreme energy demand times as it shifts away from fossil fuel energy sources.

Avista plans to add 794 megawatts of new capacity during the next 10 years, both by investing in new renewable energy developments and also upgrading generation at its existing dams. At the same time, the Spokane utility plans to shed 479 megawatts of fossil fuel power, not only by cutting ties with Colstrip, but also by ending its purchase power agreement, or PPA, with the gas-fired Lancaster Power Plant in Rathdrum, Idaho, from which Avista has a 257-megawatt commitment.

“While the fate of the plant will depend on a decision made by all owners of the facility, each of whom have their own economic circumstances, (Avista’s plan) indicates that Avista’s most economic decision would be to close the plant at the end of 2025 as opposed to 2035. To replace the lost Colstrip capacity along with the Lancaster PPA, Avista seeks to add a combination of 175 megawatts of long duration pumped hydro and 200 megawatts of Montana wind.”

Carbon capture: can it be efficient, cost-effective and commercial scale all at once?

Scientists Dr. Kunlei Liu and Heather Nikolic at the University of Kentucky plan to bring their latest carbon capture research to Wyoming's Integrated Test Center. Here's what to expect.

Star-Tribune energy reporter Camille Erickson caught up with the new executive director of the Wyoming School of Energy Resources after her first week on the job.

The hurdles faced by the industry writ large will require the expertise from a whole suite of disciplines.

When oil and gas prices are low, the state mineral tax — know as a severance tax — would be reduced by 2 percent under the new act.

A new material called perovskite has taken the field of solar energy by storm in recent years and holds commercial promise.

A new agreement with Wyoming's largest utility approved by regulators Tuesday could provide the state with more flexibility determine energy future, at a time when its sister states transition away from coal.

The unlikely marriage of cryptocurrency and crude

Their solution appears simple but potent: take excess natural gas, convert it to electricity on a well site and then use that power for data computing.

A new company called Encore Green Environmental works to use produced water from nearby oil and gas production to improve Wyoming's soil, air and vegetation to sequester more carbon.

A wind turbine farm owned by PacifiCorp near Glenrock is seen May 6, 2013. Bigger, more efficient equipment will allow a western U.S. electric utility to redevelop an aging Wyoming wind farm with far fewer turbines while generating the same amount of power. Portland, Oregon-based PacifiCorp plans to replace 68 wind turbines at the Foote Creek I wind farm with 13 turbines over the next year.