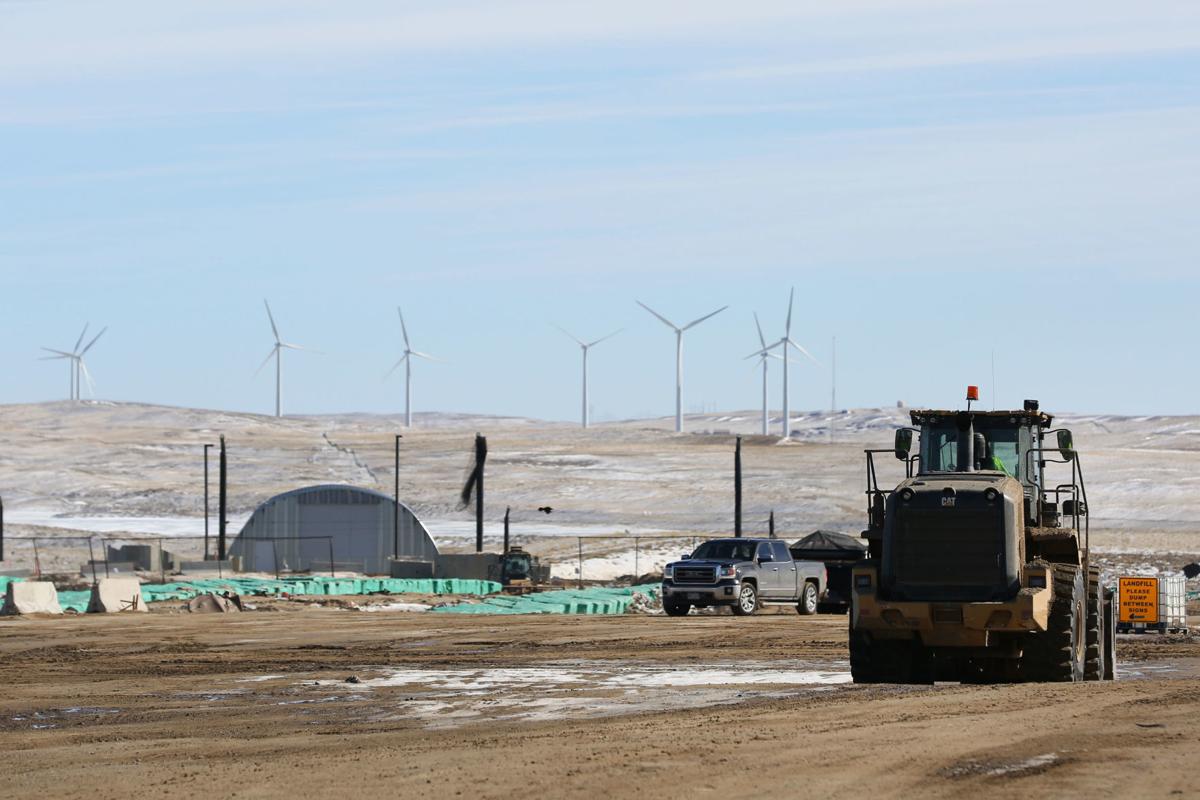 Heavy machinery moves discarded items at the Casper Regional Landfill while in the distance a field of windmills operate Friday in Casper. The landfill's acceptance of fiberglass turbine blades has become a point of contention for some. 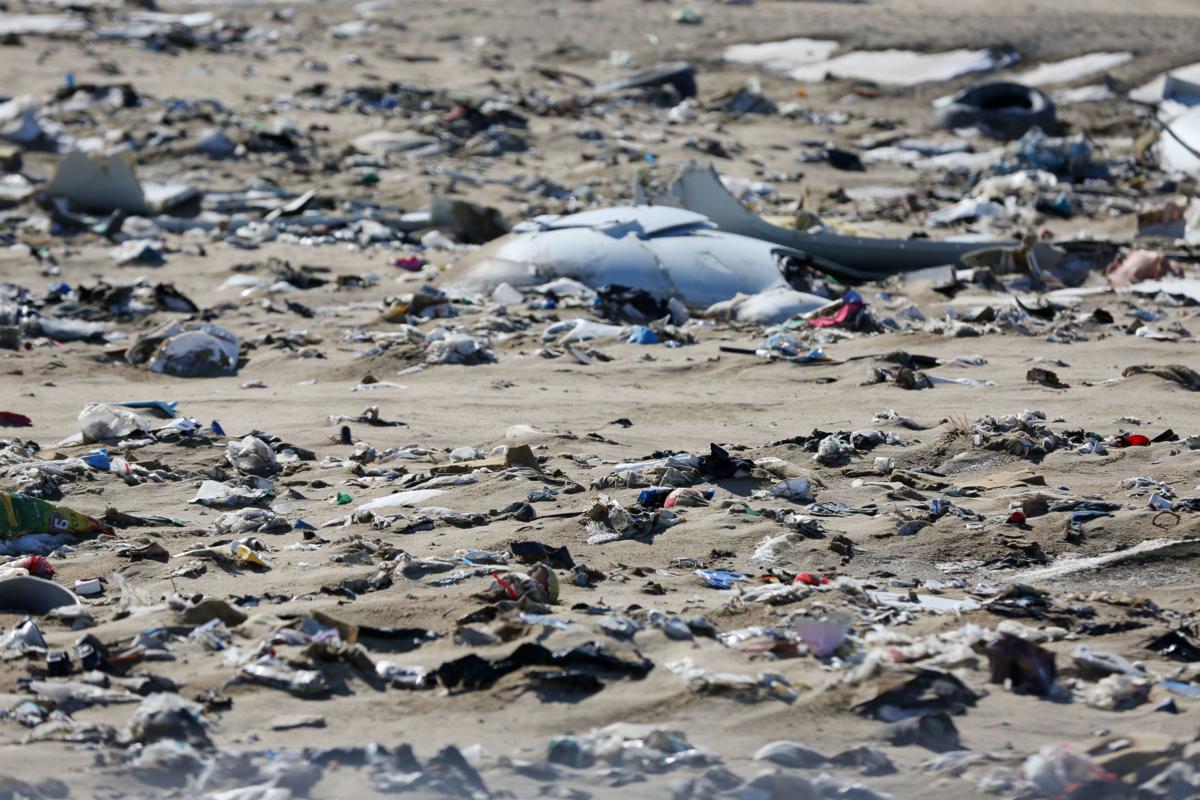 Partly covered trash covers the ground at the Casper Regional Landfill Friday in Casper. The landfill's acceptance of fiberglass turbine blades has become a point of contention for some.

Eight hundred seventy-four wind turbine blades have been entombed in the city of Casper’s regional landfill. The blades once powered Wyoming’s burgeoning fleet of wind turbines but have succumbed to a utility company’s effort to upgrade several wind farms across the state.

The blades, which make up about 10 percent of a wind turbine’s total material, are made of fiberglass, a tricky material that can’t be recycled or easily repurposed.

As utility companies look to replace aging wind turbines, the machines’ blades are being buried in stacks at a handful of landfills around the country, including in the Casper Regional Landfill.

Rapid technological advancements in renewable energy have led many utilities to ramp up wind energy installation to supply ratepayers with cheap electricity. Yet the growing number of wind farms sprouting up across Wyoming’s blustery plains have caused many lawmakers and residents loyal to the state’s robust fossil fuel industry to bristle.

When Casper’s landfill began accepting the blades, criticism of the wind industry here ballooned. The blades have swept Casper into a national discussion around renewable energy, waste and environmental responsibility.

Each turbine blade is 120 feet long and cut into 40-foot pieces before being buried. Compare that to a typical single-story house, which stands between 12 and 14 feet tall. The thinner two pieces are stored inside the wider third to minimize needed space, but each turbine blade and the motor housing unit still take up about 30 cubic yards combined. The landfill has accepted 289 motor housing units.

The sheer size of the equipment and the potential environmental ramifications of disposing something that can’t decompose have raised concerns among wind energy critics.

But Casper Solid Waste Manager Cynthia Langston hopes to dispel some of those concerns. Despite the size of the blades, Langston said the landfill has plenty of space for them. She said the landfill won’t need to open another cell, or separate space, for the blades until 2034, at the current rate.

“I wish people were so interested in all the garbage,” she said, not just the wind turbines.

Looking ahead: 2020 could be a big year for wind in Wyoming

Accepting the blades at Casper Regional Solid Waste Facility also provides an economic benefit for the city, Langston noted. The deal has already earned Casper nearly $450,000, and when more come this spring, the total earnings for the city could reach $600,000.

Turbine blades are not the only form of “special waste” the city takes in for revenue. The city estimates it gains roughly $800,000 annually from accepting special waste from various entities, including the oil and gas industry.

Waste from oil and gas operations puts more pressure on the landfill than anything, she said, with tires and dewatering liners among the bigger drivers of waste encountered by Langston’s team at the landfill.

“Truly, those turbine blades are the most inert, non-problematic waste we’re accepting,” she said.

Moreover, the wind power industry generally ranks among the best at recycling and repurposing their equipment among its energy peers, Langston added. Roughly 90 percent of all wind turbine material is recyclable because much of the machine is composed of steel, copper or other electronic materials.

That said, the wind energy industry continues to grapple with its footprint. And the unrecyclable fiberglass blades do pose a pressing conundrum for the industry, said Jonathan Naughton, a University of Wyoming engineering professor and director of Wind Energy Research Center.

“Blades are a big problem,” Naughton said. “Twenty years ago, people were just trying to get wind turbines to work; they weren’t thinking about their end of life, or what do we do with them afterwards.”

But he also remains hopeful. The relatively young wind industry constantly innovates and has a particular eye on sustainability, he said. Most companies and scientists no longer simply focus on how to produce power, they are also working to make the practice of constructing turbines as sustainable as possible.

Currently, no commercially viable mechanism for repurposing the fiberglass exists, though some companies are researching alternatives, such as breaking the blades into pellets for reuse.

“While blades are going into landfills now, we do see alternatives coming up on the horizon,” said Greg Alvarez, deputy director of external communications at the American Wind Energy Association. “We’re absolutely committed to dealing with this issue.”

The state’s largest utility, Rocky Mountain Power, recently invested over $3.1 billion in new wind projects in Wyoming. As a result, the utility has charged ahead in upgrading its existing wind fleet with fresh technology, including bigger blades. That means decommissioning several of its older blades and disposing them in Casper’s landfill. While nearly 90 percent of the company’s wind turbines can be recycled, Rocky Mountain Power is in the process of paying the Casper landfill nearly $700,000 to dispose of the remaining materials: the blades and motors.

“Wind plants, once decommissioned, generally have a high scrap value in the non-fiberglass project infrastructure such as steel, electric generators and the associated copper,” said Spencer Hall, a spokesman for Rocky Mountain Power. “However, there are currently few economic alternatives for recycling fiberglass — and what little market there is has been overwhelmed by the number of blades that are currently being removed as a result of repowering efforts across the country.”

In the meantime, Rocky Mountain Power will continue researching more “ways to improve the sustainable disposal or recycling of the blades.”

The city’s current agreement with Rocky Mountain Power to accept turbine waste lasts only through this spring, according to Langston. That deal has brought material from three wind farms around Wyoming to the Casper landfill.

The landfill has a permit from the Wyoming Department of Environmental Quality to accept the waste, a “rigorous” process Langston said took at least 1.5 years. The landfill still isn’t permitted to accept turbine waste from out of state.

Yet the city’s ability to accept the fiberglass waste from any wind turbines whatsoever stands in a tenuous position this legislative session.

Wyoming lawmakers are debating a bill that could ban the disposal of turbine blades and motor housing units in municipal landfills, or at any facility, “except by delivery to a facility that reuses, recycles, breaks down or repurposes the blades.”

Langston raised concerns over the bill, saying that you can’t ban something from a landfill before finding an alternative solution to the waste.

Sponsored by Rep. Bunky Loucks, R-Casper, the House introduced the bill last week and sent it to the Minerals, Business and Economic Development Committee for further deliberation.

This year's first oil and gas lease sale came at an uncertain time for Wyoming. Oil prices have plummeted and investors have ditched energy shares. Despite these conditions, 72 percent of available parcels sold.

Wyoming coal mine will lay off 60 workers

Workers received official notice of the layoffs on Wednesday; they will receive pay through April 2.

Star-Tribune energy reporter Camille Erickson caught up with the new executive director of the Wyoming School of Energy Resources after her first week on the job.

The National Mining Association urged federal officials last week to relieve coal companies of royalties and other fees to maintain healthy cash flow and keep producing the coal supplying roughly a quarter of the nation's electricity.

A new agreement with Wyoming's largest utility approved by regulators Tuesday could provide the state with more flexibility determine energy future, at a time when its sister states transition away from coal.

A new material called perovskite has taken the field of solar energy by storm in recent years and holds commercial promise.

Carbon capture: can it be efficient, cost-effective and commercial scale all at once?

Scientists Dr. Kunlei Liu and Heather Nikolic at the University of Kentucky plan to bring their latest carbon capture research to Wyoming's Integrated Test Center. Here's what to expect.

Though comments on proposed permits or rules can often be submitted through online portals, some related documents are only available at state agency offices and require in-person visits, according to the groups.

Heavy machinery moves discarded items at the Casper Regional Landfill while in the distance a field of windmills operate Friday in Casper. The landfill's acceptance of fiberglass turbine blades has become a point of contention for some.

Partly covered trash covers the ground at the Casper Regional Landfill Friday in Casper. The landfill's acceptance of fiberglass turbine blades has become a point of contention for some.