Beneath Wyoming’s surface lie a bounty of resources most of us haven’t thought about since high school chemistry.

None of the increasingly sought-after rare earth elements — neodymium, dysprosium, praseodymium, another dozen lanthanides and a couple of others — are household names. On the periodic table, they’re housed mostly in the block of outliers relegated to the place where Alaska and Hawaii sit on U.S. maps.

But many of those elements are household staples. They’re what let smartphones glow and ring and buzz. They make fridges cold, lightbulbs bright and TVs vibrant. And their uses elsewhere run the gamut from oil refineries to hospitals.

Calling the elements rare is kind of misleading: They can be found all over the place. It’s harder, however, to locate them in concentrations high enough to mine. Which is what distinguishes the two rare earths projects underway in Wyoming.

The mineral exploration companies studying those deposits — Rare Element Resources in the northeast corner of the state and Western Rare Earths in the southeast — each think they might’ve hit the jackpot (though it’s too early to say for sure). Both hope to one day give the state a new foothold in the energy sector.

“Wyoming’s got a long history of oil, gas and coal,” said Western Rare Earths CEO Marty Weems. “They get that resource out of the ground, it gets shipped somewhere else. But we see Wyoming emerging as a more complete supply chain in this critical mineral space.”

It could take the state a long time to get there.

The Department of the Interior counts 16 of the 17 rare earths among the 50 critical minerals considered essential to the U.S. economy and vulnerable to supply chain disruption. With only one rare earths mine operating within its borders, the U.S. has imported most of its rare earths from China for decades.

From a national security standpoint, dependence on China for rare earths has always been a worry, said Oscar Serpell, a researcher at the University of Pennsylvania’s Kleinman Center for Energy Policy.

“But now, I think, with the energy transition, and the growing need for investment in clean energy, any sort of interruption in supply from China could very likely delay that as well,” Serpell said.

The permanent magnets used in some wind turbines contain a larger quantity of rare earths — mainly neodymium, dysprosium and praseodymium — compared with most other technologies.

“You’re talking about a several-kilogram magnet that requires a lot of this material,” Serpell said. “The demand for these electric motors and electric generators is growing exponentially.”

The increasing need for rare earths is boosting interest in U.S. production. And the associated rise in price is attracting companies to sites that may not have been economically viable before. Not all deposits include much neodymium, dysprosium or praseodymium, but Wyoming’s do.

Western Rare Earths bought its Halleck Creek project, which was discovered more than a decade ago, last year. It will have to drill hundreds more holes and analyze a lot more data before applying to open a mine at its Albany County project site.

Commercial operations, and a few hundred new mining jobs, could still be as much as another decade away, Weems said — unless the government intervenes to expedite the process. Unfavorable results, meanwhile, could derail things entirely.

“These are really early days on a project like this,” he said. “On the short end, you’re probably talking five to seven years before it starts looking like a mine. If everything goes well.”

Mining is only the first step for rare earths. They still have to be processed and separated, and nearly all of that also takes place in China.

According to Glen Murrell, executive director of the Wyoming Energy Authority, that secondary piece of the rare earths supply chain, not the mining, is the state’s biggest obstacle.

Rare earths face similar supply chain challenges, he said, to uranium, which must be milled and enriched before being turned into the fuel rods used by nuclear reactors. The uranium mined in Wyoming — a tiny fraction of what it produced in the 1980s — is mostly shipped out of the country, including to Russia and China, to be converted into fuel. There’s no alternative.

Wyoming wants to export its natural gas. The West Coast won't let it.

“It’s not that we don’t have the resources,” Murrell said. “We don’t have the facilities to actually take the raw resource and then upgrade it to something that is useful for our manufacturing industry.”

Sourcing the more highly enriched uranium needed for advanced nuclear reactors, including the plant TerraPower plans to build in southwestern Wyoming, is even trickier: Russia is its only commercial supplier. After Russia invaded Ukraine, and trade relationships soured, advanced nuclear developers realized they’d have to procure their fuel somewhere else.

Unless the U.S. builds more rare earths processing capacity, ore mined in Wyoming will still have to go through China, where it will continue to face risk of disruption.

The absence of needed infrastructure is an opportunity for Wyoming, he said. The momentum behind building those supply chains could be the key to diversifying the state’s fossil-fuel-reliant economy.

Rare Element Resources has been evaluating mining potential at its Bear Lodge rare earths project, 63 miles east of Gillette, since 2004.

And it discovered “what we believe is one of the most important rare earth resources in the world,” President and CEO Randy Scott told a Wyoming legislative committee last month.

“We’ve drilled the heck out of it,” he said. “So we’re in good shape as far as the resource goes.”

The company is trying to bring the rest of the supply chain to Wyoming, too. Its demonstration-scale processing and separation facility — the stage of development in between pilot and commercialization — could be operational in 2024 if permitting goes according to plan.

“That is our No. 1 priority right now,” Scott said.

The roughly $47 million plant received close to half its funding from a U.S. Department of Energy grant last year, and private investors, galvanized again after a few slow years for the rare earths industry, contributed the rest. Permitting is now underway. And 1,000 tons of ore previously extracted from the Bear Lodge site sit ready to be processed.

“It’s not, you know, distant arm-waving,” Murrell said. “These things are happening now.”

Rare Element Resources expects to run the demonstration plant for about a year. If the technique it developed alongside majority shareholder General Atomics, a defense contractor, stands up to larger-scale testing, the company will then shift its focus to the commercial plant it hopes to build nearby.

The prevalence of the most in-demand rare earths may not be Wyoming’s only competitive advantage. Its deposits’ composition could prove favorable in other ways.

Because radioactive elements and rare earths occur together so often, “people would look for a radioactive signature, which would be the uranium and thorium, and then the rare earths would just happen to also be there,” Weems said.

Halleck Creek, however, was “stumbled upon,” he said. And Western Rare Earths’ early results suggest that the deposit’s radioactivity may fall well below the licensing threshold, which the company hopes will improve the project’s chances.

“We’re extraordinarily encouraged by the fact that the uranium and thorium content is near negligible,” Weems said. The concentration could be low enough that “it’s not considered necessary to have special handling — it’s just rock like you have in your backyard.”

But the mining and processing of rare earths still generates byproducts that have to be dealt with, whether they’re radioactive or not.

“Because it has this incredibly high waste-to-yield ratio, you’re talking about a lot of mine tailings,” Serpell, from the University of Pennsylvania, said. “It’s very difficult to responsibly and sustainably manage that volume of waste.”

One way to balance demand for rare earths with the environmental impacts of mining, he said, is to find deposits that are not only low in uranium and thorium — which simplifies how the waste is handled — but also have a very high concentration of rare earths, minimizing the volume of waste left behind.

So far, the Halleck Creek project checks both boxes.

The Wyoming Innovation Center, an approximately $3.3 million facility dedicated to finding alternative uses for coal, opened its doors in June. It’s been in the works for about seven years.

The Gillette facility is modeled after the nearby Wyoming Integrated Test Center, built adjacent to the Dry Fork Power Plant and aimed at advancing carbon capture and utilization technology. Both allow researchers to set up shop for months, or for years, to test projects ready to advance beyond the laboratory.

The brand-new Wyoming Innovation Center now awaits its first tenant: Scientists from the National Energy Technology Laboratory, working on a method to extract rare earths from the ash formed by burning coal, are expected to arrive by early next year.

“What we’re proposing to do is a very small pilot,” said Christina Lopano, a research physical scientist at the laboratory. The pilot — which has the potential to circumvent the need for new mining — should conclude by the end of 2023.

“But if we can demonstrate it on the smaller scale, with a couple barrels and some separation technologies, there’s space there,” Lopano added. “If somebody wanted to potentially take it to the next step and commercialize it.”

The biggest climate bill in US history is now law. Here’s what it means for Wyoming.

What's in the climate bill, and what will it mean for Wyoming? Here's our explainer.

Developmental tech could be key to a Wyoming rare earths industry

Both of the companies with plans to mine rare earth elements in Wyoming are also targeting thornier parts of the critical minerals’ supply chain. 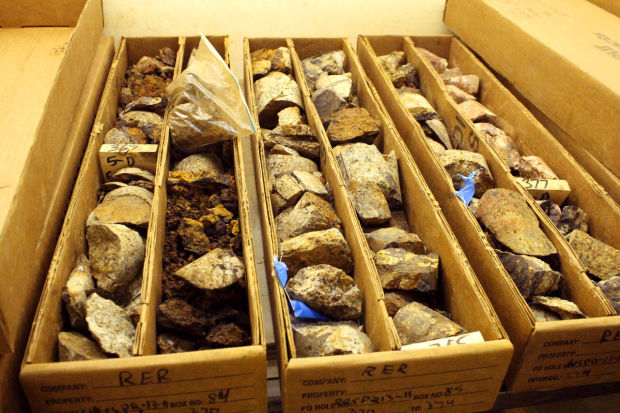 Samples of core from the Bear Lodge Project rest in a shed in Sundance. Two rare earths mining projects in Wyoming are hopeful that they've hit enough elements for the state to increase its presence in the energy sector. 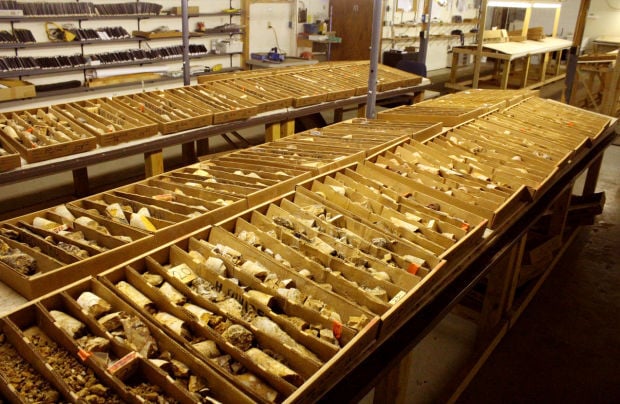 Core samples from the Bear Lodge Project rest in a Rare Element Resources shed in 2014 in Sundance. Mining rare earths is only the first step in harnessing their potential. 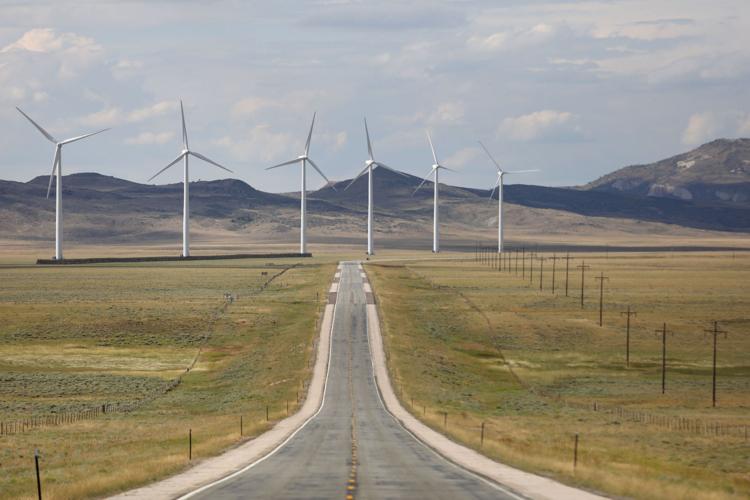 Wyoming Highway 487 leads to a line of wind turbines on Aug. 8 in the Shirley Basin north of Medicine Bow. Beneath Wyoming’s surface lie a bounty of resources most of us haven’t thought about since high school chemistry.