BISMARCK, N.D. — The Dakota Access Pipeline has faced cyberattacks like the one against the Colonial Pipeline last week that forced it to shut down and disrupted fuel supplies to the East Coast, Energy Transfer Executive Chairman Kelcy Warren said Wednesday during an appearance at an oil conference in Bismarck.

The attacks against Dakota Access failed, but Warren indicated such attempts are a growing threat to the pipeline industry.

“I’m worried this is going to be tried a lot more frequently,” he told attendees of the Williston Basin Petroleum Conference at the Bismarck Event Center.

The Colonial Pipeline began operating again Wednesday afternoon after it shut down last Friday. It transports nearly half the East Coast’s fuel supply.

The FBI has identified the hackers responsible for the attack as a group known as DarkSide.

“How long before they say, ‘Wow, we get people’s attention when we do this. Let’s do some more,’” Warren said.

Another big name to speak at the conference, Harold Hamm, founder of Continental Resources, called what happened to the Colonial Pipeline a “terrorist attack” and said the federal government needs to step up. Continental and the pipeline companies it works with fend off hits every day, he said.

“It needs to be escalated from the FBI to the Department of Defense,” he said. “These are foreign terrorists doing this that want to take down America.”

DarkSide appears to hit targets in English-speaking countries and avoid those in parts of the former Soviet Bloc, according to the cybersecurity company Cybereason.

Warren said Energy Transfer workers undergo training to avoid falling victim to cyberattacks such as the ransomware that targeted the Colonial Pipeline. In ransomware attacks, hackers generally use a means such as a phishing email to gain access to a company’s systems, then lock users out until they agree to pay a large sum of money to restore access.

Energy Transfer has more tangible security measures in place as well to keep its pipelines safe.

“We have bulletproof glass in our control rooms,” Warren said. “We have redundancy beyond imagine.”

He said the attack on the Colonial Pipeline is “drawing attention to how important pipelines are to this nation.”

Warren’s comments come as the threat of a shutdown looms over Dakota Access. A judge is expected to rule in the coming days or weeks as to whether the pipeline can continue operating during a court-ordered environmental review. The Standing Rock Sioux Tribe — whose reservation lies just downstream of the line’s Missouri River crossing — has asked the judge to force Dakota Access to stop pumping oil while the review is complete. That review will determine whether the pipeline is reissued a permit for its river crossing, which the judge revoked last year.

The U.S. Army Corps of Engineers expects to complete the study, known as an Environmental Impact Statement, by March 2022.

Even if the pipeline is ordered to shut down, Energy Transfer is expected to appeal.

“I think this is business as usual until we receive the EIS, and then this stops being news,” Warren said.

Oklahoma-based Continental Resources ships oil it produces in the Bakken through Dakota Access, and Hamm expressed optimism about the line’s fate.

“It’s not going to shut down,” he said. “I think this administration is finding out certainly how critical (energy) supply is to America, to national security.”

Energy Transfer is in the process of expanding the pipeline by building additional pump stations to boost horsepower, including at a site in Emmons County. Warren said that work should wrap up by the end of the year.

The pipeline will then have the ability to transport up to 1.1 million barrels of oil per day, nearly double its existing capacity. The pipeline runs from North Dakota’s Bakken oil fields to Illinois, and then much of the oil is carried via other pipelines further south to the Gulf Coast.

Warren indicated that Dakota Access will not immediately operate at its new full capacity once the expansion is complete. The coronavirus pandemic has cut the demand for oil globally, and North Dakota’s oil output has fallen as a result. The state produced 1.083 million barrels per day in February, the latest month for which data is available.

“There’s not that volume out there right now to justify that, but it will come back and we’re ready for it,” Warren said.

The pipeline executive said he would like to see Texas-based Energy Transfer get into the petrochemical business, specifically, plastics manufacturing.

State leaders have been trying to lure the petrochemical industry to North Dakota to make use of the abundant natural gas liquids such as ethane, propane and butane that come up alongside methane and oil at well sites. Those liquids are currently carried by pipeline to market in other states.

Warren said North Dakota’s geography does not lend itself to becoming a petrochemical hub because it’s not located near water, which is needed to access global plastics markets.

“It’s going to have a huge role, but I don’t think you’ll see petrochemical plants built here,” he said.

The six proposed wind farms could add more than 1,600 megawatts of electricity generation capacity to Wyoming’s grid by 2024

The Biden administration’s suspension of new oil and gas leases on federal land and water was blocked Tuesday by a federal judge in Louisiana, who ordered that plans be resumed for lease sales that were delayed for the Gulf of Mexico and Alaska.

The Wyoming Oil and Gas Conservation Commission received about 60 applications for the Energy Rebound Program within roughly a day of the application period opening.

LARAMIE — After five hours of sometimes heated testimony regarding the proposed Rail Tie Wind Project, the Albany County Board of Commissioner… 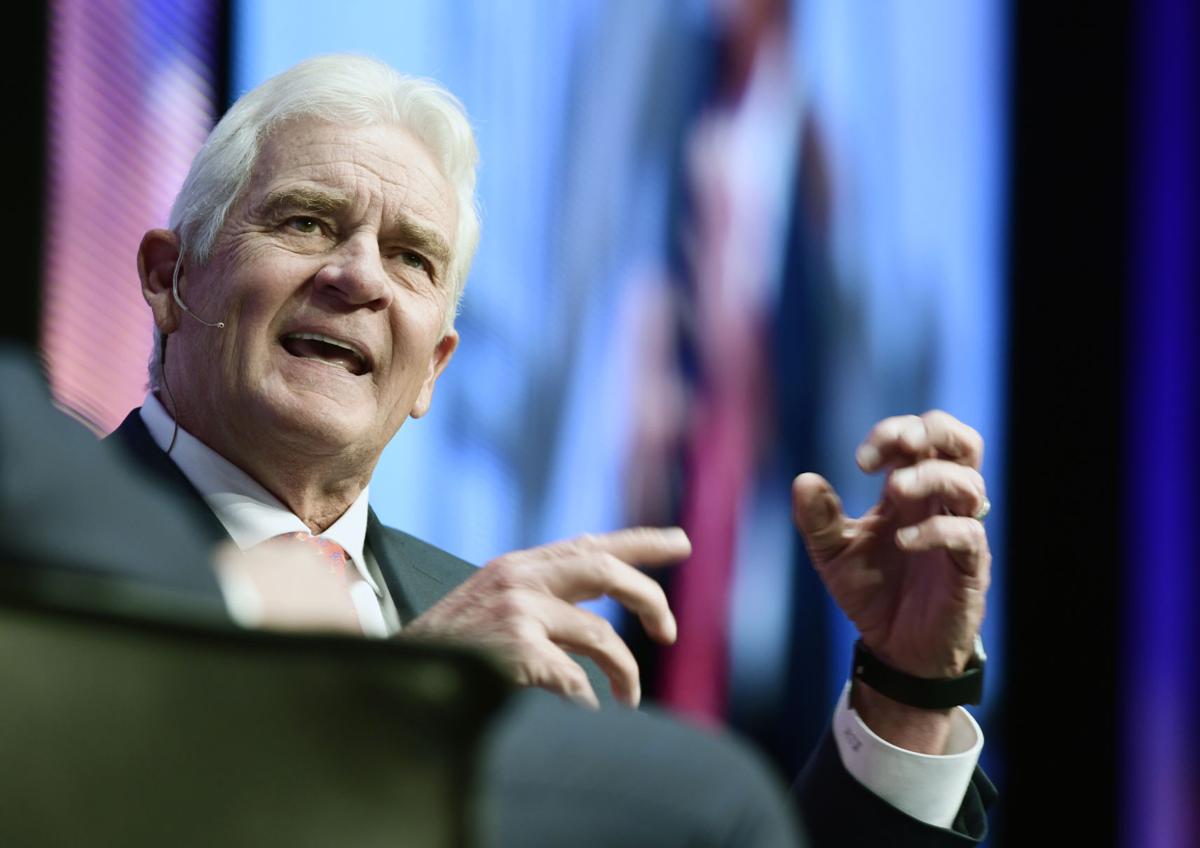 Kelcy Warren, executive chairman of Energy Transfer, the company that developed the Dakota Access Pipeline, talks about pipeline security during the Williston Basin Petroleum Conference at the Bismarck Event center on Wednesday. 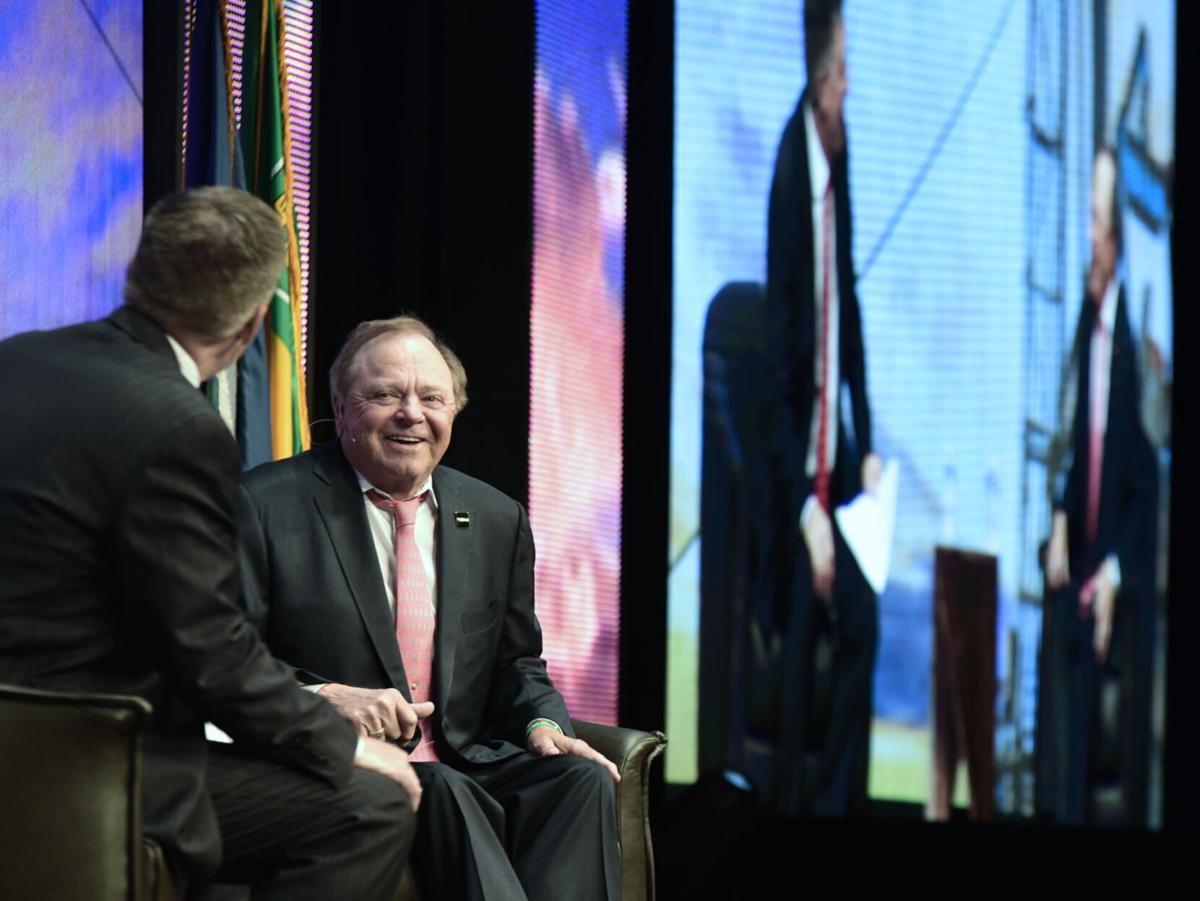