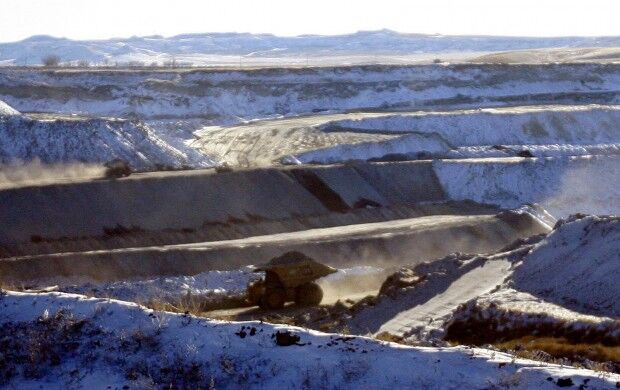 Trucks haul coal in 2013 at the Eagle Butte Mine north of Gillette. A group representing landowners has urged state regulators to deny the owner of the Eagle Butte mine near Gillette a permit renewal, due to its lack of federal leases.

Most days, Lynne Huskinson will walk her dog along the Red Rock trails near Gillette. While hiking, she can often see her former workplace — the Eagle Butte coal mine — about five miles off in the distance. The retired coal miner moved to Campbell County in 1977 and worked as a heavy equipment operator for just under four decades, before retiring in the summer of 2019.

But now, she’s worried about what’s happening at the Eagle Butte mine, one of the nation’s largest coal mines.

During testimony to state environmental regulators last week, Huskinson explained her concerns about the mine’s operator, Eagle Specialty Materials. She and other landowners outlined allegations of mining violations, delays in reclamation (or cleanup), and a lack of transparency with employees and the surrounding community.

“I worry that reclamation might not be done, and I’ll be looking at those three big holes in the ground, outside by my trail system,” Huskinson remarked. “The fact that (the operator) is not being transparent with the public or employees is worrisome.”

The Department of Environmental Quality held an informal conference on Thursday morning to hear landowners, like Huskinson, challenge the coal company’s bid to renew its mining permit.

The Powder River Basin Resource Council sent a letter Wyoming Department of Environmental Quality in December, urging regulators to deny the owner of the Eagle Butte mine a permit renewal, due to alleged violations at coal mines it holds permits for out east, and its lack of federal leases for the two Wyoming mines. The conservation organization represents landowners in the Powder River Basin, a region with intensive coal mining.

New coal firm Eagle Specialty Materials bought two coal mines in the basin from bankrupt coal firm Blackjewel in October 2019. But Thursday marked the first time the public was given an opportunity to weigh in on whether the state should extend mining permits to the new company.

According to the complainants, the federal leases associated with the Eagle Butte mine have yet to be formally transferred over to the new owner and operator. The transfer has been hung up in bankruptcy court for nearly 19 months.

Eagle Specialty Materials has defended its right to mine coal within the site boundaries, noting no violations have occurred at the Wyoming mines and the federal government has given it permission to mine as bankruptcy proceedings involving the former owner play out.

In the latest order on the matter, submitted to the bankruptcy court on Thursday, the federal government agreed to extend the deadline to reach an agreement on the lease transfer to March 31.

When Eagle Specialty Materials took over operations of the mine in October 2019, the transfer of leases was specifically withheld from the sales agreement to allow the federal government and the companies time to resolve outstanding issues.

Part of the problem came down to unpaid royalties owed by the former operator. Blackjewel owed roughly $50 million in unpaid royalties when it filed for bankruptcy. In the time between the bankruptcy and the sales agreement with Eagle Specialty Materials, it racked up even more.

When energy companies obtain federal leases and extract minerals from public land in Wyoming, they must pay royalties to the government. But it’s not only the federal government that benefits from timely payments of royalties from mineral extraction. About 48% of federal of royalties from coal travel back to Wyoming.

Before a federal lease can be transferred, outstanding royalties need to be settled, among several other requirements.

“Those leases are federal coal leases related to coal that is owned by you and me as American taxpayers,” attorney Shannon Anderson of the Powder River Basin Resource Council said. “And because of that, ESM must decide whether to settle up the debt of Blackjewel before they can take on those leases.”

“It’s been over a year now that the royalty debt is unpaid and leases remain untransferred,” she continued. “... That means, right now, ESM does not have a right to access coal within the federal coal unit. They do not own those leases.”

Director of the Department of Environmental Quality Todd Parfitt will have 60 days to review the information provided during the informal conference before issuing a decision.

--The U.S. Court of Appeals for the District of Columbia Circuit rejected the Trump administration’s proposed replacement to the Clean Power Plan, introduced by the Obama administration. The federal court found the replacement plan fell short in safeguarding public health and the environment. (via E&E News).

--The Trump administration left without submitting a brief to the U.S. Supreme Court on Wyoming and Montana’s lawsuit against the state of Washington over a blocked coal export terminal. It will be up to the Biden administration’s Justice Department to offer an opinion (via S&P Global).

--The Department of Interior temporarily suspended issuing new federal oil and gas permits or leases for 60 days unless approved by new appointees, to give the agency time to review existing policies. The order, signed by Acting Interior Secretary Scott de la Vega, will momentarily pause the authorization of new drilling on federal land until new personnel assume positions and have time to evaluate the program. Before extending new leases or permits to oil and gas companies, the agency will need to obtain approval from certain officials appointed by the Biden administration.

--Oil and gas companies reported 613 spills last year, 26% fewer than in 2019. In total, companies recorded spilling approximately 4,761 barrels of oil, 32,149 barrels of produced water and 951 barrels of other materials last year, according to a Star-Tribune analysis. That’s a total of about 19,475 barrels less than the year before.

--A piece of legislation advanced by one of the Wyoming Legislature’s standing committees could have significant repercussions on small energy businesses and residents hoping to invest in renewable energy. The bill asks the Public Service Commission to review the state’s current net metering system to ensure utility rates stay fair for all Wyoming residents.

--The Wyoming State Board of Land Commissioners approved a lease for renewable energy company ConnectGen to construct a wind project in Albany County.

-- Just days before the Trump administration left office, the Bureau of Land Management approved a major pipeline project proposed for Wyoming on. The Wyoming Pipeline Corridor Initiative effectively designates about 1,100 miles of federal land for potential pipeline development in the future.

“The Wyoming Pipeline Corridor Initiative is a classic example of Wyoming’s proactiveness and political leadership with respect to energy resources. The approval of the project will be particularly helpful in overcoming barriers both perceived and real in the energy space.”

The plan leaves many questions unanswered, including the status of unpaid debts, workers' compensation and the future of several idle coal sites out east.

Wyoming's power in Washington has taken a major hit lately.

This could be the year Wyoming gets a voter ID law. What changed?

A significant number of co-sponsors almost assuredly guarantees that Wyoming will become the 37th state nationwide with a voter identification law.

Senate File 16 would overhaul the state's net metering system. It received approval from the Senate during its third reading on Friday.

Rep. Chuck Gray sought to tie some agency funding to a moratorium on plant retirements.

Trucks haul coal in 2013 at the Eagle Butte Mine north of Gillette. A group representing landowners has urged state regulators to deny the owner of the Eagle Butte mine near Gillette a permit renewal, due to its lack of federal leases.