Become a Member
Read Today's E-edition
Share This
Former employee: Poor attention to detail to blame for Bison pipeline failure in Wyoming
0 Comments
Share this
1 of 2 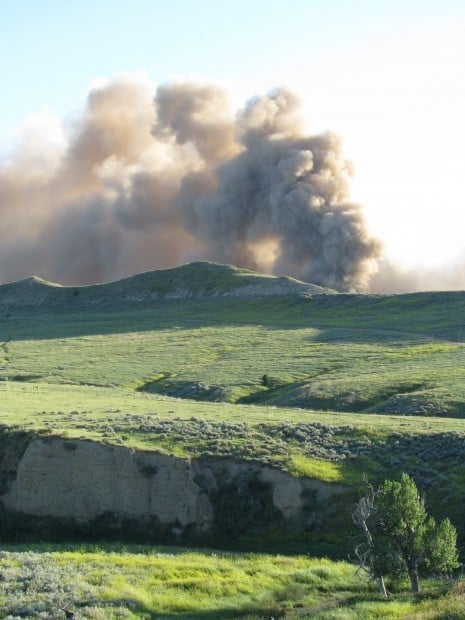 A cloud billows from TransCanada's ruptured Bison Pipeline in northeast Wyoming on July 20. 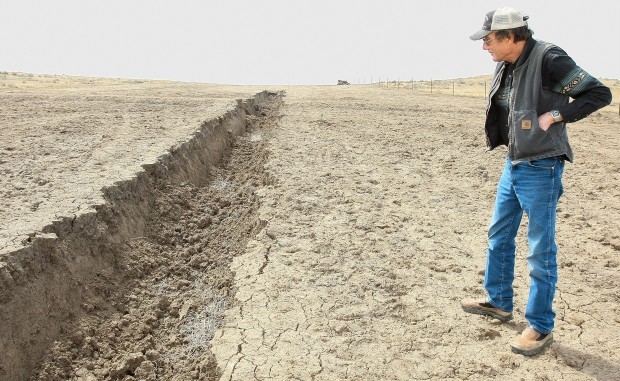 Wade Klauzer stands by a trench left after the soil over the Bison Pipeline sunk this spring on his property in southeast Montana. Landowners said spring revealed big problems along the 97-mile route, which begins in Wyoming's Powder River Basin.

A pipeline company knew its natural gas pipeline in Wyoming had faults before a section of the pipe blew last year, says a former employee who worked extensively on the project.

TransCanada, the Calgary-based firm that owns the Bison natural gas line, put speed ahead of safety getting it in service, says Evan Vokes, a former engineer for the company.

But company spokesman Grady Semmens says TransCanada conducted several tests before the pipeline’s failure in July 2011, returning no problems. And a test that may have shown the eventual source of failure didn’t return data before the company brought the pipeline into service.

In fact, one of the tests may have further damaged the pipeline, Semmens said.

TransCanada will soon be audited by a Canadian pipeline regulator, and the Bison Pipeline incident is still under investigation by the U.S. Pipeline and Hazardous Materials Safety Administration.

Vokes was terminated in May for undisclosed reasons. He said he was sent to oversee work on the pipeline, which runs about 20 miles west of Gillette, before it was activated. He didn’t like what he saw.

“I sent [TransCanada] an email saying they were in serious trouble,” he said. “It was a pretty rough show.”

Vokes said that contracted workers were “running the show” and making key decisions concerning the project.

“Everything was definitely down to the point where the contractor was able to make key decisions instead of the project [owners],” he said. “Whatever the contractor wanted to do, they pretty much could.”

Vokes said he noticed problems with pipe alignment welding, excavation and backfilling, among other things. He said items like rocks were left in the pipeline’s ditch, a possible source of dents for the line.

And it seems the company was aware of the problems. A CBC News report unearthed emails circulated by Vokes and other employees, including one from a construction manager that listed problems with welding and inspection and said the company was “in trouble” with the project. Vokes declined to share similar emails with the Star-Tribune.

Government inspections turned up similar concerns. The U.S. Pipeline and Hazardous Materials Safety Administration visited the site in late 2010, before the pipeline went into service. The agency issued TransCanada a warning in March 2011, citing inadequate quality inspection and testing. The agency said in its warning that there were “discrepancies” between inspection personnel from TransCanada and its contractors and the employees “qualified to perform covered tasks.”

Semmens, the TransCanada spokesman, said last week that the company fully complied with

PHMSA inspection regulations in order to assure the pipeline could operate at full capacity.

“Construction and installation of the pipeline was closely monitored by qualified pipeline inspectors reporting directly to TransCanada,” he said, adding that PHMSA inspected the line and commended the company “for its exceptional performance in this area.”

Semmens also said that the company conducted hydrostatic tests — during which the line is filled with water and pumped at a high pressure — and caliper inspections before the line went into service in January 2011. He said the tests showed the line “met all pipeline safety regulations.”

The company also conducted a test for metal loss “a few weeks” before the line’s activation, but data hadn’t come back when the line ruptured.

A 60-foot section of the 30-inch pipeline exploded July 20, 2011, about 20 miles west of Gillette. TransCanada’s system detected a leakage and closed the flow of gas within 15 minutes of the breach. No injuries or property damage were reported. A nearby landowner told the Star-Tribune it sounded like “a jet fighter going off.”

Semmens said a post-incident investigation revealed what they believe to be the cause of the rupture.

“We believe that the minor damage that occurred during backfilling may have grown as a result of the hydrostatic test and subsequent pressure cycles from initial loading of the line,” he said. “This defect, which had otherwise evaded detection, caused the pipeline to fail.”

The company repaired the line and brought it back into service before the end of that month.

But TransCanada isn’t in the clear. The company will soon be audited by the Canadian National Energy Board. Semmens said the audit was scheduled but expedited by Vokes’ complaints.

The board said that TransCanada’s alleged wrongdoings “do not represent immediate threats to the safety of people or the environment” in a statement announcing the audit, which will evaluate the company’s compliance with Canadian safety regulations.

80 percent its previously allowed capacity. The order also mandated additional testing and drafting of remedial plans by the company. The agency lifted the mandate earlier this month, meaning the line can again transport gas at 1,340 pounds per square inch.

The agency also continues to investigate the explosion. Damon Hill, a PHMSA spokesman, said there isn’t a timeline in place to complete the investigation.

TransCanada has not been fined or subjected to civil litigation resulting from the Bison Pipeline incident.

“We have worked with PHMSA over the last year and a half to ensure the pipeline is completely safe,” Semmens said. “It has been operating since that time with no issues whatsoever.”

Reach energy reporter Adam Voge at 307-266-0561, or at adam.voge@trib.com. Read his blog at http://trib.com/news/opinion/blogs/boom or follow him on Twitter @vogeCST.

﻿TransCanada, the Calgary-based company that built the Bison natural gas pipeline from Wyoming to North Dakota, has contacted several southeas…

﻿A natural gas pipeline west of Gillette exploded Wednesday night. It shook nearby homes and echoed at least 30 miles away but didn’t cause an…

﻿An initial assessment of the ruptured Bison Pipeline in northeast Wyoming shows evidence of “mechanical damage,” says a spokesman for the com…

The repaired Bison Pipeline is shipping some natural gas again, while its owner continues to investigate what caused it to rupture at a site i…

A cloud billows from TransCanada's ruptured Bison Pipeline in northeast Wyoming on July 20.

Wade Klauzer stands by a trench left after the soil over the Bison Pipeline sunk this spring on his property in southeast Montana. Landowners said spring revealed big problems along the 97-mile route, which begins in Wyoming's Powder River Basin.