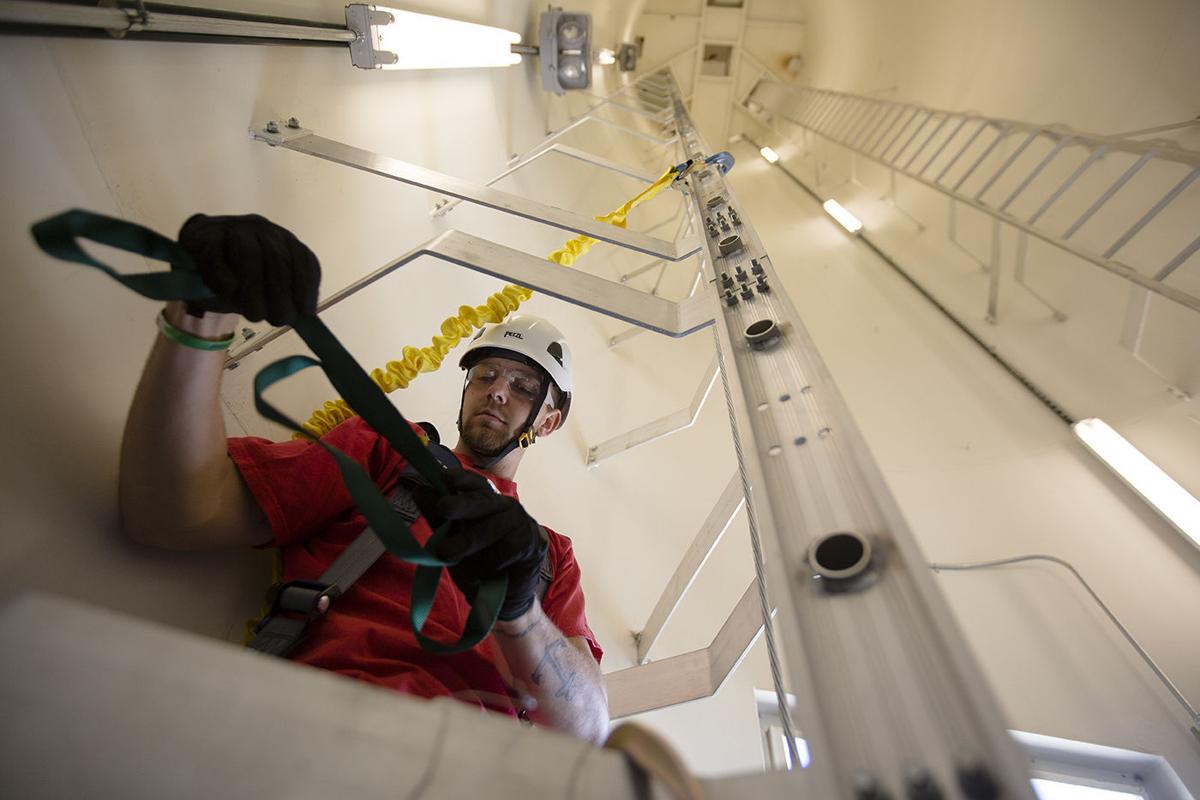 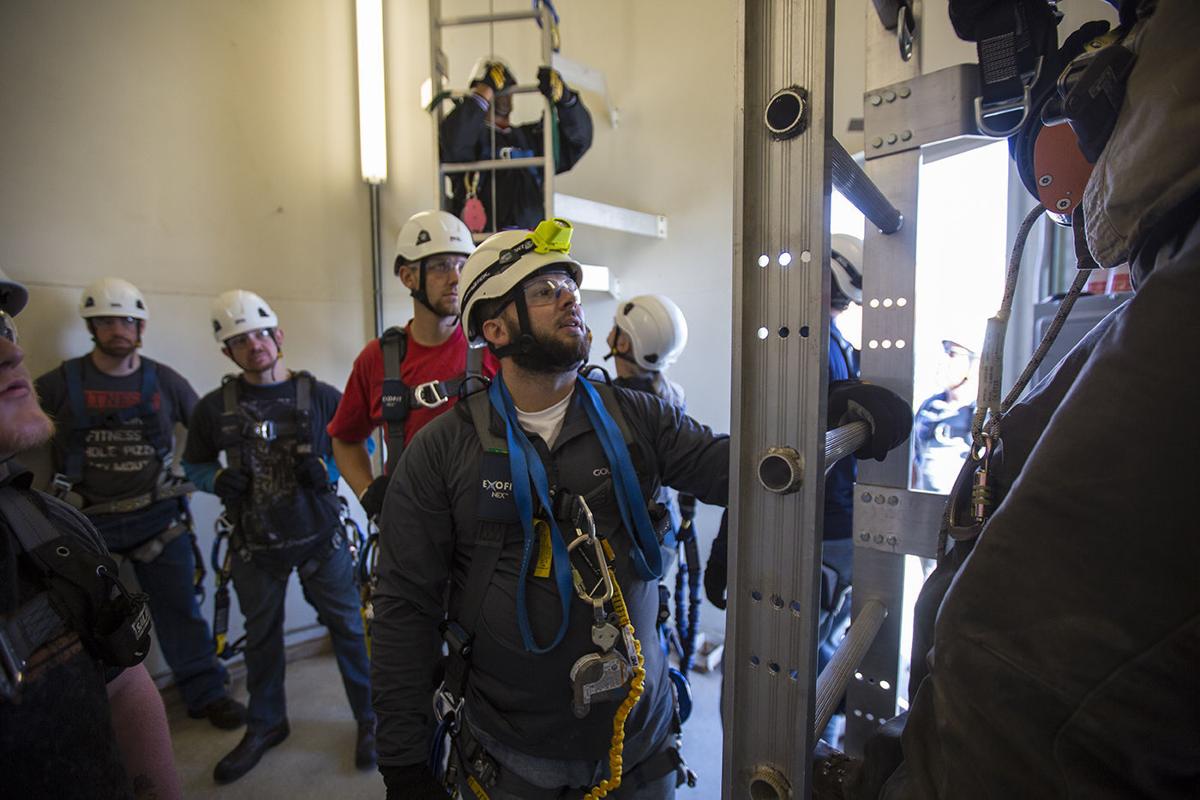 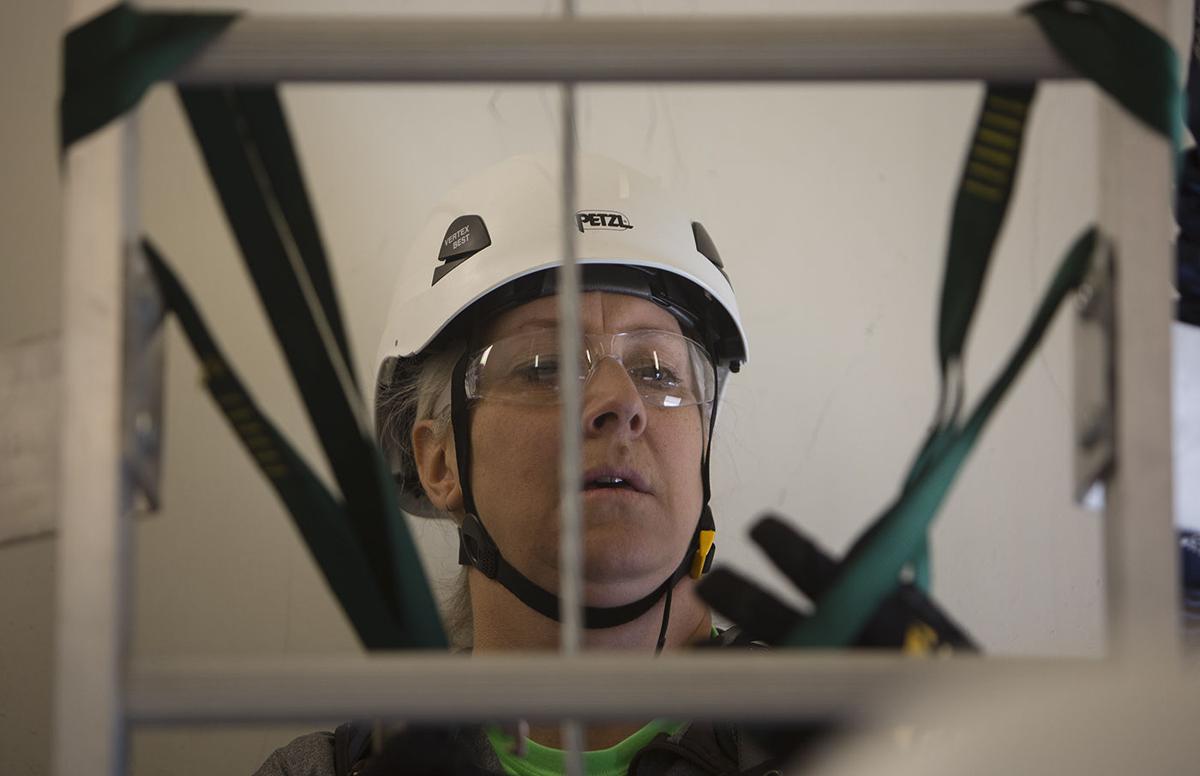 Tami Howe practices ladder climbing with a harness and other equipment inside a climbing tower Tuesday at Casper College during a 10-day wind turbine technician training course offered by Goldwind Americas. Currently living in Laramie, Howe was laid off from a county job due to recent cuts and is now looking for more stable work. 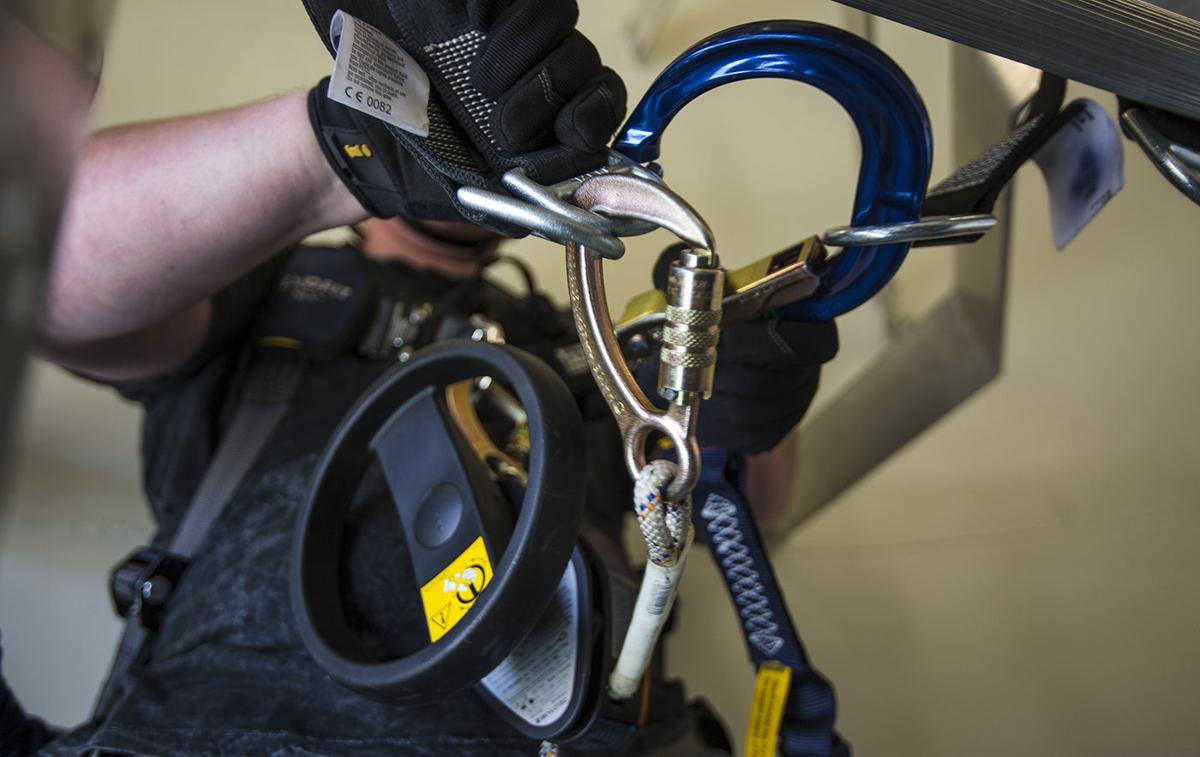 A student practices using a harness and the climbing equipment in a ladder tower at Casper College during a 10- day wind turbine technician training program. 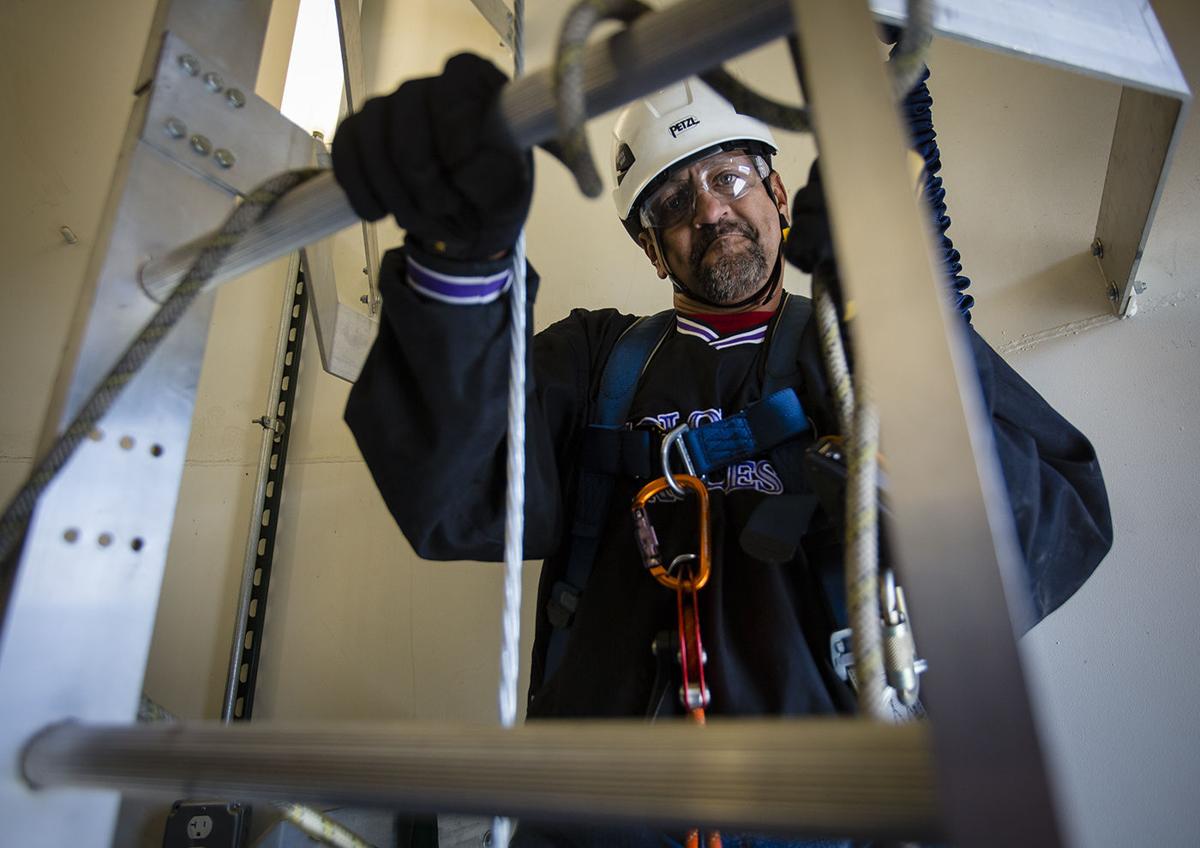 Joe Gallegos ties himself off to a ladder in a climbing tower Tuesday at Casper College during a wind technician training course. Gallegos and his girlfriend are both avid supporters of renewable energy and he, currently a painter in Casper, is looking for a job he can work year-round.

The Casper wind whipped a few of Tami Howe’s white hairs from her ponytail as she tilted her head back and looked at her classmates perched above her.

Howe stood at the base of a training tower, watching her fellow trainees learn how to rescue one another from a fall inside a wind turbine. The students puzzled over the web of ropes and cords that secured them to the aluminium ladders rising above them.

The 50-something former Midwest farm girl was once a military man’s wife, then a single mom, and then a hand on a crew that built custom homes. For the last six years, she worked at the county assessor’s office in Laramie. It was good job, with good people, but she lost it earlier this year in a fossil fuel downturn that swept across Wyoming and left few unaffected.

It’s been a terrifying and defeating year of putting in applications for jobs she didn’t get.

“I don’t mean it unkindly, but Albany County has made it pretty clear that unless I want to be the assistant manager at Wendy’s there is not a lot for me to do there,” she said. “It’s personally difficult to learn that you’re not qualified to keep the schedule … water the plants and answer the phone.”

But Howe can climb. And so Tuesday she was halfway through her 10-day course at Casper College to be a wind technician.

The classes were free, an offer from turbine manufacturer Goldwind America and a hopeful wind developer for Wyoming’s Shirley Basin, Viridis Eolia, that quickly made the rounds in national media as a solution for workers affected by declines in traditional energy industries, like coal.

There are enduring doubts about a wind industry build out in Wyoming, where fossil fuels remain the economic foundation. Still, the industry is pushing to take advantage of the state’s high velocity gusts. Companies like Goldwind are confident that the existing skilled workforce in Wyoming could be its future employees, once it needs them. For now, the companies are training and recruiting for job openings in other states.

Howe and her class of Wyomingites are joining the second fastest growing job in the country, and Goldwind is getting the wheels turning with its presence in Wyoming.

An offer to retrain coal miners and roughnecks for green energy jobs seemed to capture the attention of many outside the Cowboy State, when Goldwind announced its investment in May.

But it’s not a solution that pleases everyone in Wyoming.

Fossil fuel industries pay the state’s bills and then some. They also offers thousands of lucrative positions when prices are good.

Some view wind energy as a threat to coal, which is struggling to compete with cheap natural gas and facing the growing popularity of green energy in other states. Others want wind companies to pay higher taxes, to offset the impact they make to the landscape.

Fossil fuels are part of Wyoming’s identity. Renewables are not.

But for Goldwind, the training taking place in Casper is more straightforward. The company is growing, putting up wind farms down in Texas and up in Rhode Island. And it’s just one company in an industry that’s developing rapidly. In 2016 alone, wind capacity in the U.S. grew by 10 percent.

Wyoming is ranked 15th nationally for installed wind energy. But its potential has companies pushing to take advantage of the blustery winds, the proposed transmission lines necessary to carry power to California and a workforce that’s comfortable with electrical equipment.

The training is one small piece of a larger movement towards an expanding wind industry in the state.

It’s not a replacement of fossil fuels; it’s an addition to the existing economy, said Halligan, the Goldwind CEO.

Wind offers an opportunity for workers who’ve lost jobs in traditional energy fields, he explained. And with thousands of fewer coal, oil and gas jobs in the state, it’s a badly needed lifeline for people needing work. Wind also offers a measure of stability that separates it from the boom and bust job cycles of oil and gas. The projected long-term growth of wind provides the chance at a career that won’t evaporate whenever commodity prices fall.

“I understand it’s hard for people to make a change, and that’s understandable,” Halligan said. “We are just looking for opportunities to supply turbines. We know that eventually it’s going to happen here in Wyoming. We want to be proactive.”

The company’s aims coincide with a need in the state, he said.

“This is an opportunity for folks, right?” he asked. “It shouldn’t be viewed as a threat.”

It was a motley crew crowded into Casper College’s climbing tower, built in 2011 for this purpose, part of a Department of Energy grant that erected similar simulators in other locations. It’s also used to train students at heights for the more traditional industries.

The students clattering up and down the aluminum ladders were strapped to bunches of brightly colored ropes, neon yellow lanyards trailing behind them like umbilical cords. They were as young as 19 and as old as 56 , and they’d come from high school, construction companies and the oil and gas fields. For some, wind is an adventure, for others a second career or a lifeboat to carry them through Wyoming’s economic bust.

“When I was young, I didn’t really want to be a master of anything. I wanted to be a jack of all trades,” said Jeff Taylor, who worked for the oil and gas industry for 36 years, from the time he was 19 until he was laid off in the bust.

Grizzled and affable, the 56-year-old isn’t ready to tap into retirement, and the applications he put into the oil and gas fields haven’t turned into employment.

Besides, he likes this company and he likes the wind industry. It’s clean, he said.

While Goldwind is offering training in Wyoming, jobs aren’t here yet for students like Taylor.

Those at Casper College are aware that their training, 10 days of lectures on wind technology, rescue protocol and an introduction to federal regulations, will immediately qualify them for a potential well-paying job somewhere else.

It’s like in the oil and gas industry, said Taylor, the oil field veteran, who’s familiar with contracts that mean weeks away from home, followed by a long stay back at the house he built himself in Evanston.

“The economy there is not so great,” he said. “I’m going to have to go somewhere regardless to work … I’d just as soon do something like this.”

Three to five years from now, some of the proposed wind projects for the Cowboy State could be up and running. The first phase of Chokecherry Sierra Madre, developed by Power Company of Wyoming, a subsidiary of Anschutz, is under construction to raise 500 turbines near Rawlins and bring them online by late 2020. Viridis Eolia has the second largest proposal, with between 500 and 800 towers to be built near Medicine Bow. The South America firm recently acquired the abandoned brick school in Medicine Bow as a local headquarters. Initial phases of the project were planned to begin next year, going into 2022.

These jobs are coming to Wyoming, said Halligan, the Goldwind CEO.

“There is an opportunity for folks today to move with Goldwind. They can get the basic skills, grow, and as the wind industry starts to mature here in Wyoming, they can always come back,” he said.

And that’s a fine plan for Eric Badura. He’s 19 and was tempted by a job in the trona mines, where his uncle has had a 30-year career. That’s a good job, he said.

But until someone at the mines retires, there aren’t openings, he said. He could be a mechanic, but he’s just “not a truck guy.”

“I’m kind of thinking about my future right now,” Badura said. “Like, I might be a traveling tech for five years, make a bunch of money, explore the U.S. Then I can find a job here in Wyoming later on. I definitely want to live here.”

Howe, the woman from Laramie, also wants to live in Wyoming. But she needs work.

“I’m not going to lose my house over (the downturn),” she said. “Yes, I’ll probably have to go somewhere else. It makes me kind of sad … I’ve got freedom I haven’t had for two decades, including the freedom to seek out more challenging jobs. Jobs that might require travel, and I can go.”

With just less than 250 people, Rock River in Carbon County is not a town with a host of amenities. A picturesque bend in the road propels tra…

Tami Howe practices ladder climbing with a harness and other equipment inside a climbing tower Tuesday at Casper College during a 10-day wind turbine technician training course offered by Goldwind Americas. Currently living in Laramie, Howe was laid off from a county job due to recent cuts and is now looking for more stable work.

A student practices using a harness and the climbing equipment in a ladder tower at Casper College during a 10- day wind turbine technician training program.

Joe Gallegos ties himself off to a ladder in a climbing tower Tuesday at Casper College during a wind technician training course. Gallegos and his girlfriend are both avid supporters of renewable energy and he, currently a painter in Casper, is looking for a job he can work year-round.