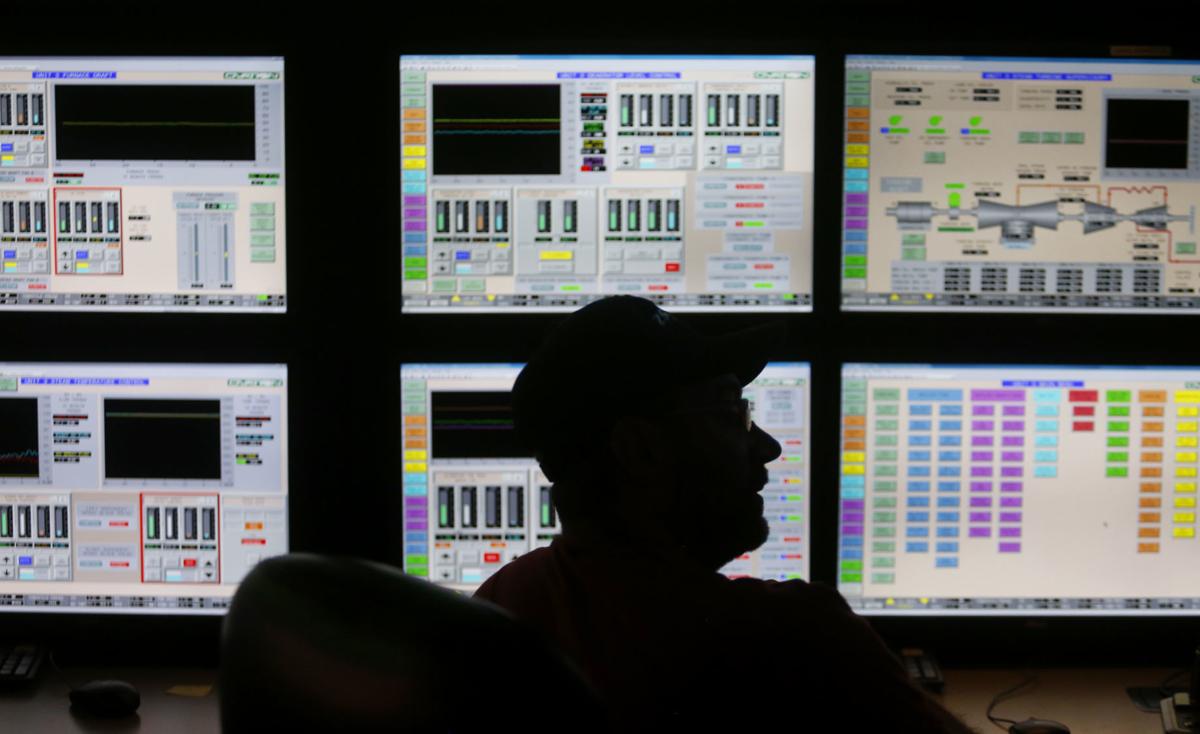 An operator sits at his station in the control room May 16, 2017 at Dave Johnston Power Plant in Glenrock. 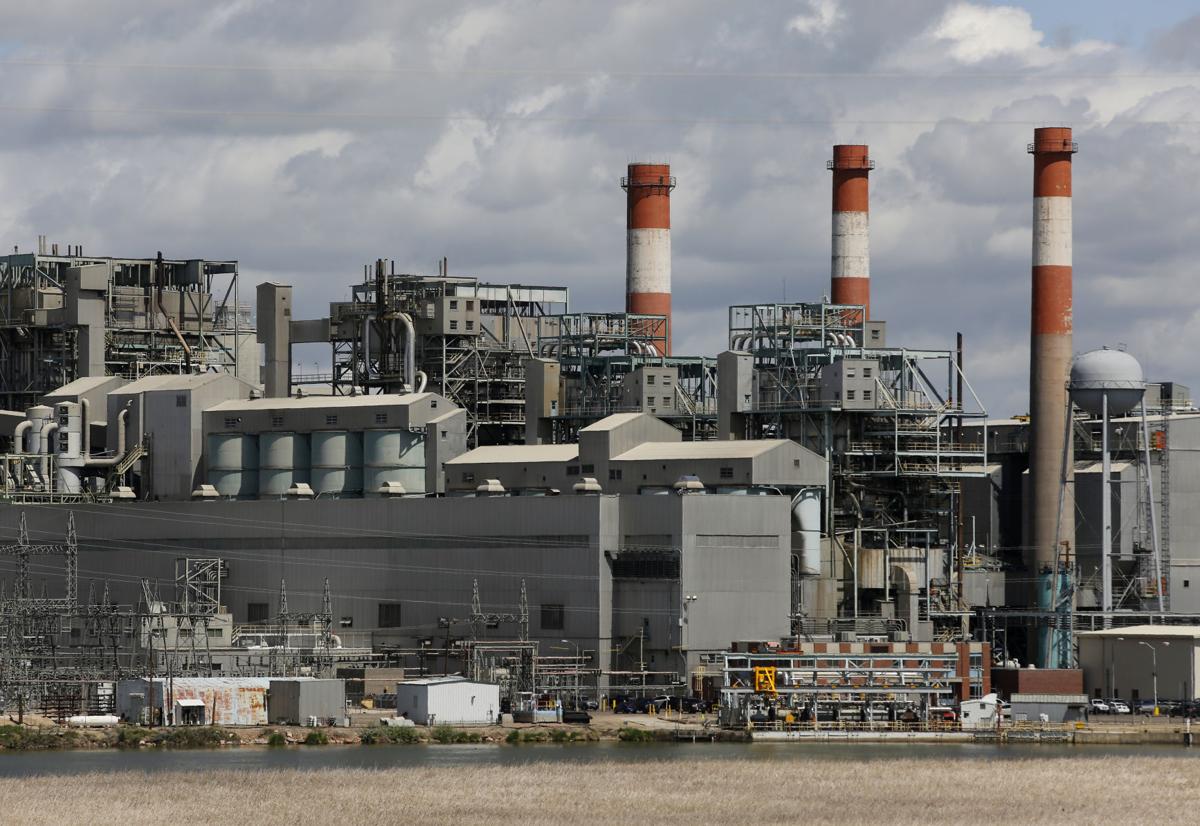 The Dave Johnston Power Plant, pictured May 16 in Glenrock, has four units that came online between 1959 and 1974. Between 2005 and 2012, Rocky Mountain Power spent $900 million on pollution control upgrades at its Wyoming coal-fired plants. On Tuesday, the Trump administration began a repeal of the Obama-era Clean Power Plan, which experts feared could have cut the state’s coal-producing sector by nearly half. 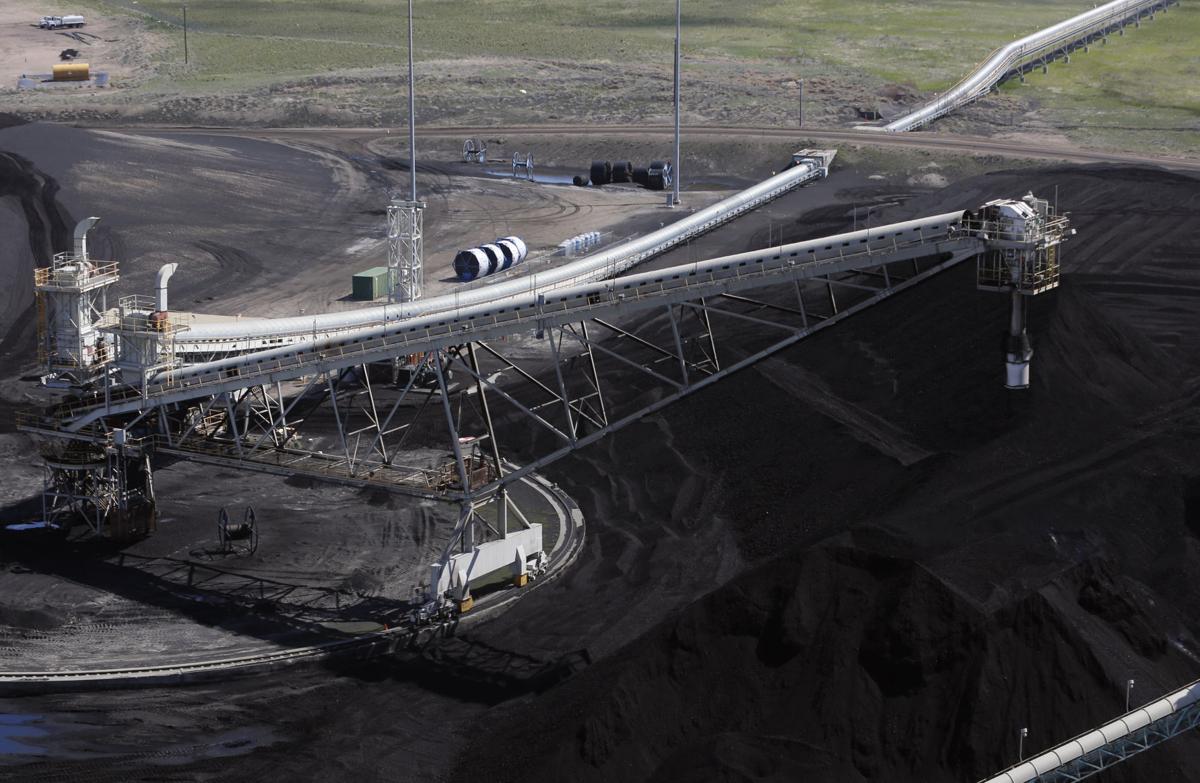 Encased in thick concrete and metal, four massive fires burn every day and every night at the Dave Johnston Power Plant east of Glenrock.

Beneath the coal fires, heavy steel crushers pulverize fist-sized chunks of coal from the Powder River Basin into the fine powder that burns hot and long. It’s a meticulous operation with a simple purpose: Boil water for steam.

Hour by hour, Wyoming coal feeds the fires that ultimately create power for a light switch flicked on many miles away. Dave Johnston has poured millions into complying with environmental regulations to reduce emissions like mercury, and with a nearby source of cheap fuel, it’s not ready to retire.

Some say the writing is on the wall for coal, the black rock that for many years provided power plants like Dave Johnston with reliable fuel.

While locals counter by saying that the coal industry will survive at a new normal, and economists have said Wyoming coal mining will be the last to go down, the Cowboy State doesn’t dictate the electricity market; it simply provides the material.

And many power plants that buy the Powder River Basin material are closing. The small, older plants slated to retire are worrisome enough, but news of large plants considering closure is a somewhat surprising change in direction being watched closely by economists, coal companies and groups that would like to see a transition to renewable fuels.

“The challenges are big, and it’s a question of uncertainty out there for the Wyoming coal industry,” said Travis Deti, executive director of the Wyoming Mining Association. “With the closures, you are obviously losing clients.”

The majority of the 54 coal plants retiring capacity between 2017 and 2025 are relatively small, according to federal data. Many low-capacity plants have already gone under in recent years.

The Environmental Protection Agency’s Mercury and Air Toxins Standard hit a subset of coal mines hardest. They were older, close to the end of their lifelines, and operators chose not to invest to keep them running under the new rules. The American Coalition for Clean Coal Electricity reported that 361 coal plants closed in 2014, due to the MATS rule.

However, the direct impact to coal production was modest, because the older plants provided such a small portion of the total electricity load, experts say.

Now a number of larger, relatively young plants are facing shutdown in the next few years, a disturbing change that number crunchers are still analyzing. The Navajo Generating Station in Arizona, the San Juan Generating Station in New Mexico and part of Colstrip in Montana are some of the most familiar names. But large plants in Ohio and Florida have also joined the mix.

Dave Johnston benefits from the coal mines that are practically in its backyard. More important, producers of electricity in Wyoming aren’t buying and selling power in a competitive race for the cheapest source. Producers like PacifiCorp have mines, power plants and transmission lines. In other areas of the country, that’s not the case. In those regions, the coal burned, or not burned, is often from Wyoming.

The large plants planning to close are in regions that have open markets for electricity, explained Rob Godby, director of the Center for Energy Economics and Public Policy at the University of Wyoming.

The cheapest fuel sources, which are renewables like wind and hydro, always sell first. Coal used to sell next, but since natural gas prices have fallen, gas has shouldered out coal as the cheapest fuel for baseload power, he said.

These large plants were designed to run at high capacity, creating large amounts of electricity to meet demand. When they are scaled back or shut down because cheaper fuels are available, operators say they are too expensive to keep online, Godby said.

“When they are only running at 50 percent, the math just doesn’t pencil out,” he said. “The business plans that justified them no longer exist, so they are just not profitable in current conditions.”

Simply put, some of the titans that seemed guaranteed to provide baseload power for years to come are being considered for retirement because they are too expensive to run.

The shutdowns don’t appear to be sudden, Godby said. The plants will burn off the fuel they have on site and finish out long-term contracts. But when it comes time to renew, they’ll likely bow out.

Tip of the iceberg

Cloud Peak Energy is an outlier in the large companies of Wyoming. The single pure Powder River Basin player avoided the mass layoffs and bankruptcy filings that hit three other mammoth companies that operate in the state.

But eight plants that buy Cloud Peak coal are closing in the next three years, taking some 3,000 megawatts of coal capacity offline, according to the Sightline Institute, a Seattle-based think tank that supports a transition to renewable fuels.

It’s not a one-size-fits-all challenge. The closures will hit different mines with varying severity, said Clark Williams-Derry, director of energy finance for Sightline.

“There were some reports about Cloud Peak and Peabody leading the pack in closures over the next few years; that’s just tip of the iceberg,” he said. “If you look years out, they’ve got problems. They are going to have a significant drop in their production volumes.”

A spokesman for Cloud Peak said the research on coal closures is overblown by those who advocate for renewable electricity but acknowledged the challenge of closures. Coal, particularly Powder River Basin coal, will likely hold onto its market share nonetheless, he said.

“According to all reasonable projections, PRB coal will remain critical to utilities meeting U.S. electricity demand for decades to come, but reductions in PRB coal demand are of concern to all producers,” Rick Curtsinger said in an email. “We have also been encouraged by outreach from coal-fueled plants we have not historically supplied that are now interested in diversifying their supply base.”

The Institute for Energy Economics and Financial Analysis, a pro-renewable organization, reported recently that Peabody Energy will take the largest hit from planned closures in the next two years.

The company said the reduction in coal-fired generation is an evolving trend to which the firm is responding.

“Peabody anticipates total U.S. coal plant retirements of approximately 50 gigawatts over the next five years,” said Charlene Murdock, a Peabody spokeswoman, in a statement. “At the same time, we anticipate the remaining coal fleet to operate at higher capacity utilization levels, largely offsetting total impacts on the U.S. industry.”

Peabody’s Kayenta mine in Arizona feeds the nearby Navajo power plant slated to retire and is among those lobbying to extend the plant’s working life.

That may be the case, but the large plant closures complicate that assumption, said Godby, the UW economist. It’s one of a number of uncertainties in forecasting coal right now, he said.

The most optimistic outlook for coal shows a repeal or reduction in the Clean Power Plan. If the Trump administration can get rid of the CPP, coal production may rise in the short term, followed by a downward trend, Godby said.

But in a state that relies heavily on its coal industry, other forecasts should also be weighed by policy makers, he said.

“My concern is that we have to be careful that wishful thinking doesn’t blind us to other more pessimistic possibilities,” Godby said. “We don’t know what the future holds, but we have learned before not to underestimate the potential downside risks out there.”

A pretty good time of uncertainty

Those in industry are facing the plant closures with resolve, but they also want relief. The first step was to repeal federal regulations, which the administration and Congress have sought to do. Now industry is lobbying for investment.

“One of the things we’ve advocated for is where the renewables have had a lot of assistance getting up and running, we would hope that we would see federal resources, and policy frankly, directed towards building more coal generation facilities,” said Deti, of the Mining Association. “Right now there aren’t any on the horizon. That’s a concern for us.”

Federal subsidies could inspire investors to build new coal plants, he said. Though that idea hasn’t received much traction yet, it is a possibility, Deti said.

Wyoming politicians are doing the best they can, he said. Soon the delegation will have a chance to weigh in on the budget, possibly opening up federal assistance for coal, he said.

Deti’s one complaint is that the administration hasn’t filled enough vacancies in agencies in Washington. From the Department of Energy to the Environmental Protection Agency, coal has new friends in D.C., but it needs like minds throughout the departments, he said.

“The bottom line is we are still in a pretty good time of uncertainty, “said Deti. “In the last few years, as utilities have made their plans for the future, coal wasn’t going to be a very good bet. Things have changed a bit, but there is nothing certain. I think the possibility is there, but a lot still remains to be seen.”

Others see plants closing and markets tightening for the foreseeable future, a tide that politics can’t hold back.

“With all of those coal plant retirements on the horizon, and more being announced every month, it’s clear that the industry is in the midst of long-term, structural decline,” said Williams-Derry, the Sightline analyst. “Politics can bend those curves a bit … but that only postpones the day of reckoning.”

In Glenrock, the Dave Johnston Plant has a tentative retirement data of 2027. If it’s cost-effective, it may operate after that, though PacifiCorp is slowly transitioning to natural gas and wind power.

Until then, 200 workers tend the four fires that keep Wyoming lights on.

Coal rallied in 2017, and began to confront the challenges that remain ahead

The Energy Journal newsletter is on hiatus this week to allow the energy reporter a holiday vacation.

In the “if only” category, exporting coal to Asia is at the top of Wyoming’s list. But a recent $30 million loss from the state’s only oversea…

An operator sits at his station in the control room May 16, 2017 at Dave Johnston Power Plant in Glenrock.

The Dave Johnston Power Plant, pictured May 16 in Glenrock, has four units that came online between 1959 and 1974. Between 2005 and 2012, Rocky Mountain Power spent $900 million on pollution control upgrades at its Wyoming coal-fired plants. On Tuesday, the Trump administration began a repeal of the Obama-era Clean Power Plan, which experts feared could have cut the state’s coal-producing sector by nearly half.