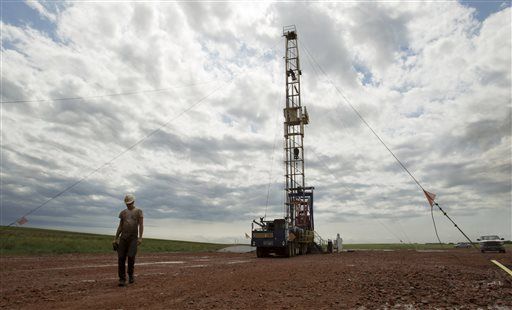 Austin Mitchell walks away from an oil derrick on July 26, 2011, outside of Williston, N.D. Lower oil prices, while good for the broader U.S. economy, are a threat to what has been a surprising and dramatic surge in oil production in the U.S., and to drilling communities that have come to depend on oil money. (AP Photo/Gregory Bull, File) 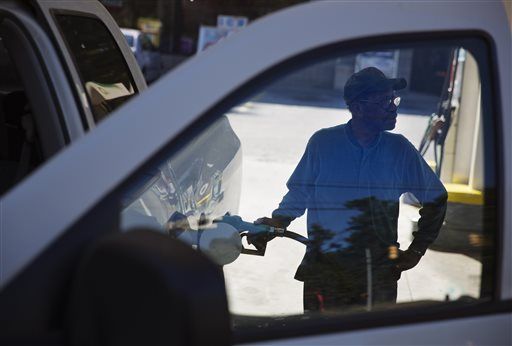 Joe Warner fills up his tank Thursday at a gas station in Atlanta. Lower oil prices, while good for the broader U.S. economy, are a threat to what has been a surprising and dramatic surge in oil production in the U.S., and to drilling communities that have come to depend on oil money. (AP Photo/David Goldman)

WILLISTON, N.D. — Marcus Jundt moved to Williston from Minnesota almost four years ago and has opened four restaurants there since. Food isn't propelling his business, though. It's oil.

"Everything I've done in Williston is a derivative of oil," he says.

That oil has averaged $96 a barrel over the past four years, fueling more drilling, more hiring, and bigger appetites in North Dakota, Texas, Oklahoma and elsewhere. Now oil has hit a rough patch, plunging to $79 from $107 in June on fears of a global glut. Many expect these lower prices are to stick around for a while.

Lower oil prices, while good for the broader U.S. economy, are a threat to what has been a surprising and dramatic surge in oil production in the U.S., and to drilling communities that have come to depend on oil money.

"If the price gets low enough and stays there long enough I'm sure it will affect the number of people and the amount of money that will be spent in the greater community — and I have exposure to that," Jundt says.

Prices would have to fall lower, and stay low for a while, to turn the U.S. oil boom into a bust. Wells that are already producing won't be shut off and enormous projects with long-time horizons will still be built. Many drillers have funded next year's drilling plans by selling oil in the futures market.

Still, a $20 drop in the price of oil means $170 million less in revenue every day for the U.S. oil industry.

Investors are less willing to take on the risk of funding new expansion without hopes for a big reward and oil companies big and small are left with less money to go and drill the next well.

BP, Chevron and Shell told investors last week they would reduce spending on new development because of lower prices.

Mike McDonald, co-owner of Triad Energy, which usually operates 1 or 2 rigs in Oklahoma, said that low prices have stung and now he's not planning to get another rig going after current projects are complete.

Drilling in fields that aren't very prolific will stop because it won't be profitable. For example, drillers in North Dakota's Burke County need $81 a barrel on average to break even, according to the Department of Mineral Resources, while the price is just $28 in McKenzie County, the state's top oil producing county.

North Dakota Department of Mineral Resources director Lynn Helms says companies are looking to cut costs on such things as electricity generation and water disposal. He says the average operating cost of a well has risen 36 percent in the past year to $15,000 a month, mirroring an industry-wide struggle with higher costs.

The analysis firm IHS calculated in a report released Monday that the income that oil and gas companies made on the capital they spent has fallen by half since 2000, even as oil prices increased. "The recent price drop in global crude prices will only add to these financial challenges," said IHS's Daniel Pratt.

For now, boomtowns like Williston are still going strong. Hotels are full, restaurants like Jundt's are packed with tired roughnecks and roads are choked with hulking oil field trucks.

But when drillers cut costs, communities will eventually feel it. "I haven't noticed anything yet," said Bert Anderson, mayor of Crosby, a small town just south of the Canadian border where oil is particularly expensive to produce. But if oil stays at current prices, "eventually it will have an impact," he said.

Helms says that the state's next two-year budget may have to be revised because the preliminary budget forecast was based on $90 a barrel.

On Wall Street, there is considerable disagreement about the duration of lower prices and the potential industry impact. But there's broad agreement that at least the rate of growth in the U.S. will slow.

Goldman Sachs analysts wrote last week that OPEC countries are unlikely to curtail production to nudge prices higher — which means U.S. drillers will have to do so instead.

Bernstein Research's Bob Brackett estimates one-third of U.S. shale oil production is "uneconomic" at $80 per barrel. As a result, he said, producers in the U.S. and elsewhere will cut back and the price will quickly recover.

Thomas Driscoll of Barclays believes economics are "robust" in most of the U.S. shale regions at prices between $75 and $80 a barrel. While he expects the rate of U.S. production growth to slow, he doesn't think production would stop increasing unless long-term oil prices fall to a range of $65 to $75 per barrel.

That's certainly where it would hurt for Nelson Wood. His family's ties to oil stretch back to 1938, when his mother started in the business after an oil discovery kicked off a boom in Illinois.

Since 2001, Wood has grown his company from five to 30 employees, and now has 200 small wells in Illinois. These wells, known as "stripper wells" produce just a few barrels of oil per day. By comparison, a new well in North Dakota might produce 500 barrels per day and a big offshore oil platform might produce 200,000 barrels per day.

For now, Wood has suspended hiring and reduced plans for new wells next year to four from 10. He says his company, Wood Energy of Mt. Vernon, Illinois, is still profitable overall at $80 a barrel, but things are starting to get tight.

Some say a small slowdown could have some upside. Local governments in drilling regions are straining to keep up with demand for new services and infrastructure to deal with population increases and the new economic activity. It might even help drillers who have had trouble finding enough workers and equipment.

"A little bit of a slowdown to give everyone a chance to take their breath isn't all a bad thing," said Ben Sheppard, of the Permian Basin Association in Midland, Texas. "The industry has been white hot for so long."

The stunningly high price of coal is largely the consequence of a supply and demand mismatch in the natural gas market.

If the venture succeeds, the company estimates that the mine will generate upwards of 150 permanent jobs and more than $50 million in revenue for the state over its planned 10-year lifetime.

Taxes on oil and gas drilling on federal lands could go up for the first time in a century, the Department of the Interior says.

Cheney bill would pay states for oil and gas leasing, even when sales aren't held

Wyoming gets $63 million for water infrastructure

Wyoming will receive $63 million next year to support drinking water and wastewater projects as part of the more than $1 trillion Infrastructure Investment and Jobs Act.

The prospect of getting an advanced nuclear reactor has injected new optimism into a community used to weathering the booms and busts of the state’s energy industry.

Carbon capture may not be coal’s savior. But it could spawn an industry all its own.

Wyoming could benefit from the growing carbon capture and storage industry -- even if it doesn't save coal.

Jonah Energy has been recognized by the United Nations for its ongoing efforts to tackle a tricky pollutant.

TerraPower thinks it can bring a new type of nuclear reactor to Wyoming. The state hopes it can. Experts are divided.

Austin Mitchell walks away from an oil derrick on July 26, 2011, outside of Williston, N.D. Lower oil prices, while good for the broader U.S. economy, are a threat to what has been a surprising and dramatic surge in oil production in the U.S., and to drilling communities that have come to depend on oil money. (AP Photo/Gregory Bull, File)

Joe Warner fills up his tank Thursday at a gas station in Atlanta. Lower oil prices, while good for the broader U.S. economy, are a threat to what has been a surprising and dramatic surge in oil production in the U.S., and to drilling communities that have come to depend on oil money. (AP Photo/David Goldman)