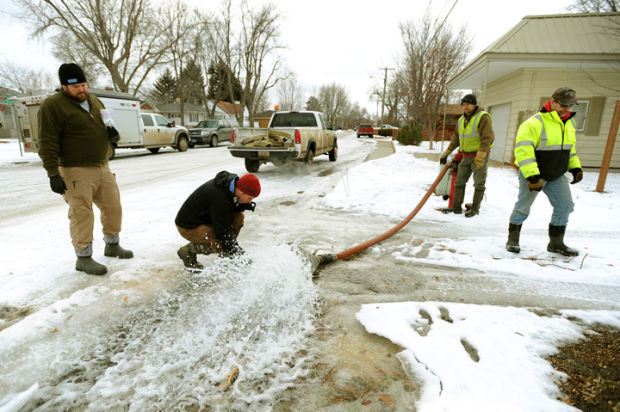 Glendive water is flushed from fire hydrants and tested by the EPA and the Center for Toxicology and Environmental Health on Jan. 21 after the Poplar Pipeline spilled oil under the Yellowstone River. 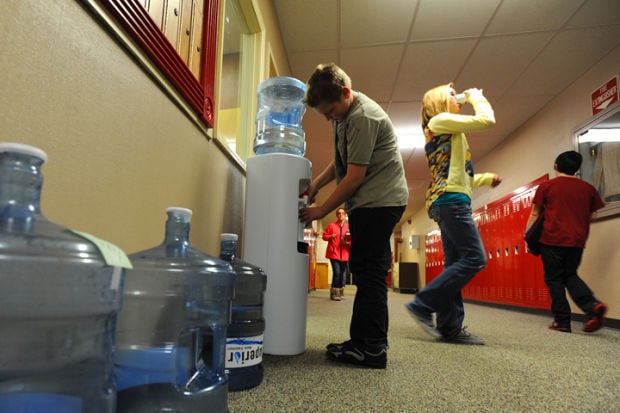 Bottles of water line a hallway as Washington Middle School students get drinking water on Jan. 21, after the Poplar Pipeline spilled oil under the Yellowstone River near Glendive, Mont. 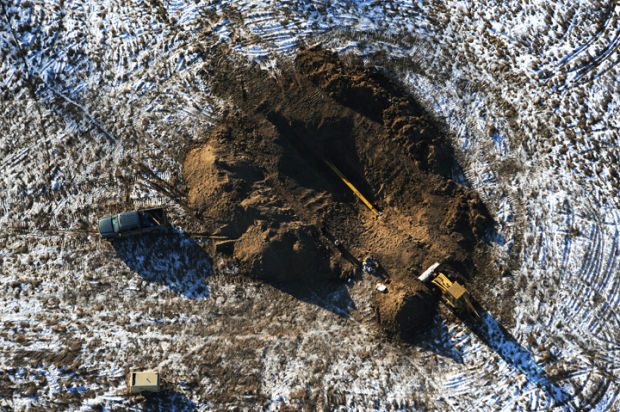 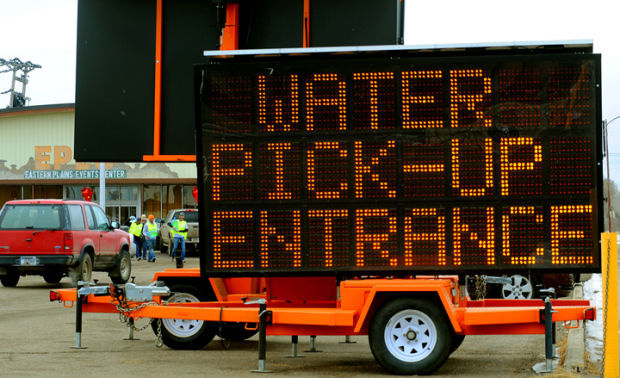 Free bottled water was delivered to Glendive residents on Jan. 21 after the Poplar Pipeline spilled oil under the Yellowstone River near Glendive, Mont. 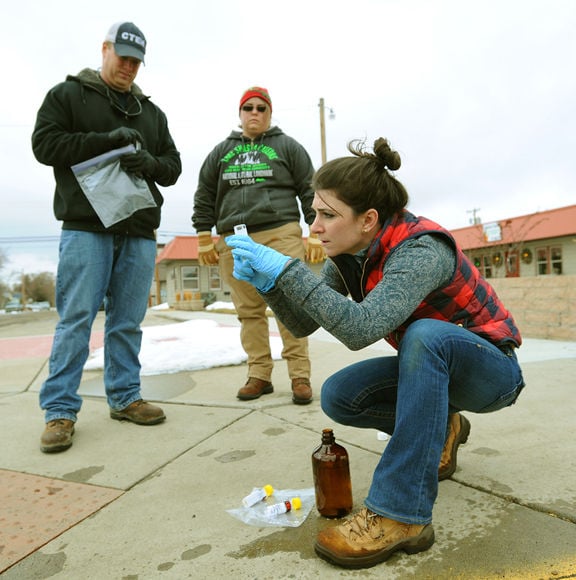 The Casper operator responsible for a pipeline that leaked 30,000 gallons of crude oil into the Yellowstone River has a checkered environmental history, spanning 30 oil spills, multiple federal fines and a warning that the pipeline firm did not learn from past mistakes.

The True family operates two pipeline companies: Belle Fourche Pipeline Co. and Bridger Pipeline LLC. They are operated from the same control room in Casper. Each has recorded a spill in the last eight years, and each has been fined, government records show.

Belle Fourche Pipeline Co. recorded 21 incidents, during which a total of 272,832 gallons of oil was spilled. Those figures did not include a 2014 spill in Wyoming's Powder River Basin, where a corroded line led to a leak of some 25,000 gallons of crude.

Bridger, the operator of the Poplar Pipeline that broke near Glendive, Montana, recorded nine incidents between 2006 and 2014, according to the pipeline administration. Combined, they leaked nearly 11,000 gallons of crude.

The companies have not been issued a fine in any of those instances, federal records show.

"In this day and age, there is nothing more important than the integrity and safety of our pipes," True said. "We do work very hard to remediate any of those spills and learn from them."

The Pipeline and Hazardous Materials Safety Administration initially proposed fining the company $70,000 for a series of procedural violations stemming from a 2006 spill, where 210 gallons of oil were leaked.

One charge stated Bridger failed to conduct a post-accident review of employees' activities during the incident.

"In general, Bridger has a poor compliance history," Jeffrey Wiese, a federal regulator charged with overseeing pipeline safety, wrote in a 2012 order regarding a 2006 oil spill.

The company contended the fines should be reduced, in part, because of its safety record. Regulators rejected that argument.

Wiese wrote that Bridger's failure to conduct a post-accident review was a missed opportunity to learn from mistakes and prevent them.

Bridger contested the charges, all of which were dropped except the post-accident review violation. Last year, the pipeline administration issued Bridger a final fine of $45,000.

Bridger's incident rate was 0.028 incidents per mile between 2006 and 2013, or nearly double the industry average, said Rebecca Craven, program director for the Pipeline Safety Trust, a Bellingham, Washington-based watchdog group. Companies belonging to the Association of Oil Pipelines reported a rate of 0.015 per mile over that time.

The safety trust did not calculate the incident rate for True's Belle Fourche pipeline. Employing the trust's metric -- the number of incidents divided by the company's miles of pipeline -- Belle Fourche's incident rate would be 0.034 per mile.

Belle Fourche was fined $131,900 in 2012 for failing to inspect valves, pressure devices and overflow tanks across its pipeline system, which encompasses 551 miles in Montana, North Dakota and Wyoming. In May 2014, a corroded line caused 25,000 gallons to leak from a Belle Fourche pipeline in a remote section of the Powder River Basin.

The spill took place on BLM land, but the company was not fined for it. BLM did not issue a penalty, and the line fell outside the Pipeline and Hazardous Materials Safety Administration's jurisdiction, said Damon Hill, a spokesman for the agency.

Belle Fourche reported two other spills to the agency in 2014: one of 650 gallons in Wyoming and another of 13,650 gallons in North Dakota, according to pipeline administration records. Fines have not been proposed in either instance.

Third-party strikes occur when a person is digging near a pipeline and hits it, causing a spill. Pipeline paths are marked with a sign telling people to call 811 before digging.

"We’ve put a lot of resources toward getting the one-call message out, for everyone’s safety," True said.

The recent Glendive spill, which prompted the town to temporarily halt drinking water service to its 6,000 residents, has prompted fresh worries over federal regulators' oversight of the country's pipeline network.

"I never questioned who was inspecting it, how they are inspecting it and what they’re pushing through it," said Dena Hoff, a rancher whose property abuts the Glendive spill. "I won’t make that same mistake again."

Shortly after the spill, U.S. Sen. Jon Tester, a Montana Democrat, offered an amendment to the Keystone XL pipeline bill calling for a study of the Pipeline and Hazardous Materials Safety Administration's inspection program. More inspectors are needed to prevent accidents like the one in Glendive, Tester said. The amendment was never voted on and the Keystone bill ultimately passed, with Tester voting in favor.

The Pipeline and Hazardous Materials Safety Administration has one employee stationed in Montana, Hill said.

The administration's western region, based in Denver, employs 18 inspectors. They are responsible for overseeing pipelines in 12 Western states, ranging from Alaska and Hawaii to Montana, Wyoming and Arizona.

Federal regulators inspected Bridger 38 times between 2006 and 2012. The pipeline administration began a new inspection of Bridger shortly before the line broke on Jan. 17, Hill said. An investigation into the cause of the break is ongoing.

Typically, the administration inspects an operator every two to three years, though that can be more or less frequent depending on a company's history and the perceived risk of a line, he said. High-risk lines are sometimes inspected annually.

"The ultimate responsibility rests with the operator itself," Hill said. "They must do a certain number of tests to address the health of the pipeline."

The Poplar break mirrors a 2011 spill on the Yellowstone, in that both involve pipelines running along the river bottom.

In the case of the 2011 spill, flooding exposed an Exxon Mobil Corp. pipeline running along the river bottom. The exposed pipeline eventually broke and spilled 63,000 gallons of crude. The pipeline administration issued Exxon a $1.01 million fine earlier this month.

Bridger's Poplar line also runs along the bottom of the Yellowstone. A preliminary investigation determined 120 feet of 12-inch pipeline was exposed.

In 2012, in the wake of the Exxon incident, Bridger inspected the line and found it was covered by at least 8 feet of soil, said Bill Salvin, a Bridger spokesman. Federal regulations require a line to be covered by 4 feet of soil.

"That is the question that everyone is asking: How did the pipeline become exposed on the river bottom for 120 feet?" Salvin said.

The pipeline administration recently ordered Bridger to implement major upgrades to the Poplar line. The company has said it will drill a new trench beneath the riverbed, using the same techniques employed to drill horizontal oil wells.

Craven, of the Pipeline Safety Trust, says the Bridger and Exxon incidents raise questions about the regulations governing pipeline river crossings. She said it is unclear if pipeline companies are doing enough to address the issue.

"Rivers move around a lot, and they need to be more cognizant of those risks than they have been," she said.

The industry has made improvement in recent years, though further work is needed. Pipelines nonetheless remain the safest way to transport oil, True said.

"As an industry, we do have a zero incident tolerance. We do take this very seriously," he said. "The safety of our pipeline and the safety of the people around it are of the utmost importance to us."

Oil shipments to resume in pipeline that broke beneath Montana river

A Casper company is preparing to resume oil shipments through a pipeline that broke and spewed 30,000 gallons of crude into Montana's Yellowst…

Glendive water is flushed from fire hydrants and tested by the EPA and the Center for Toxicology and Environmental Health on Jan. 21 after the Poplar Pipeline spilled oil under the Yellowstone River.

Bottles of water line a hallway as Washington Middle School students get drinking water on Jan. 21, after the Poplar Pipeline spilled oil under the Yellowstone River near Glendive, Mont.

Free bottled water was delivered to Glendive residents on Jan. 21 after the Poplar Pipeline spilled oil under the Yellowstone River near Glendive, Mont.