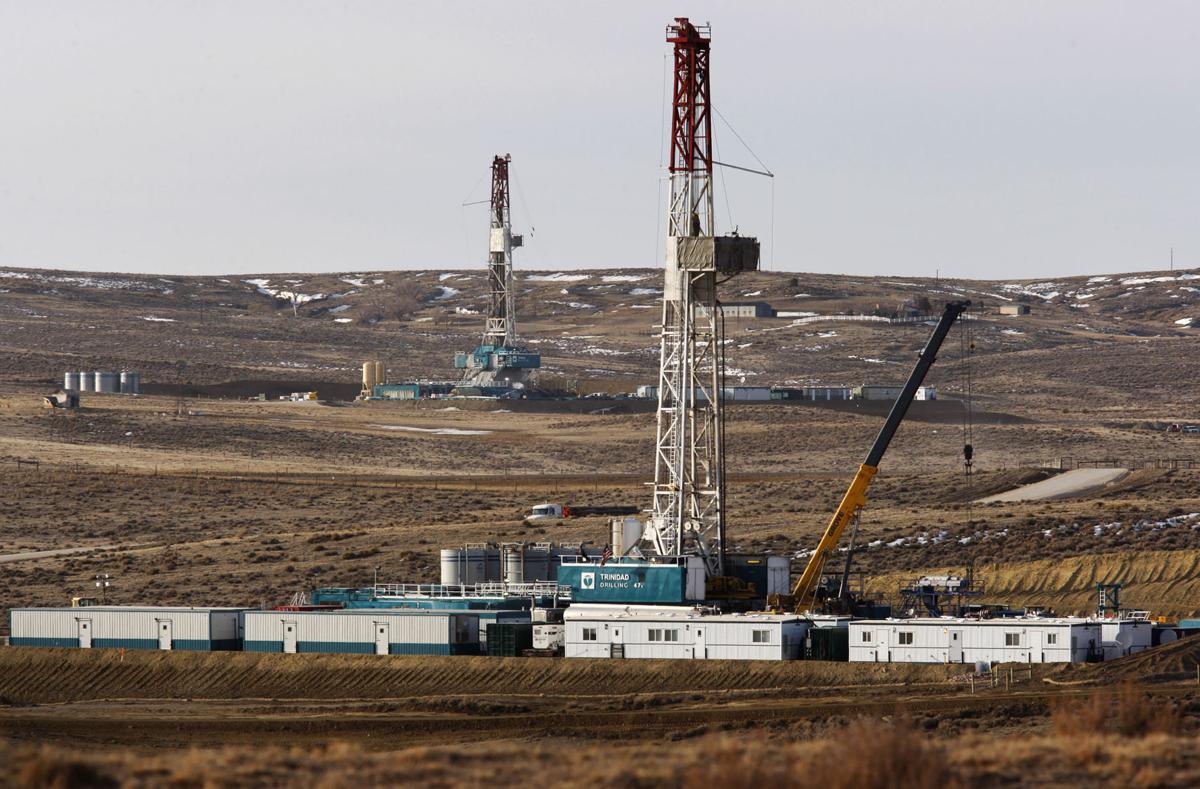 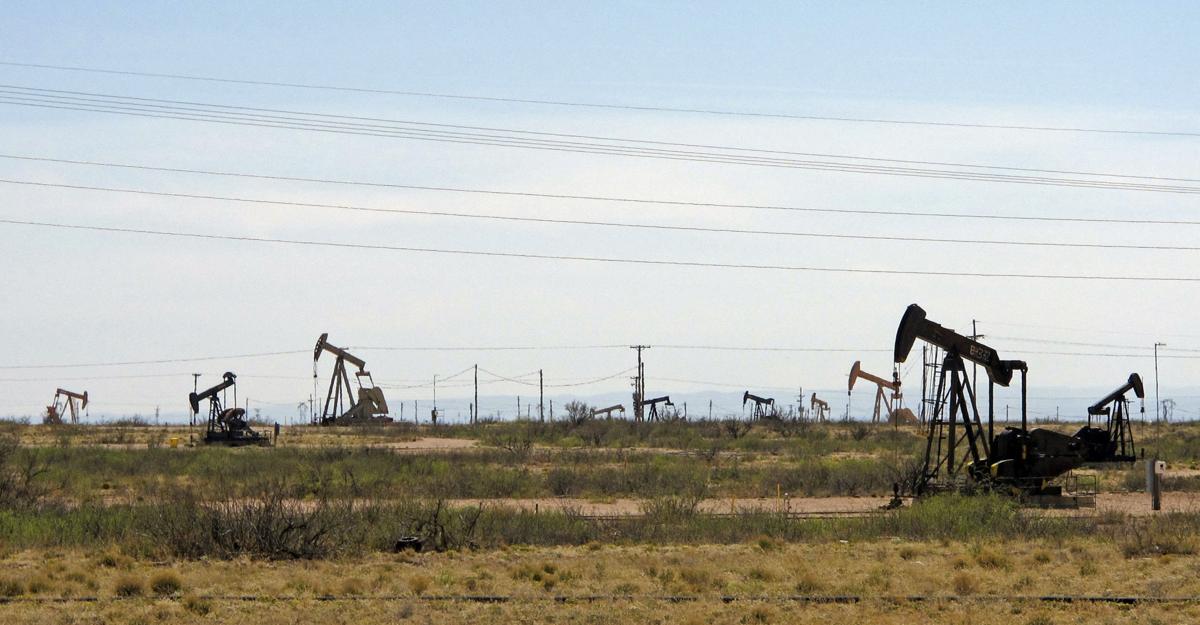 In this April 9, 2014, file photo, oil rigs stand in the Loco Hills field on U.S. Highway 82 in Eddy County near Artesia, N.M., one of the most active regions of the Permian Basin. In the closing months of the Trump administration energy companies stockpiled enough drilling permits for western public lands to keep pumping oil for years. That stands to undercut President-elect Joe Biden's plans to block new drilling on public lands to address climate change. 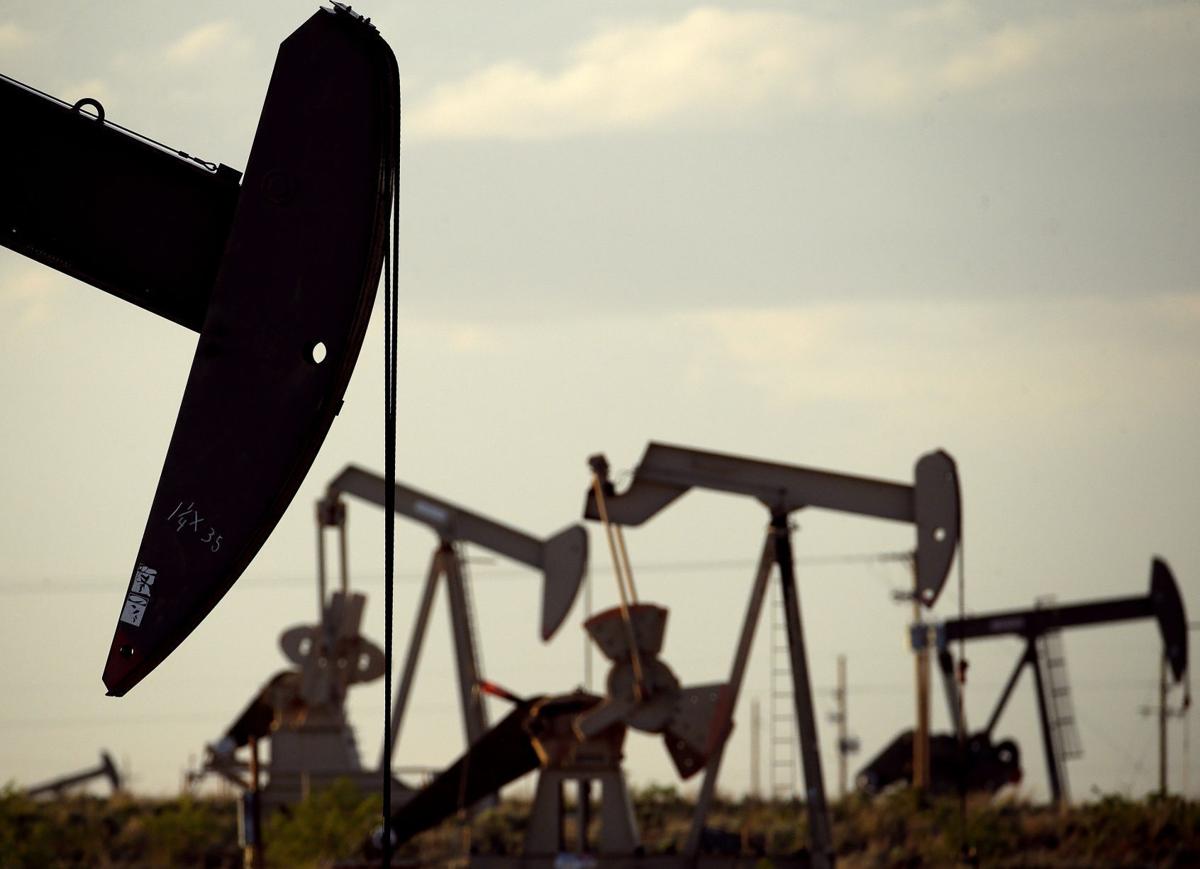 In this April 24, 2015, file photo, pumpjacks work in a field near Lovington, N.M. In the closing months of the Trump administration, energy companies stockpiled enough drilling permits for western public lands to keep pumping oil for years. That stands to undercut President-elect Joe Biden's plans to block new drilling on public lands to address climate change.

In the closing months of the Trump administration, energy companies stockpiled enough drilling permits for western public lands to keep pumping oil for years and undercut President-elect Joe Biden’s plans to curb new drilling because of climate change, according to public records and industry analysts.

An Associated Press analysis of government data shows the permit stockpiling has centered on oil-rich federal lands in New Mexico and Wyoming. It accelerated during the fall as Biden was cementing his lead over President Donald Trump and peaked in December, aided by speedier permitting approvals since Trump took office.

The goal for companies is to lock in drilling rights on oil and gas leases on vast public lands where they make royalty payments on any resources extracted. Biden wants to end new drilling on those same lands as part of his overhaul of how Americans get energy, with the goal of making the nation carbon neutral by 2050.

Companies submitted more than 3,000 drilling permit applications in a three-month period that included the election, according to data from the U.S. Bureau of Land Management. Officials approved almost 1,400 drilling applications during that time amidst the pandemic. That’s the highest number of approvals during Trump’s four-year term, according to AP’s analysis.

In Colorado, a dozen permits are approved or pending to drill in Pawnee National Grassland, a birding destination where wildflowers and cactuses bloom below the buttes.

In Wyoming’s Thunder Basin National Grassland, a prairie expanse that abounds with wildlife and offers hiking, fishing and hunting, oil companies EOG Resources and Devon Energy — which amassed the most federal permits this year — have permission to drill three dozen wells among fields of sage brush.

The administration issued more than 4,700 drilling permits in 2020 — comparable to approval numbers from early last decade when oil topped $100 a barrel, roughly twice the current price.

Making it easier to drill was a centerpiece of Trump’s effort to boost American energy production in part by enticing companies onto lands and offshore areas run by the U.S. departments of Interior and Agriculture.

Under Trump, crude production from federal and tribal lands and waters increased sharply, topping a billion barrels in 2019. That was up by almost a third from the last year of the Obama administration.

But this year the coronavirus pandemic and crashing oil prices caused many companies to curtail their activity.

With markets still in flux and oil producers slashing budgets, major companies nevertheless have been acquiring enough permits to keep pumping through Biden’s upcoming term. The government approved about 500 new drilling permits in September, more than double the same month in 2019.

The oil industry’s fear is that Biden will follow through on campaign pledges and make it impossible or much harder to drill on public lands. “You go from having a champion in the White House, who steers the entire federal apparatus to wanting you to be successful, to someone who is hostile to the industry,” said Tom Pyle, a former Republican aide on Capitol Hill who now leads the industry group American Energy Alliance.

For Biden supporters, the stockpiling threatens parts of an ambitious climate agenda before the Democrat can get into the White House. Oil and gas extracted from public lands and waters generates the equivalent of almost 550 million tons (500 metric tons) of greenhouse gases annually, the U.S. Geological Survey said in a 2018 study.

Trump administration critics say officials enabled the industry to reach its goals, noting that Interior Secretary David Bernhardt and others have boasted how speedily permits were processed.

“Markets, not the BLM, determine how oil and gas developers decide to acquire and develop leases,” he said.

Processing times for completed applications to the BLM have dropped from almost 140 days on average in the last year of Obama’s administration to 44 days in fiscal year 2019, according to congressional testimony by Interior officials. In 2020, some companies had permits awarded in a little over a month, AP found. Other permits took longer but an average could not be determined.

Years worth of permits

To undo the late-term awarding of so many permits, a former senior Interior Department official said the Biden administration could be forced to pay millions of dollars to companies to get them to relinquish drilling rights. Such a scenario played out in pristine areas of Montana where officials spent decades trying to buy out companies with drilling leases near Glacier National Park.

“This is classic, end of administration stuff, but for the Trump administration it’s on steroids,” said Jim Lyons, deputy assistant secretary of Interior under Obama.

Houston-based EOG Resources amassed the most permits this year — 1,024 — including 549 since September, according to AP’s analysis.

In total, EOG has about 2,500 federal permits approved or in progress. “If he (Biden) tries to impose some regulations on how new federal permits are issued, we certainly already have an inventory, a large inventory, of existing federal permits that will sustain activity for several years,” company CEO Lloyd Helms told a November investors conference.

Oklahoma-based Devon Energy collected the second-highest number this year. As the presidential campaign wore on this summer, Devon executives assured investors that the company was amassing permits. By October, Vice President David Harris said the company had enough “federal drilling permits in hand that essentially cover all of our desired activity over the next presidential term.”

Devon’s more than 500 permits secured this year resulted from a long-term business strategy, not a political calculation, said spokeswoman Lisa Adams. “It was something in the works for years,” Adams said.

Biden is nominating New Mexico Rep. Deb Haaland as interior secretary. And Haaland, who co-sponsored the Green New Deal by liberal Democrats, has said she opposes fracking and drilling on public land.

Even if Biden doesn’t immediately ban new permits, he could place a moratorium on them to study the situation in more detail, said Leo Mariani, managing director of equity research at KeyBank Capital Markets.

Most companies have up to two years to act on federal permits, so a one-year moratorium wouldn’t have much impact on oil supply and they could shift production to private or state-owned land, Mariani said.

But such a shift would come at a cost, because royalty rates on private or state-owned land can be twice as much as federal land. “Because the break-evens are so much lower, you’re not going to see every dollar re-allocated to other places,” said Parker Fawcett, analyst for S&P Global Platts Analytics.

With a ban on new federal drilling permits, U.S. production could fall by about 1 million barrels per day, or about 10%, by 2024, Fawcett estimates. “You will have a supply impact.”

Producers started talking about mitigating their risks about a year ago after Democratic presidential candidate and Sen. Elizabeth Warren said she would ban fracking on federal lands, said Artem Abramov, partner and head of shale research at Rystad Energy.

“I definitely wouldn’t expect the New Mexican state government to support radical moves,” Abramov said. “They would push Biden toward a more gradual approach” to the oil and gas industry.

Dumb mistakes you can avoid when investing

UP Energy LLC — better known as Ultra before the company converted to a private company as a result of its second Chapter 11 bankruptcy in September 2016 — purchased Pinedale Energy Partners.

Construction resumes on wind project that has generated national attention

Construction on the Chokecherry and Sierra Madre Wind Energy Project in Carbon County started again for the season on April 12, and the project has generated its fair share of national attention in recent months.

Powerful advancements in offshore wind technology could shift developers' attention away from the Great Plains to the coasts in the near future.

Mining ban considered to protect sage grouse in US West

The Biden administration will consider a ban on new mining on large expanses of public lands in Western states to protect the greater sage grouse.

Tom Kropatsch will serve as the interim supervisor for the group until a replacement is found.

The Dakota Access Pipeline has faced cyberattacks like the one against the Colonial Pipeline last week that forced it to shut down and disrupted fuel supplies to the East Coast.

The technology works like this: Highwire Energy Partners takes excess natural gas, converts it to electricity on a well site and then uses that power for energy-intensive data computing.

Peabody’s Campbell County mines are employing 17% fewer workers than they were this time last year.

The University of Wyoming’s School of Energy Resources is already forging ahead with a project that will make use of injection wells to store carbon.

In this April 9, 2014, file photo, oil rigs stand in the Loco Hills field on U.S. Highway 82 in Eddy County near Artesia, N.M., one of the most active regions of the Permian Basin. In the closing months of the Trump administration energy companies stockpiled enough drilling permits for western public lands to keep pumping oil for years. That stands to undercut President-elect Joe Biden's plans to block new drilling on public lands to address climate change.

In this April 24, 2015, file photo, pumpjacks work in a field near Lovington, N.M. In the closing months of the Trump administration, energy companies stockpiled enough drilling permits for western public lands to keep pumping oil for years. That stands to undercut President-elect Joe Biden's plans to block new drilling on public lands to address climate change.