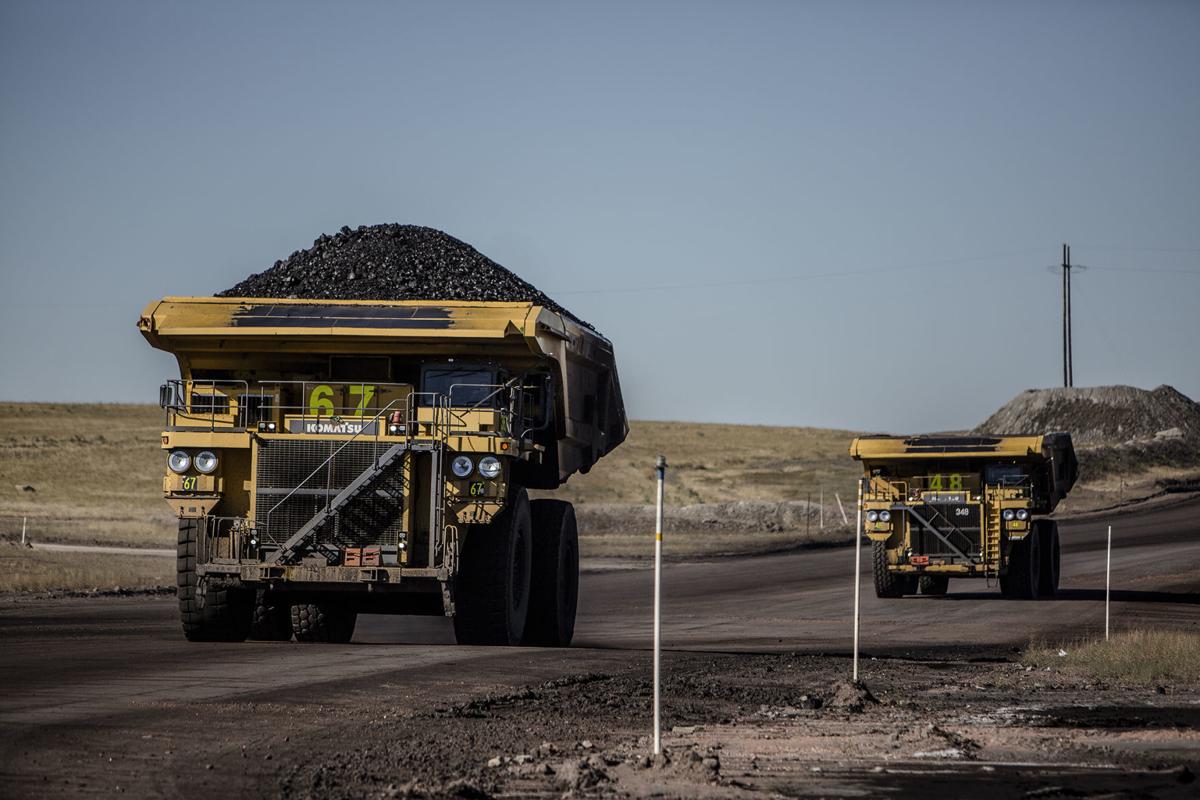 Trucks haul coal from Antelope Mine outside of Wright last year. A new study shows carbon technology could create 2,600 jobs in Wyoming. 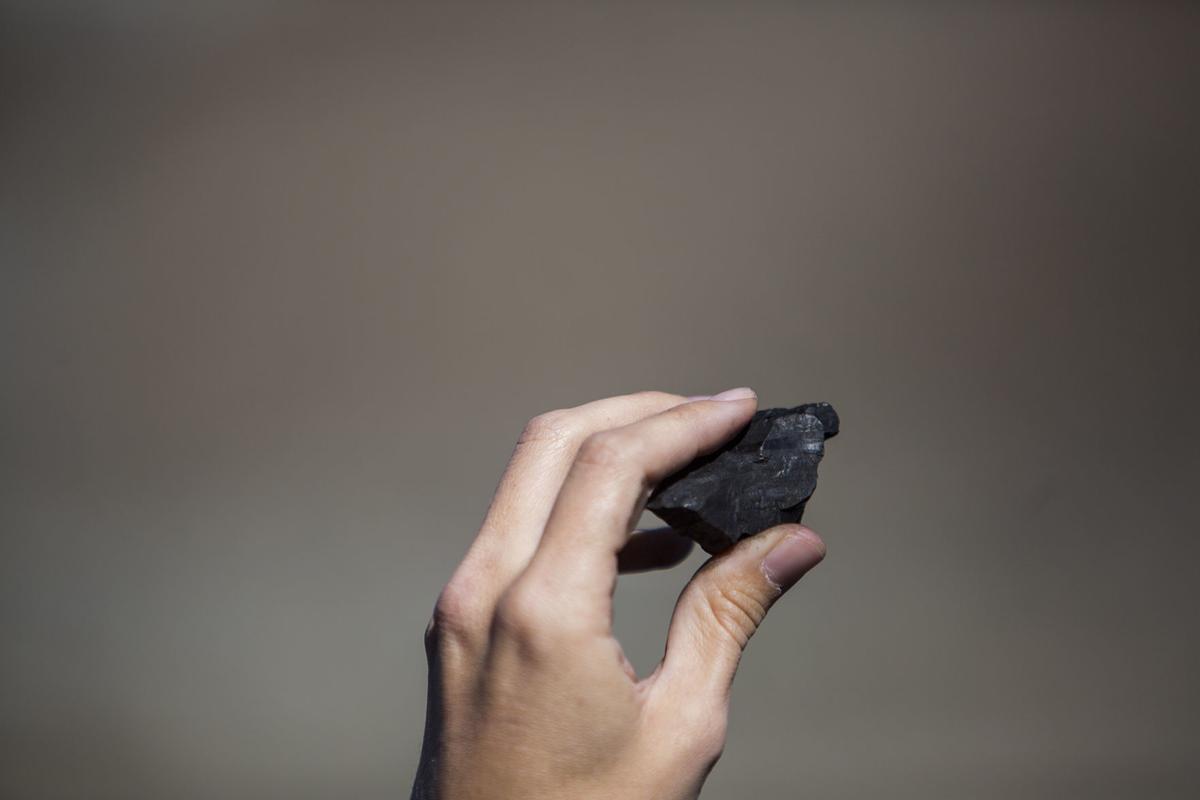 A piece of coal from Cloud Peak Energy’s Antelope Mine outside Wright is shown. A new study shows carbon technology could create 2,600 jobs in Wyoming.

Using coal to make graphene, carbon fiber and other products could support 2,600 Wyoming jobs annually, according to a new report from the American Jobs Project.

From feedstocks to carbon capture, fossil fuels can be used in a growing sector of carbon technology, the report finds. Additionally, the report lays out a series of suggestions on how Wyoming can grow the carbon tech industry and address some of the state’s most troubling problems — like the loss of young people who move to other states.

“Taking practical steps to grow Wyoming’s carbon tech industry can put a lot of people to work and support coal-dependent communities while kick-starting new areas of growth,” said Kate Ringness, co-director of the American Jobs Project and an author of the report.

According to the report, Wyoming is in a unique position in regard to carbon technology if it follows some guidelines, such as setting up funding for early-stage carbon technology in the private sector, encouraging private investors to join a pool of venture capital and reworking the Hathaway Scholarship so that it provides Wyoming student debt forgiveness for working in the state after graduation.

The American Jobs Project credits some of the work Wyoming has already done in the carbon tech sector, from the carbon capture research bays that are partially state funded in Gillette — the Wyoming Integrated Test Center — to loans for startups. But the takeaway from the report is that Wyoming’s need for jobs and economic diversity may partially rest in the state’s legacy industries after all.

Rob Godby, director of the Center for Energy Economics and Public Policy at the University of Wyoming, spoke to the project researchers early on in their work. Though not a participant in the research, he’s seen a draft of the final report published Monday.

The value in the report isn’t necessarily that it solves Wyoming’s challenges. It doesn’t necessarily offer voluminous details on how Wyoming can embrace carbon technology. But it does put a number to the job potential in a sector like advanced carbon, he said.

“I’m not aware of anybody that has tried to quantify the potential job prospects that could occur,” Godby said. “They are the first ones to try it.”

Wyoming is home to a number of efforts that are already applying some of the report’s suggestions. The Wyoming Technology Business Center helps small startups expand. The Wyoming Business Council provides loans — which have recently driven funds into advanced carbon businesses like Atlas Carbon in Gillette. Meanwhile, Gov. Matt Mead launched an economic diversification initiative, ENDOW, in 2015. The starting cost for that push, $2.5 million, resulted in more financial asks for the state, some to fund similar suggestions to the American Jobs report — like wind manufacturing and broadband access.

“The fact that it is not new doesn’t undermine its value,” said Godby of some of the report’s findings. “We have to be reminded from time to time on that.”

Randall Atkins, CEO of Ramaco Carbon, originally came to Wyoming to mine coal. But his business has pivoted to the development of carbon fiber and resin. That switch was a direct result of the pressure on the coal-for-electricity industry that has bruised Wyoming’s economy.

Ramaco has run into conflicts with local landowners in Sheridan over its proposed Brook Mine and its more recent shift to developing carbon products. Critics question how high-tech jobs will be brought to a rural, ranching community in northern Wyoming and have discouraged any public investment in the unproven project.

But Atkins said the potential to create a carbon valley reminiscent of California’s Silicon Valley is locked in Wyoming’s black rock.

“Wyoming can create a new class of jobs in technology and manufacturing, by leading the way in the development of new uses for coal,” Atkins said in an email. “Our state has the most prolific coal resources in the U.S., and the carbon in it can be the agent for a lot of very good things … for Wyoming and for us all.”

One thing the report doesn’t provide easy answers to is revenue. Wyoming’s need for diversification is rooted in its tax reliance on the fossil fuel industries. It’s not just coal jobs, but coal dollars that offer such a boon and a weakness to the state’s economy.

With the existing tax structure, a Silicon Valley in Wyoming could bankrupt the state. That’s because the tax system that now exists wouldn’t pay for the infrastructure demands created by major new development outside the energy sector.

There aren’t easy answers to those questions, said Godby.

Could Wyoming find a way to tax people, property, businesses so that the ship doesn’t rise on fossil fuel dollars alone?

Economists will point to one policy over the other in terms of efficiency, but that may not be the same choice preferred by people, Godby said.

“If it’s not what people are willing to do, then maybe an approach that is less efficient is the [way to go],” he said. “Compromise is never perfect.”

It’s a difficult time to talk about diversification, because often the discussion becomes one of political loyalties, he added.

“Sometimes it gets cast as you are for or against wind or for or against coal,” he said. “That shouldn’t be the way we are looking at this. It should be: How can we get the most value [for our resources].”

And in that debate, it may be helpful to have an outside source like the American Jobs Project, he said, studying Wyoming’s Achilles heel.

Don't say these things during a job interview

Don't waste money on these items

Don't waste money on these items

Little ways to help free yourself from debt

Little ways to help free yourself from debt

Energy Journal: A podcast on energy in the West

The definitive podcast on the energy industry in Wyoming and the West, brought to you by the Casper Star-Tribune.

Can carbon capture save coal?

Wyoming has outpaced other states by investing in technologies meant to soften the many blows coal has faced in recent years. Few in Wyoming m…

Wyoming's governor has walked a moderate path on coal, now candidates are lining up to take the reins

Coal’s colors aren’t as evocative as the red, white and blue campaign signs displayed at stoplights and front yards across Wyoming. But the bl…

In unassuming Wyoming, a quest to change the national and global future of coal

The carbon dioxide drifting out of Dry Fork Station, a coal-fired power plant in northern Wyoming, may come to be part of Gov. Matt Mead’s las…

GILLETTE — Nearly two years to the day after massive coal layoffs in Gillette, Terry Camphouse sat in the dim light of a local bar drinking, a…

Wyoming’s newest coal company in the Powder River Basin plans to mine coal not for electricity, but as a product to be used in cars and airplanes.

Trucks haul coal from Antelope Mine outside of Wright last year. A new study shows carbon technology could create 2,600 jobs in Wyoming.

A piece of coal from Cloud Peak Energy’s Antelope Mine outside Wright is shown. A new study shows carbon technology could create 2,600 jobs in Wyoming.