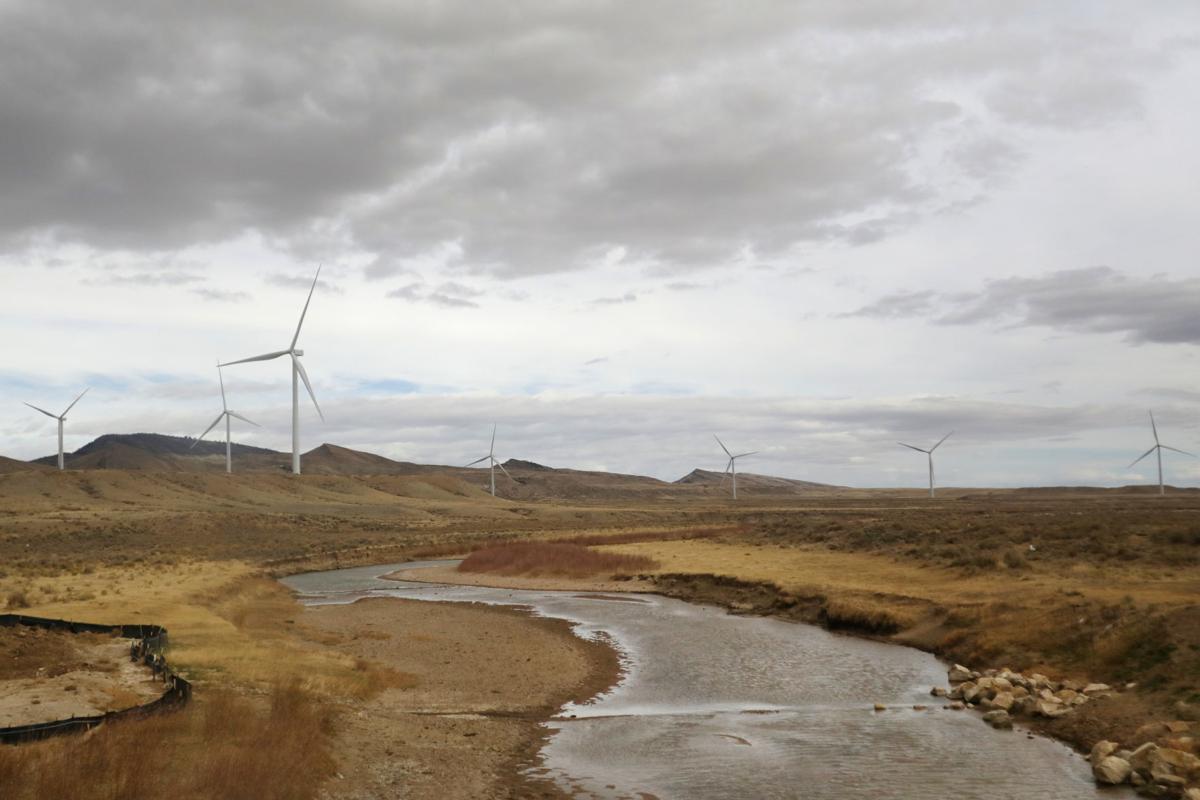 A stream winds through Rocky Mountain Power's Ekola Flats Wind Energy Project on Oct. 20 outside Medicine Bow, where wind turbines are spread out across the landscape. Six new wind farms have been proposed for Wyoming, according to PacifiCorp. 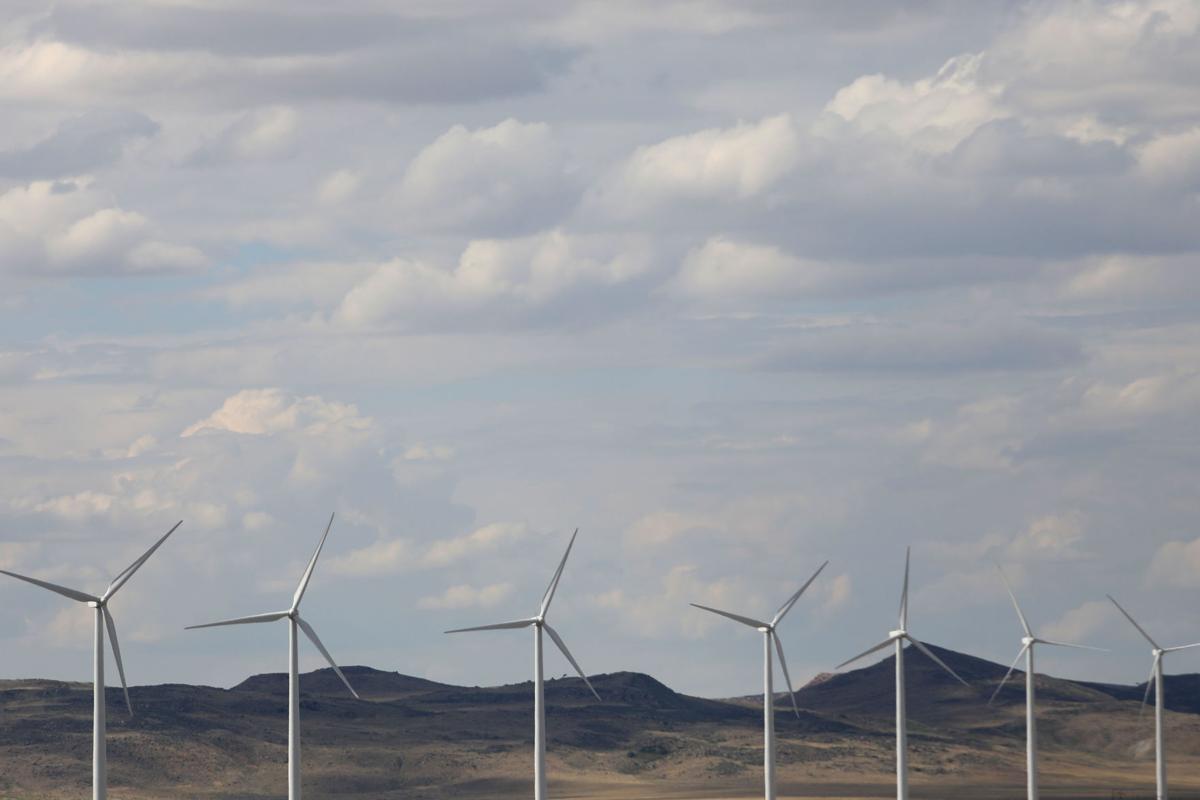 A row of wind turbines spin along the Shirley Basin north of Medicine Bow on Aug. 8, 2019.

Six proposed wind farms could add more than 1,600 megawatts of electricity generation capacity to Wyoming’s grid by 2024, according to an announcement this week by utility Rocky Mountain Power’s parent company, PacifiCorp.

If built, the 19 wind, solar, battery storage and transmission proposals that made PacifiCorp’s shortlist would span four states with a collective capacity of 3,200 megawatts.

The proposals concentrate wind development in Wyoming and Idaho, and solar development, including battery storage, in Utah and Oregon. Nearly 1,000 megawatts of battery capacity is proposed across the two states.

Unlike power plants, wind turbines and solar panels can’t generate electricity on demand. Installed battery capacity reduces the volatility of renewables by storing unused electricity and releasing it to the grid later on. In recent years, the costs of battery storage have plummeted.

“Most of our early wind and solar projects, of course, were tied directly to the transmission system. They were dependent upon when the resource was available, when the wind was blowing, or when the sun was shining,” said PacifiCorp spokesman David Eskelsen. Battery storage eliminates those limitations.

While PacifiCorp has trialed battery storage through small-scale demonstration projects, this would be its first utility-scale battery installation.

The shortlist announcement comes on the heels of PacifiCorp’s Energy Vision 2020 initiative, which added more than 1,000 megawatts of wind resources and transmission to its generation capacity.

PacifiCorp’s latest round of renewable development began in October 2019, when the company’s biannual economic analysis identified renewables as a highly cost-effective electricity source.

The utility’s call for proposals the following July yielded feasible bids totaling more than 28,000 megawatts of capacity. Over the year that followed, the company cut its original list of bids down by nearly 90 percent. It developed the shortlist in May and finished evaluating the final 19 projects earlier this month.

It’s still early for the shortlisted projects. They’ve already undergone scrutiny from PacifiCorp and two independent evaluators, but contract negotiations between the utility and the projects’ third-party developers, local and state permitting processes and state regulatory reviews are yet to come.

Wyoming’s six new wind farms would be built by their developers. During early contract negotiations, PacifiCorp would decide whether it intends to purchase power directly from a facility over a set period of time — usually 20 years — or buy the entire project from the developer after construction is complete.

Though the projects’ locations have not been disclosed, if they’re approved, they could bring jobs and revenue to the state. Wyoming’s existing wind generation tax generates a little over $4 million annually.

Past attempts to raise Wyoming’s tax on wind energy have failed in the Legislature.

Photos: The wind farms that have sprung up from Wyoming's prairie

Why there's still (almost) no utility-scale solar in Wyoming

Wind farms have been popping up all over Wyoming. Solar arrays, for the most part, haven’t.

More federal stimulus money could be coming to Wyoming.

The companies that own the two biggest U.S. coal mines have both sought royalty reductions at some Wyoming mines, despite outperforming economic projections in the second quarter of 2021.

All three hydrogen projects chosen as grant finalists by the Wyoming Energy Authority two weeks ago have been awarded full funding, the agency…

Wyoming saw the sixth-highest increase in renewable capacity across all states last year.

In a deal with Sen. Joe Manchin of West Virginia, whose vast Energy Infrastructure Act carries a $95 million price tag, Barrasso negotiated a change to the proposed reauthorization of the Abandoned Mine Land Reclamation Program that aims to lessen the burden on coal producers without jeopardizing reclamation funds.

The council approved the 504-megawatt wind farm with 29 additional conditions.

Bearcat, which bid close to $1.2 million for approximately 100 Wyoming coal-bed methane wells in 2010, ceased known operations in 2016. It failed to provide nearly $200,000 in additional bonds requested by the commission in 2016 and stopped submitting production reports in 2017.

After months of uncertainty and heated public debate, the Albany County Board of Commissioners voted unanimously on Tuesday to grant a key per…

A stream winds through Rocky Mountain Power's Ekola Flats Wind Energy Project on Oct. 20 outside Medicine Bow, where wind turbines are spread out across the landscape. Six new wind farms have been proposed for Wyoming, according to PacifiCorp.

A row of wind turbines spin along the Shirley Basin north of Medicine Bow on Aug. 8, 2019.