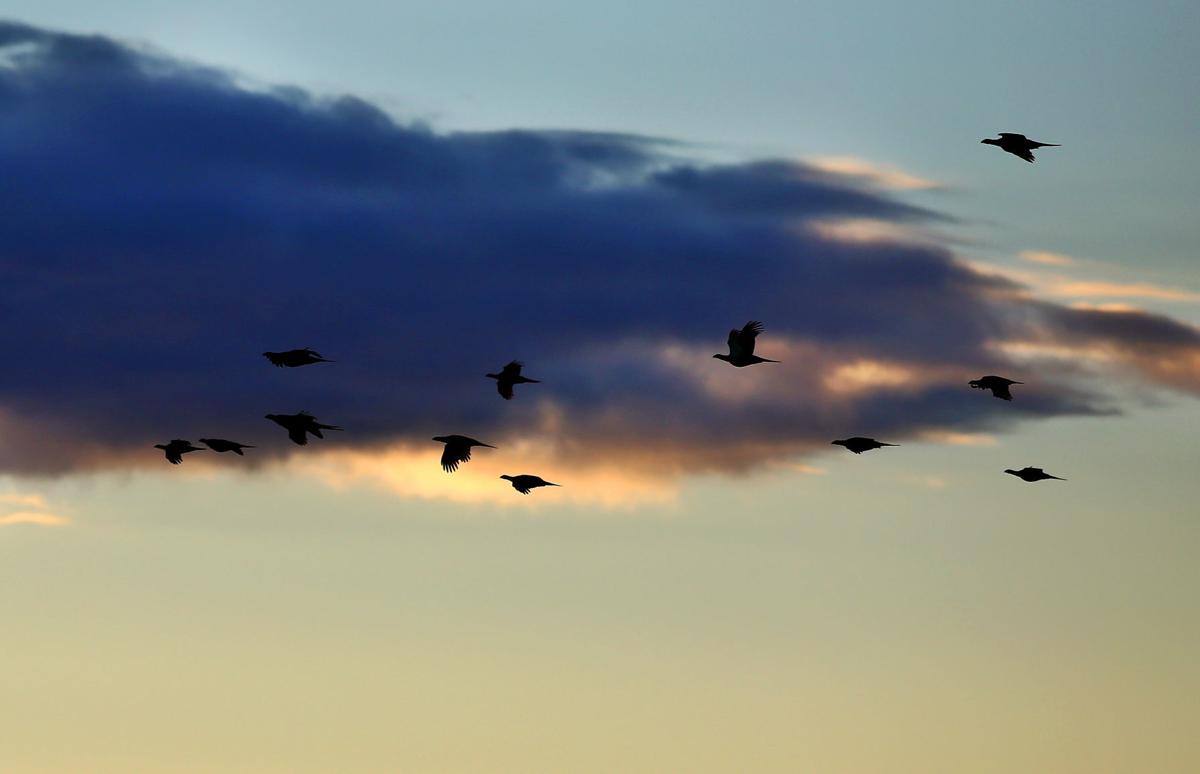 A flock of sage grouse crosses the sky just after sunrise on Feb. 9, 2015 near Pinedale. The state's game and fish commission has decided to extend over half a million dollars for sage grouse conservation. 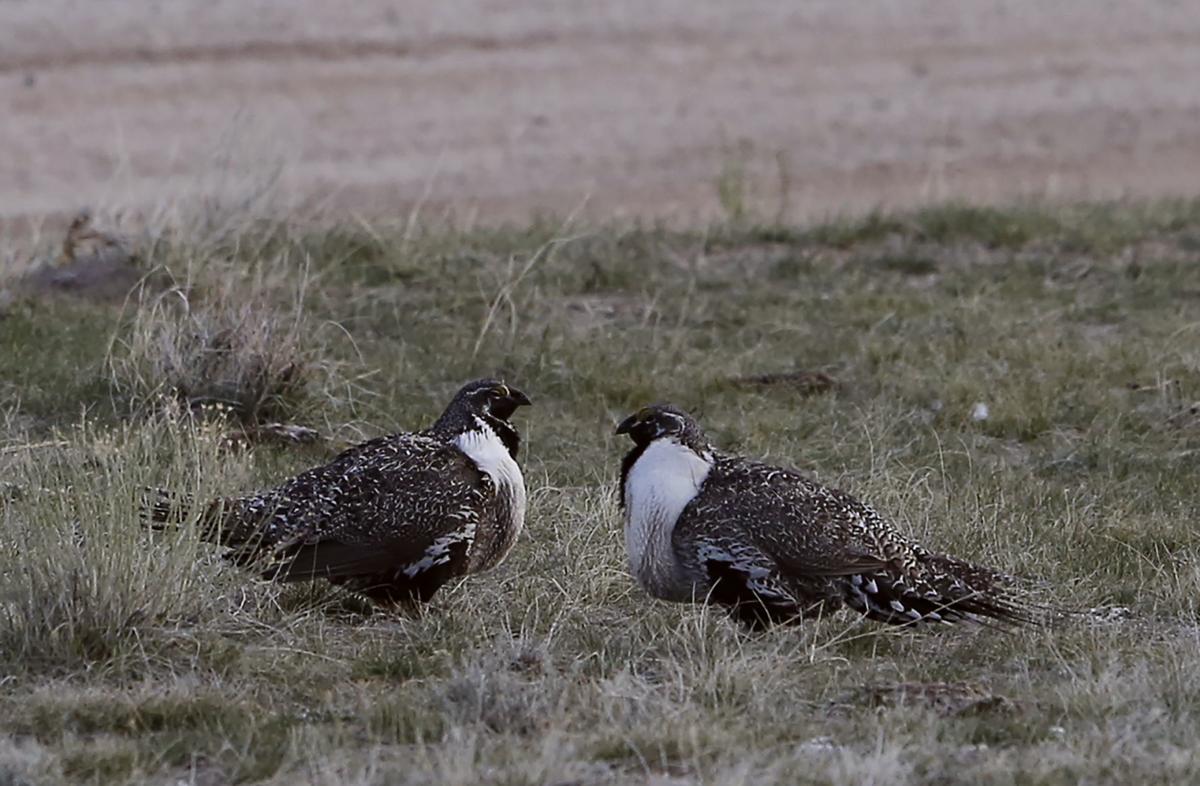 Two male sage grouse compete for a small piece of territory in 2017 on a lek in southern Natrona County.

The Wyoming Game and Fish Commission gave preliminary approval to extend $548,000 for sage grouse conservation projects. The state’s eight sage grouse local working groups can submit proposals to the commission and any approved projects could launch as early as July 1.

The South Central Sage Grouse Local Working Group met both virtually and in person Monday afternoon to advance a selection of conservation projects, which included research into the effects cheat grass, wind turbine development and other activities can have on sage grouse population numbers.

The speckled, round bird has captured the attention of the West for decades. Regulators across the country have turned to Wyoming to set a protection plan for the imperiled animal. The state is home to more sage grouse than anywhere else in the world. But that ranking comes with heavy responsibilities.

Working groups have sought to balance the need to protect the state’s dominant energy and agricultural industries, while also avoiding sage grouse population slumps. Sage grouse-friendly habitat has been severely compromised for several years, relegated to smaller and smaller parcels of land across the country. The bird often avoids even the slightest of human disturbances. Official lek data for 2020 will not be published until August, according to Leslie Schreiber, Wyoming Game and Fish Department biologist, but some initial population monitoring numbers show the bird is still in trouble.

Judge strikes down US energy leasing rules in bird habitat

The past year has been significant for the bird in Wyoming on both the state and federal level.

Gov. Mark Gordon signed an executive order in August to amend the rules governing development in 15 million acres of sage grouse core habitat. The order not only upheld existing conservation strategies from a previous order but also added new data collection requirements and outlined guidelines for reclamation of disturbed habitat.

The Wyoming Legislature also passed a bill this year that gives the state statutory authority to uphold its compensatory mitigation program. The governor signed the bill into law on May 18. Though the state now oversees a compensatory mitigation program as a way to offset some of the human-caused damage to greater sage grouse, Wyoming regulators technically do so without the statutory authority. The Greater Sage-Grouse Compensatory Mitigation Act changed that.

The state encourages developers to avoid or minimize the impact of activity on land leased in core sage grouse habitat. If that’s not possible, developers may be required to offset negative impacts in core areas, like loss of habitat or disruption, by participating in the compensatory mitigation program. Put simply, compensatory mitigation requires developers to offset disruption to sage grouse core areas by supporting the preservation of the bird’s habitat in other ways.

The Board of Land Commissioners will oversee the compensatory mitigation credit system and institute rules. The Office of Lands and Investments has drafted proposed rules and they are now open to public comment.

Meanwhile, the Bureau of Land Management’s public comment period for several draft environmental impact statements related to a revised sage grouse management plan closed last month. Many conservation groups said the contested sage grouse plan weakened 2015 protections for the bird. (Last year, the BLM introduced amendments to the 2015 protections, but a U.S. District Court judge issued an injunction to block the rollout of the changes due to violations of the National Environmental Policy Act, or NEPA.)

Advocates for stronger sage grouse protections said the latest management plan still fails to address the court’s concerns or adequately protect the habitats critical to the survival of sage grouse.

Wyoming’s Sage-Grouse Implementation Team, a group of two dozen experts from some 20 different agencies, will be meeting virtually on Thursday.

Debate over the speckled, chubby bird endemic to Wyoming’s sagebrush landscapes has inflamed tensions between conservationists and energy deve…

2019 was a big year for sage grouse news, but many in 2020 are keeping a watchful eye on the bird

The Legislature will examine the Greater Sage-Grouse Compensatory Mitigation Act this year, as the bird's numbers continue cause concern.

A flock of sage grouse crosses the sky just after sunrise on Feb. 9, 2015 near Pinedale. The state's game and fish commission has decided to extend over half a million dollars for sage grouse conservation.

Two male sage grouse compete for a small piece of territory in 2017 on a lek in southern Natrona County.