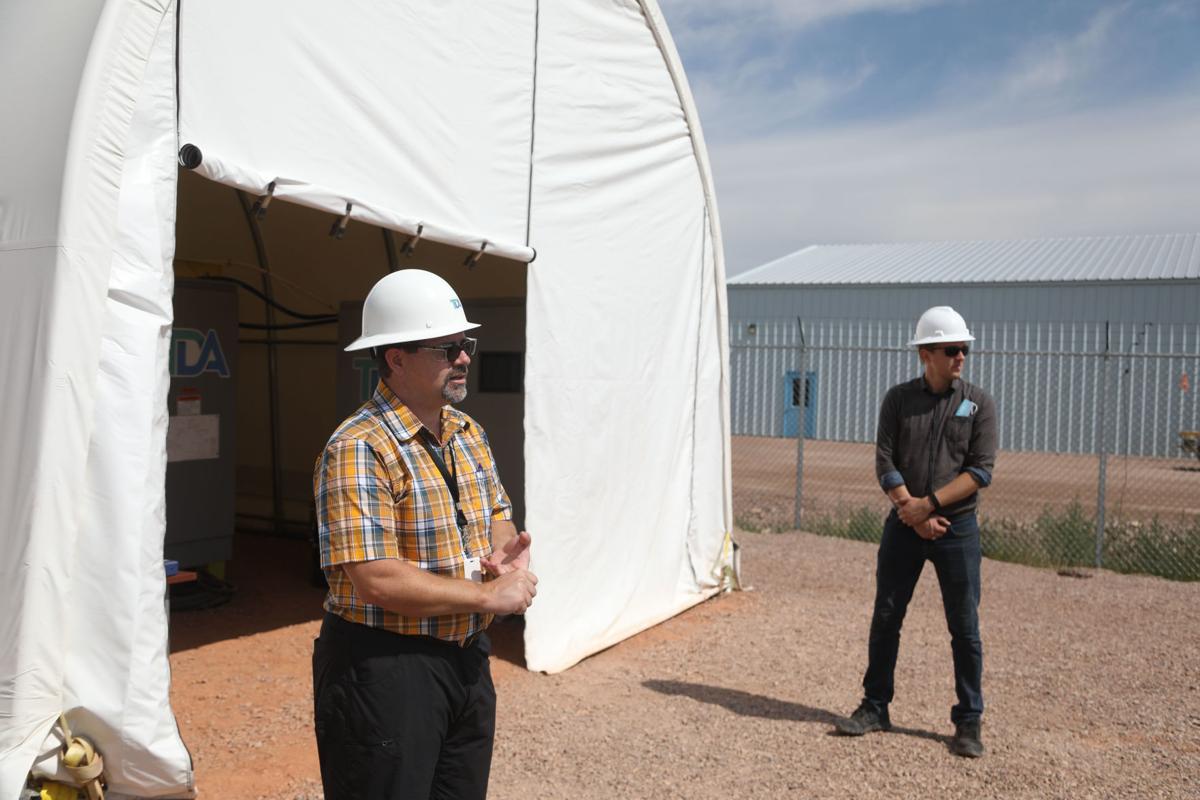 Dave Gribble of TDA Research gives a tour of the first carbon capture research project on the ground at the Integrated Test Center outside Gillette in August. Wyoming's governor has maintained that the state can eliminate carbon pollution while still burning fossil fuels, in part by deploying carbon capture technology at coal plants. 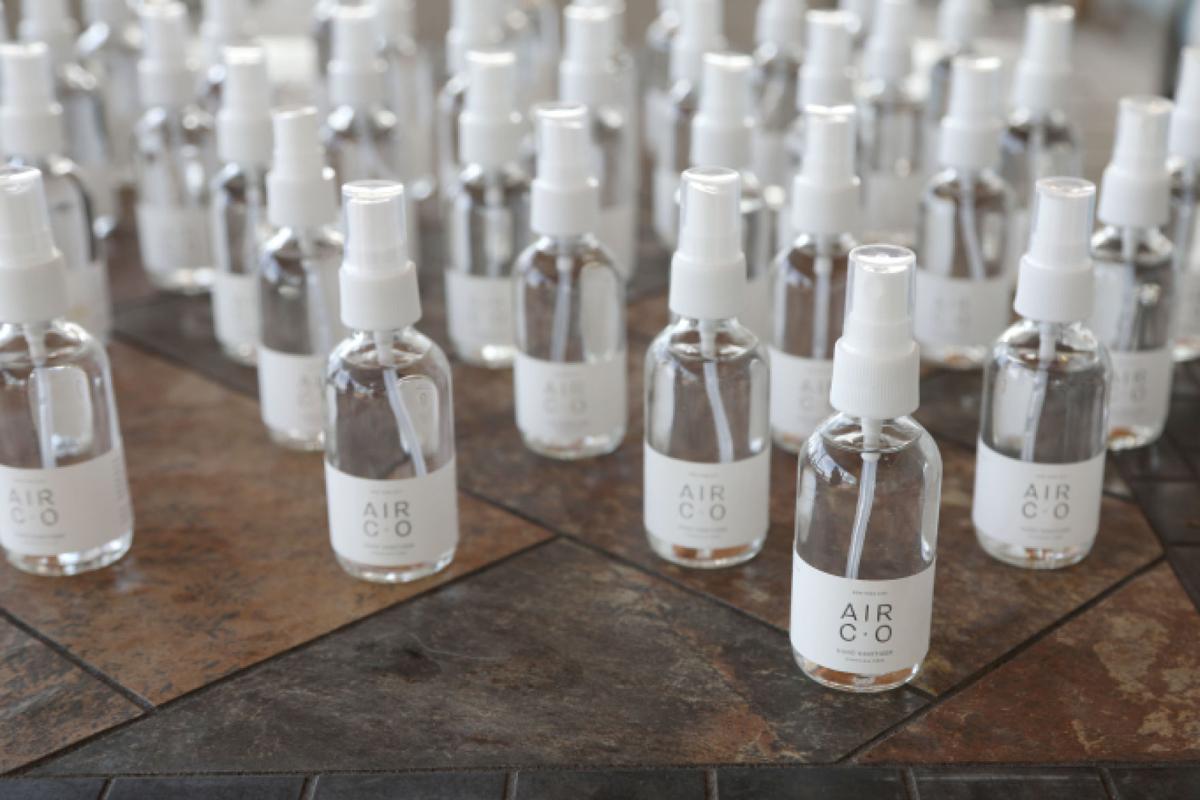 Samples of hand sanitizer created using carbon waste are handed out to attendees at a hearing on carbon capture technology hosted by the U.S. Senate Committee on Environment and Public Works near Gillette in August.

Gov. Mark Gordon made a bold declaration in a March address to the 66th Wyoming Legislature. He called on the state to transition to net-zero carbon emissions within the next three decades.

The remark echoed one made by President Joe Biden just weeks before. Biden’s corresponding executive order outlined steps to start the country on a path to net-zero emissions by 2050.

That said, the two leaders do not necessarily see eye-to-eye on how to achieve the goal.

Wyoming’s governor has maintained that the state can eliminate carbon pollution while still burning fossil fuels, in part by deploying carbon capture technology at coal plants. In turn, Biden has emphasized the need to roll out renewable energy, battery storage technologies and related infrastructure at a massive scale. That said, the president has also expressed support for carbon capture and a limited role for fossil fuels in the country’s next energy chapter.

Regardless, Wyoming will have a sizable role to play in helping set the course of the nation’s energy future.

If Wyoming were a country, it would rank just outside the top 10 energy economies in the world. Put another way, the state has an energy economy roughly equivalent to the size of Norway’s. The energy economy here has a commodity value of roughly $15 billion each year.

Wyoming produces 14 times more energy than it consumes, making it the largest net energy supplier in the country, not to mention the second most energy-intensive state in the U.S., behind Louisiana.

That also means a big portion of the carbon dioxide emitted from energy activity on federal lands comes from Wyoming.

According to a report by the U.S. Geological Survey from 2018, about 24% of the nation’s carbon emissions on average came from fossil fuel production on federal lands (both onshore and offshore).

Wyoming makes up a big portion of that pie: nearly two-thirds of carbon emissions come from the state, based on the study. Twenty-eight percent of methane emissions from energy activity on federal lands was attributable to energy development in Wyoming in the study.

All that to say: When it comes to scaling back emissions from fossil fuel production, Wyoming could be the linchpin to Biden’s plan.

Nonetheless, Biden’s agenda to combat climate change and orchestrate a nationwide transition to clean energy has left many in Wyoming worried. Coal, oil and natural gas production provide more to the Wyoming’s gross domestic product than any other sector. The robust industries have helped the state build one of the best public education systems in the country, not to mention most of its infrastructure. Energy is the economic backbone for almost every community statewide.

Now, the state faces the daunting task of responding and adapting to an energy future in which coal and oil will likely no longer be the crown jewels in energy

Though the state still contributes to about 39% of the nation’s coal supply, coal production here has been roughly cut in half since 2008 as utilities turn to competitive natural gas and renewable energy.

And the state still has a long way to go if it wants to reach net-zero emissions by mid-century.

Carbon capture and hydrogen technology, both lauded as possible solutions by the governor, remain costly.

But the Wyoming Energy Authority and University of Wyoming’s School of Energy Resources have made commercializing these technologies a central priority.

The reality is that alternative revenue streams identified by lawmakers and other state leaders simply can’t compare to what coal or natural gas once provided to the state’s coffers. That means there will very likely not be one single solution that saves the state from its economic woes or climate change.

For several months, I’ve been on the lookout for the patchwork of solutions that communities have already started rolling out to help the state adapt.

That includes a Casper-based technology firm capturing stranded natural gas to mine for bitcoin and limit flaring; a UW alum’s ambitious goal to build a clean energy curriculum and a solar research facility at the state’s university; and Emilee Thomas, a 21-year-old in Green River studying sociology who has ideas for how the state can capitalize on fighting climate change.

As Thomas said: “If we want other options in Wyoming, we are going to have to make them ourselves. But we can’t do that if we’re obsessed with keeping things exactly the way they’ve always been. The world is changing, and we have to change, too.”

Solutions for Wyoming's tomorrow
Wyoming's youth consider the future amid economic uncertainty
Chase Owen Galley: Hold onto energy industries until there is another viable option
Kaitlan Hinton: Slashing education funding is not the answer
Mindy Songer: An innovative farming method could offer a foolproof future

How to decide what kind of business to open

How to decide what kind of business to open

How to curb impulse buys and stick to your budget

How to curb impulse buys and stick to your budget

How Biden's executive orders on climate change could change Wyoming

The order signed today requires the federal government to stop approving new oil and gas leases for public lands and minerals "to the extent possible." The order does not indicate how long the moratorium will last.

The US Senate flipped. What does that mean for Wyoming's energy sectors?

Some fear Democratic control of Congress will spell doom for Wyoming's key industries. Others believe it will force them to make changes the state has put off for too long.

Dave Gribble of TDA Research gives a tour of the first carbon capture research project on the ground at the Integrated Test Center outside Gillette in August. Wyoming's governor has maintained that the state can eliminate carbon pollution while still burning fossil fuels, in part by deploying carbon capture technology at coal plants.

Samples of hand sanitizer created using carbon waste are handed out to attendees at a hearing on carbon capture technology hosted by the U.S. Senate Committee on Environment and Public Works near Gillette in August.