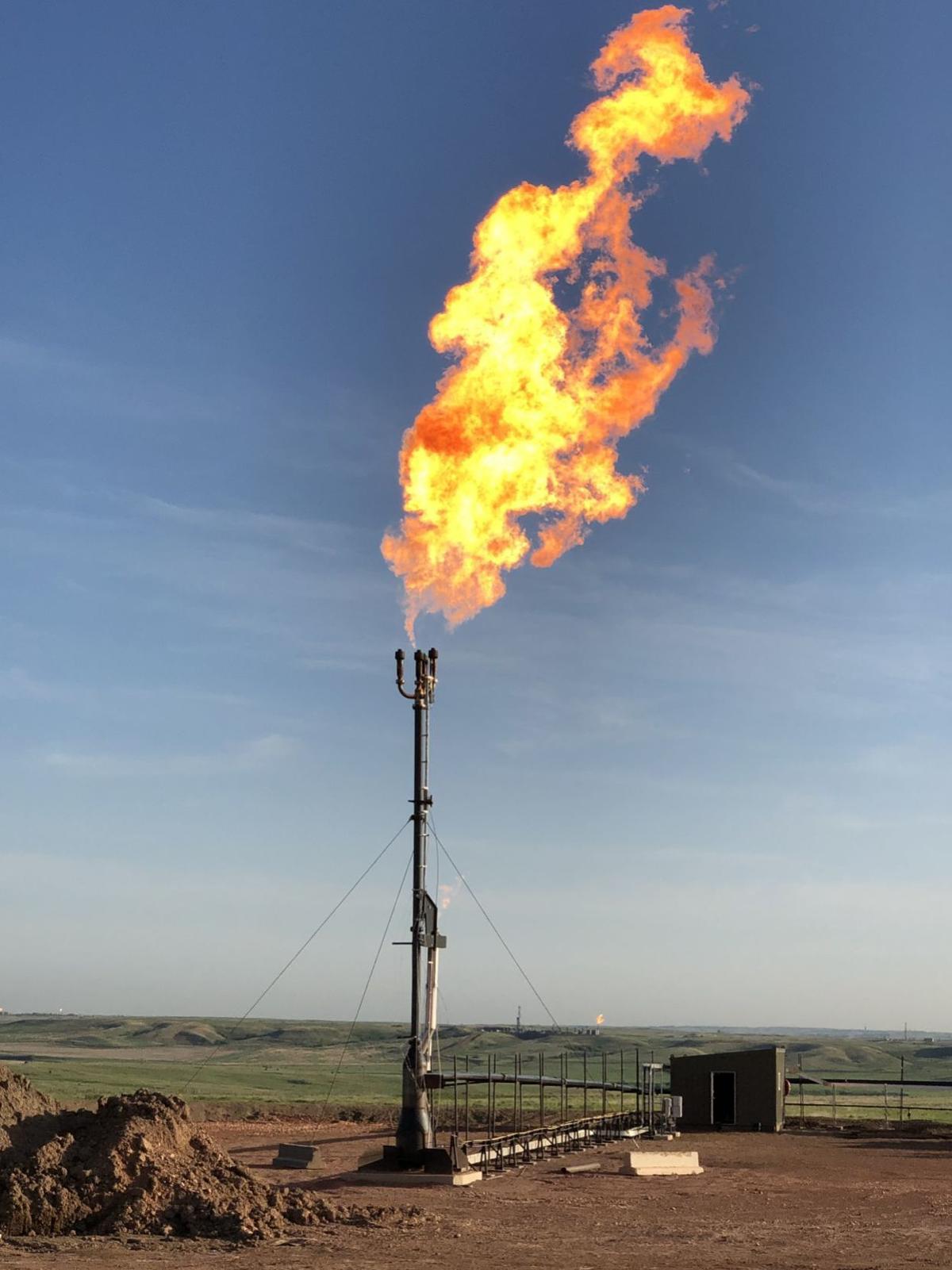 Flaring offers oil producers a way to rid the site of abundant gas. But flaring’s effulgent flames obstruct horizons, contaminate the air and burn up state revenue. A new company called Crusoe came up with a solution. 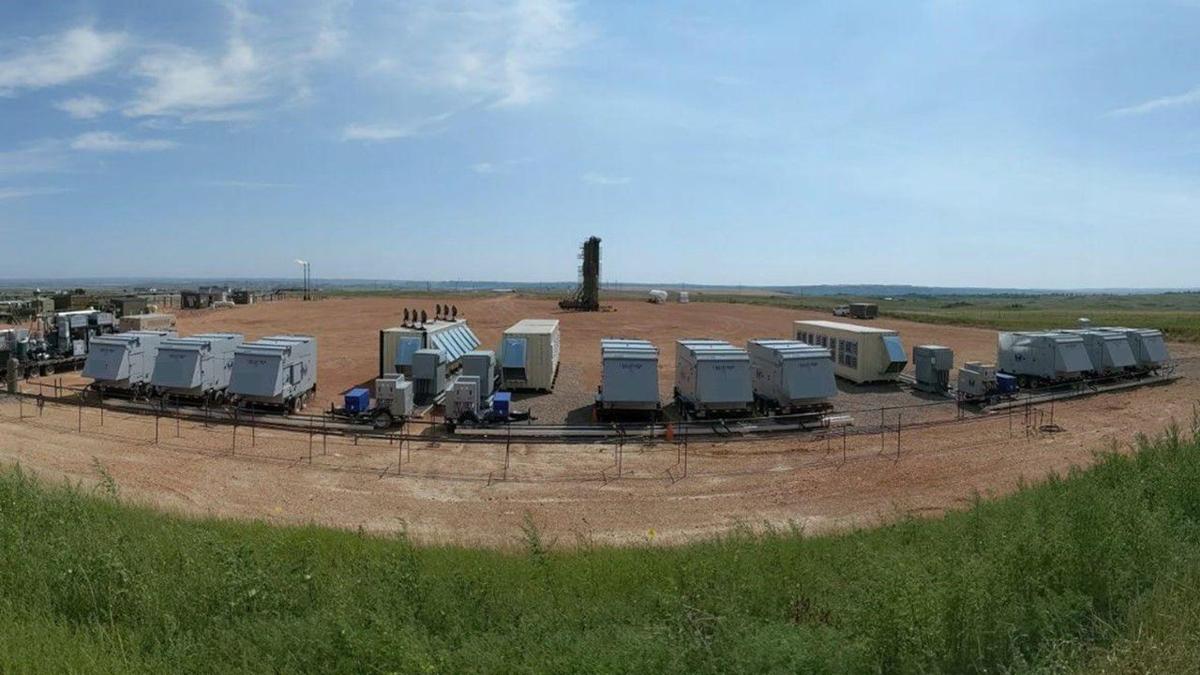 Crusoe uses the excess natural gas, converts it to electricity, and transfers the power to servers on the well site for computing tasks at a small but mighty data processing center. This deployment eliminates approximately 400,000 cubic feet of natural gas flaring per day. 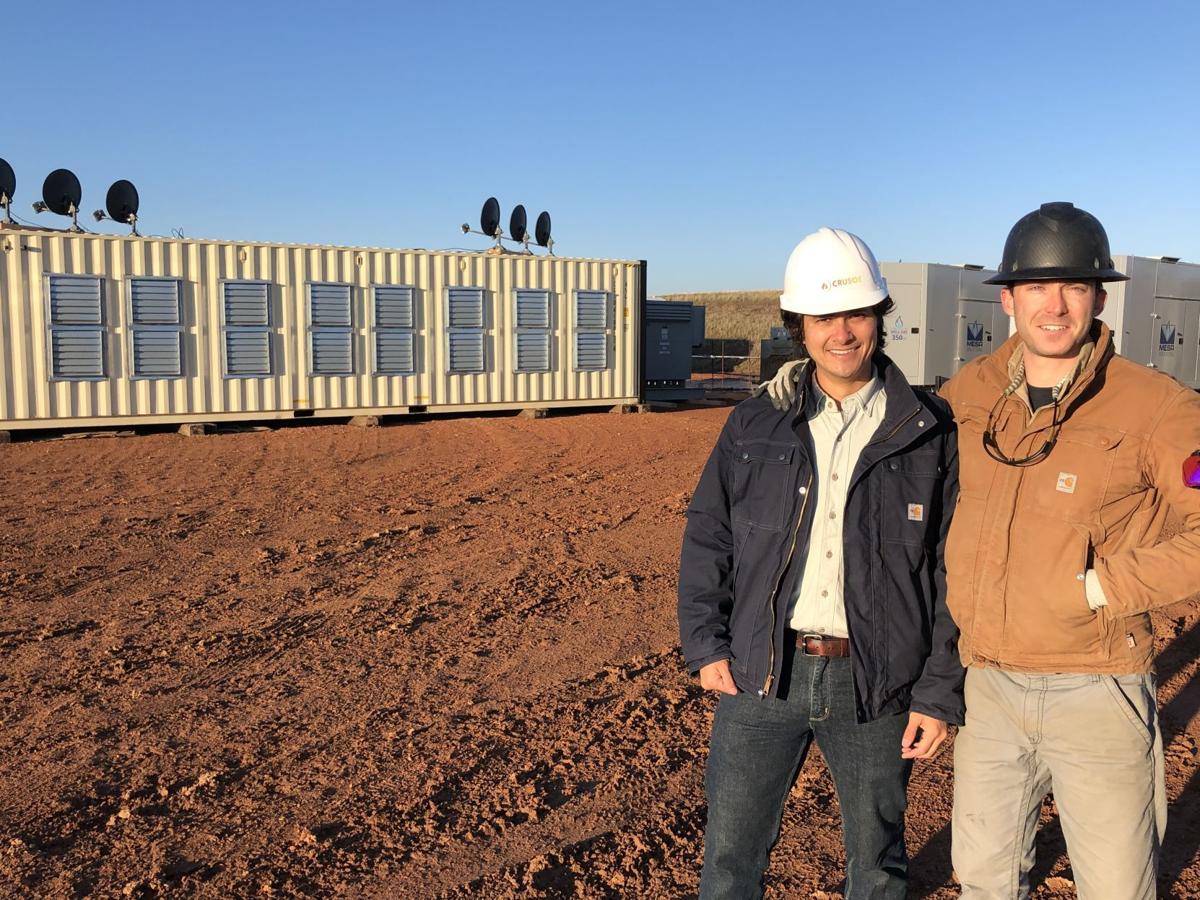 The pair hatched their big idea while climbing to the top of Mount Columbia and Mount Harvard in Colorado.

With open skies and endless trails, Cully Cavness and Chase Lochmiller had no shortage of time to talk. And over the course of the 18-hour day, the oil executive and tech wiz — who first met back in high school — combined their brainpower to launch Crusoe Energy Systems. Crusoe is a company determined to help oil and gas operators avoid flaring, or burning natural gas.

Their solution appears simple, but potent: take excess natural gas, convert it to electricity on a well site and then use that power for data computing.

Shale operators often have their eye on liquids over gas. Oil typically fetches a higher profit for companies than its bedfellow, natural gas.

But when operators drill deep, both oil and gas come up. What to do with that excess natural gas can be a pain for operators, especially when well sites sit in remote areas without pipeline infrastructure.

With natural gas prices dipping below $2 MMBtu, that excess gas is at best a byproduct and at worst a nuisance, Cavness said. Flaring offers oil producers a way to rid the site of abundant gas. But flaring’s effulgent flames obstruct horizons, contaminate the air and burn up state revenue, according to critics.

“We try to focus on areas where flaring is a problem and is constraining their operations,” Cavness noted.

Instead of wasting natural gas, Crusoe and other new companies have started dreaming up beneficial uses for the gas on site.

Crusoe uses the excess natural gas, converts it to electricity, and transfers the power to servers on the well site for computing tasks at a small but mighty data processing center. Using satellite internet, the company digitally transfers the output product.

“Let’s let our oil and gas industry have a piece of this computing economy,” Cavness asserted.

With the advent of fracking, operators have unlocked astronomical volumes of gas along with oil. But the sharp uptick in shale production has outstripped demand, causing gas prices to crater. Building a pipeline or transporting the gas to market by truck might cost a company. So, some turn to flaring.

But flaring also comes with its own set of shortcomings.

For one, many consider flaring to be a waste of a finite resource. Burning off natural gas also threatens surrounding air quality, given its release of contaminants like volatile organic compounds, methane, soot and others. The state also can’t collect production taxes from flared gas, sending millions in potential revenue down the drain each year.

These consequences have led states such as Wyoming to impose limits on flaring. In the Equality State, companies cannot flare more than 60,000 cubic feet of natural gas per day from an oil well. Flaring that amount of gas per day at a well for one year burns enough gas to cover the heating and cooking needs of about 300 homes.

Crusoe’s team has designed projects that can capture upward of 6 million cubic feet of flared gas a day.

If operators have an eye on an exploratory well and anticipate having extra gas on their hands, they must first go before the Wyoming Oil and Gas Conservation Commission and make a case for why flaring beyond the limit is absolutely necessary. In a far worse scenario, an operator must shut in, or stop activity, at a well altogether to avoid excessive flaring, a costly consequence.

Wyoming ranks fourth nationally in the amount of natural gas flared and vented. But the practice remains tightly regulated by the state, even as federal agencies relax emission requirements and open the gates to more oil and gas leasing. Wyoming’s rates also pale in comparison to states like Texas and North Dakota.

“If the state is ever in a situation where this well just cannot be compliant from a gas standpoint and therefore the oil gets shut-in, that is a huge loss of royalties and revenue and taxes for that oil,” Cavness said.

As it turns out, computers consume an exorbitant amount of energy when they perform tasks such as bitcoin mining, artificial intelligence or other machine learning programs, Lochmiller explained.

“We’re bringing some of that high-demand computing into the oil field,” he said.

In doing so, Crusoe removes the need for companies to invest in costly and energy-intensive infrastructure to transfer the gas to market. Instead, the market comes to rural Wyoming oil sites.

At times, operators will look at the data processing center and think its equipment is straight out of the movie “The Matrix,” Cavness said.

“The response initially (from companies) is: ‘is this real? Can this really work?’” he explained.

But the company’s ideas appear to be catching on.

The company agreed not to exceed 1,000 MCF per day (as a monthly average) and end flaring above the daily limit within six months.

But the company will also be siphoning some of that gas to Crusoe’s data processing centers too.

“We left there feeling super validated that we were doing something that the commission liked to see,” Cavness said.

The co-founders took that pivotal hike in June 2018. Fast forward a few dozen months, and the firm has over 21 digital flare mitigation systems planted on oil sites throughout the Rocky Mountain region — their home base. They hope to have 35 operations deployed as soon as June.

“We’ve been really appreciative to the state for giving us that start,” Cavness said.

Crusoe’s two leaders haven’t stopped climbing since launching their new company. The two enjoy endurance sports. The morning Cavness and Lochmiller spoke to the Star-Tribune, the pair had risen at 4:30 a.m. to run through the mountains for two hours.

“Running up and down these various mountains is what we refer to as our board meeting,” Cavness quipped.

A pair of UW professors are leading charge to reduce flaring, or the burning of natural gas, worldwide with a new technology.

Flaring offers oil producers a way to rid the site of abundant gas. But flaring’s effulgent flames obstruct horizons, contaminate the air and burn up state revenue. A new company called Crusoe came up with a solution.

Crusoe uses the excess natural gas, converts it to electricity, and transfers the power to servers on the well site for computing tasks at a small but mighty data processing center. This deployment eliminates approximately 400,000 cubic feet of natural gas flaring per day.