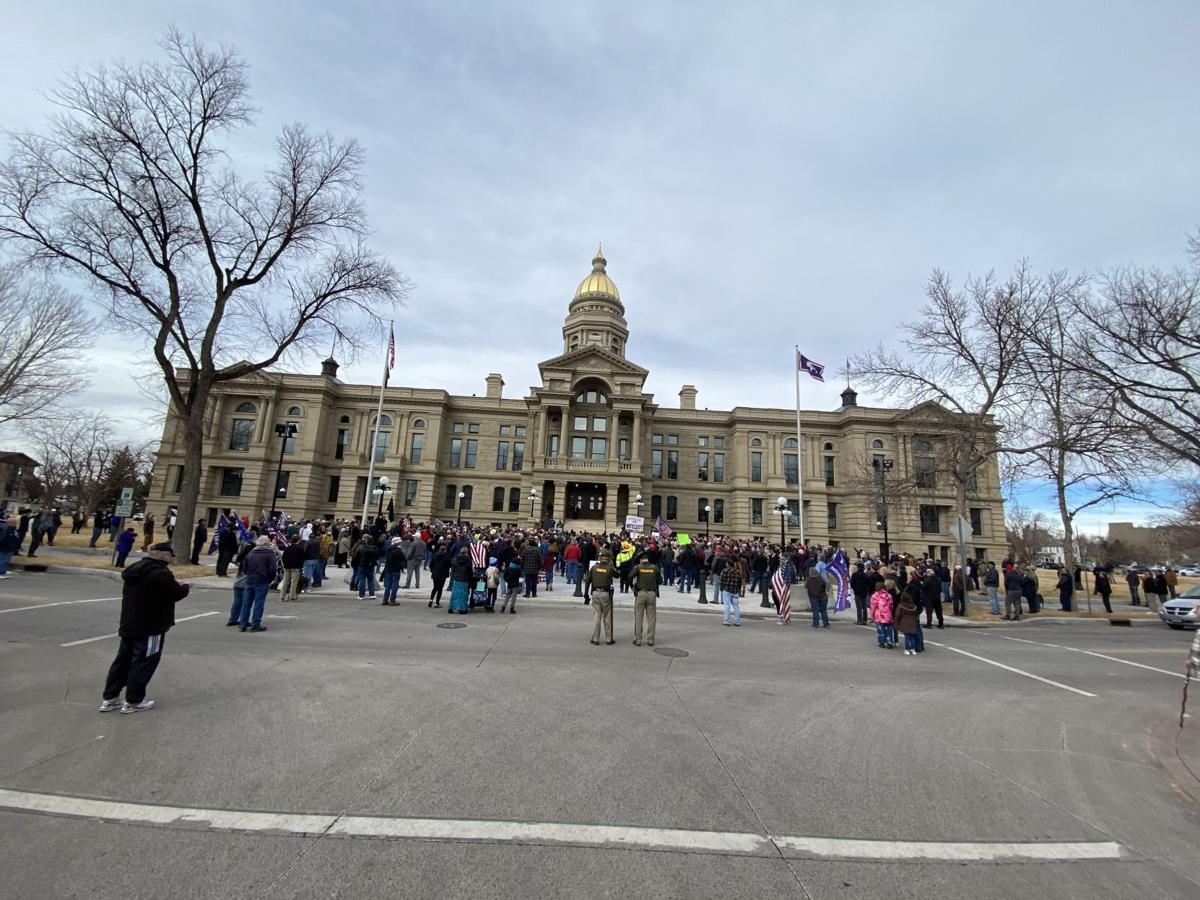 A crowd of a few hundred attend a rally at the Wyoming Capitol on Jan. 28 in opposition to Rep. Liz Cheney. The Legislature meets for an in-person session at the Capitol starting Monday.

As the state attempts to crawl out of a budget shortfall and identify new revenue streams, several consequential bills related to the state’s energy industry have been introduced.

The Star-Tribune identified five important pieces of legislation related to energy to keep an eye on in March.

Senate File 16 asks the Public Service Commission — the regulatory body in charge of keeping energy rates affordable and power reliable for customers — to establish a new net metering system that is fair to all ratepayers.

The state’s current net metering system was adopted about two decades ago and applies to small-scale energy generators, such as residents who install wind turbines in their backyards, or solar panels on their roofs to power their home.

For many, the investment is a practical one. Over time, homeowners can save money on their energy costs. Excess power can be sold to utilities and the independent electricity generators receive a credit.

Why overhaul the current system?

Proponents of Senate File 16 argue net metering customers receive a “subsidy” under the present system. By not paying the same level of fixed fees as other utility customers, net metering customers shift costs onto the rest of a utility’s ratepayers. Some fear that utilities’ fixed costs will only continue to climb, and the majority of ratepayers will be stuck with higher rates.

What will happen if you already have solar panels on your house or business?

The bill grandfathers in net metering customers who install wind or solar systems before July 1, 2022.

Why does this matter?

If signed into law, Senate File 16 could generate uncertainty for the future of residential renewable energy in Wyoming, critics say.

For instance, the bill could disincentivize residents from investing in solar and wind power because they won’t receive as much of a return on the excess power they generate and it may take longer for them to recoup the money they invested in installing solar at home.

It could also hurt small businesses installing renewable energy on homes, or deter energy companies from investing in Wyoming.

What’s next for the bill?

The bill aimed at overhauling the state’s net metering system received approval from the Senate during its third reading at the end of January. But it was not taken up by the House committee during the virtual session. It will likely be introduced during the session in March.

House Bill 94 proposes to exact an additional tax on utility-scale solar power facilities. It would levy a $1 tax on each megawatt hour of electricity produced from larger solar energy facilities in the Equality State. If passed into law, the tax would mirror one already exacted on wind energy facilities.

Rep. Albert Sommers, R-Pinedale, sponsored the proposed legislation. According to Sommers, it would “create parity” with the renewable resource realm.

Will the tax apply to homeowners or small businesses with rooftop solar?

No. The tax would not apply to small-scale energy producers, like homeowners with solar panels on their roofs.

How much revenue would the tax generate?

Imposing a generation tax on solar facilities could generate an estimated $190,000 in annual revenue in fiscal years 2023 and 2024, according to a fiscal note.

At the moment, only one utility-scale solar facility exists in the state. The Sweetwater Solar Energy Project in Green River carries a generating capacity of up to 80 megawatts. However, many utilities, including the state’s largest, have started to invest in renewable energy infrastructure to save ratepayers money.

What do opponents of the bill say?

Critics of the bill say it’s the wrong approach and would only deter additional solar energy development in the state.

House Bill 11 would slash in half the severance tax, or state mineral tax, paid by oil and gas operators for six months. The relief would need to be utilized within one year of the price of oil hitting $45 a barrel.

Why do the bill’s supporters think oil and gas operators need a tax break?

Oil and gas activities have tanked during the pandemic. Several major oil and gas companies have trimmed their workforces, reeled in expenses and halted production. The rig count in Wyoming — a prime indicator of how much drilling activity is occurring — fell from 30 rigs in March to zero rigs in June. It’s now back up to five, as of Friday.

What would the economic effect on the state be?

According to the fiscal note, the bill could result in a loss of $13.5 million in revenue for the state next year.

But proponents of the legislation argue the exemption would catalyze more oil and gas activity and would help an industry central to Wyoming’s economy recover.

What does the bill do?

Why eliminate the grace period for new wind operators?

Proponents of repealing the tax hiatus have argued the move could drum up a much-needed alternate revenue stream for the state during a ballooning fiscal crisis brought on by the coronavirus pandemic and a downturn in the fossil fuel industry.

What do critics of the bill say?

The renewed possibility of changes to wind energy regulations has sparked concern among the state’s utility companies, independent power producers and other renewable energy supporters.

Many say the exemption repeal would hike costs for consumers, create regulatory barriers and severely deter renewable energy investment in the state. Any increased tax burden on developers makes projects less competitive in the region’s cutthroat energy market, they said, and deter future investment in the state, opponents say.

Why was there a tax hiatus in the first place?

When the Wyoming Legislature instituted the tax about a decade ago, it built in the grace period for budding renewable energy projects by waiving the generation tax for the first few years of a developer’s operations.

Wyoming already levies sales and use taxes and property taxes on wind generators.

Are there other bills that could affect wind energy?

Yes. Another bill, House Bill 108, would institute an additional $1 per megawatt hour tax on electricity generated from wind farms.

What does the bill do?

House Bill 155 was introduced on Friday. It would require the Public Service Commission — the state agency regulating certain utilities in Wyoming — to consider the effects of a coal or natural gas power plant closure on grid reliability before approving its retirement.

“Before authorizing or approving the closure of an electric generation facility as proposed in a rate case, integrated resource plan or other submission to the commission, the commission shall consider the effect on available reliable, dispatchable electricity to Wyoming customers and on a nationwide basis,” the bill states.

Under the bill, utilities will also be held liable for damages if there is a power outage in certain circumstances.

What’s the purpose of the bill?

How can I learn more?

— The federal government reached a major agreement with a coal firm and attorneys to partially settle $61.5 million in unpaid royalties and interest tied to two Wyoming coal mines. The Interior Department, a federal agency managing public lands, will give the current coal operator Eagle Specialty Materials 10 years to pay off a portion of the debts left behind by previous owners of the Eagle Butte and Belle Ayr mines.

— A federal court approved a tentative agreement struck between attorneys for bankrupt firm Lighthouse Resources and a coal union. The new deal will mean about two dozen union workers could be rehired to complete reclamation, or cleanup, at the company’s Decker coal mine near the Montana border. The Decker mine stopped producing coal and laid off a vast majority of its workers after the owner filed for bankruptcy. Most of the workers live in Wyoming.

— Gov. Mark Gordon led the Republican Governors Association in sending a letter to President Joe Biden on Monday, urging him to withdraw his executive order pausing new federal leases for oil and gas development — a move many state leaders say will devastate Wyoming’s economy. The letter, which was co-signed by Republican governors in 16 other states, called the Jan. 27 decision and lack of consultation with affected states by the Biden administration “alarming.”

— After significant debate, Carbon County Commissioners approved a conditional use permit for a segment of the Gateway West transmission line. Proposed by the utility Rocky Mountain Power, the high-voltage power line would help transport electricity to more customers (via Rawlins Times).

“This Earth provides us with every single thing we need, and it has for millennia. I feel strongly that if we take a lot of care to make sure that we are doing everything we can, we can have those jobs well in the future and our grandchildren should be able to rely on what they get from the Earth as much as we do.”

Lawmakers sent a bill to next year's legislative session that would eliminate a three-year electricity tax moratorium available to new wind energy projects.

“I can’t in good conscience vote to approve his nominee for secretary of energy,” Barrasso said.

Sen. Barrasso outlined a string of concerns he had with the nominee's appointment, including Rep. Haaland's previous statements against fracking and pipeline development.

Lighthouse Resources Inc. paid 11 executives a total of $3.3 million, including at least $702,000 in bonuses, in the year before filing for bankruptcy.

Wyoming Legislature wastes no time, as it convenes for in-person session

Wyoming lawmakers sprint to save coal

The Legislature unveiled more than a half dozen bills this year to help Wyoming's coal sector stay afloat. Here's a rundown of four of them.

House Bill 166 would prohibit the early retirement of coal or natural gas power plant units unless a utility company takes additional steps to prove ceasing operations would not hurt customers or reliability.

A crowd of a few hundred attend a rally at the Wyoming Capitol on Jan. 28 in opposition to Rep. Liz Cheney. The Legislature meets for an in-person session at the Capitol starting Monday.