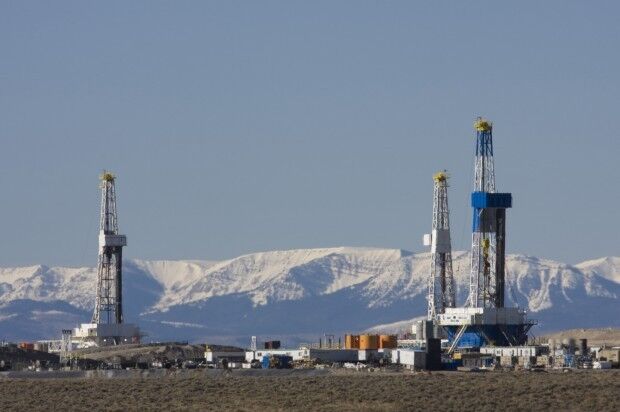 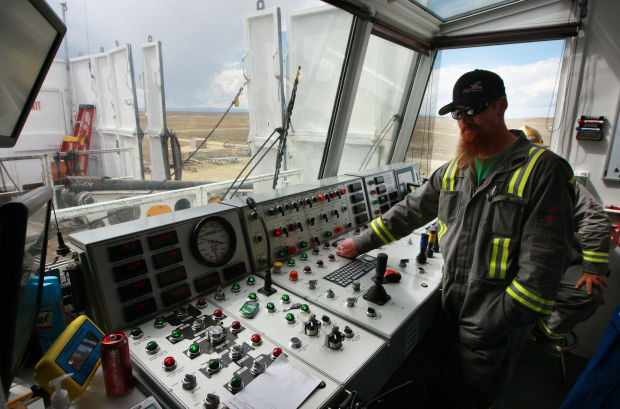 Driller Scott MacPhearson runs the control room of the Ensign 157 rig on Monday, Sept. 8, 2014 in the Jonah Field near Pinedale.

PINEDALE — One less operator and over a dozen fewer jobs exist on the Pinedale Anticline now than this time last month.

UP Energy LLC — better known as Ultra before the company converted to a private company as a result of its second Chapter 11 bankruptcy in September 2016 — purchased Pinedale Energy Partners, an official confirmed to the Roundup.

UP Energy representative Kelly Bott told the Roundup her company had acquired PEP’s assets as of April 30.

“With this consolidation of assets, we are able to further streamline operations with a focus on safety and environmental diligence,” Bott said. “UP Energy is excited for the opportunity to bring our laser focus on sustainability and asset optimization to this expanded leasehold, and we look forward to a continued partnership with the local community.”

“We plan to continue our effort to produce and certify responsibly sourced gas in the Pinedale Anticline and Jonah fields, and are committed to be best-in-class with a focus on delivering on our promises to all our stakeholders.”

Financial terms of the deal were not released and neither UP Energy nor PEP issued a press release on the deal.

The deal sent shockwaves throughout Pinedale and greater Sublette County, the full extent of which are largely unknown.

The amount of workers affected, and how many jobs were lost as a result of the acquisition, were not confirmed to the Roundup.

Sublette County Board of Commissioners Chairman Joel Bousman said it was his understanding about half of PEP’s workforce — roughly 20 employees — lost their jobs as a result of the purchase. Those hoping to stay in the energy sector will find little opportunity in the county. Even those hoping to pivot into adjacent sectors like construction don’t have a plethora of options if their aim is to stay in Sublette, Bousman said.

That likely means those seeking employment again have to leave Pinedale, some with their families. That could immediately decrease enrollment in schools, which could receive diminished funding as a result of a smaller population. It also harms the community itself with a loss of neighbors.

“You feel for them,” Bousman said. “When they’re here they’re part of the community. Their kids go to our schools, our kids are friends with their kids. It can be a destructive thing.”

Bousman and county Treasurer Emily Paravicini said the economic impact of one fewer producer in a community 90% dependent on oil and natural gas shouldn’t be overbearing. The county’s tax revenue depends on production, not producers, they agreed. And as long as this doesn’t take active rigs out of the ground, the sale shouldn’t alter revenue.

“I don’t think that there will be any issues for the county with the Ultra purchase of PEP,” Paravicini said. “Ultra has a good history with Sublette County, and having a purchaser that has deep roots here means that perhaps they’ll stay and keep Sublette County residents working. It’s been a tough go for oil and gas producers for the last year or so, fingers crossed that things at the very least do not get worse.”

Continued Ad Valorem tax payments are “paramount” to the county being able to fund social services and infrastructure like schools, health care facilities and libraries, she said. Bousman said the board of commissioners was given ample notice on the possibility of a sale.

“We haven’t been left out to dry by PEP or Ultra,” he said.

The board’s chairman also cited Ultra’s history of prompt tax payments and a “good working relationship” as reasons not to worry. Ultra stayed on schedule with its tax payments when the company went through its most recent bankruptcy in 2016, he said.

The six proposed wind farms could add more than 1,600 megawatts of electricity generation capacity to Wyoming’s grid by 2024

The Biden administration’s suspension of new oil and gas leases on federal land and water was blocked Tuesday by a federal judge in Louisiana, who ordered that plans be resumed for lease sales that were delayed for the Gulf of Mexico and Alaska.

The Wyoming Oil and Gas Conservation Commission received about 60 applications for the Energy Rebound Program within roughly a day of the application period opening.

LARAMIE — After five hours of sometimes heated testimony regarding the proposed Rail Tie Wind Project, the Albany County Board of Commissioner…

Driller Scott MacPhearson runs the control room of the Ensign 157 rig on Monday, Sept. 8, 2014 in the Jonah Field near Pinedale.