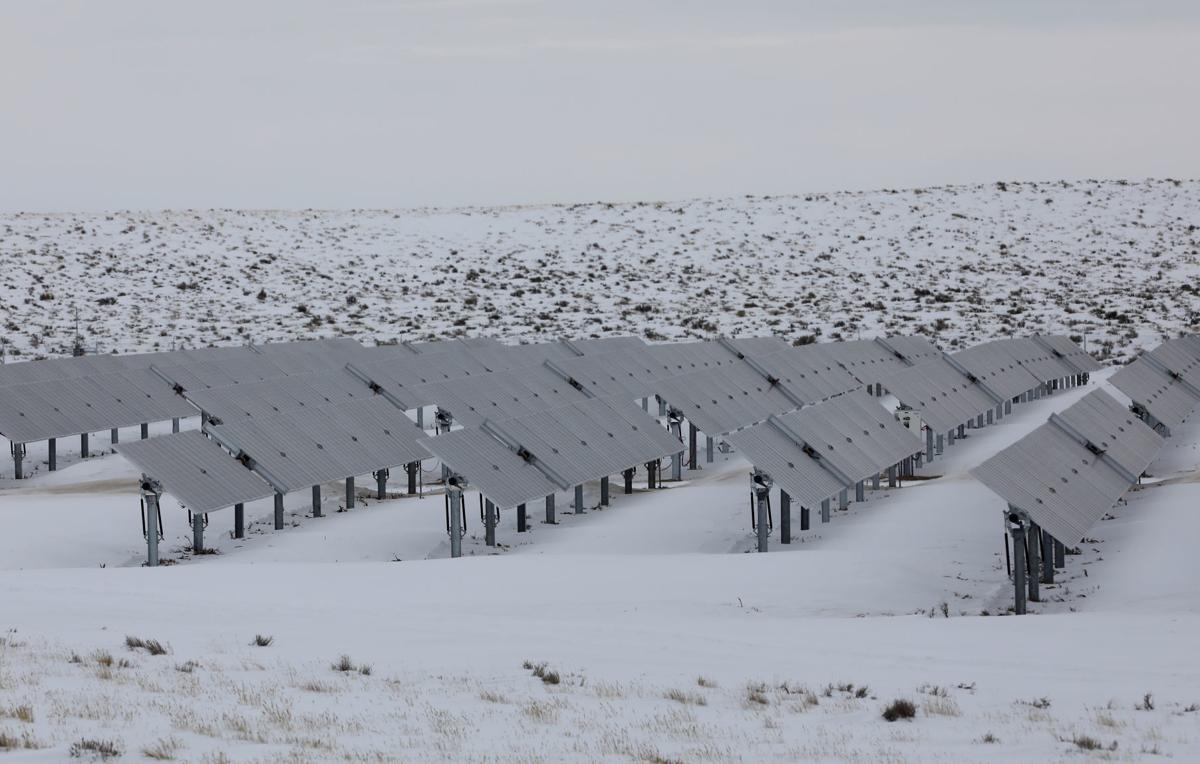 The Sweetwater Solar energy project, which covers about 700 acres northwest of Green River, is pictured in 2019. Recent innovations have increased the efficiency of solar cells. 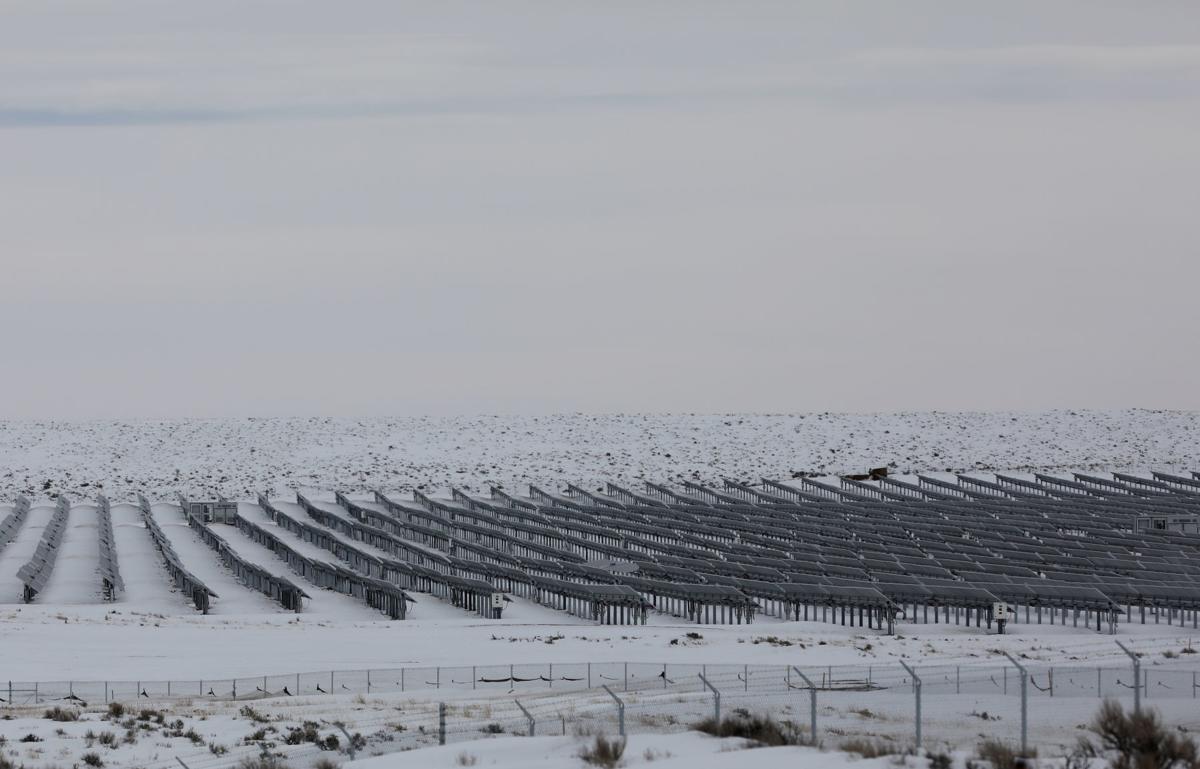 The Sweetwater Solar is the first utility-scale solar energy farm in Wyoming. Solar panels made with a material called perovskite could enter the commercial market in the near future, some scientists predict. 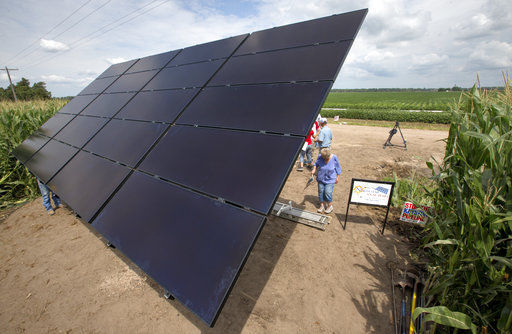 Solar energy scientists have been on the hunt for the most effective solar cell — one built from materials that can convert sunlight into electricity as efficiently and economically as possible. But finding those ideal materials can be tough. When it comes to utility-scale solar, companies overwhelmingly install solar cells made from silicon. Yet silicon’s dominance in the commercial market of solar doesn’t mean other options don’t exist.

Solar cell materials need to be abundant, relatively easy to manufacture and effective at absorbing sunlight efficiently at an ideal wavelength for producing electricity.

“The really great thing about perovskite cells is that they tick all those boxes,” said David Ginger, chief scientist at University of Washington’s Clean Energy Institute.

Scientists have been able to build perovskite solar cells with record efficiencies of roughly 25.2 percent in recent years. In other words, about a quarter of all the energy packed into the sunlight that hits the solar cell is converted into electricity.

To Ginger, these recent leaps in perovskite development are a big deal.

“In just a few years, the material’s efficiency is now close to — though not quite as good — but close to, where silicon solar cells are,” Ginger said.

Scientists, armed with lessons learned from experimenting with silicon, were able to advance the efficiency of perovskite cells in record time.

But problems still persist. Perovskite contains lead, which is toxic to humans.

For one, the level of lead is relatively low, not any more than what’s found in car batteries, Ginger said. When applied to a solar cell, the active layer of perovskite is extremely thin, significantly thinner than the diameter of a single human hair. That means its environmental impact is likely less than the heavy metals emitted from the combustion of coal.

Still, researchers have been on the hunt for safer, lead-free formulations of perovskite, and new ways to seal the perovskites from the environment.

“I’m optimistic that in the next few years that we can get there,” Ginger said.

To reach higher efficiencies, researchers have been experimenting with tandem solar cells to make perovskites more efficient and capable of generating more power from the sunlight it absorbs.

Ginger compared a tandem solar cell to a tandem bicycle, or a bicycle built for two people. A tandem solar cell is composed of a pair solar cells stacked one on top — like perovskite and traditional silicon. Combining the forces of these two components can lead to a more efficient solar panel with fewer defects.

Though perovskites haven’t been applied yet on a large-utility scale, several companies around the world are racing to commercialize the new technology.

But perovskites are more resilient to defects than other photovoltaic technologies, potentially making them cheaper to manufacture.

Could Wyoming create oil and gas jobs by accelerating the cleanup of orphan wells?

Wyoming lawmakers proposed funneling an additional $7.5 million to the Oil and Gas Conservation Commission to spur the cleanup of orphan wells and create oil and gas jobs during the economic downturn.

Before retiring a coal-fired power plant in Wyoming, an owner must attempt to sell it to a new owner and keep it burning. But there are rules.

Despite the Bureau of Land Management's decision to postpone oil and gas lease sales in four neighboring states, Wyoming's is still scheduled for June 22.

Funds collected through mineral taxes form the bulk of the state's revenue. Missed funds can lead to budget shortfalls and cuts to schools, infrastructure and other basic public services.

The BLM has granted royalty rate reductions on 40 different leases across Wyoming, according to the Star-Tribune's review of documents on the BLM's database.

Nearly 100 coal miners — many from Wyoming — have returned to work after being furloughed.

The Sweetwater Solar energy project, which covers about 700 acres northwest of Green River, is pictured in 2019. Recent innovations have increased the efficiency of solar cells.

The Sweetwater Solar is the first utility-scale solar energy farm in Wyoming. Solar panels made with a material called perovskite could enter the commercial market in the near future, some scientists predict.