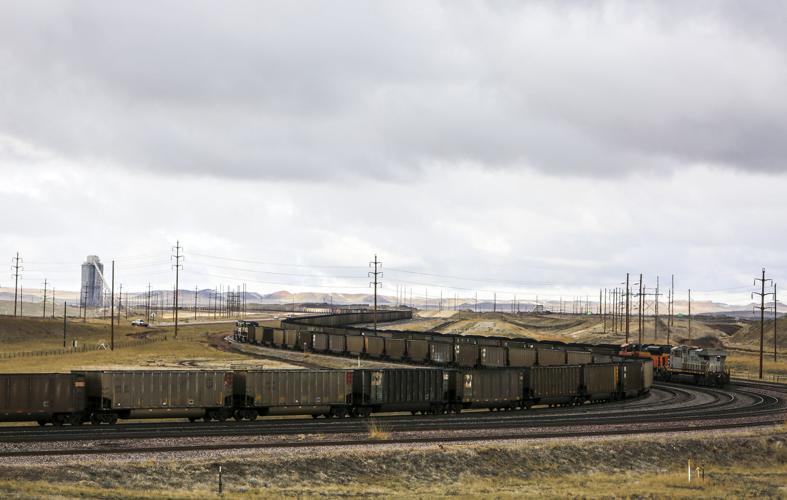 A train approaches the Black Thunder coal mine on March 29 near Wright. A Congressional watchdog group has called for the end of self-bonding in Wyoming. 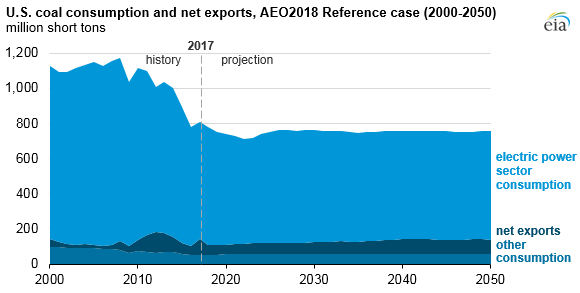 The Energy Information Administration recently released a number of potential scenarios for the future of coal demand. In a reference case, where existing energy trends remain in place, coal demand would experience a decrease until 2022, then remain flat until 2050. Wyoming coal country is facing a number of market pressures, but declining demand is a considerable worry as utilities elect other fuels.

Wyoming’s coal mines may experience steady demand for the next 30 years, despite the planned retirement of many power plants that burn Powder River Basin coal, according to an article from the Energy Information Administration Friday.

The possibility that thermal coal demand will face a short-term decline until about 2022 before stabilizing until 2050 is not a new one from the EIA, an independent federal agency that collects and analyzes national energy data. Flat coal demand is one of a number of potential outcomes for the coal industry that the agency laid out in its Annual Energy Outlook published in early February. The article last week focused on one possible future for coal — stable demand.

It’s certainly the outlook that many in Wyoming coal country want to hear. The state’s coal industry supplies about 40 percent of national demand, with customers in coal-burning plants located across the west and Midwest.

A number of utilities that burn Wyoming coal have announced their intention to phase out coal in favor of natural gas or renewable power.

That trend has shaken the coal industry in recent years, though many companies say they are accounting for the reduced demand and can still compete in a leaner market. But the trend away from coal has a number of experts doubting that coal demand will indeed remain flat for decades to come.

The EIA’s report makes a point to caution reading too much into any one scenario. The projection that coal demand will remain flat is an all-things-being-equal outlook, as in a scenario where there is no Clean Power Plan pressuring utilities to reduce carbon dioxide emissions, no sudden spike or dive in the price of natural gas to out compete coal and no unforeseen spate of early retirement in the coal fleet.

In the scenario where coal demand remains flat, current energy trends play out as expected and no wrenches are thrown into the gears.

Most look at these potential paths for coal with caution.

“You take these reports for what they are,” he said when the Energy Information Administration released its annual outlook. “A snapshot of where we are, what the markets look like and some predictions on the markets.”

Wyoming’s coal industry has stabilized after a two-year downturn, but it has contracted. Production is lower, jobs are fewer and outlooks are more tenuous.

The Wyoming State Mine Inspector reported recently that only five full-time coal jobs were added in 2017. Two years after a series of layoffs from the largest mines, it appears that the job numbers are settled, with companies depending more on overtime and contract workers than they did previously, experts say.

Production last year rose about 6 percent from the previous year, landing at more than 300 million tons. Those numbers are not expected to rise to former heights, industry and industry-watchers agree.

“I’m not sure we’re ever going to see the days of 400 to 450 million tons,” Deti said when the federal production figures were released. “We just have to get used to where we are.”

Political support for the coal industry has centered around de-regulation and support for carbon capture to reduce carbon dioxide emissions. Scott Pruitt, administrator of the Environmental Protection agency, recently made a visit to Wyoming coal country following a public meeting about repealing the Clean Power Plan.

U.S. Sen. John Barrasso recently sponsored two bills to help the carbon capture industry and criticized the Trump Administration’s suggestions to cut the majority of its Department of Energy spending on carbon capture research and development.

All of Wyoming’s delegates to Washington speak highly of coal and unfavorably of regulations that would pressure the industry. The majority of coal’s woes, most experts agree, are market pressures.

One week in Wyoming coal, five jobs, self bonding and the Environmental Protection Agency

Have an event, trend or general energy happening you’d like to see in the Energy Journal newsletter? Send it to Star-Tribune energy reporter H…

Like a powerful car with its pedal pressed to the floor, the national economy is burning hot, but that engine could overheat at risk to Wyomin…

Wyoming’s coal economy has stabilized since a devastating two-year downturn that swept nearly 1,000 miners out of work, but any lingering hope…

Miners, politicians and local business owners spoke of coal like they would an old friend, a Wyoming character both dependable and indispensable.

Save time and money during the holidays with these apps

Save time and money during the holidays with these apps

A train approaches the Black Thunder coal mine on March 29 near Wright. A Congressional watchdog group has called for the end of self-bonding in Wyoming.

The Energy Information Administration recently released a number of potential scenarios for the future of coal demand. In a reference case, where existing energy trends remain in place, coal demand would experience a decrease until 2022, then remain flat until 2050. Wyoming coal country is facing a number of market pressures, but declining demand is a considerable worry as utilities elect other fuels.