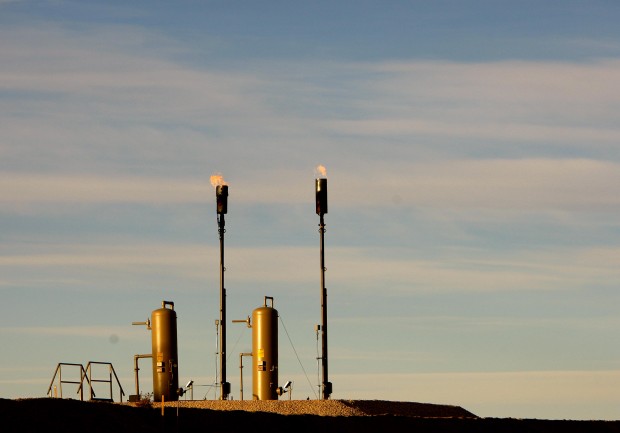 Flares burn off excess natural gas at a site run by Chesapeake Energy on Nov. 20 east of Douglas. Chesapeake and three other oil and gas companies with operations in Wyoming received notices of air quality violations from the Wyoming Department of Environmental Quality last week. 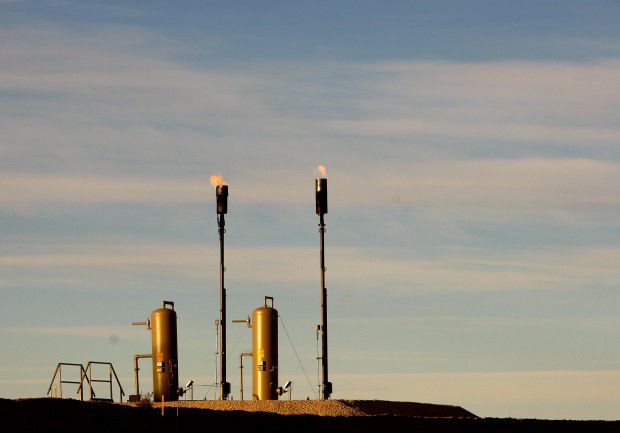 Flares burn off excess natural gas at a site run by Chesapeake Energy in November 2012 east of Douglas.

Wyoming's environmental regulator has hit a handful of oil and gas operators with citations for air pollution, including one company previously singled out by some for its gas flaring practices.

In one case, a gas production plant emitted hundreds of tons of pollutants into the air for nearly a year before its operator reported itself to the DEQ and applied for a state air quality permit.

Each citation doesn't yet include a fine, but penalties could eventually be levied.

Inspectors visiting Chesapeake operations in December found that emissions from at least three company wells in the county weren't under control at all times from June through November, a violation of state rules, according to the Feb. 25 citation.

The inspector also noted that company records "did not present a true picture of the emissions during that time."

The company didn't answer questions Thursday about how the violations occurred.

"We are reviewing the data and are being responsive to DEQ," company spokeswoman Kelsey Campbell said in an email.

Douglas-area residents have complained about Chesapeake operations before. In late 2012, some residents questioned the company's natural gas flaring practices and the complaints eventually triggered a DEQ inspection.

An inspector in August reported it was "doubtful" that at least two Chesapeake flare stacks in the area would meet state standards, although those flares -- stacks which burn off gas which can't otherwise be captured and sold -- weren't yet due for an air quality permit to enforce the rules.

The agency also sent three other companies notices of violation for a variety of infractions.

Oklahoma-based Huntington Energy received a violation notice after the company failed to obtain an air quality permit prior to constructing a production facility in Washakie County in November 2011.

Huntington finally applied for the permit in October 2012 -- nearly a year after being built and after nearly a year of producing and flaring gas. Officials also determined emissions from oil storage tanks weren't under control during that period.

The DEQ estimates the facility emitted 310 tons of volatile organic compounds, 284 tons of sulfur dioxide, six tons of hazardous air pollutants and four tons of hydrogen sulfide into the atmosphere.

A call to Huntington's headquarters in Oklahoma City wasn't returned.

BP American Production, based in Houston, received a citation after a inspection uncovered gas being vented rather than routed through an emissions control device.

While visiting a Sweetwater County BP well in December, the inspector noticed that gas was venting from a valve. Under permit conditions, the gas should have been routed through an emissions control device.

BP spokeswoman Paula Barnett said in an email that the company contacted the DEQ Wednesday to begin settlement procedures.

Thunder Creek Gas Services received a DEQ citation after an agency review showed that the Denver company failed to conduct annual testing of a compressor station in Johnson County.

When the company finally tested the unit -- 11 weeks late -- data showed that the engine was emitting improper levels of volatile organic compounds. The company then failed to report the test results, fix the problem or re-test the unit within 24 hours, a state requirement.

The company also failed to test two compressor engines within the required time after start up. Thunder Creek, based in Denver, did not return a call seeking comment.

Each agency notice does not guarantee further penalty. Agency spokesman Keith Guille said the documents are simply used to establish contact with a company and start the process of correcting the violations.

"The most important part is getting them into compliance," he said.

Companies are asked to respond to the DEQ within 10 days of the notice to set up a meeting. Pending settlement discussions with the agency, each could eventually carry maximum fines of $10,000 per day.

Reach energy reporter Adam Voge at 307-266-0561, or at adam.voge@trib.com. Read his blog at http://trib.com/news/opinion/blogs/boom or follow him on Twitter @vogeCST.

This article has been updated to note that Huntington Energy reported itself to state regulators for its failure to have an air quality permit for a gas production plant. The original piece said state regulators discovered the plant's status from a December inspection.

The Wyoming Department of Environmental Quality recently cited six companies for air pollution concerns, including one firm that requested a p…

DOUGLAS — There’s a lot more going on outside of Douglas than there used to be.

Flares burn off excess natural gas at a site run by Chesapeake Energy on Nov. 20 east of Douglas. Chesapeake and three other oil and gas companies with operations in Wyoming received notices of air quality violations from the Wyoming Department of Environmental Quality last week.

Flares burn off excess natural gas at a site run by Chesapeake Energy in November 2012 east of Douglas.