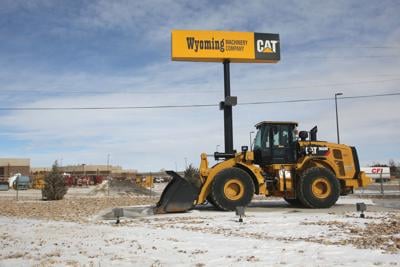 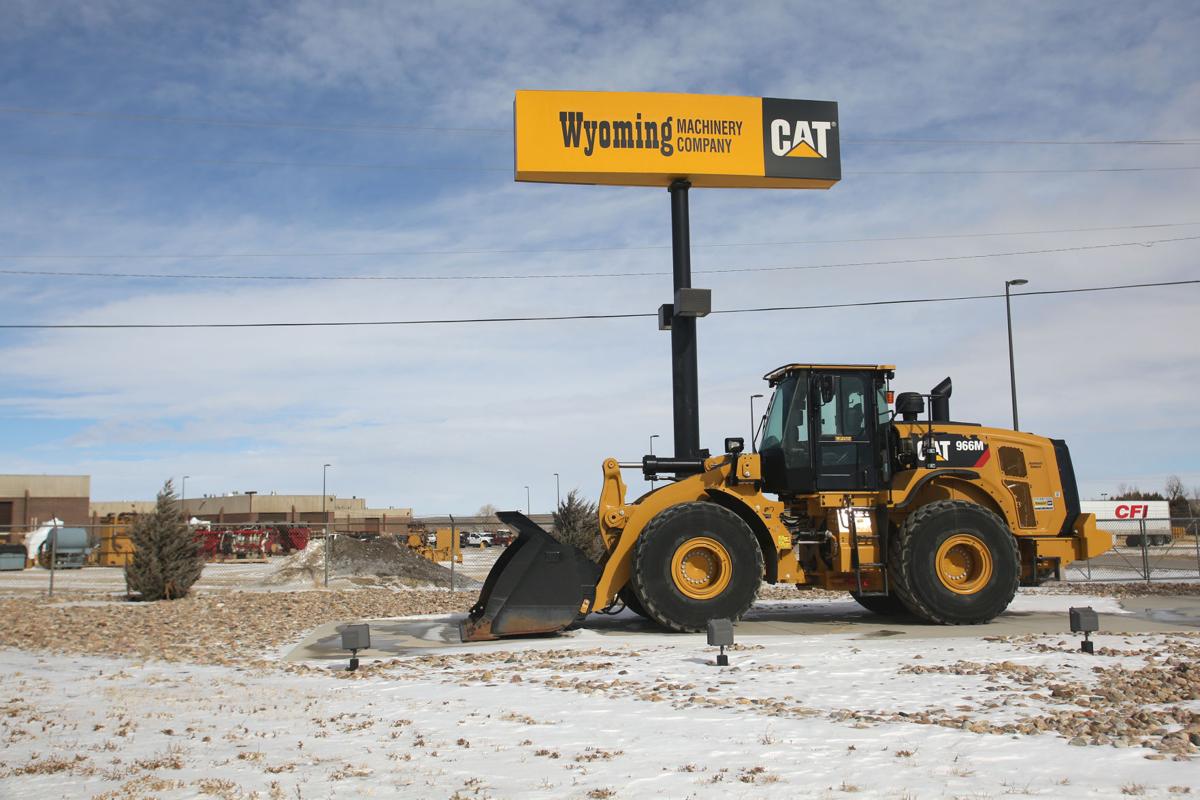 Heavy machinery sits at the entrance of Wyoming Machinery Company in Mills on Friday. The company's training and development manager said the firm has started distributing educational material about the vaccine to workers on a regular basis. 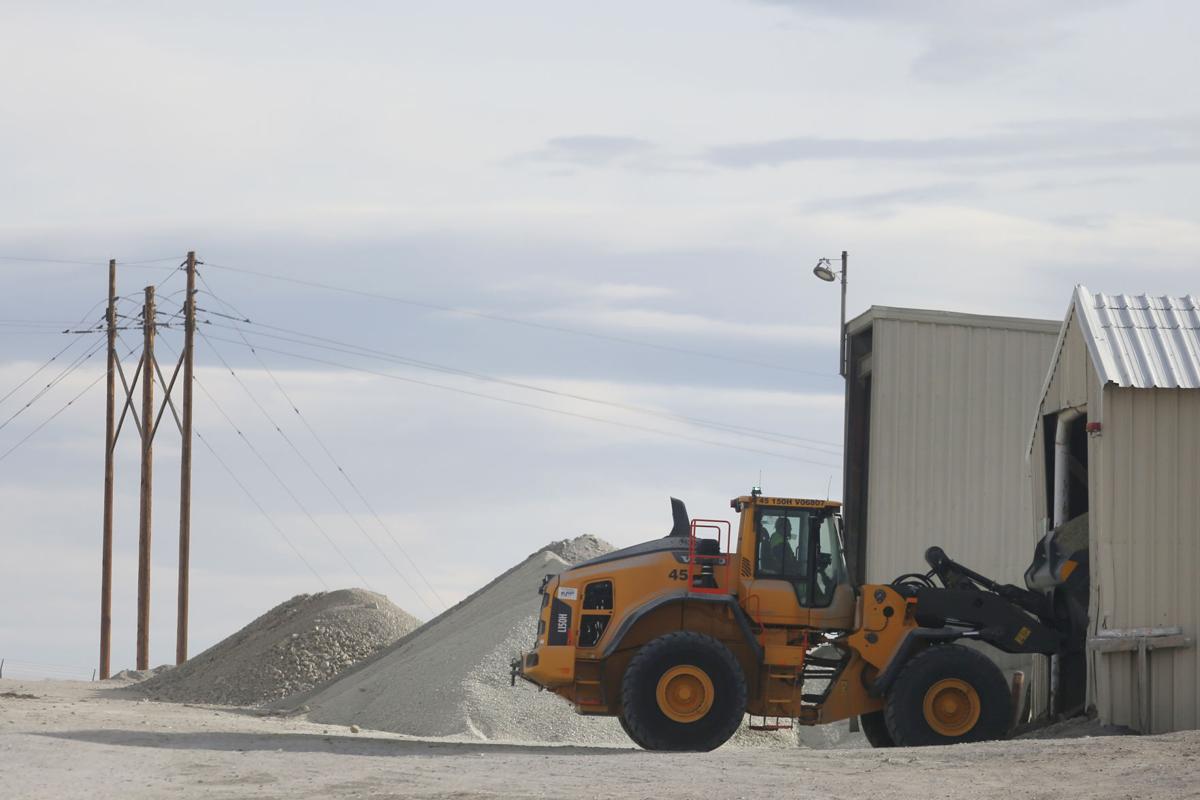 A worker operates heavy machinery at the Black Hills Bentonite plant on Thursday. 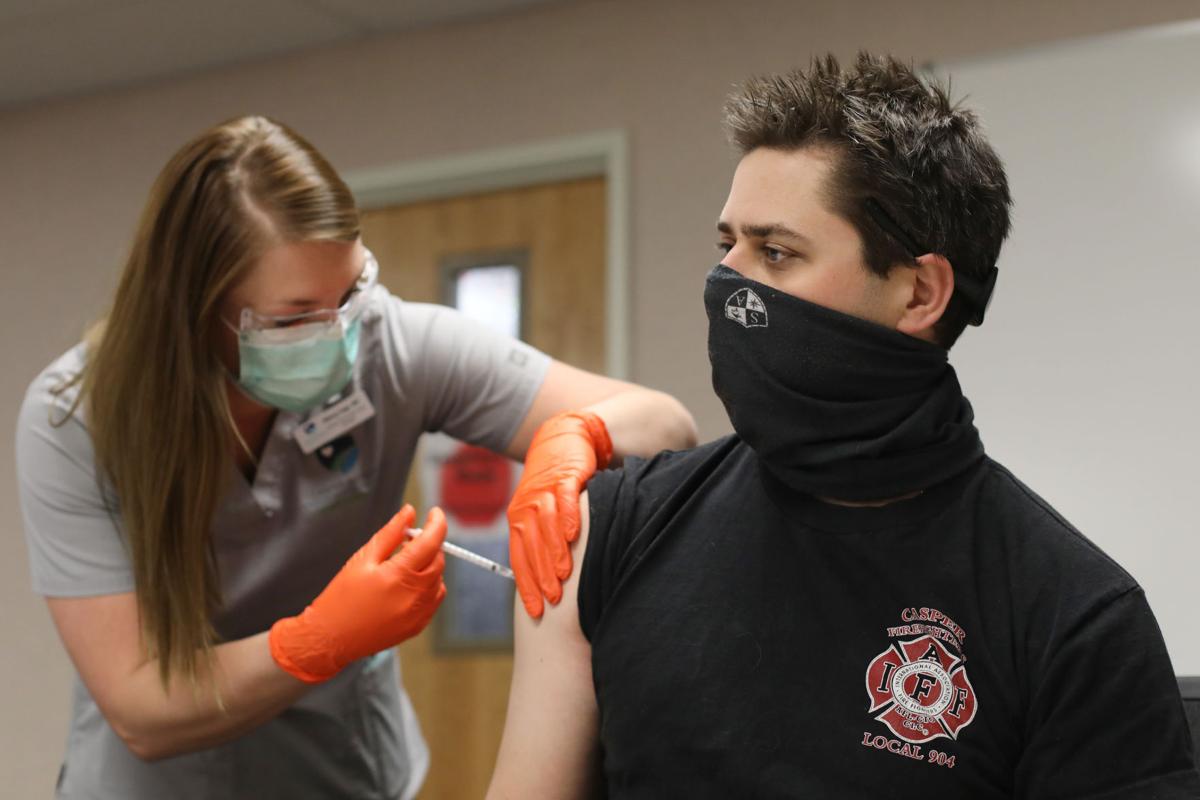 Few workers at the bentonite mine in Casper have been vaccinated against COVID-19. But Larry Madsen has.

Madsen, the manager at Black Hills Bentonite, had access to the vaccine because of his age. He is over 65 years old and fell into a group now eligible for the vaccine.

Laconic and direct, Madsen said he wasn’t nervous to receive the two doses.

“Neither one was a problem for me,” he said.

Madsen wants his workers at the bentonite mine to be vaccinated too. He recently reached out to state health officials to see when the miners and plant workers would be eligible for the coveted vaccine. Bentonite is a clay used in a wide variety of essential consumer products, and the federal government has deemed the employees to be essential workers.

But he was told most of his workers will likely have to wait until the state opens up the vaccine to more priority groups.

Meanwhile, energy and mining companies’ bottom lines have been vulnerable to the economic effects of the pandemic and recession. There have also been the costly logistics of keeping operations going even as workers call in sick or need to quarantine.

Madsen and several more leaders in the state’s energy and mining industry have started encouraging workers to seek out the vaccine as soon as they can. In a moment when some Wyoming residents are still hesitant to get the vaccine, the companies employing this large workforce will likely play a critical role in the Wyoming’s mass vaccination campaign.

The extra push by the state’s big employers could be crucial to not only distribute accurate information but also reassure Wyomingites that the vaccine is safe to take.

“We haven’t made the vaccine mandatory,” Madsen said, “but we have encouraged everyone, when it is available, to get it.”

Does the nature of Wyoming's workforce create an added challenge in combating COVID-19?

A focus on information

Critical infrastructure employees, like miners, are on the priority schedule for receiving the vaccine, but they’re pretty far down the list. The state is working to vaccinate as many people as it can, as quickly as it can. But supplies remain limited nationwide.

A medical ethics committee in Wyoming determines the priority schedule or makes recommendations based on two factors: preventing death and severe illness, and preserving societal functions. The state’s priority schedule is similar to federal guidance, but provides some latitude for county health departments to vaccinate certain groups in simultaneously if they can.

“There appears to be a lot of confusion over that,” Madsen said.

The Wyoming Survey and Analysis Center published new survey results showing Wyoming residents’ opinion of the vaccine has remained consistent over the past several months. About 40% of respondents said they would be somewhat or very unlikely to seek out a COVID-19 vaccine.

According to Dr. Anthony Fauci, the nation’s leading epidemiologist, about 75% to 85% of the country needs to be vaccinated to reach herd immunity.

As of Thursday, about 83,675 people in Wyoming have received the first dose of the vaccine, according to state data. That accounts for about 14% of Wyoming’s population.

Jeff Litzinger, Wyoming Machinery Company’s training and development manager, said the firm had started distributing educational material about the vaccine on a regular basis to workers.

“We’re letting them know when it might be available to them and encouraging them to get it when it becomes available,” Litzinger said.

“We really want to make sure they’re informed of the when and the where and the how,” he added.

The company employs roughly 550 workers at multiple sites across the state, providing heavy machinery to in energy, mining and construction businesses.

Over in Sweetwater County at Genesis Alkali, the nation’s biggest soda ash producer, the company has also rolled out a massive communications campaign in response to the pandemic, and information on vaccines has recently been a big focus.

Support local news coverage and the people who report it by subscribing to the Casper Star-Tribune.

David Caplan, Genesis Alkali’s communications director, said comprehensive messages about the virus have been sent to workers every week. The company employs about 800 workers in Green River.

“We have provided updates on the science as it has been advanced, in layman’s terms, on means of transmission and means to protect ourselves, our families and our co-workers,” Caplan said in an email to the Star-Tribune. “The logical extension of this is clearly messaging around COVID-19 vaccines, and separating fact from myth.”

Genesis Alkali contacted health officials to determine if some plant emergency response workers or rescue teams could meet eligibility requirements in an attempt to vaccinate as many workers as possible. The Wyoming Health Department also recently broadened who qualifies: Individuals 65 years and older or those with certain health conditions can now receive the vaccine in several jurisdictions. A number of Genesis Alkali employees have taken advantage and sought out the vaccine, Caplan said.

“I don’t know how many of our employees will ultimately elect to get vaccinated, but we have fielded many questions and there seems to be a lot of interest,” he said.

Some of Wyoming’s energy and mining workers won’t need much convincing.

According to Scott Kane, co-owner of the renewable energy company Creative Energies, all the solar technicians, craftspeople and support staff have interest in getting the vaccine as soon as it becomes available.

“We’re all looking forward to the vaccine,” Kane said. “And I’ll do everything we can to make sure all our employees seek the vaccine out at the earliest possible convenience. All of our team members at Creative Energies have been responsive and cared deeply about trying to keep one another safe, our families safe, our customers safe during the COVID-19 pandemic.”

Wyoming essential workers are not alone in having to wait a bit for the vaccine.

Vaccine supply remains limited, not just in Wyoming, but throughout the country.

But the number of vaccines available continues to increase.

On Feb. 11, President Joe Biden announced the country had purchased enough doses of the vaccine for the entire country. That means most Americans who want a shot should be able to have one by the end of July. But local and state officials don’t know when shipments will pick up.

For now, the vaccine rollout is taking place in phases.

Travis Deti, executive director of the Wyoming Mining Association, said he understands demand far outstrips supply of the vaccine right now. But he’s encouraged operators to prepare early by encouraging workers to seek out the vaccine when it’s available and coordinate with county health officials.

Several operators interviewed by the Star-Tribune underlined the critical importance of the vaccine to their businesses’ recovery. For many, vaccine availability for essential workers, like Wyoming’s miners, can’t come soon enough.

“We are waiting in line,” Deti said.

The health department stresses that COVID-19 vaccines are entirely free, and recipients won't be asked for their health insurance information or social security number over the phone.

Heavy machinery sits at the entrance of Wyoming Machinery Company in Mills on Friday. The company's training and development manager said the firm has started distributing educational material about the vaccine to workers on a regular basis. 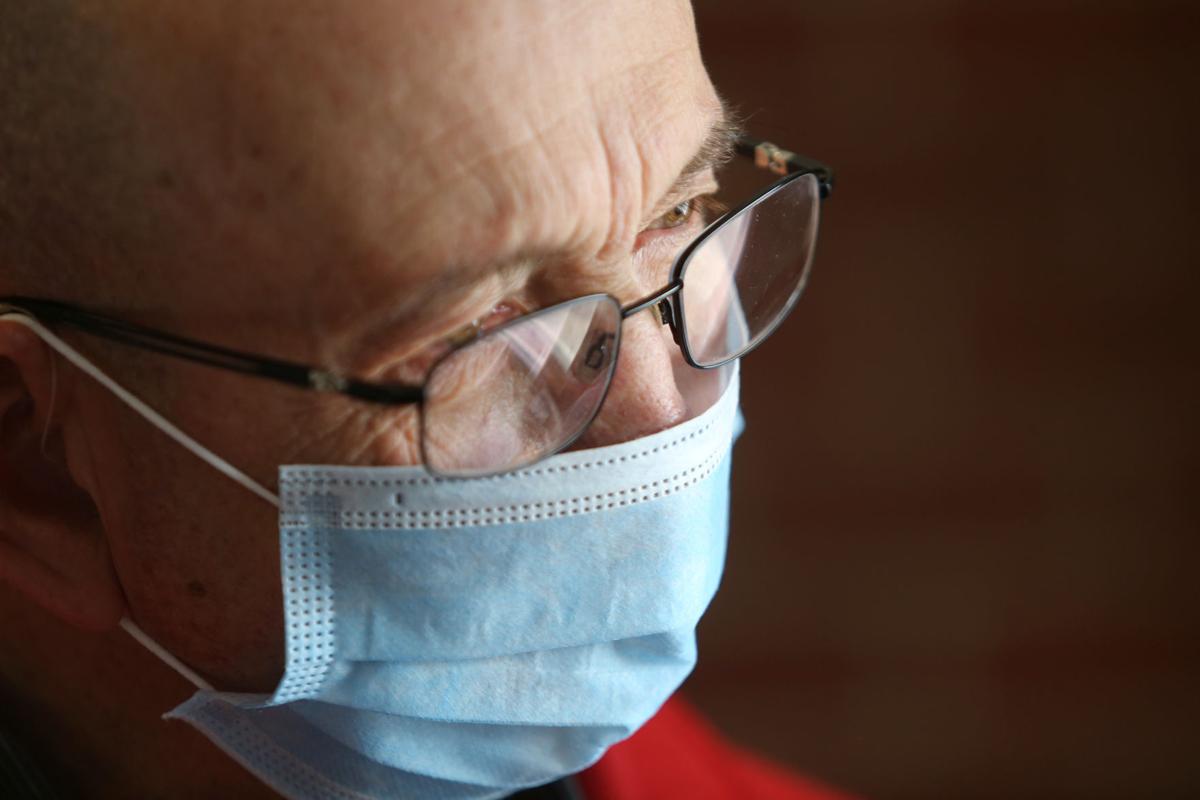 Larry Madsen, VP and CFO of Black Hills Bentonite, is one of few workers at the company who have had access to the vaccine. 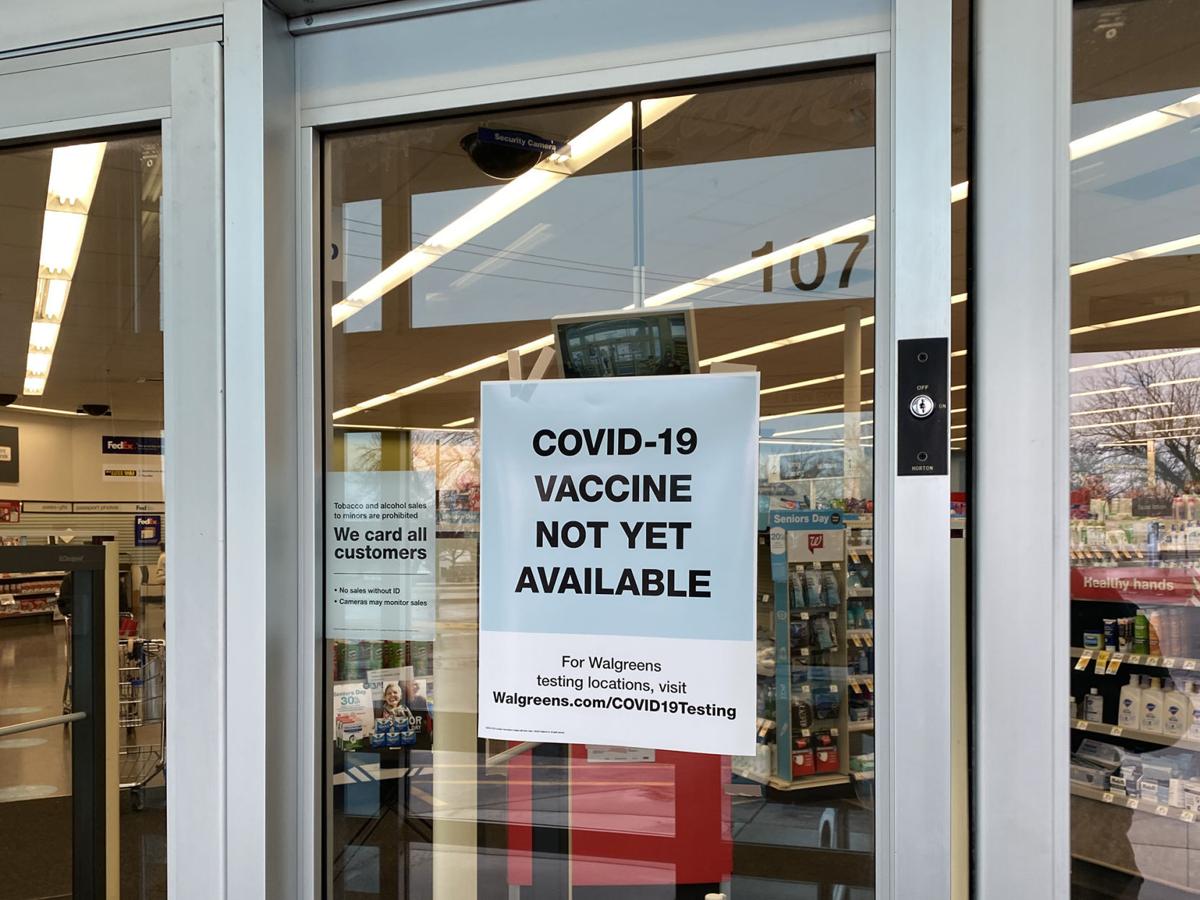 A sign posted at the entrance of Walgreens in Casper warns customers a COVID-19 vaccine is not yet available Tuesday, Dec. 2, 2020.

A worker operates heavy machinery at the Black Hills Bentonite plant on Thursday. 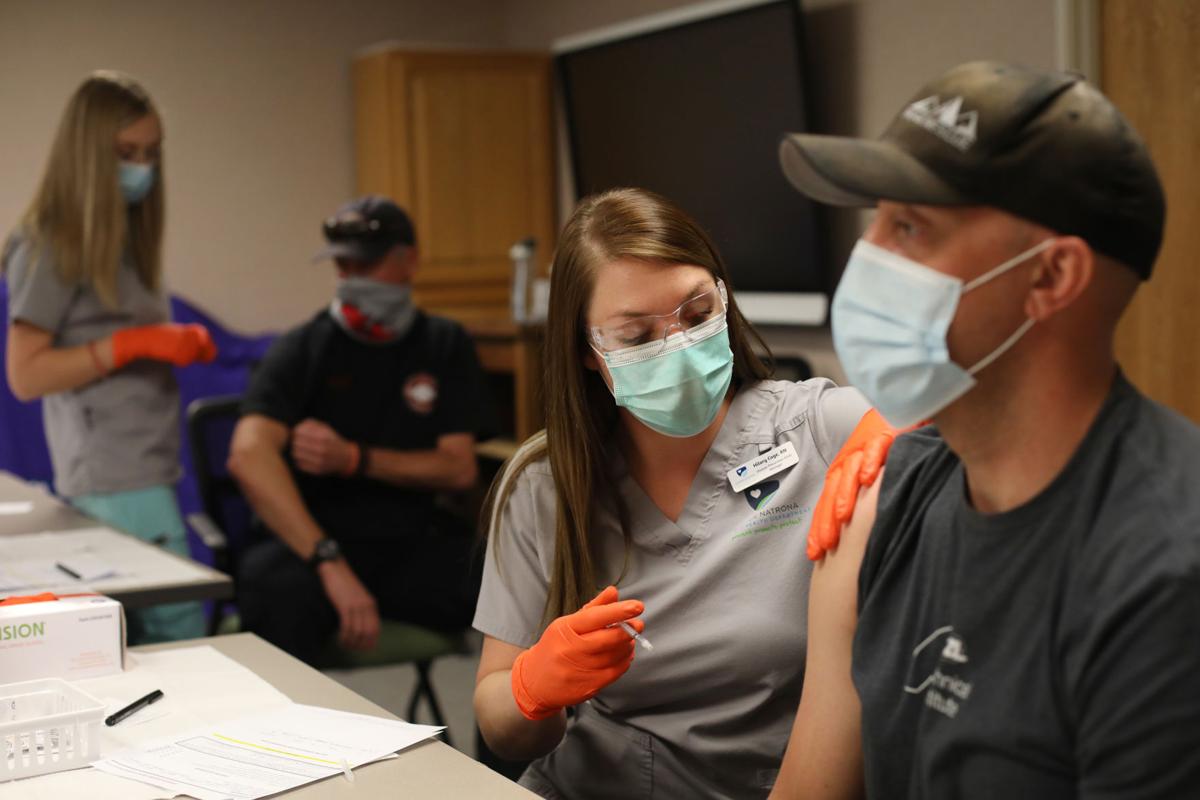 Clinic nurse Kendall Coursen helps administer the first doses of the Pfizer COVID-19 vaccine to firefighters who volunteered to be the first recipients in Natrona County on Dec. 16 in Casper. Wyoming might receive fewer doses of vaccine this month than expected.