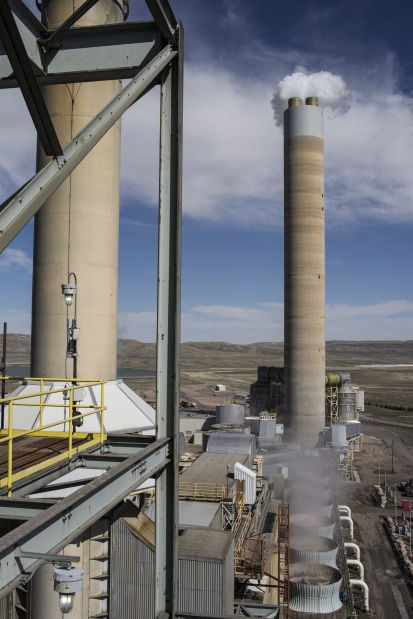 Steam rises from PacifiCorp's Naughton Plant on May 2 in Kemmerer. The plant will convert the largest of its three coal units to natural gas beginning in 2018. 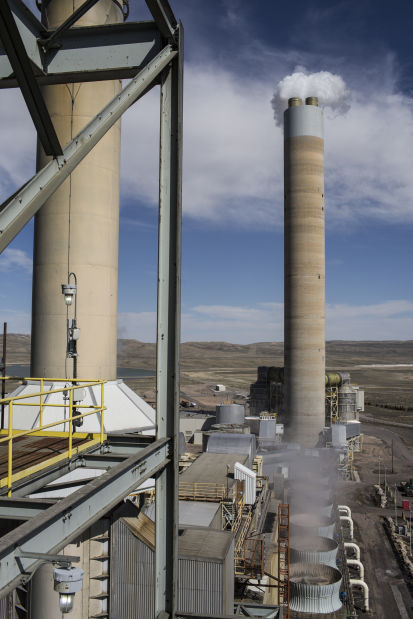 Steam rises from PacifiCorp's Naughton Plant in May 2014 in Kemmerer. The plant is run by PacifiCorp, which announced this week it would support legislation aimed at eliminating nearly all of Oregon's coal-fired power by 2030.

A question settled over the country's top coal-producing state Monday: What do the Obama's administration's new pollution standards on coal-fired power plants mean for Wyoming?

State politicians said it meant job losses and skyrocketing electric bills. Some analysts said it could be a boon for Wyoming's burgeoning wind industry, along with its natural gas and uranium sectors.  Others predicted some combination of the two.

The proposed plan is to cut carbon dioxide emissions from power plants 30 percent from 2005 levels by 2030. The rules are largely directed at coal-fired facilities, which account for roughly a third of the country's greenhouse gas emissions.

Each state will be given a targeted emissions reduction requirement under the proposal and then develop a plan to meet that threshold. Wyoming faces a 26 percent reduction of its carbon emissions under the rule, according to a preliminary analysis by the Georgetown Climate Center.

But in a state that supplied around 40 percent of the country's coal in 2013, the question was not only what Wyoming must do at its own power plants. The question was also what other states would do to comply with the standard. In the rule, the EPA predicted coal production will fall roughly a quarter by 2020. Coal use by the power sector will decline around 30 percent by 2030, the agency said.

Coal now accounts for around 40 percent of the country's electricity generation.

Wyoming's congressional delegation said the proposal was evidence the administration is trying to eliminate coal, arguing it would cost the state jobs and send electricity rates soaring.

"I'm glad it's just a proposed rule because it really isn't a workable rule for the country or for Wyoming," said U.S. Sen. Mike Enzi, a Gillette Republican. "It's going to have some very drastic effects, were it actually to go into effect."

EPA will hold a public comment period before finalizing the rule sometime next year. Legal challenges are widely expected to follow.

U.S. Sen. John Barrasso, a Republican, questioned if the EPA will allow states to develop their own emission reduction plans.

"Whatever plan the state comes up with has to be approved by the EPA and the EPA can just say no," Barrasso said. "They are the judge, the jury and the executioner."

Gov. Matt Mead, for his part, pledged to fight for coal's future, saying the regulations represented a "heavy-handed approach."

Wyoming's fortunes are intertwined with the coal industry. Mining companies employ 6,400 people in the state. Almost 90 percent of Wyoming's electricity is generated by coal. And in the 2011-2012 budget cycle, coal revenues accounted for $1.2 billion.

"It is a raw deal for Wyoming," said Wyoming Mining Association Associate Director Travis Deti. "If these rules go through and are accepted as is, it is certainly going to cost in Wyoming jobs, in revenues, in higher energy prices.

That view was hardly universal, however. The plan is decidedly modest, said Tyson Slocum, director of the consumer advocacy group Public Citizen's energy program. In 2013, U.S. emissions were already 15 percent below 2005 levels, meaning the country is already halfway toward meeting the threshold, Slocum said.

Utilities are also given considerable flexibility in determining how to reduce their emissions. They can employ energy efficiency measures at their plants or with their customers, or deploy cleaner power sources like natural gas, wind, solar or nuclear, he said. The proposed rule represents a shift in the way the EPA regulates pollutants. Previously, the agency regulated pollutants like nitrogen oxide, sulfur dioxide and mercury on a plant-by-plant basis. The new rule would set a standard for reducing carbon emissions across all of the state's power plants.

"If you're a utility, you're breathing a sigh of relief," Slocum said. "There might be some details to quibble with, but generally this is a road map utilities can live with because it's a pretty modest target and utilities can work with the states."

Wyoming's utilities were largely mum about the subject Monday. Rocky Mountain Power said it was reviewing the rule. Basin Electric Power Cooperative and Black Hills Corp. made the same point but added they would prefer to see carbon standards tackled by Congress rather than regulatory means.

"The overall impression from Black Hills Corp. is the new EPA greenhouse gas regulations on existing and modified electrical generating sources could dramatically reshape our energy economy and our delivery of reliable, affordable electricity to our customers," said Black Hills spokeswoman Sharon Fain.

Analysts said Wyoming's wind industry will likely benefit from the rule, helping to diversify the state's economy while driving job growth in a new sector. Wind was the second-biggest source of energy production in the state behind coal, accounting for 8 percent, or 4,415 thousand megawatt hours of electricity in 2013.

The rules will also help spur new projects in the state, they said, including the country's largest proposed on-shore wind farm in the 3,000-megawatt Chokecherry-Sierra Madre development near Saratoga.

"Under these regulations, coal is going to be a part of the generation mix for the country as a whole," said Gabe Pacyniak, an associate at Georgetown Climate Center. "We will end up with a more diverse power generation sector, which will help us achieve those carbon emission reductions."

The EPA's use of 2005 as a baseline year makes the emissions target achievable, said Robert Godby, an associate professor of economics and finance at the University of Wyoming. The economy was at full employment that year, meaning emission levels were higher than in 2008 when the economy entered the recession.

The 2030 dateline is five years earlier than the date when many of the state's coal plants are scheduled to be upgraded or retired, raising the prospect that some facilities will be shuttered slightly before their scheduled closing dates. Wyoming ratepayers will likely shoulder the costs of the early retirements, as utilities seek to recoup their investments, Godby said.

Still, the EPA's emphasis on allowing utilities to use natural gas, wind or nuclear power to reduce their emission levels could also turn out to be a positive for the state, Godby said.

"I'm actually pretty optimistic our state doesn’t come out too poorly," Godby said. "We’re going in a new world and this is part of the change. It’s disruptive, but it’s not unexpected. It brings uncertainty, and I think that’s what people are going to react to."

This story was updated to correct a characterization of EPA's predictions. The agency predicts coal production will fall roughly a quarter by 2020 and coal use by the power sector will fall 30 percent by 2030.

Bridger Coal Company will close its underground mining operation near Rock Springs in November. Ninety-four employees will be affected, though not all will be laid off.

92 Bridger mine layoffs have been anticipated for years

Fifteen of the workers will move to jobs at the neighboring surface mine, and 10 will retire. The company expects another 10–12 positions to open at the surface mine before the closure. That leaves upwards of 50 workers lacking a clear path to employment after November.

Feds promote emerging energy tech, with some help from Wyoming

First came Kennedy’s moonshot. Then, in 2012, came the Solar SunShot. This summer, U.S. Department of Energy launched the Energy Earthshots In…

Stray methane is a sneaky pollutant. It's also a thorn in the side of the natural gas industry.

Amid soaring natural gas prices, a boost for coal

Over the last decade, market forces and climate policies have propelled utilities away from coal. But high natural gas prices are nudging more coal into the electricity mix.

Wyoming's biggest utility is closing the curtains on coal

Unlike Wyoming, PacifiCorp is turning away from fossil fuels.

Wyoming's biggest utility is quitting coal. Few are satisfied with the plan.

Wyoming’s largest utility committed last week to exiting coal in the next two decades. The plan has drawn criticism from coal advocates and opponents alike.

Retraining of Wyoming’s energy workers has become a focal point for lawmakers and industry experts, who see potential for both calamity and possibility in the state’s changing job market.

Steam rises from PacifiCorp's Naughton Plant on May 2 in Kemmerer. The plant will convert the largest of its three coal units to natural gas beginning in 2018.

Steam rises from PacifiCorp's Naughton Plant in May 2014 in Kemmerer. The plant is run by PacifiCorp, which announced this week it would support legislation aimed at eliminating nearly all of Oregon's coal-fired power by 2030.