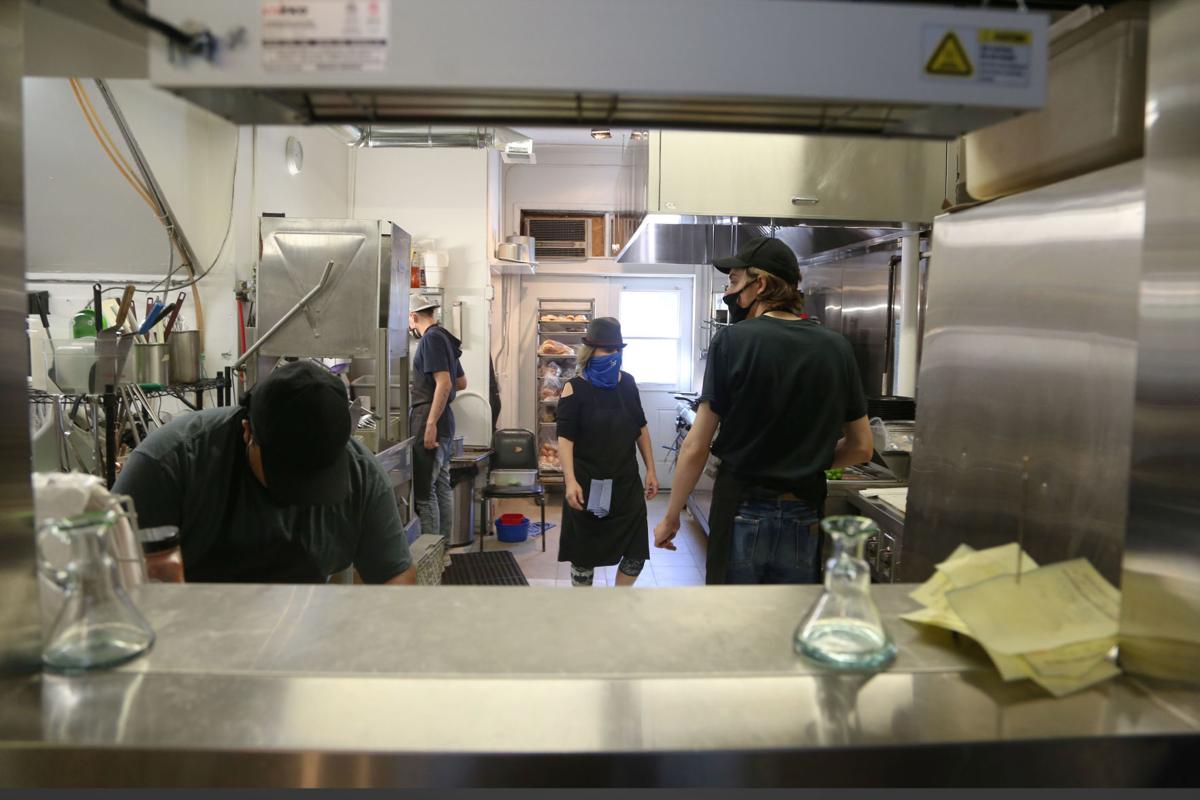 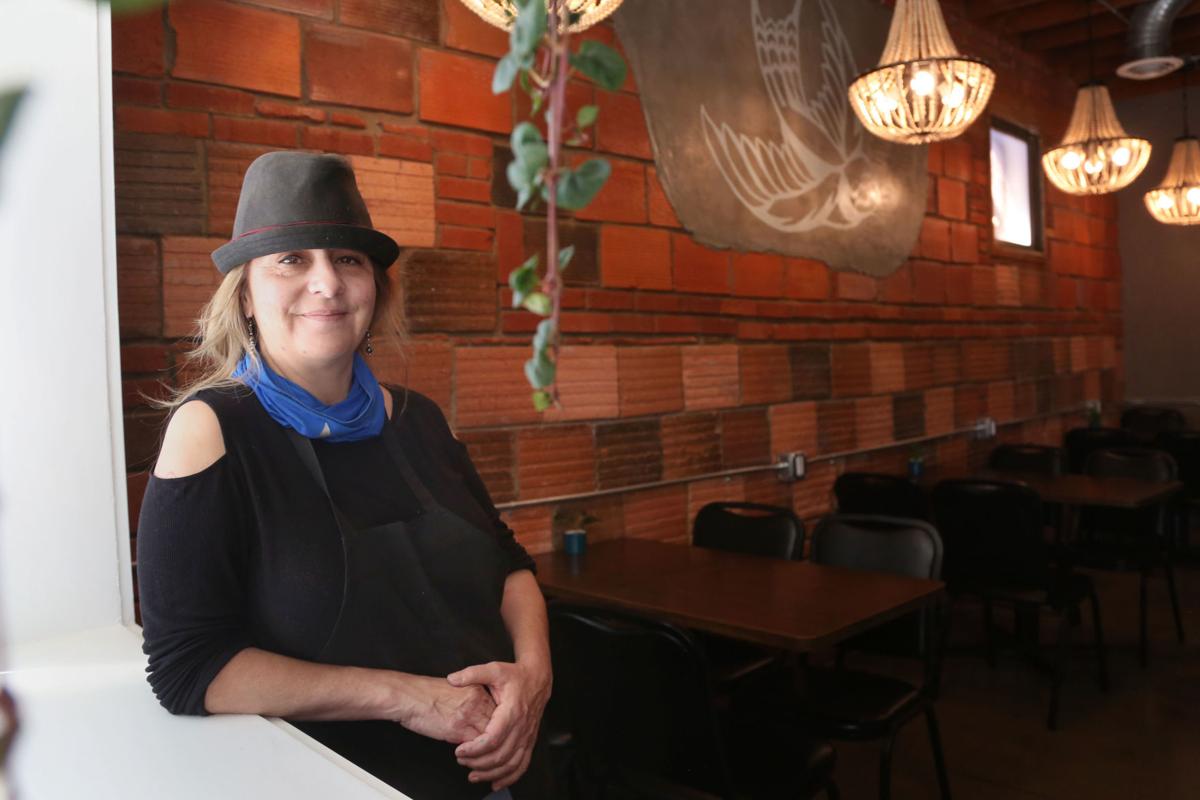 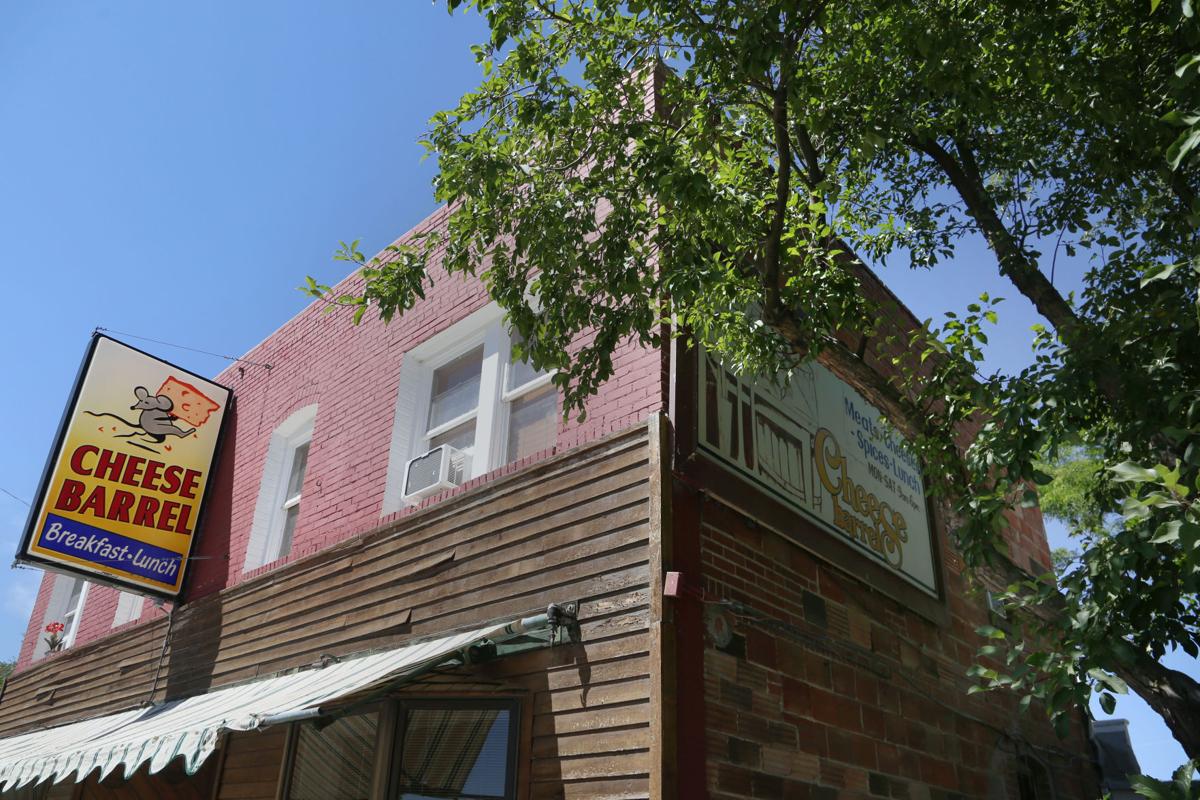 The new and historic signs for the Cheese Barrel hang on walls of the building July 16 in Casper. 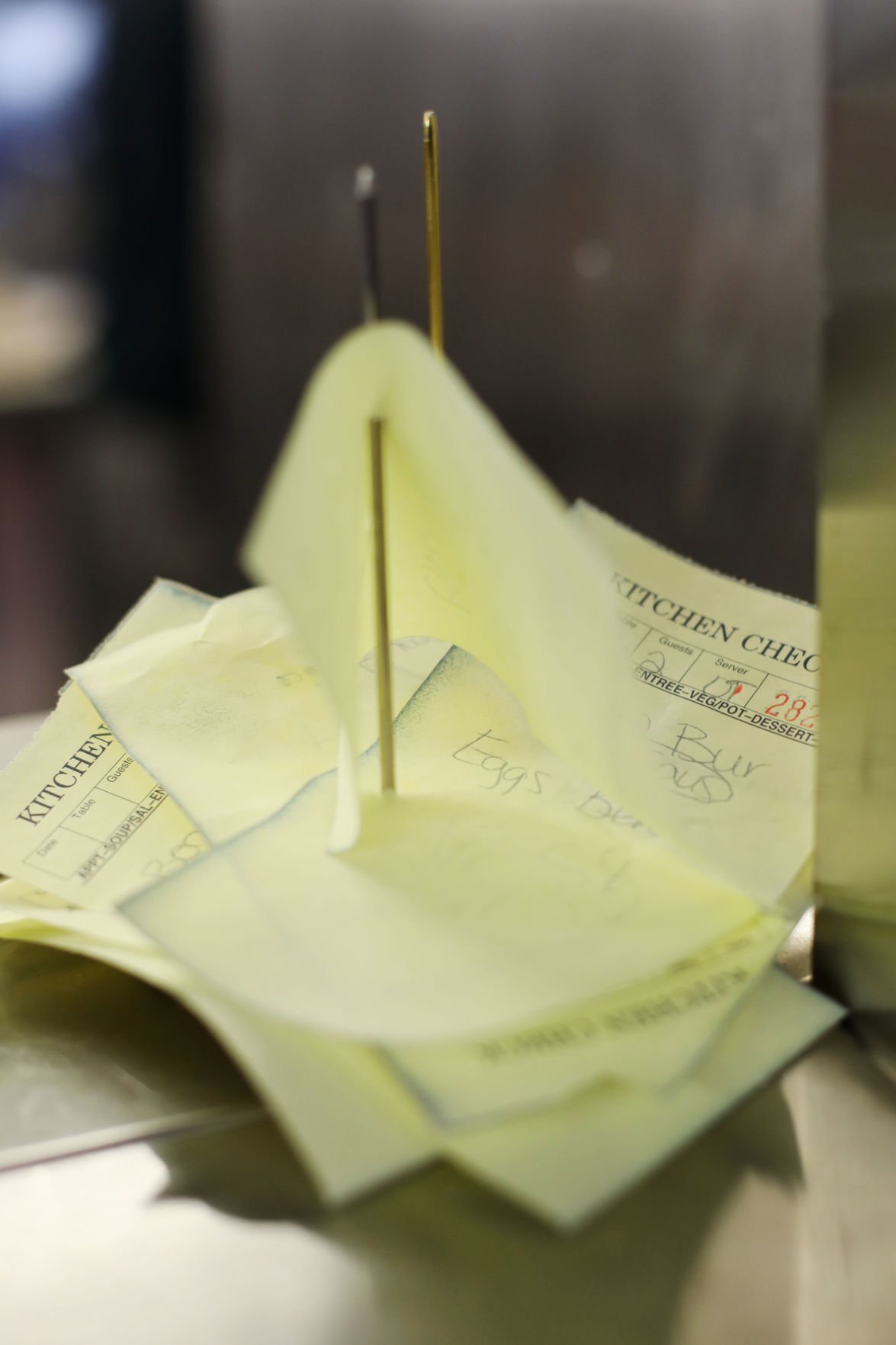 Completed order tickets are placed on a pin in the window of the kitchen at the Cheese Barrel restaurant in Casper on July 16.

Behind new small businesses are owners who’ve dreamed, planned, worked and hoped for success. Owners of two Casper businesses that opened this month amid the pandemic faced more uncertainty and extra steps, yet they’ve received a good response from customers.

“I think with all restaurants, especially in last few months, I think everybody’s had to learn how to adapt,” she said. “And that’s the number one key is having to be a chameleon and to adapt to the new environment, which we are doing. We’re doing it successfully.”

Though opening a restaurant during a pandemic has its challenges, Anderson said she hasn’t had to change much because she’s always focused on cleanliness and turnover of few tables.

She opened July 4 with a soft opening, about two months after restaurants in Natrona County were approved to resume indoor dining.

“A week before, I was getting a little nervous.”

But people have been growing comfortable and excited about going out to restaurants again, she said.

The Cheese Barrel at the Blue Bird offers both some of The Cheese Barrel’s original soups and other recipes — with help from the former owner — as well as some favorites from Anderson’s former bistro on a seasonally changing menu. She expanded the breakfast and lunch hours to Sunday as well.

Her own history is tied to the restaurant. Her father frequented The Cheese Barrel with 1949 classmates who called themselves “the rooster group.” A photo of them and their wooden rooster sculpture is on display, and so is a wall in the revamped space where customers can write their own memories.

“This is a little girl’s dream come true. I can’t believe it. I’m pinching myself every morning.”

The restaurant drew plenty of customers in its opening days, and cooks even had to triple the soup batches. The first days went well as they worked out a few kinks inevitable in any opening, she said.

“But everybody loves it. We’ve been getting positive feedback.”

Opening a restaurant during a pandemic has its challenges, Anderson added.

But she counts a major advantage for her restaurant that with only 10 tables easily spaced for social distancing, the restaurant was able to open at full capacity. Most restaurants and bars can only seat about 50% occupancy, which for many causes hardship.

The former Cheese Barrel had 20 tables before Anderson redesigned the floor plan.

Fewer tables helps the kitchen keep up with customers inside and new demand for pickup and delivery. Her previous restaurant turned over tables six to eight times on Sundays. She opted for no booths because they encourage people stay longer, and booths can’t be moved to accommodate larger groups, like a family of six of more.

Anderson doesn’t plan to add tables inside even after the pandemic, although she hopes to eventually create a patio dining area.

“I can serve faster with the program that we have. The biggest challenge is that you have a menu that has to complement your room.”

Anderson has always required hand-washing, cleaning and sanitizing in her restaurants, so most of the new rules from the health department were already covered.

“And when we’re talking about what is different, the only thing that’s different for me as a restaurant owner for over 30 years is wearing masks.”

Kitchen and serving staff wear masks, and the majority of customers do as well.

“And my servers have to kind of take the masks down. Until they find a mask that you can speak through, it is very hard for a server to communicate, and it’s very hard for customers to hear a server. That’s probably the only major issue that we have with masks is just being able to communicate.”

The Cheese Barrel at the Blue Bird offers delivery though Windy City Delivery, which provides a percentage of their sales back to the restaurant.

“So if the state does go into requiring restaurants to go back into no more indoor dining, back to curbside and delivery, it gives me the ability to think ahead, work ahead and make sure my people are paid for,” she said. “So that’s a really important relationship. It probably costs a little bit more. But like I said, you’re supporting local.”

Another challenge is increased food prices. Produce prices have risen in some cases up to 40% and proteins are up 15 to 20%.

“I raised my price a little bit,” she said. “It’s a premium issue. You make sure you have a darn good product.”

‘Thankful for where we’re at’

Oil City Beer Company co-owner Dan Graham had never opened a business before the pandemic, so he doesn’t have anything else to compare it to. He and his business partner opened the new brewery June 27.

Their business focuses on fairly traditional yet varied craft beer with rich flavors and “a blue collar, Casper-type feel” that’s part of the owners’ background and work ethic, Graham explained.

In July last year, they committed to their current space on Legion Lane in east Casper, and began preparations including inspections, construction and applying for licensing. He and his business partner were recently laid off from Halliburton and have invested their time since in opening and running the new business.

As they proceeded according to existing and new regulations, restrictions to reduce COVID-19 spread were eased to allow indoor seating by the time they opened. Their business relies on sales at their in-house tap room and eventually through the restaurant when they begin outside distribution.

“So it really seemed like things went as they would have went if there was no pandemic, with that just looming in the background of, ‘Well, things might change and you may not be able to open’ type thing,” Graham said. “There was a lot of anxiety leading up to getting open.”

The pandemic brought new regulations and considerations to what’s normally a long process to open a brewery.

“‘What do we have to do to serve people in a safe manner?’ There’s been a lot of thought into that,” Graham said. “Wearing a mask and then making sure our seating is properly spaced was one of our considerations.”

They’d at first envisioned pouring at brew festivals their first summer and hosting concerts, home brewing competitions and other events. The festivals have largely been canceled and they’ve scaled back gatherings. The owners were able to host an opening celebration earlier this month with local musicians in the back parking lot and look forward to expanding into more activities in the future.

One of their aims has been to work with local food trucks, which now offer fare in the parking lot on weekends. Opening during a pandemic has brought some challenges, though business has been steady.

“There’s no doubt we’re in one of the best states you can possibly be in. There’s no doubt. If you’re East and West Coast, there’s no way you’re doing what we’re doing right now. Gov. Gordon, Wyoming, the city of Casper, are wonderful places to be for this, just flat out. We’ve got to be thankful for where we’re at.”

Indoor dining at Casper restaurants likely to reopen this week

Natrona County residents will likely be allowed to eat inside of local restaurants beginning later this week.

Casperites get back to feeling 'normal' as restaurant dining rooms reopen

Friday was the first day in seven weeks restaurants in Natrona County were allowed to welcome customers to eat inside their establishments.

Cancellations and stymied business activity during the novel coronavirus pandemic have wreaked havoc on Casper's local economy. With low sales tax collections, the city is looking to cut more than $9 million in anticipated spending over the next year and a half.

“The following recommendations provide a roadmap for the healthy rehabilitation of our local economy,” reads the draft, which was compiled by a group of local agencies.

For the first time in weeks, Natrona County residents can now eat at restaurants, albeit only in outdoor settings and with social distancing restrictions.

What's in a haircut? Residents step out to take solace in routine as salons, personal care businesses reopen

For many, the routine things no longer permitted — a manicure, a good exercise, a fresh haircut — are the changes that have taken the heaviest toll.

Some businesses make preparations to reopen this weekend in Casper

Numerous Casper businesses have said they will reopen tomorrow, but they will have to do so while meeting new safety restrictions.

More than 100 residents submitted comments to the city, with opinions ranging from those who felt no restrictions should be lifted until testing could be expanded to those who wanted city officials to “flip a switch” and immediately lift all restrictions.

How to Build Up Your Credit from Nothing

How to Build Up Your Credit from Nothing

The new and historic signs for the Cheese Barrel hang on walls of the building July 16 in Casper.

Completed order tickets are placed on a pin in the window of the kitchen at the Cheese Barrel restaurant in Casper on July 16.