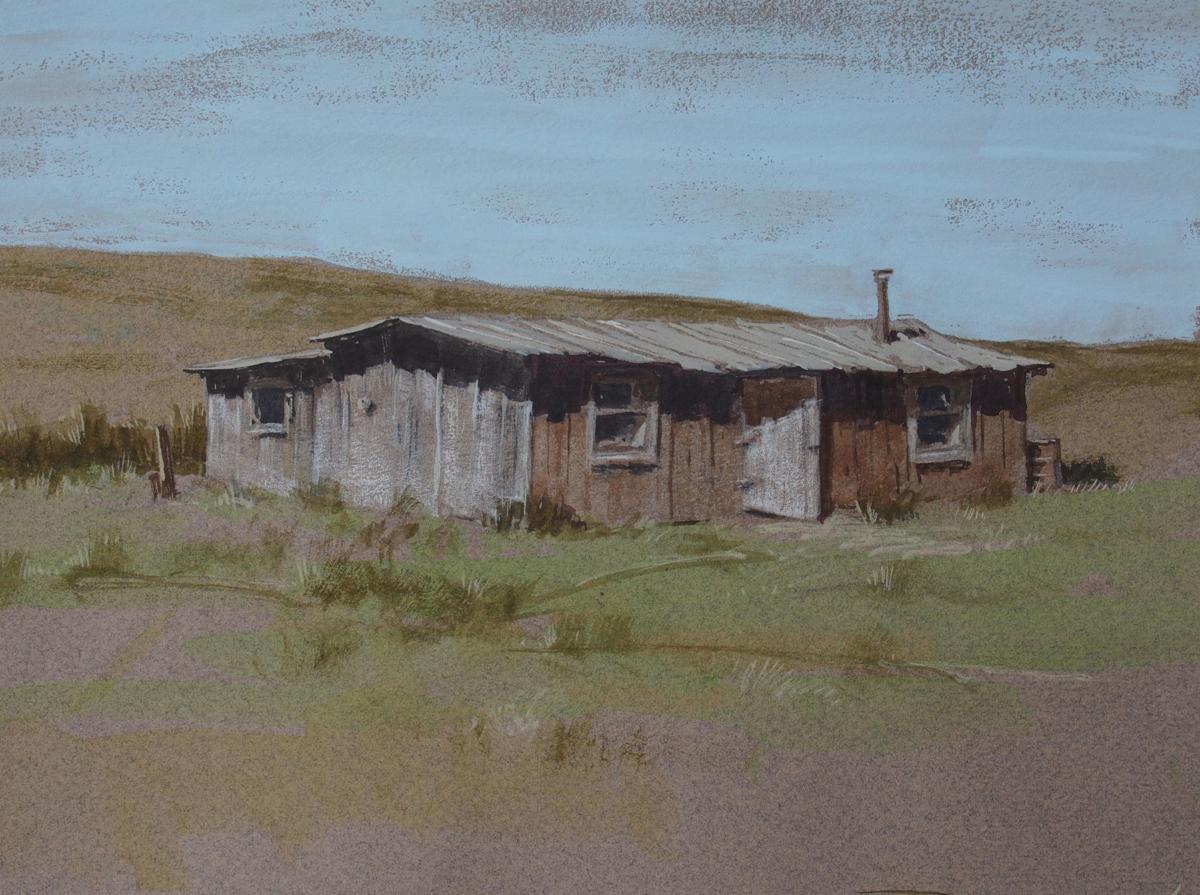 “An Open Door Policy” is a watercolor gouache on toned paper by Joel Ostlind. The painting was inspired by a scene of a storage shed with added features from his imagination. It appears in his “Linework to Linen: The Prints and Paintings of Joel Ostlind” at The Brinton Museum in Big Horn. 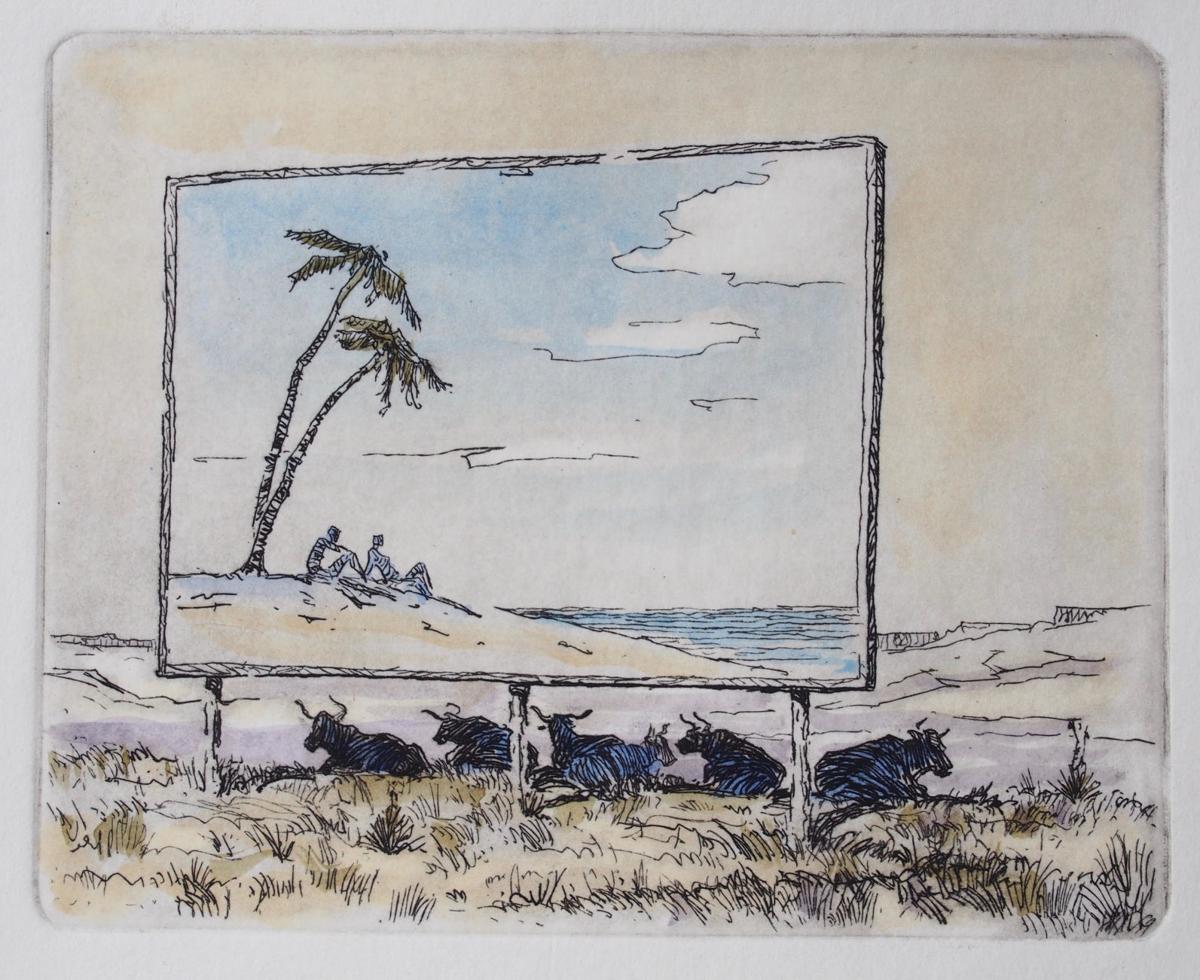 “A Shore of the Sagebrush Sea” is an etching with hand coloring in watercolor paint by Wyoming artist Joel Ostlind. He created the piece during a cold Wyoming March while his wife, Wendy was in Baja, he said. 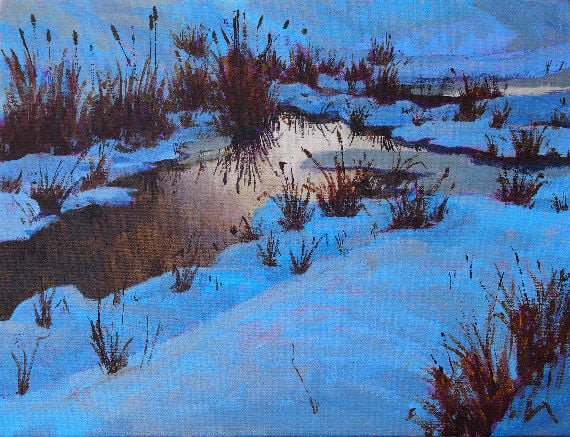 Acrylic on linen painting "Dawn on Darlington Creek" is among Joel Ostlind's artwork on display at The Brinton Museum in Big Horn. The show features intaglios and paintings by the Big Horn artist, who will give a printing demo July 25.

Life in cow camps gave Joel Ostlind an appreciation for the open country as it moves through the seasons. The Casper native’s years cowboying through the West imbues his art.

“Linework to Linen: The Prints and Paintings of Joel Ostlind,” on display through Aug. 4 at The Brinton Museum in Big Horn, features about 60 of his works inspired by Wyoming landscapes, ranches, cowboys, horses and fishing, according to the museum.

He’ll give an intaglio printmaking demonstration 7 p.m. Thursday at the museum.

A cowboy since the mid-1970s, Ostlind built an art studio in 1991 in Big Horn. Art been his sole pursuit since, he said.

“Whatever you pursue, if you get it right, it can be very rewarding,” he said, “and it’s fun do something that’s rewarding and then be able to frame it and put it on a wall.”

A friend he’d worked on ranches with once asked him about a charcoal drawing.

Ostlind grew up in Casper with a love and interest for art and Wyoming. He remembers seeing a show at First National Bank in Casper of Wyoming artist Conrad Schwiering’s work.

“As a kid looking at the landscape like that, it looked unattainable,” he said.

At Casper College, he took a watercolor painting class and a basic design class, which comprises the entirety of his formal art education, he said. A black sketchbook in a Christmas care package from his parents rekindled his interest in art while he was working on a Texas ranch. He started sketching in the evenings.

He’s worked in ranches in Texas, Oregon, Montana — where he started a family with his wife, Wendy — and Wyoming.

While working just over the Montana border at the Padlock Ranch, Ostlind showed some of his work to the art director with the Leo Burnett advertising firm and a photographer who were both there for a Marlboro ad shoot, Ostlind said.

“And they were very complimentary,” he said. “So that was first time I ever had a professional review of my work and started working on it more seriously at that point.”

He returned to Wyoming with Wendy in 1987, and he started teaching himself art through books in the public library in Sheridan, he said. They bought their home in Big Horn in 1990, where he built his art studio that winter and became a full-time artist by early 1991. Gillette artist Bob Barlow connected him with some people in the art world, “and things kind of took off from there,” Ostlind said.

Ostlind is among the important 20th-century American printmakers featured in the limited edition book, “The American Sporting Print – 20th Century Etchers and Drypointists” by John T. Ordeman, according to the museum. His work has been shown in Wyoming and surrounding states, including a previous solo show at the Brinton and a one-man show at University of Wyoming Art Museum. Ostlind was the featured artist in the Coors Western Art Exhibit & Sale at the Denver Stock Show in 2002. Besides many private collections, his work is in public collections including the National Museum of Wildlife Art in Jackson and the prestigious Art in Embassies Program.

With his current show, The Brinton Museum has collaborated with Ostlind and master printmaker Jim Jereb under Ostlind’s direction to create a limited-edition book that celebrates etching and letterpress printing.

Ostlind is known for being a printmaker who still works with the more traditional style of etching. Some these days use computers to generate imagery and create prints with photo etching, he said.

“But I still like the old-school method of hand-drawing an etching on a plate,” he said. “And just the manipulation of the lines on the plate are rewarding but also tedious and sometimes very humbling.”

He creates his prints by hand in his studio, all the way from preparing the plates through printing the images on his press. He used to frame his own pieces, through Wendy has mainly taken over the framing, he said.

“It’s very hands on,” he said, “and when I print them, I can manipulate the ink a little bit in a way that is nice, add a little more interest to things.”

For his demo, he’ll print one of his images in the show on a copper plate and explain the intaglio printmaking process, he said. Many find it a mystery, as he once did, he said.

“Well, when I started reading about etching, I thought, ‘Well this sounds like kind of a magical process,”’ he said. “I thought, they’re leaving something out. But I started working with that and learned that what they left out was just the term, ‘just right,’ that whatever you’re doing, you have to get it just right.”

Every part of the process takes precision, whether he’s preparing the plate or drawing with a needle to scratch through the wax, and even while mixing the ink, he said. It takes a couple of days to prepare plates for etching. Then he sometimes creates a proof print and re-etches several times. Once it’s etched well, printing often takes just 10 or 15 minutes to create the impression, he said.

Ostlind’s art also takes him into the outdoor settings that inspire his imagery. When he paints landscapes, for example, he often starts with studies in the field and develops them into larger works in his studio.

“And it’s a refreshing thing after working with etchings, which are kind of mechanically oriented, and there’s some tedium in it,” he said. “So it’s nice to go out and work with paints and remake a landscape. It just has the best, rejuvenating feel with it.”

Ostlind describes his style as “boiled down.” He likes to work with just the major elements but keep the values — the lights and darks — accurate.

His art shares with others what he sees and appreciates, especially in Wyoming, he said, and he’s glad people enjoy how he interprets the landscapes.

“I like to keep my artwork on a broad enough technique so that the viewer can fill in the blank — the unrefined imagery that I have,” Ostlind said. “They can fill it in with their own knowledge and emotions. Which is which is fun. And I’ve had some very interesting comments about some my art, where I’ve realized people have seen things very different from what I had set out to portray in the art.”

“Linework to Linen: The Prints and Paintings of Joel Ostlind”

Info: Regular museum hours 9:30 a.m. to 5:00 p.m. daily thru Labor Day. Museum admission is $10, $8 for students and seniors, and free for children 12 and younger, American Indians with tribal I.D., veterans with military I.D. and active military with military I.D. and up to 5 members of their families. For more info go to thebrintonmuseum.org.

The world’s oldest continuously published Western Americana magazine chose the 10 museums out of hundreds that apply for the award each year.

“An Open Door Policy” is a watercolor gouache on toned paper by Joel Ostlind. The painting was inspired by a scene of a storage shed with added features from his imagination. It appears in his “Linework to Linen: The Prints and Paintings of Joel Ostlind” at The Brinton Museum in Big Horn.

“A Shore of the Sagebrush Sea” is an etching with hand coloring in watercolor paint by Wyoming artist Joel Ostlind. He created the piece during a cold Wyoming March while his wife, Wendy was in Baja, he said.

Acrylic on linen painting "Dawn on Darlington Creek" is among Joel Ostlind's artwork on display at The Brinton Museum in Big Horn. The show features intaglios and paintings by the Big Horn artist, who will give a printing demo July 25.