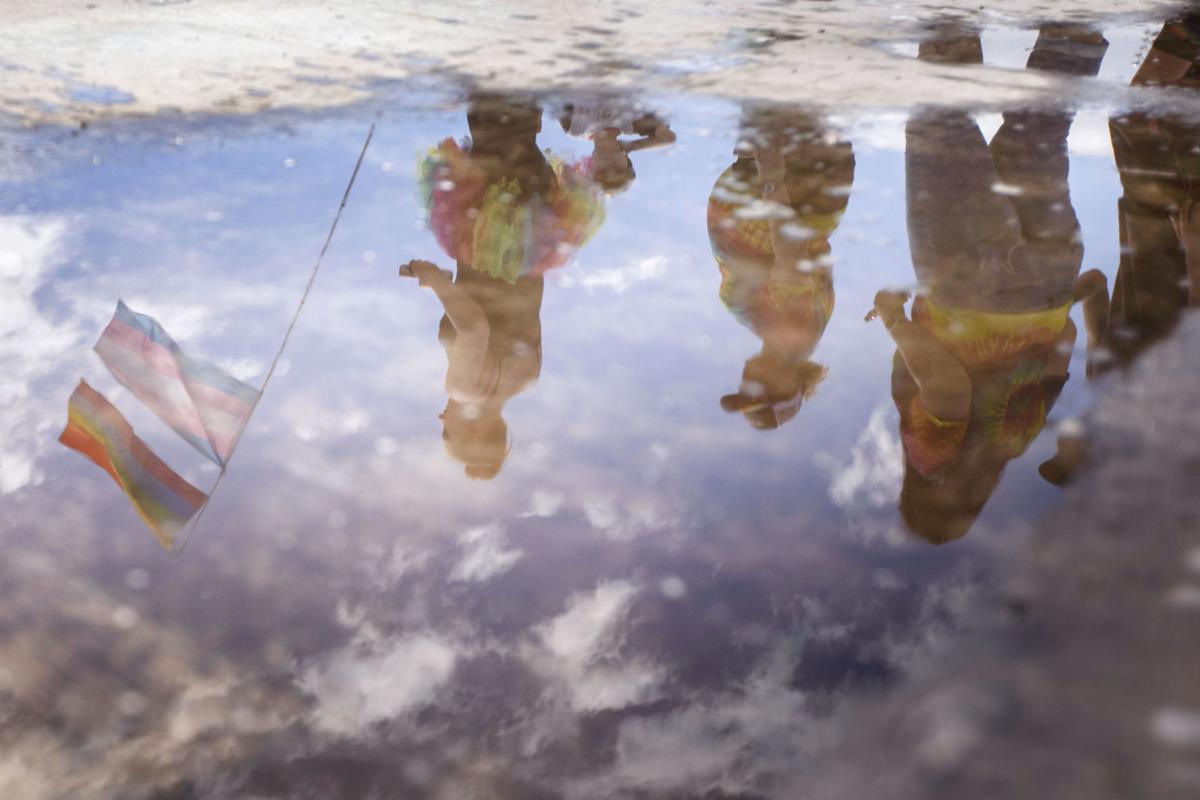 A rainbow flag representing LGBTQ pride and a blue, pink and white flag representing transgender pride is reflected in a puddle as people wearing rainbow clothes arrive at Crossroads Adventure Park in Casper during last year's Pride in the Park event. This year's local Pride Month celebrations include Drive-Up Pride on Saturday at the Casper-Natrona County Health Department parking lot. 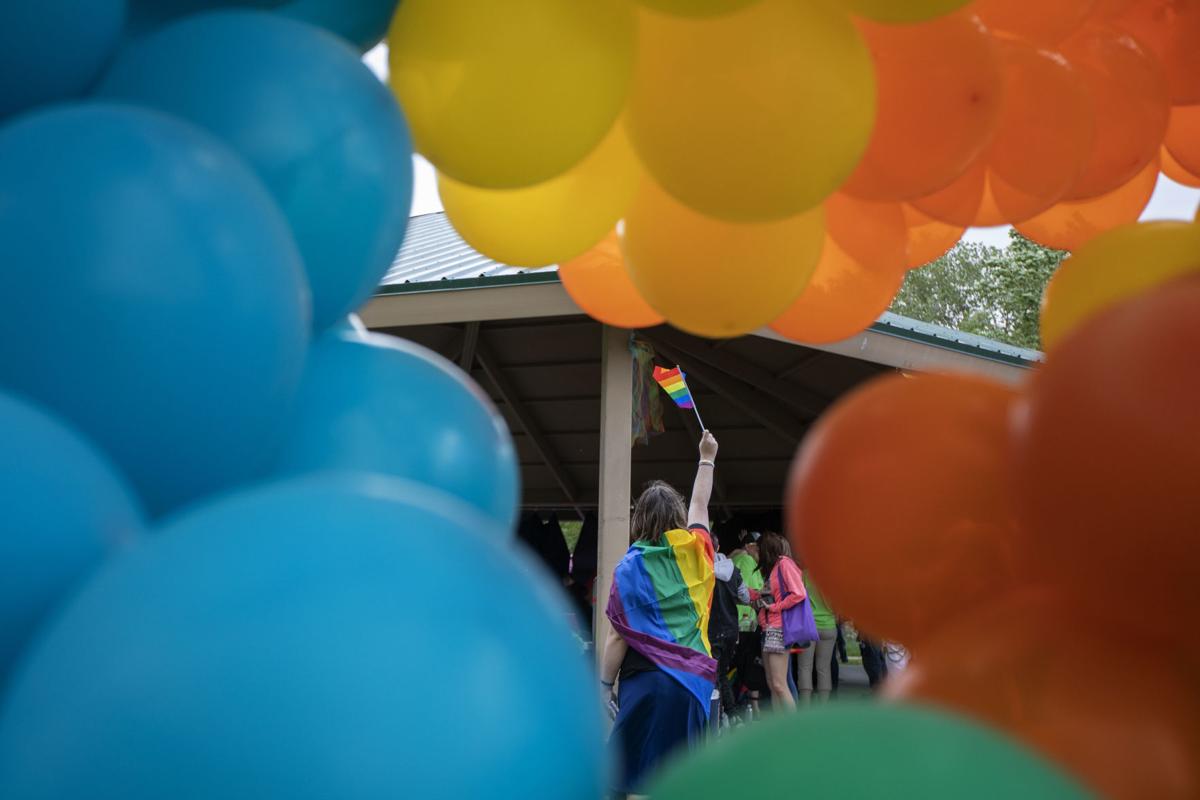 Framed by colorful balloons, Sami Saunders wears a rainbow flag as a cape while she holds up a smaller flag representing LGBTQ pride during last year's Pride in the Park at Crossroads Adventure Park in Casper. 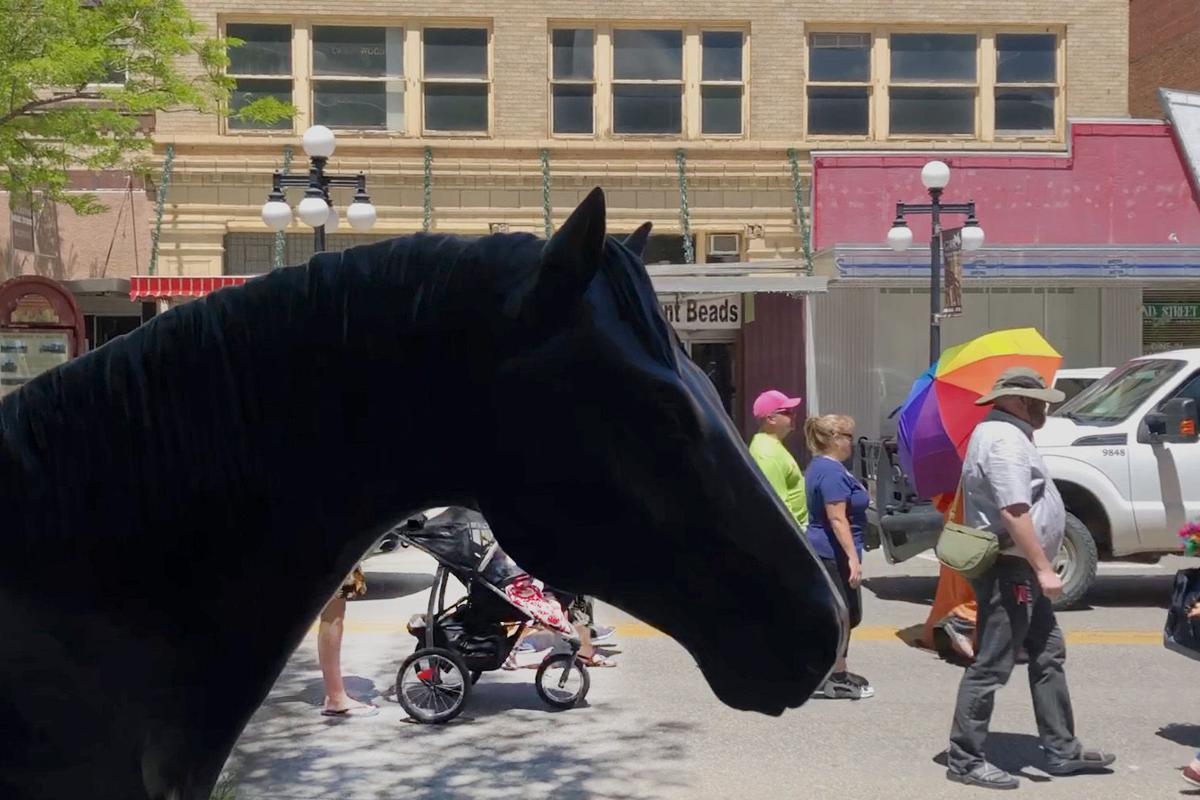 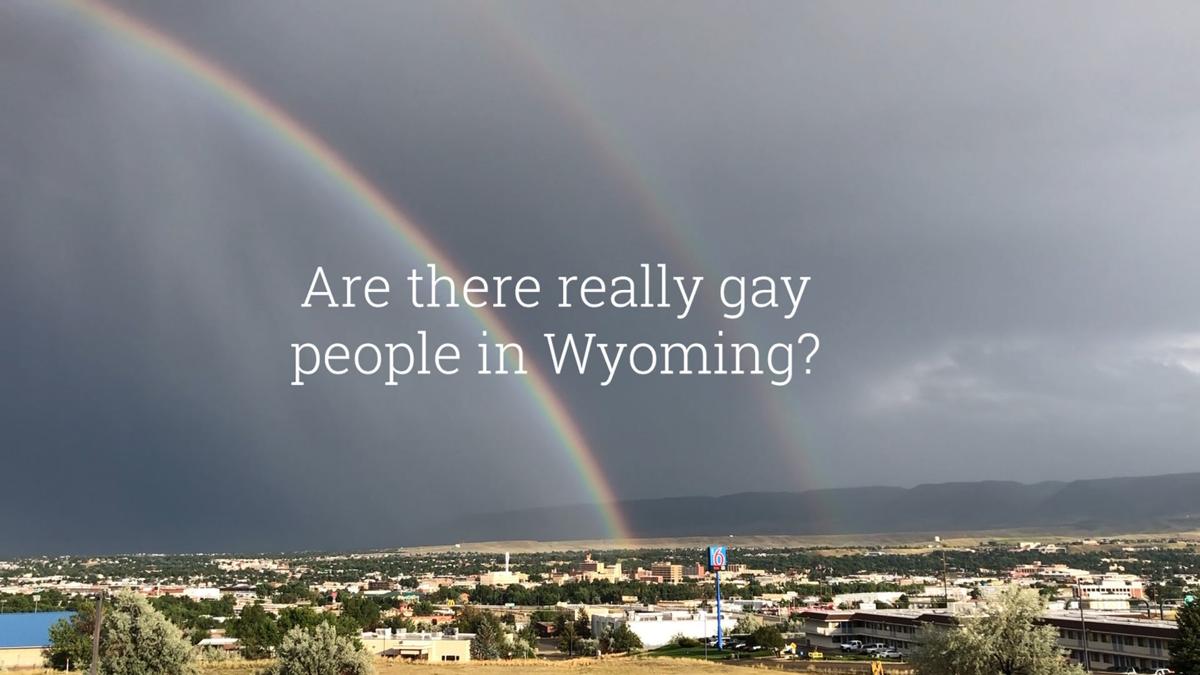 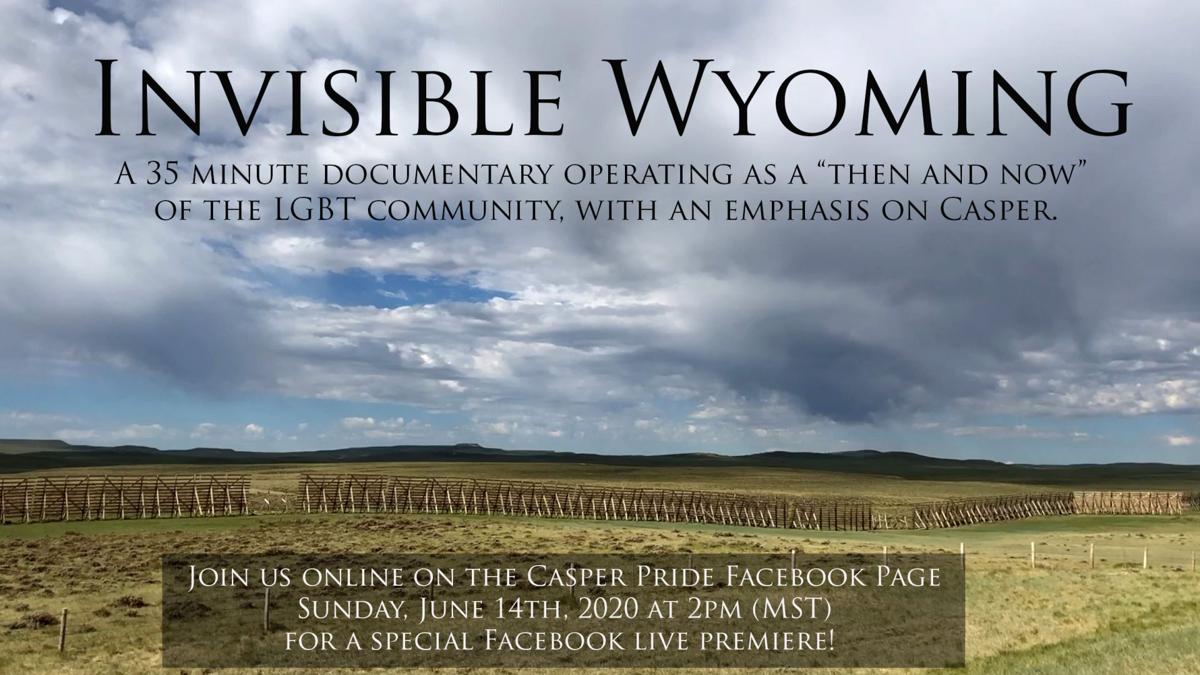 Attendees can cruise into this year’s annual June celebration of the LGBTQ community in Casper.

Drive-Up Pride, set for Saturday at the Casper-Natrona County Health Department parking lot, offers a prize for the best decorated car, free HIV testing and a chance for attendees to have their picture taken under a rainbow balloon arch — all without leaving their cars. The event is free, including handouts of cold refreshments and goody bags.

On Sunday, Casper Pride will host an online premiere via Facebook Live of “Invisible Wyoming,” a documentary by Patricia McInroy followed by a Q&A with the photographer and filmmaker from Casper whose work often screens in film festivals.

The 2020 Casper Pride Weekend, with its PRIDE in the Park and other usual gatherings, is postponed because of the coronavirus pandemic, but organizers found a way celebrate during Pride Month in the social distancing era.

“I don’t think I’ve seen anything happening like this in the Pride world just yet,” Casper Pride chairperson Mallory Pollock said. “I mean, I’ve seen a lot of online, but I think this is pretty unique.”

The event is open to all, and attendees can pull into Drive-Up Pride from Midwest Street into the Health Department parking lot and stop under the rainbow balloon arch created by Sabrina Spears Events to have their picture taken.

The department will pass out goody bags, and the first 60 cars will receive “porch Pride kits” from United Way of Natrona County with decorations and other supplies to help people create their own Pride celebrations at home.

Participants are invited to decorate their cars however they see fit for a chance to win a large giveaway basket for the best-decorated car, Pollock said. The Health Department will provide free HIV testing as it has in previous years during PRIDE in the Park.

Casper Pride, which spearheads Casper Pride Weekend, is considering National Coming Out Day on Oct. 11 for the postponed festival, Pollock said. In the meantime, the Casper-Natrona County Health Department approached the nonprofit about a drive-thru event, and many people pitched in to make it happen.

“So it looks different this year” Pollock said. “But I hope to see the same faces and new faces, and I hope that everyone still goes out and comes down to see us.”

McInroy started her photojournalism career at the Star-Tribune while attending Casper College and now teaches as an adjunct photography professor at Rocky Mountain College of Art + Design. Her video work has screened at festivals across the U.S. as well as in Europe and Latin America, and her art has shown at galleries in Los Angeles, New Mexico, Denver and Connecticut, according to her website.

The new documentary explores the queer community in her hometown and compares the ’80s and ’90s with today, she said. McInroy interviewed locals including participants at last year’s Casper Pride Weekend, Matthew Shepard’s parents and substitute teacher and school Gay Straight Alliance Club sponsor Kaycee Cook from Casper, who last year was dismissed and reinstated at a Cheyenne middle school after she reported anti-gay and racist flyers to LGBTQ advocacy group Wyoming Equality.

The title refers to a community largely invisible to the population at large, McInroy said. She also hopes the film will shed light on other lesser-known facets, like the groundwork young people often don’t realize people laid before them partly because they had to stay under the radar about it.

“I’m also hoping to share with the LGBT community as a whole more about places like Wyoming, because I don’t feel like they’re very well represented in those communities,” she said.

The end of the film rounds up pride events growing around the state.

“I think people feel isolated a lot of times,” she said. “And so this is a way to break through that.”

She came away from the project with a sense of exciting change — like Casper and Wyoming’s growing pride events — that reflects what’s happening nationally with young people.

“They’re so optimistic and brave and they’re also open minded; that’s really true,” McInroy said. “But at the same time, there’s a lot that hasn’t changed. And so that’s really kind of how it ends up being. And I think that’s true on a lot of levels both in Wyoming and across the country, especially for rural communities. I just hadn’t seen a lot of places that are less populated being represented. Usually when you see queer culture, that’s not what you’re seeing.”

Casper Pride Weekend isn’t the only plan postponed. The start of work toward Casper Pride’s long-term goal to open a local LGBTQ resource center has also been delayed by the pandemic, Pollock said.

Casper Pride started as part of PFLAG’s effort in 2016 to expand its Pride Month event and in 2018 developed into separate a entity and nonprofit. The organization along with other groups have grown the local celebration into last year’s five days of events.

Now, Casper Pride is beginning to look beyond the June celebration to offer a presence the rest of the year, Pollock said.

Plans are still in the vision stage for a future center, a yearslong project. Casper Pride often receives requests ranging from people wanting to know what’s happening on weekends to finding a doctor. The hub could be a resource for information and host small events.

Casper Pride recently conducted focus groups with a market research company to gather insight into needs in the LGBTQ community. A consensus among the groups was that Casper Pride Weekend gives a sense of being part of something bigger and connects people outside their own circles with others they didn’t know were out there, Pollock said. That’s what inspires Casper Pride Weekend.

“But then that’s what makes us want to grow outside of that festival,” Pollock said, “is because there are so many more people to take care of and support and connect with and network with all the time, instead of just five days in June.”

Where: Natrona County Health Department, 475 S. Spruce St. Participants are asked to enter the parking lot from Midwest Avenue under the balloon arch.

A rainbow flag representing LGBTQ pride and a blue, pink and white flag representing transgender pride is reflected in a puddle as people wearing rainbow clothes arrive at Crossroads Adventure Park in Casper during last year's Pride in the Park event. This year's local Pride Month celebrations include Drive-Up Pride on Saturday at the Casper-Natrona County Health Department parking lot.

Framed by colorful balloons, Sami Saunders wears a rainbow flag as a cape while she holds up a smaller flag representing LGBTQ pride during last year's Pride in the Park at Crossroads Adventure Park in Casper.