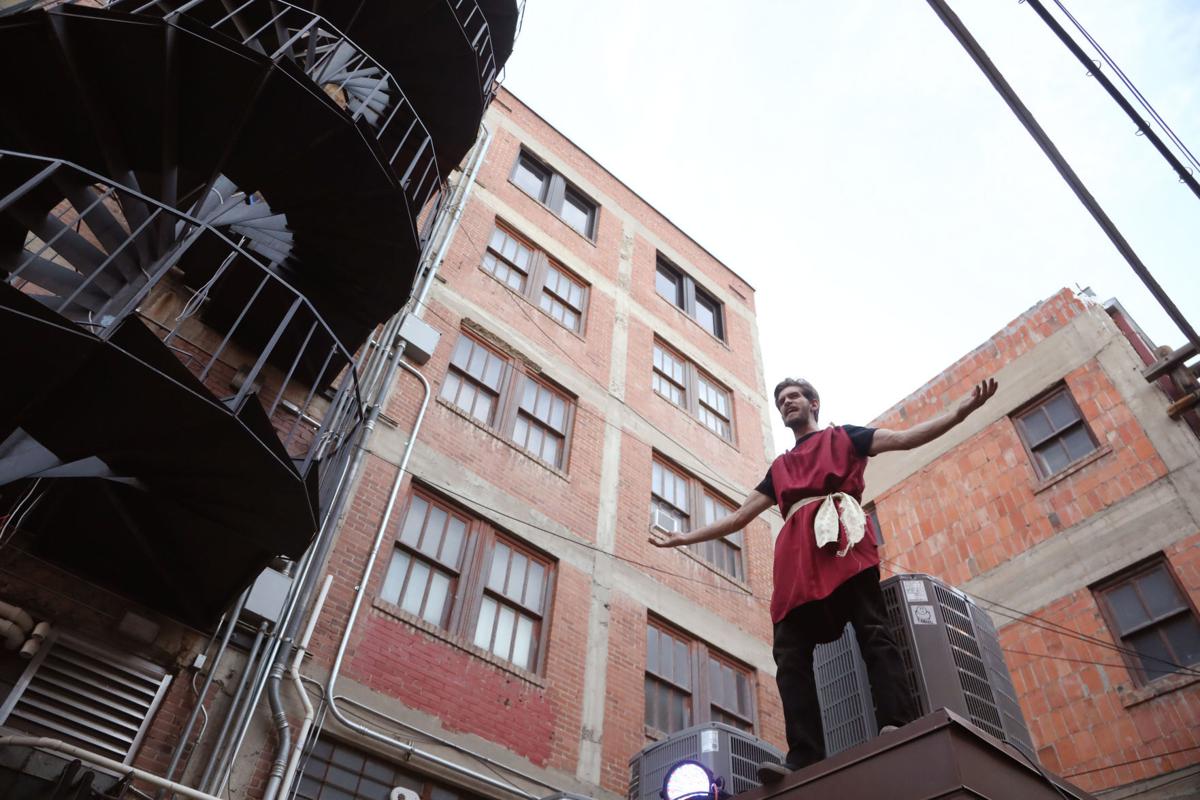 Theatre of the Poor's Samuel McCarty as Creon rehearses "Oedipus Tyrannos" at the spiral staircase behind the Wolcott Galleria in Casper on Monday. 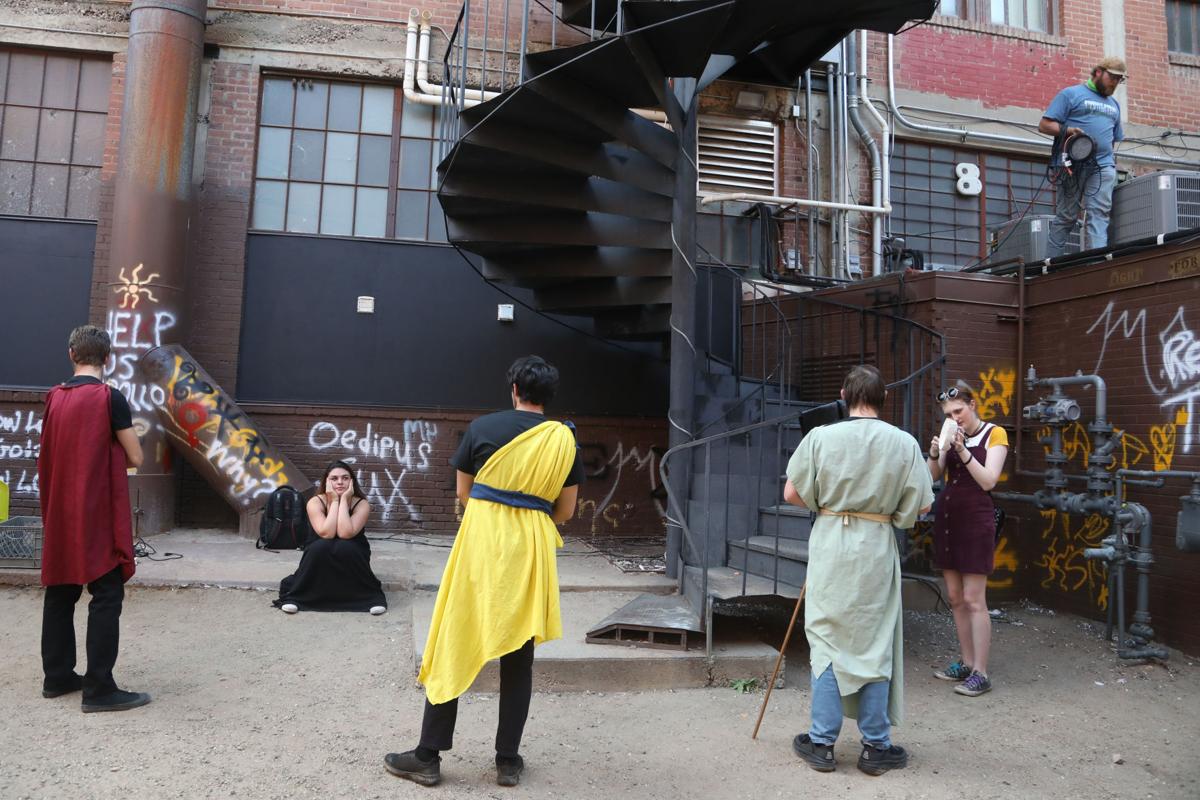 The cast of Theatre of the Poor's "Oedipus Tyrannos" run through a dress rehearsal of the play at the staircase behind the Wolcott Galleria in Casper on Monday.

William Conte has three words for the inspiration behind the Theatre of the Poor‘s “Oedipus Tyrannos” production.

“Theater is essential,” he said.

The play opens Thursday in at downtown Casper’s “Staircase to Heaven” in the alley behind the Wolcott Galleria.

Against the backdrop of a graffitied alley set, the cast of seven will perform Conte’s original blank verse adaptation that he wrote from a 19th century translation of the 425 B.C. Greek tragedy by Sophocles.

Conte preserved the original story set during a plague, but overlays ancient Thebes with modern Casper in a show that ties into current pandemic.

“And in this particular rendition, the chorus speaks very loudly about the confusion regarding the nature of the plague, why it’s happening to them, the government’s response to it,” Conte said. “They’re suffering the seeming pointless rituals that they have to go through in order to find relief, and no one seems to be helping them. Another aspect of this is the masking issue in our society, it’s very, very contentious right now. And it’s causing a crisis in the theater, in the entertainment industry, because right now protocols are being established in the industry that will prevent us from rehearsing and performing in the way that has been traditional for the last 2,500 years.”

Conte ties all his shows back to what’s going on in the world today; to him theater is most meaningful when it’s a direct response.

“And I didn’t really want to make this so much about the virus as I wanted to make it about personal choice and the nature of free will and the problem of fate and destiny, which is what was originally explored in this play when it was written for, you know, in 425 B.C.,” he said. “And I think those ideas are those universal concepts continue to remain important today, as each of us has to come to terms with the kind of personal choices we’re going to make at this time, just as Oedipus has to make certain choices in response to what he knows to be or what he thinks to be fate.”

The chorus representing the Thebans at times will do anything to avoid infection. By the end, they’re disgusted after they see what happens to Oedipus and realize that everything is a matter of fate.

Masks in the production denote characters as the actors switch from chorus roles to speaking parts.

“And so there’s a lot of interesting, ironic byplay that’s going on as the chorus complains about having to wear masks to protect themselves from the plague that the gods send,” Conte said, “but also the fact that in ancient Greece and in the conventions of the Greek theatre, the actors would have been masked.”

During the third choral ode, the chorus angrily tears off the face coverings in an act of protest.

“And part of why I’m doing this production is because I feel that at this stage and with what’s going on in the theater world, in the world of the performing arts, that doing theater is an act of resistance,” he said.

The theater industry is being reinvented with the old way less of an option with audiences socially distanced and actors in face coverings, he said.

“And the effect and the impact that that’s going to have on the theater is — no one can calculate,” he said. “But I believe that as we begin to push more into livestreaming and present audiences with the opportunities to stay home and watch livestreamed versions of theater, we don’t have a theater anymore. In order for the theater to be the theater, people have to be able to gather, and the actors have to be able to confront the audience. and the audience needs to be present for the actors. Otherwise, we have eviscerated a 2,500-year-old art form.”

This production is more than a commentary, but an act of resistance, Conte said in his director’s note.

He sees a new normal developing changing how theaters rehearse, perform and deliver content through in ways that morphs theater into a new art form, “devoid of the immediacy and humanity that makes Theatre what it is,” he said in the note.

Virtual platforms can’t match the energy the audience receives from the actors and vice versa, he said.

“We are bleeding the humanity of the theater, and if the Theatre of the Poor is worth anything at all, it’s in restoring, preserving that sense of humanity,” he wrote. “We get it right down to the act of the human person interacting with each other on stage and transacting with the audience in the only way possible, and that’s in person. And if we take that away, we don’t have a theater anymore.”

The play raises issues not in a way that tells people what to do or conclude, but invites them to confront the issue and challenge themselves, he said.

Nicholas Johnson portrays the servant in the play and is the executive producer who helps with directing, lighting design, costume design and construction and other tasks.

Others have taken on multiple tasks, including cast members who have composed music for the show from Conte’s lyrics in the script, he said.

All of the cast worked on the set to turn the alley into the world with graffiti words and images as they also use features of the space, like the spiral staircase that becomes the palace and holy place of Jocasta and Oedipus, Johnson said.

With the building owners’ permission, they spray painted alley walls with images and words that bring in symbolism and lines in the show, like “Help us Apollo,” “Reopen Thebes,” “Oedipus sucks” and ”Fight for truth.”

“It’s really amazing too, just how much love everyone has of the theater and how we’ve all come together to take paint the set, to work on the music, to choreograph and help out one another when we need it — kind of keeping the theater alive as its own little family within the family,” he said.

The small group present a timely show, he said.

“And it’s very interesting, that you know, at a time when no one’s really doing theater, we’re choosing to do one of the very first shows ever written and performed in the history of the universe, and how relevant and timely it is to right in our situation, you know, thousands of years (later),” Johnson said.

He’s using skills he learned at Casper College and is looking to continue his education, but he may wait a whole year because college programs he’s looked at will take place online and through video conferencing.

“Theater is such a live performance,” he said. “And I really love the fact that we take something so flat on a page with just words and turn it into a 3D and almost 4D sculpture with lighting and fog and just those elements. I really don’t want to see it die or get changed throughout the years.”

Where: "Staircase to Heaven" in the alley behind the Wolcott Galleria downtown

Theatre of the Poor's Samuel McCarty as Creon rehearses "Oedipus Tyrannos" at the spiral staircase behind the Wolcott Galleria in Casper on Monday.

The cast of Theatre of the Poor's "Oedipus Tyrannos" run through a dress rehearsal of the play at the staircase behind the Wolcott Galleria in Casper on Monday.