The class sat hunched over, brows furrowed, drawing gingerly on chicken eggs. Sometimes, their hands slipped, causing the tiny canvases to roll across the table.

As they worked, the students were audience to a lesson on Ukrainian history and culture.

First, it’s “Ukraine,” not “the Ukraine”, explained their teacher. The latter dates back to its time as a Soviet state. But Ukraine has been the country’s official name since it gained independence in 1991.

“I always wondered why I wanted to say ‘the Ukraine,’” one student chimed in.

Russia invaded the country Feb. 24. Russian forces have fire upon many Ukrainian cities, especially along its eastern border. More than 3 million people have fled the country.

Ukrainian independence is at the heart of the conflict. Russia says it has a right to police Ukraine because it claims the two countries share one heritage.

But Ukraine and other former Soviet republics each have unique cultures and histories, said McDonald.

“All these places are different,” she said. Pysanky are her way of showing it.

This week, McDonald is hosting pysanky workshops at ART 321 in Casper to raise money for Ukraine, and help people understand more about the ongoing invasion.

Two final classes take place Sunday, the first at 2 p.m. and the second at 5.

Proceeds from the workshops will go toward humanitarian relief efforts in Ukraine led by Caritas, the charity arm of the Catholic Church. Visit Art 321’s website for more information.

There are two main steps to making pysanky, said McDonald: writing designs on eggs with beeswax, and dunking them in dye. The wax keeps the dye out, like a reverse stencil, protecting what’s underneath.

“You kind of have to think backwards,” said McDonald.

Ukrainians use specialized tools called kistka — essentially, a small funnel with a handle — like wax pens.

Beeswax goes into the funnel, then gets melted over candle flame. It has to be real beeswax, she said. The artificial stuff won’t stick to eggshells.

The melted wax gently drizzles out of the other end, onto the eggs, almost like a hot glue gun.

Traditionally, pysanky are decorated with symbols of nature and harvest — like flowers, animals, baskets, crosses and stars — to usher in good fortune.

But they don’t all have to be serious. One of the pysanky McDonald brought to a workshop Tuesday had Darth Vader on it — one of her sons’ creations.

The art form is easy and cheap enough that anyone can do it, McDonald said. Many Ukrainian families, including hers, make pysanky together every year. Kids join in on the fun from an early age.

“You sit with the little ones on your lap, and you hold the kistka with them, and you draw on the egg with them,” McDonald said.

They get together, tap on their eggs, and recite a special saying: “tap, tap, tap — who’s going to have the best year?” Whoever’s egg cracks first loses, McDonald said.

Gifting pysanky eggs is also a big part of the tradition. McDonald plans to make one for each of her grandchildren every year until they turn 18.

“I put the date on the bottom, and so they can look back to those and remember the good times they had with their Baba Lisa,” she said.

At first, some weren’t buying it. One student spoke regretfully of her wobbly line-work. But those worries went away when she saw the finished product: orange swirls and dots, yellow spikes, red spikes and a flower on top.

“She was looking at it going, ‘Oh, really? That’s my egg?’” McDonald said.

At the very end, there’s only one thing left to do: get the white and yolk out.

The easiest method is making a tiny hole in the bottom, and sucking it out with a syringe. The old-fashioned way works too, McDonald said. Traditionally, Ukrainians would make two holes, one on either end, and blow the eggs out with their mouths.

Pysanky are fragile, but can last for generations if taken care of properly.

For a time, Ukrainians couldn’t make them at all. It was seen as a religious ritual, and the Soviet Union was an atheist regime.

But the Soviets could not stomp out the tradition during their years in power. Now, some Ukrainians see the art form as a sign of resistance as they fight to preserve their independence. Sharing the tradition, McDonald said, helps keep the culture alive.

Ukrainian immigrants in other countries — like McDonald’s family, which settled in Canada — helped keep the tradition alive. Now, she’s doing the same. 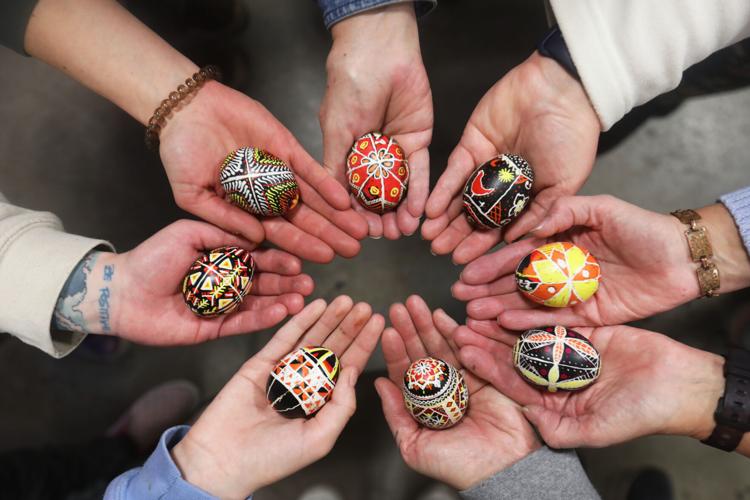 Participants in Lisa McDonald's workshop on pysanka, a traditional Ukrainian Easter egg, show off their designs on on Wednesday at Art 321 in Casper. McDonald, who is a Casper citizen of Ukrainian decent, shared her culture and history with the group and donated all the money made at the four workshops to humanitarian relief in Ukraine. 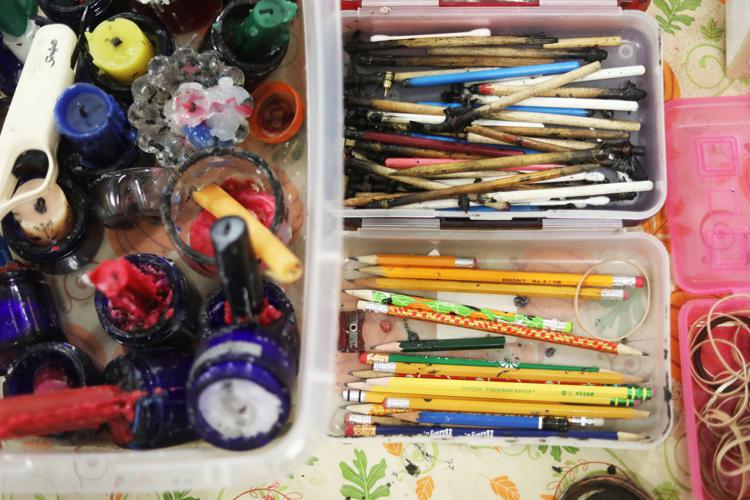 To make a pysanka you need a clean white egg, a kistka or writing tool, dyes, beeswax and a candle. Though fragile, pysanka can last for generations if handled properly. 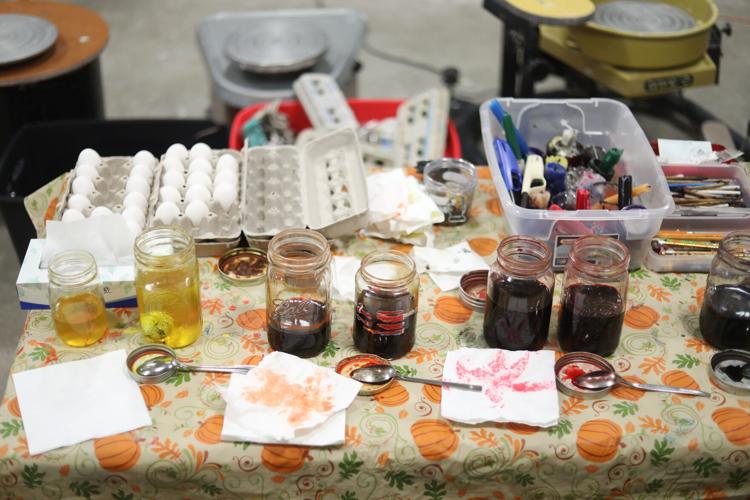 To make a pysanka you need a clean white egg, a kistka or writing tool, dyes, beeswax and a candle. Lisa McDonald, who is a Casper citizen of Ukrainian decent, shared her culture and history with the group and donated all the money made at the four workshops to humanitarian relief in Ukraine.