Become a Member
Read Today's E-edition
Share This
The art of healing: People affected by suicide find comfort in art sessions at local nonprofit
0 Comments
Share this
1 of 5 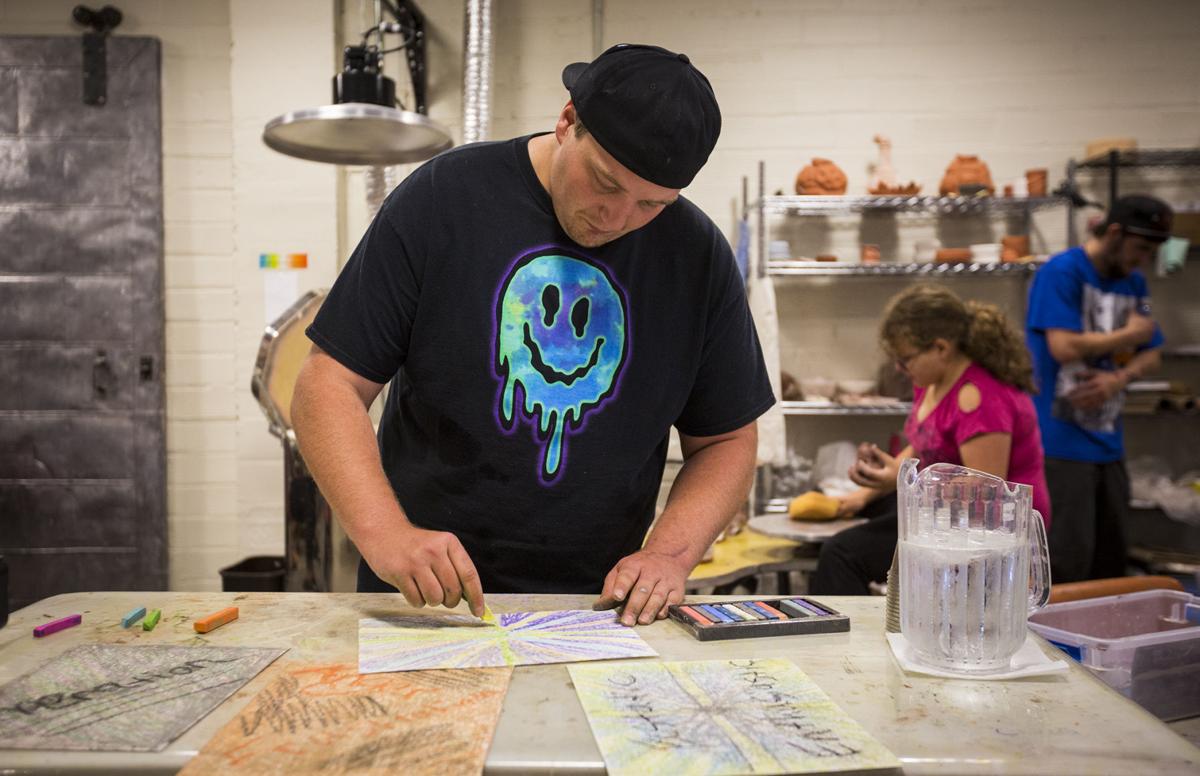 Recovering addict Brad Davis works on a series of pastel drawings during the Healing through Art event at Art 321 Tuesday, Aug. 8. Davis described each piece as “emotions I’m trying to move on from.” 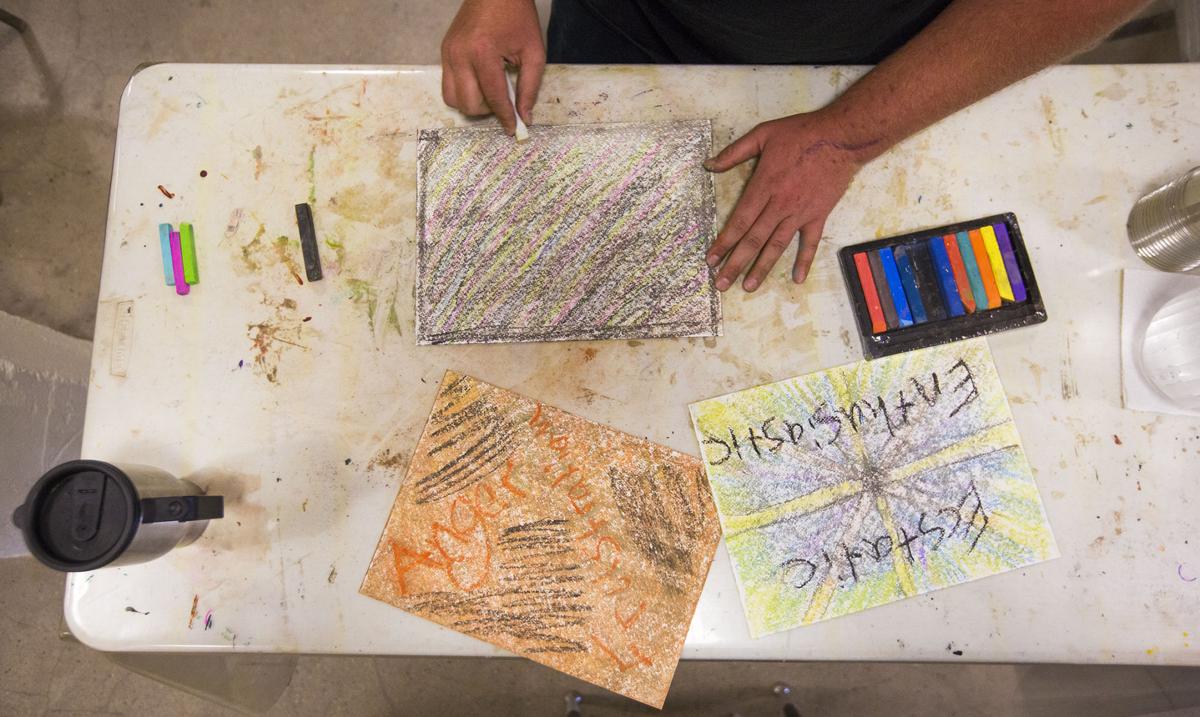 Recovering addict Brad Davis works on a pastel drawing for “Separation,” one piece in a series of drawings he did during the Healing through Art event at Art 321 Tuesday, Aug. 8. 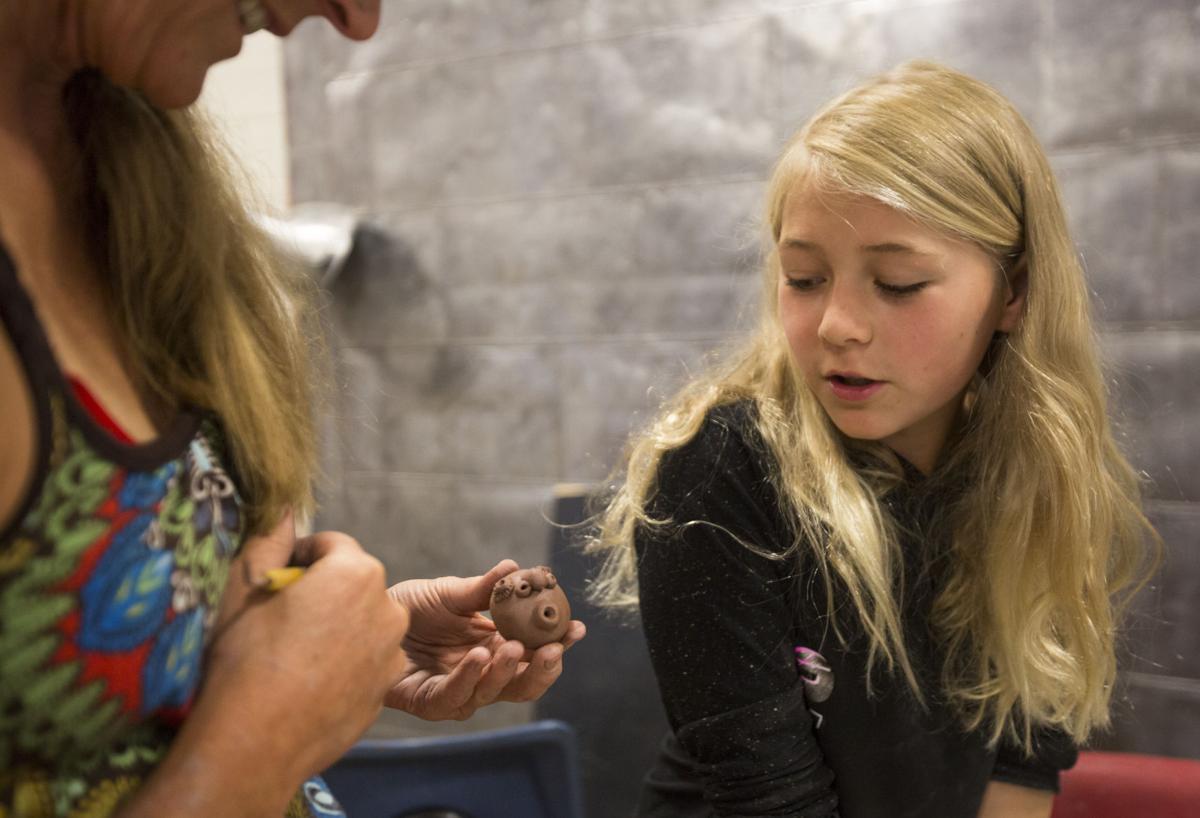 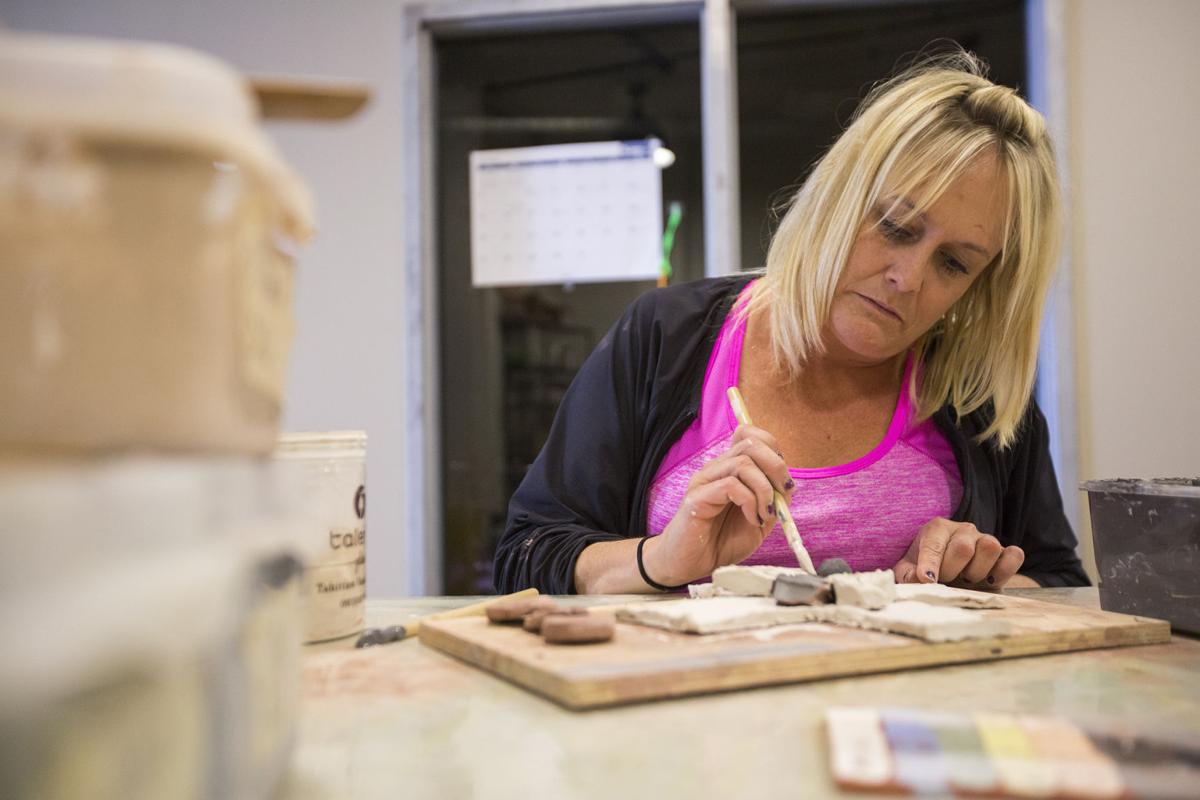 Heidi Olson works on finishes a wall hanging of a cross she made during Healing Through Art at Art 321 Tuesday, Aug. 8, 2017. 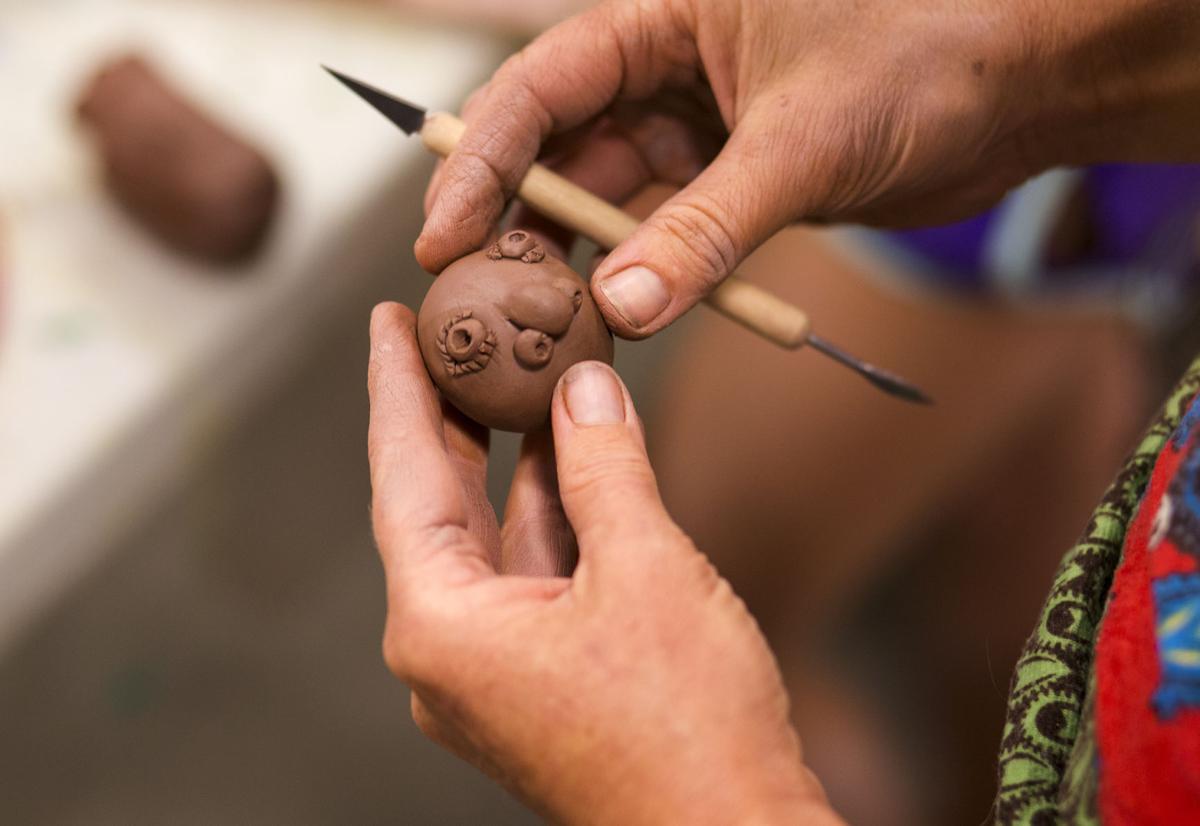 Brad Davis leaned over the box of pastels and asked what colors go with anger.

Two women sculpting clay nearby suggested red, orange and maybe yellow. The fiery-colored pastels rasped across his sketching paper as Davis set to work. Others drew with pencils, crayons and charcoal at tables in the studio at Art 321 earlier this month. A few spun clay mounds into pots at a pottery wheel.

People filled the art studio for the nonprofit's Healing through Art sessions, which are open to anyone affected by suicide or other mental health issues. People dropped in for the free, two-hour sessions on Tuesday mornings throughout August, ART 321 director Diane Harrop said. All the supplies were provided and art experts were on hand to answer questions and help people get started.

Participants' artwork can be displayed in next month's "Suicide: Healing through Art" exhibition, meant to showcase how art contributes to the healing process and allows people to express inner turmoils. The art center is also taking submissions from the public for artwork inspired by suicide, depression and other mental health issues.

The sessions and show are a new collaboration between ART 321, the Natrona County Suicide Prevention Taskforce and local mental health care providers.

“Even for people that don't think of themselves as artistic or artists, it's very well-proven that that art has healing powers,” Harrop said.

Dee Lundberg invited participants try any art materials that appealed to them as she launched the first Healing through Art studio session this month.

“We just want you to come in and play,” she said. Water pitchers and cups waited on the tables, along with a bin of crayons, stacks of paper, boxes of colored pencils, paints, pastels, coloring book pages and printouts of mask shapes. Lundberg handed mounds of clay to some participants. Art is a way to express and work out feelings and thoughts, she told the group.

“Having said that, making a coffee mug, just to have a coffee mug, is therapeutic,” she said. “That’s why I’m here. I found out that when I was here, I didn’t think about anything else. Just playing with the clay is important.”

As a member of the Casper-Natrona County Suicide Prevention Task Force, a licensed therapist and reverend of the United Church of Christ, she’s always seeking ways to prevent suicide and raise awareness about the issue in the community.

She was up to her elbows in clay at ART 321, where she'd begun ceramics studio sessions, when the idea for the art sessions and upcoming show came to her, she said. She started chatting with a staff member at the gallery about how the art is a relaxing escape for her.

The idea took off with support from ART 321, mental health professionals and suicide prevention groups including the task force.

Talking about suicide is crucial to preventing it, Lundberg said, though too many people are afraid to bring up “the S-word.”  Suicide impacts everyone in the community and open conversations about it are crucial to reducing the stigma of mental health issues and to help those who are at risk, Lundberg said.

“People have to make it their business,” she said.

An attitude of toughness prevalent in Wyoming and the West has long been thought to contribute to the high suicide rates, Lundberg said. Wyoming had the fourth-highest rate of deaths by suicide in the country in 2014, the most recent year for which nationwide data is available, according to the Centers for Disease Control and Prevention.

The sessions and the show are a way for people to express struggles with suicide, whether they’ve experienced suicidal ideation, survived an attempt or know other survivors or those who died by suicide.

“It’s part of opening up that conversation in a whole new way,” Lundberg said.

She encourages anyone to submit pieces on the subject of suicide to the show, and hopes to include pieces inspired by hope, she said.

Lundberg is considering contributing to the show as well, with inspiration from her experiences that include addiction, recovery and then facing her issues with depression, she said.

“I’ve got some concepts in my mind of how that would look for me,” Lundberg said. “Kind of sifting through 56 years of moving from a place of hopelessness to hope.”

Taking on the positive

Casper artist Alicia Lynne walked around the studio admiring artworks and helping with projects as she guided a session earlier this month.

One participant, Heidi Olson, was ready to paint a clay piece depicting an angel on a cross that she’d started the week before.

Lynne stirred a few containers of a liquid clay, called slip, used to paint ceramic pieces before they’re fired in the kiln. Olson brushed the white substance onto the angel’s wings.

“It’s just like an angel has been watching me and been at my side, through all the things I’ve been through in my life,” she said.

She’d won awards for art in high school, but it had been many years since she’d created a piece. She came with a friend that day to try the sessions, and plans to keep exploring her creative side in more ART 321 groups.

“It was soothing,” Olson said. “It’s something I think anybody could benefit from.”

More than a dozen people attended each of the first two Healing through Art sessions this month. Local artists worked alongside participants and answered questions. Conversations around the tables ranged from movies to the artwork they were creating.

Nikki Underwood sculpted a daisy with clay, because flowers are peaceful, she said.

“I have a hard time expressing my emotions, so when I do something like this, it makes it easier,” she said. “I think it’s easier to express your emotions through art sometimes.”

She’d always enjoyed art, but felt uncertain about how to start that day. She's recently been working on using on the law of attraction — focusing on positive thoughts to bring more positive happenings in her life, she said.

As she guided the session, Lynne talked about theories she's studied and explored about how art transfers emotions into what someone creates. The act of creating art is a healing release in itself, she said. Connecting with others while creating with other artists or like-minded people can also aid healing, and sometimes people also find it easier to say what's on their mind while they're doing something else, like drawing, painting or sculpting.

“Art is another way to build those connections,” Lynne said.

Davis’ pastels continued scratching colors across another sheet of paper, multicolored pastel dust and smudges covered the table and his fingers. Jagged black lines separated the words “Anger” and “Frustration” in dark letters. Blue, green and orange lines spread from a central point. He finished his last artwork of the day with the words “family,” and “togetherness.”

He's recovering from addiction, he said, and arrived that day with doubts about gaining benefits from art, he said. He thought the idea was a little silly, but he showed up anyway, he said.

At the end of the session, he arranged his four artworks into one square to see them all together.  It's a reminder about how he used to be and feel and how he wants to move toward more positive emotions, he said, tapping the pieces with the words "ecstatic," “enthusiastic,” "family" and "togetherness."

“It was definitely therapeutic,” Davis said. “I feel better about moving on. It’s leaving the bad behind and taking on the positive.”

ART 321 hosts art sessions open to anyone affected by suicide and other mental health issues.

Participants are invited to have their art displayed in the "Suicide: Healing through Art" exhibition in September.

ART 321 also is taking submissions for “artwork inspired by suicide, depression and other mental health issues."

The entry deadline is Aug. 29.

Jordan Cobb walked along the riverside path chatting with her husband, friends and family. White signs posted along the path offered facts and…

Cessor’s experience includes his previous job at the Wyoming Arts Council in Cheyenne working with organizations around the state, roles on various state boards and councils and a creative background as a saxophonist and artist.

Watch Now: A look back at Dolly Parton's iconic career

Kristen Stewart on Britney Spears's 2007 meltdown: "I can't believe I have not done the same thing"

Kristen Stewart on Britney Spears's 2007 meltdown: "I can't believe I have not done the same thing"

Recovering addict Brad Davis works on a series of pastel drawings during the Healing through Art event at Art 321 Tuesday, Aug. 8. Davis described each piece as “emotions I’m trying to move on from.”

Recovering addict Brad Davis works on a pastel drawing for “Separation,” one piece in a series of drawings he did during the Healing through Art event at Art 321 Tuesday, Aug. 8.

Heidi Olson works on finishes a wall hanging of a cross she made during Healing Through Art at Art 321 Tuesday, Aug. 8, 2017.