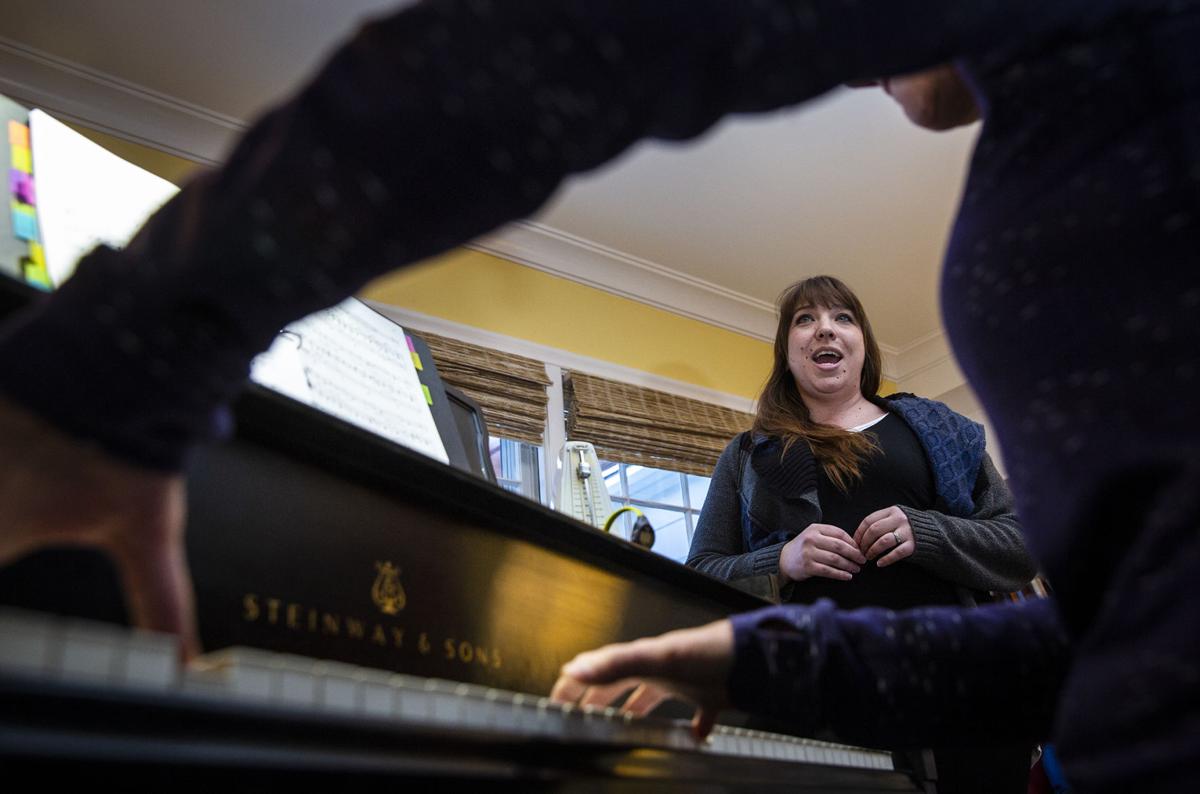 Emily Quintana, singer and executive director of Opera Wyoming, practices a song for the show "Shakespeare Goes to the Opera" last year. Opera Wyoming joins many art groups and organizations around Wyoming in offering online and planned in-person offerings. 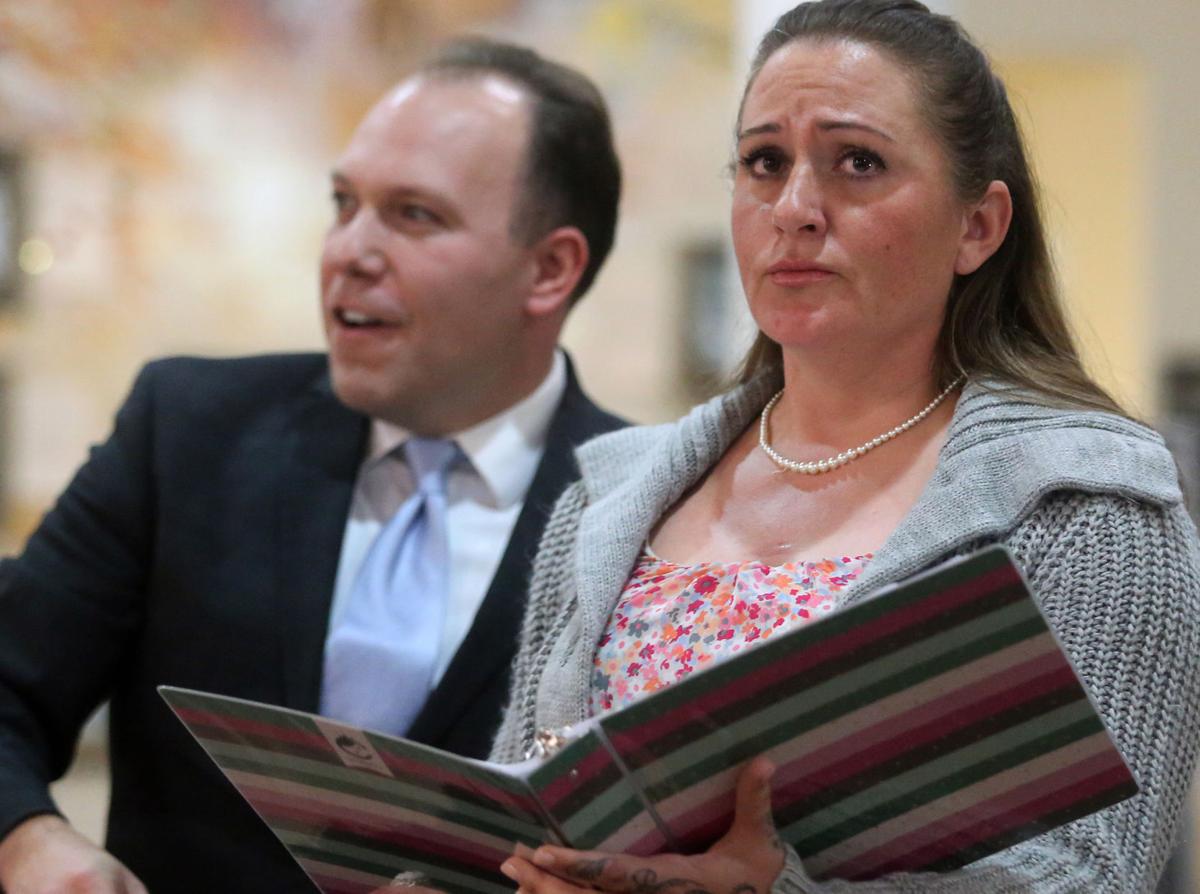 Opera Wyoming members Andrea Sipe, right, and Daniel Quintana perform in 2018 at Meadow Wind Assisted Living. The company is among arts groups, organizations and museums planning both virtual and in-person offerings after moving to digital shows during closures amid the pandemic.

Audiences in recent months had little option but to take in performances and visual art online during event cancellations and closures of museums and galleries.

Many Wyoming arts organizations plan to continue investing in such virtual offerings as their venues, stages and galleries reopen in the era of social distancing and uncertainty about future lockdowns.

Virtual shows can be an alternative to attending shows in person and a backup in case of future closures and cancellations. Some plan to use the technology for multimedia shows to avoid large groups on stage or partner with others from afar.

Some plan to keep some of their virtual adaptations even after the pandemic, as several artists and groups discussed the topic of blending virtual and in-person arts last week during the Wyoming Arts Alliance’s weekly video conference.

One guest speaker in the video call was Anne Mason of Relative Theatrics in Laramie, who described the many virtual shows the company has produced during the pandemic. She’s found the virtual offerings aren’t the same as in-person theater.

“But one of the things that has been successful for me is just recognizing that it can’t be the same, and that’s OK,” she said.

The group discussed how the virtual realm has opened new possibilities to connect, as it changes art and even introduces new art forms through the technology.

“And we have an opportunity to expand our programming, to broaden our reach, to bring our work not only the citizens of Laramie, but also to everyone in the state, around the country and even globally around the world.”

Relative Theatrics has produced many online theatrical shows during the pandemic, including eight weekly virtual plays that featured talks with playwrights from around the country and worked in partnerships including with the University of Wyoming, the Center for Hellenic Studies at Harvard and Out of Chaos Theatre in the U.K.

They’ve continued to experiment with virtual platforms, like involving audience members beyond the chat box in Zoom by inviting them to appear on screen.

Mason was so busy with online offerings that she hired a part-time director of virtual programming.

The company plans to return to live theater with its upcoming season opener slated for September at the Gryphon Theatre in Laramie. How many people they can seat depends on restrictions subject to change. Cancellations because of the pandemic remain possible, and many may not yet feel comfortable coming to the theater, Mason said.

The upcoming season fortunately features a lineup of plays the company helped develop through its new play festival, which means they can work with playwrights or publishing houses for possible online options.

“We’re in direct contact with all of the playwrights, which is fantastic, because then we could go to them and say, ‘How do you feel about filming this?’ or ‘Here are the various options that we have in order to be able to offer the production in this hybrid way of both live or for viewers at home,” Mason said.

The group plans to rehearse and perform at the theater as well as film and edit the takes into a “filmed theater” style available for ticket holders to watch online. The videos will provide an in-theater viewing experience that’s different from the Zoom readings with actors in their homes.

Mason sees much potential in virtual platforms for Relative Theatrics to continue to grow partnerships with more companies as well as for Wyoming theater companies across the state to collaborate with one another.

“I think that that’s something that not only can but should continue into the future.”

Opera Wyoming is another performance company that plans a hybrid of virtual and live productions.

The company launched “Friday Night Soirees” in May after its season finale’s run was cut short by the pandemic.

They plan to take the soirees into the theater with monthly cabaret nights they’ll livestream to offer both options to both locals and audiences that have tuned in from as far as the East Coast, co-founder of the nonprofit Daniel Quintana said.

During closures, the group offered online shows by sending videos of themselves singing at home to Quintana, who used iMovie to create a streamlined show he broadcast on various online platforms.

He as the host started each show by introducing the performances, and the company interacted with the viewers through comments on Facebook.

“That’s the interesting thing about this new livestreaming, is that we can interact with the audience members that we haven’t been able to do in the past, obviously, live,” Quintana said.

The company plans to prerecord group songs in a similar way and project the videos during in-person concerts so they can still include groups singing without compromising safety. They plan the multimedia approach for an upcoming show in celebration of women’s suffrage for the anniversary of the 19th Amendment.

Quintana had no idea how to livestream or put together a quality video before the pandemic.

“But when you’re quarantined for a pandemic and where you can go is very limited, you start working on other skill sets,” he said.

They’re also producing programs for school districts to replace their educational offerings on hold because of the pandemic.

“And then we think we can reach the whole state that way instead of just Casper, which is all we’ve been able to do so far,” co-founder Emily Quintana said. “So we’re excited about that.”

The group plans to up their game with better recording for livestreaming when they resume live shows.

“But it is it’s going to be an investment. It has to be something we can continue to do after all of this is over.”

Good production quality is necessary to capture sound for opera, offer performances worthy of ticket prices and continue offering their performances in times of caution.

“We’ve talked to people who the risk is just too high for them to come back to a live performance,” she said. “And if we can give them a high-quality performance where they can still be involved with us and still feel like a part of our family — because that’s what they are — we want to do that. We want to have them still feel like they’re with us.”

The Cheyenne Symphony Orchestra is another group that was unable finish its previous concert season and took to online offerings. Their “Virtual Virtuoso” premieres a video on Facebook at 7 p.m. Tuesdays, each featuring a different symphony musician.

It’s long been a goal of the symphony to help audiences get to know the musicians and their expertise, Lindsey Bird Reynolds, the symphony’s executive director, said on the video conference. They’ve tried receptions and musicians speaking at the beginning of concerts.

“And nothing really connected with the audience in the way that this has,” she said.

The videos combine Zoom interviews about their background and training with a performance they record at home. Some highlights from the series have included a national touring violinist and previous guest soloist with the symphony, Michael Ludwig. Another week featured trombonist Daniel Watt, who shot video of himself playing all the parts of a seven-part trombone choir in different shirts which he compiled.

The symphony plans to livestream its Mahler and Beethoven live concert postponed from last season to Aug. 8 at the Cheyenne Civic Center and the entire upcoming season starting in October.

The streams offer a way to see the show for those who can’t get a ticket because of limited seating, don’t want to attend in person or in case the event is canceled.

“Our hope is that at the very least we could present a livestream of the concert even if we can’t have a live audience, which is not ideal,” Reynolds said. “But we do also feel in addition to the obligation to our patrons to provide these performances, we have an obligation to our players. This is how they make their living. We really want to do everything we can to continue to have those opportunities for them to perform.”

Visual arts venues around Wyoming have brought their programs online during the pandemic, including the University of Wyoming Art Museum.

The museum, closed since March, has offered a host of events online, including talks with curators, livestreamed yoga sessions and a new virtual summer camp for kids through Zoom.

The museum didn’t focus much on virtual offerings until March, when they “radically pivoted,” said Katie Christensen, UW Art Museum Curator of Education and Statewide Engagement. The museum plans more virtual programming, even after it reopens.

Its symposium in the fall will be in conjunction with the “Moving Walls” exhibition, which documents through photographs the barracks at Heart Mountain during its time as an internment camp and structures becoming part of the Homesteader Act in Wyoming.

The event will include both in-person and online programs with plans to feature most of the artists video-conferencing from their homes.

“Without knowing what the future holds,” Christensen said, “we just decided it would be safer to plan a hybrid version.”

The company also created an audio recording of “War of the Worlds” on Zoom that aired on a local radio station, executive artistic director Macey Mott said. She edited the recording with sound effects.

They’re currently working on a production of a virtual puppet show “Macbeth” that will appear online. The theater plans a live upcoming play season starting this fall at the Center for the Arts and plans to offer a livestream option for each show.

Mott has thought about creating smaller projects between main productions, even after the pandemic.

The “War of the Worlds” production received a great response, while play reading series didn’t draw as large an audience.

“However, it was really important for the actors who were involved just to be able to look forward to a weekly thing, where we could still be creative in that theater realm and also see each other,” Mott said. “That was really helpful for mental health and staying in touch with our theater community.”

Artcore's 42nd season features local to international performing acts along with precautions and technology to help people easily keep up with any show changes.

Emily Quintana, singer and executive director of Opera Wyoming, practices a song for the show "Shakespeare Goes to the Opera" last year. Opera Wyoming joins many art groups and organizations around Wyoming in offering online and planned in-person offerings.

Opera Wyoming members Andrea Sipe, right, and Daniel Quintana perform in 2018 at Meadow Wind Assisted Living. The company is among arts groups, organizations and museums planning both virtual and in-person offerings after moving to digital shows during closures amid the pandemic.