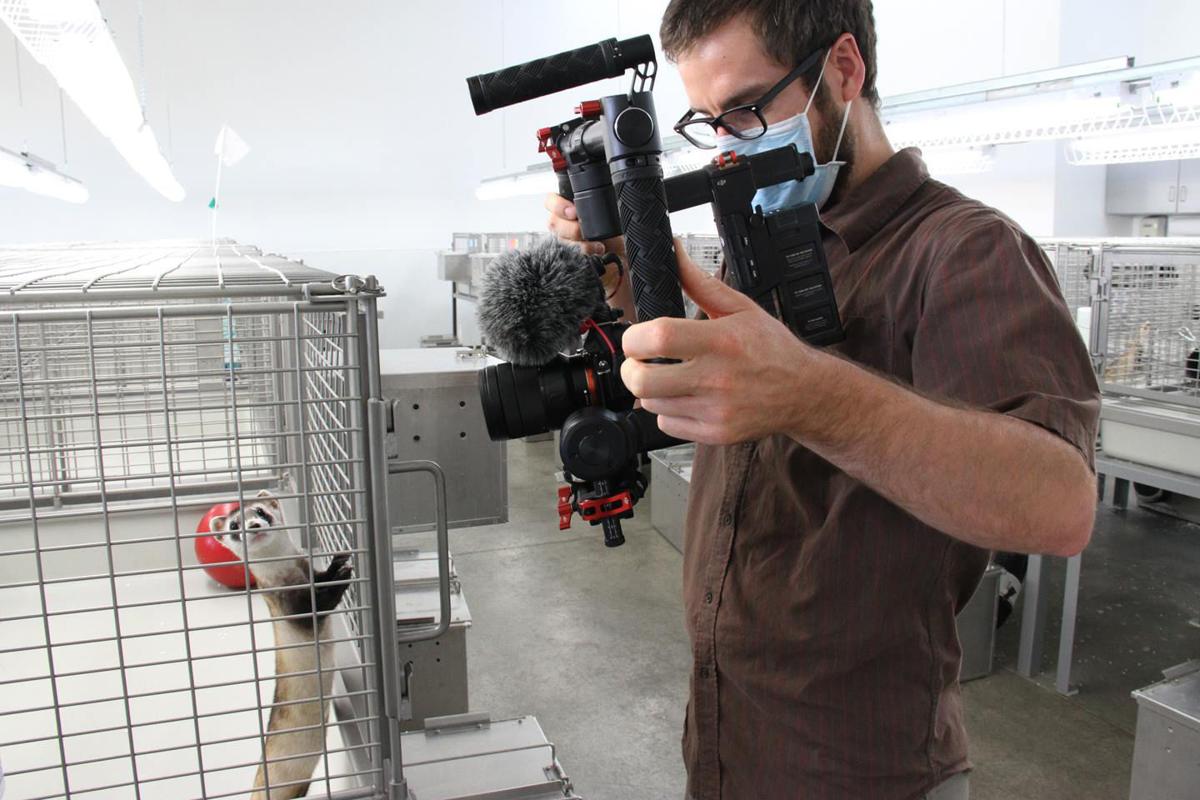 Kyle Duba works as director of photography for "Ferret Town," one of Lander-based Caldera Productions' two documentaries nominated for an Emmy Award from the Heartland Chapter of the National Academy of Television Arts and Sciences. The awards will be announced July 25. 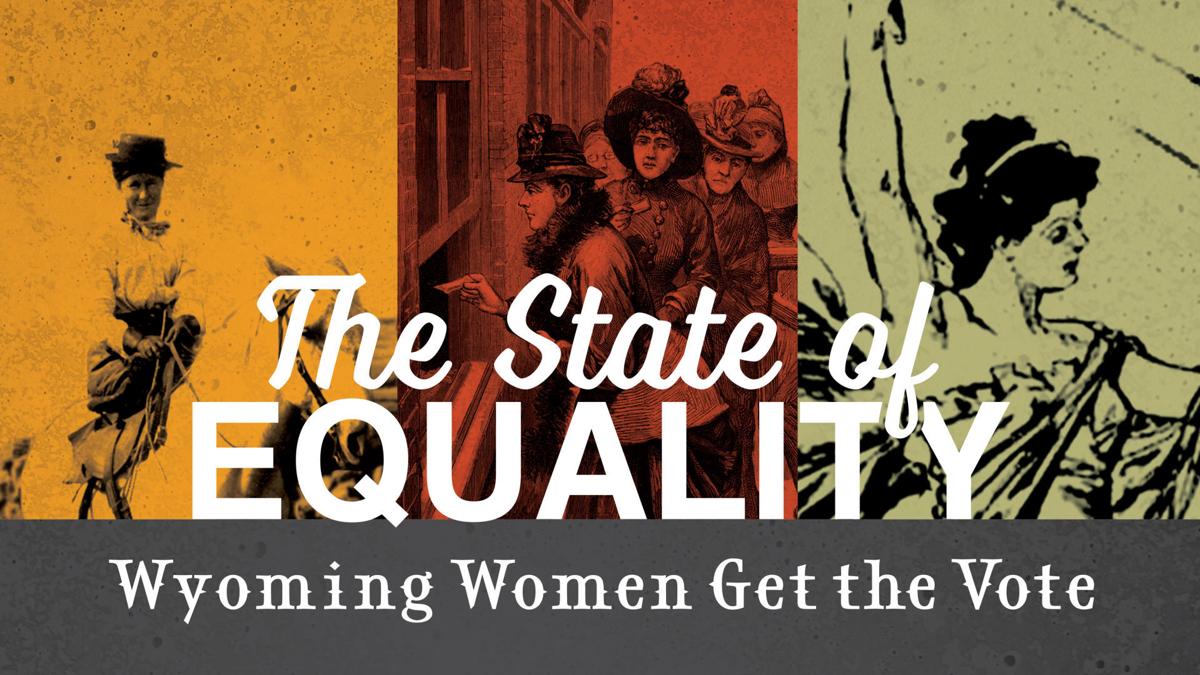 “The State of Equality" is one of five films nominated for an Emmy Award in best historical documentary from the Heartland Chapter of the National Academy of Television Arts and Sciences. The film is a co-production with Lander-based Caldera Productions and Wyoming PBS based in Riverton.

Four members of the Lander-based Caldera Productions documentary film company packed into a small room for about three days for the final edits of “The State of Equality.”

“Oh man, it was brutal,” co-producer Sophie Barksdale said. “We sat ourselves in a room, we all had a computer on our laps, cups of tea — a lot of tea; it’s what got us through.”

The entire project team from the start worked under an intense deadline to complete the film about Wyoming’s history as the first to adopt women’s suffrage in time to premiere at last year’s 150th anniversary celebration of the territorial legislature allowing women to vote.

The film now is in the running for an Emmy Award from the Heartland Chapter of the National Academy of Television Arts and Sciences in the best historical documentary category. Caldera is up for another top regional Emmy with documentary short “Ferret Town” nominated for best environmental program or feature, and University of Wyoming associate professor Anne Guzzo is nominated for best musical composition and arrangement for “The State of Equality.”

The awards for the Heartland region, which includes Wyoming, Colorado, Kansas, Oklahoma and Nebraska, will be announced July 25. Information about the livestream Heartland Emmy Awards Gala will be announced, according to the Heartland Chapter of the National Academy of Television Arts and Sciences website. “The State of Equality” also re-airs at 7 p.m. July 7 on Wyoming PBS.

“The State of Equality,” a co-production with Wyoming PBS written and directed by Caldera president Geoff O’Gara was an effort by many people, Barksdale said.

“I just feel so grateful to be a part of it, I think is really the overarching feeling with this Emmy nomination and really grateful to the other people who’ve been involved,” she said. “It’s been such a team effort.”

A mother told Barksdale that her 12-year-old daughter saw “The State of Equality” at the Lander library and found the courage to stand up to her grandfather who’d said she can’t do things like lift a bale of hay because she’s a girl. Then she completed a school history project on women’s suffrage.

With about a year and a half to complete the film, the team knew “The State of Equality” timeline would have to be much shorter than usual for an hourlong documentary, Barksdale said. For comparison, the company has been working since 2016 on its next release this fall. Final edits were far from the only long days. Team members would brave fierce Wyoming wind for footage, and Barksdale and O’Gara would meet director of photography Kyle Nicholoff of Wyoming PBS in Riverton to spend many hours in a tiny, dark room not seeing the light of day, she said.

But she’d do it all again because of stories like that of the girl in Lander.

“It just makes it all worthwhile to hear that impact and to know that this story is getting out there and it’s having an effect on young women today,” Barksdale said.

They included as many women as they could in the creation of the film, including many female researchers, consultants and others, Barksdale said. Another rewarding part for Barksdale was meeting many of today’s accomplished Wyoming female leaders featured in the film who serve as role models for other women, like Wyoming’s first female supreme court justice Marilyn Kite, former Wyoming Secretary of State Kathy Karpan and state lawmakers Affie Ellis, Andi Clifford and Cathy Connolly — also a UW gender and women’s studies professor.

“And it was just so important to have women’s perspectives reflecting on women’s history,” Barksdale said. “That just felt crucial. And then having women working on this film and making sure our crew, our intern was a woman. It just feels like more than any other film, this is where it’s important to make that happen.”

UW history professor Renee Laegreid in the film describes a great start for Wyoming in women’s rights and how the state elected the first female governor in the U.S., Nellie Tayloe Ross, in the 1920s but not yet a second one, Caldera owner and co-producer of the film O’Gara said.

She and others in the film discuss Wyoming’s history in women’s rights but also ask the question, “What are we doing now?” he said.

O’Gara is proud of the work the small Caldera staff and others on the project accomplished under the tight deadline for “The State of Equality.”

“And so everybody was just pedal to the metal all the way,” he said.

The documentary short “Ferret Town” about black-footed ferrets’ “precarious fight for survival amidst the prairie dog towns near Meteetsee” has been awarded eight official selections at film festivals in the U.S. and Canada this year and 2019, according to a Caldera news release.

Virginia Moore of Caldera directed the documentary with Kyle Duba as director of photography to tell the story of a species thought extinct until they were discovered in the tiny Wyoming town. A highlight is some “amazing footage” in a rare shot of a ferret dancing at night, O’Gara said.

Caldera’s nominations vie among the top five in their respective categories for Heartland Emmys, said Rose Steller Burke, outreach & media for Caldera. She was among the staff who worked closely on final edits for “State of Equality” and helped with research and collection of archival material.

She hopes for the awards for “Ferret Town” and for “The State of Equality” during the especially fitting timing of the 100th anniversary year of women’s suffrage in the U.S. this year, she said.

“I mean, we were thrilled,” Steller Burke said. “It is an incredible honor I think especially in the documentary category. There’s a tremendous amount of competition.”

Find out more about “The State of Equality” and “Ferret Town” at calderaproductions.com and ferrettownmovie.com.

Find out more about the livestream Heartland Emmy Awards Gala on July 25 and 2020 awards at emmyawards.tv/awards

There’s no new Pixar movie this summer, so here are 7 of the best to rewatch

This is the first summer since 2015 that we aren’t getting a new Pixar film.

What's coming and going from Netflix in July 2020

'The Umbrella Academy,' 'Cursed,' 'Down to Earth with Zac Efron' and more titles arrive this month.

'Gone with the Wind' returns to HBO Max — with a disclaimer

HBO pulled the film classic "Gone with the Wind" from its new streaming service two weeks ago in the wake of national protests against racism and deaths of African Americans at the hands of police. At the time HBO said it needed to add "historical context."

See the powerful performances from the BET Awards

Movies in a Minute: 'Irresistible'

Movies in a Minute: 'Irresistible'

Kyle Duba works as director of photography for "Ferret Town," one of Lander-based Caldera Productions' two documentaries nominated for an Emmy Award from the Heartland Chapter of the National Academy of Television Arts and Sciences. The awards will be announced July 25.

“The State of Equality" is one of five films nominated for an Emmy Award in best historical documentary from the Heartland Chapter of the National Academy of Television Arts and Sciences. The film is a co-production with Lander-based Caldera Productions and Wyoming PBS based in Riverton.