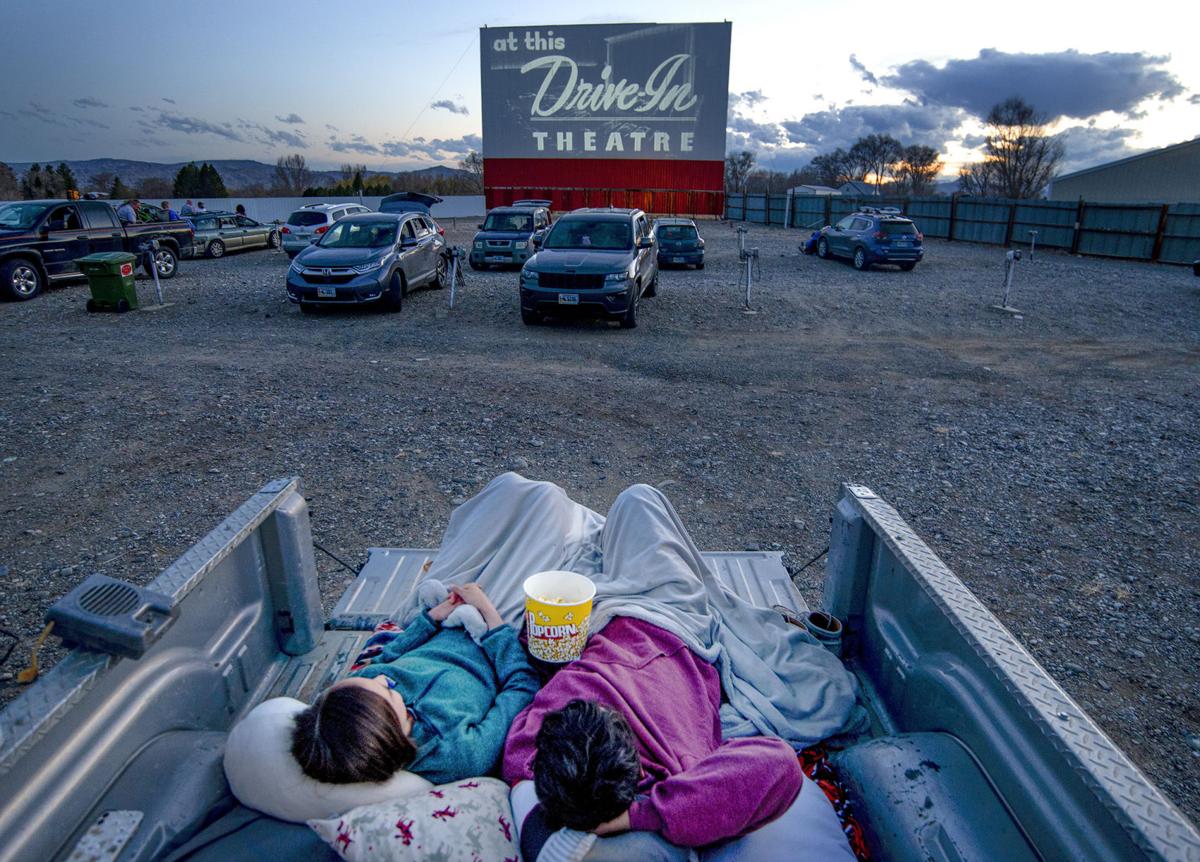 Carlos Garcia and Lillian Edwards get comfortable in the back of a pickup during a recent showing at Powell's American Dream Drive-In. 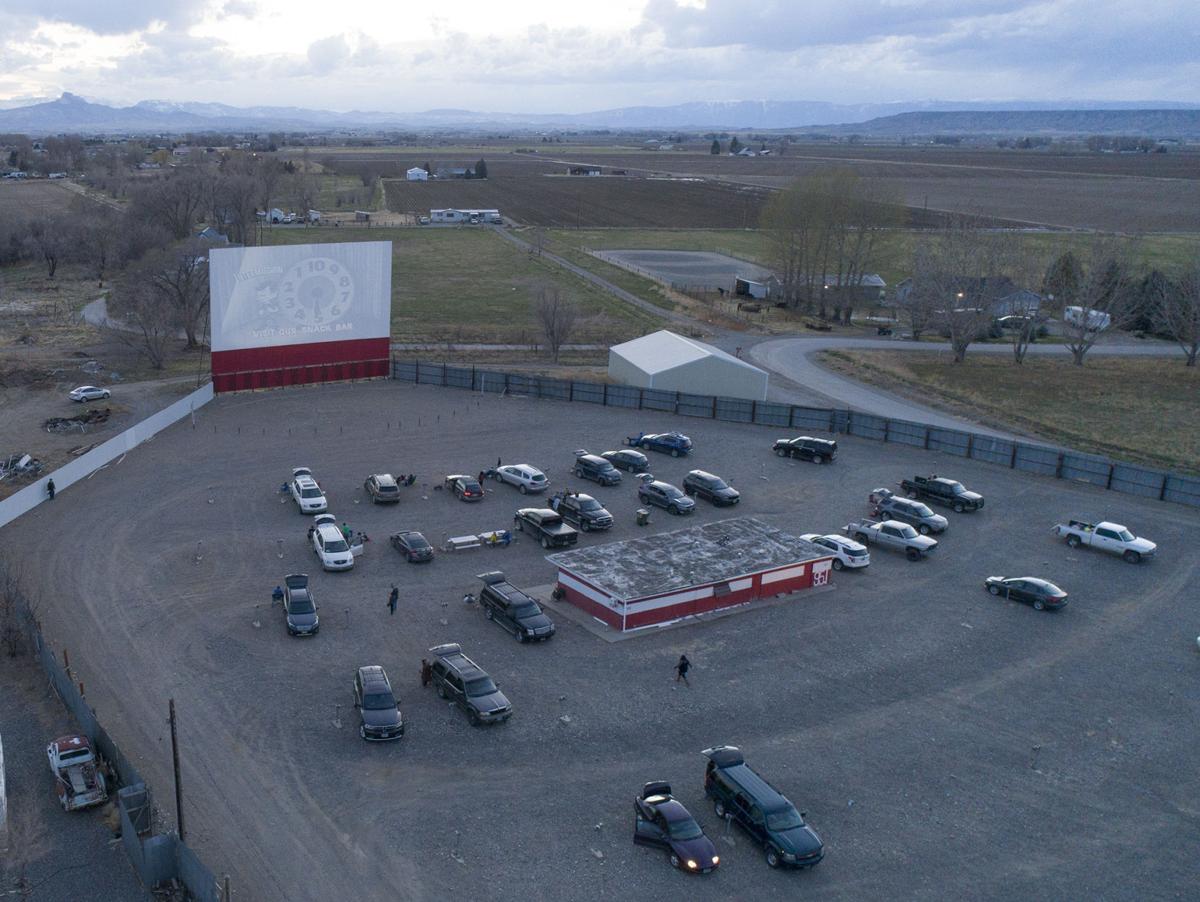 She never knows what surprises are in store as she prepares to open the doors to customers each spring. After dealing with running a business during the pandemic last year, Heny was hoping for an easy start for the 2021 season’s soft opening.

Yet finding her business burglarized and vandalized — and facing dark clouds and a coming storm — still seemed mild somehow, especially compared to the panic the world felt this time last year. Many businesses were shut down, residents and workers remained locked in their homes and many worried about the deadly virus spreading through communities.

For Heny, though, 2020 was a different experience.

Customers quickly lined up to reserve Heny’s American Dream Drive-in — Wyoming’s only outdoor movie theater. The spacious venue was one of the few businesses with the ability to remain open and, at the same time, socially distanced.

It wasn’t popular just for the chance to get out and see a movie. Heny was approached by a wide variety of businesses, groups and churches — all hoping to use the large space equipped with communication equipment to reach students, clients or their flock as they struggled to deal with the virus.

“Business was gangbusters,” Heny said. “Everyone found out we’re a safe outdoor facility with sound and video. It just took off.”

Business was booming and The American Dream hadn’t even opened to show movies yet. When Heny and her crew opened the season with a showing of Trolls World Tour, “we were slammed,” she said. “We had a line of cars all the way to town.”

To get permission to open, Heny had to make changes. The snack bar couldn’t open and the movie industry was closed with no plan in place to release new movies. No studios wanted to release a movie while indoor theaters were closed.

“Their numbers would have tanked. It would’ve looked like that movie was a failure,” she said. “So they didn’t really release anything. Trolls was the last release before it all hit. Then we had to go back into the archives.”

“I would’ve loved to show something new,” Heny said. “But there wasn’t anything.”

Despite showing nothing but “classics,” people kept coming. The chance to safely get out of the house was more important than what was showing on the large screen.

By the time the drive-in closed for the season, Heny had her busiest year ever. Profits would have been higher if she wasn’t so generous; she went out of her way to help new customers, sometimes charging less than the cost of electricity to run the facility.

When the lights went out and the movie finally started on a recent Saturday night, the smell of burgers and freshly popped corn wafted through open car windows and past those finding comfort in truck beds and on lawn furniture. The several dogs in the audience settled in, wrapped in blankets close to their packs for the start of “School of Rock.”

The movie was free, sponsored by the Afterschool Alliance. They weren’t there to raise money. Instead, the idea was to simply showcase groups like the Boy Scouts, Big Brothers Big Sisters, the Park County Library and other youth groups, said Tiffany Wutzke, Youth Clubs of Park County’s director of programming and training and ambassador for the Wyoming Afterschool Alliance. Wutzke chose the movie for the event from the archives.

“We’re an after-school program. It’s not sitting in your desk and learning. It’s outside the box learning — like making music,” she explained.

Many in attendance dressed in their pajamas for the event. It brought back memories of moms making a big, greasy paper sack of popcorn and all the kids playing catch or tag before the movies, Heny said.

“I always remember wanting the theater popcorn instead. And the pickle on a stick,” she said. “I’ve kind of kept that memory (of frugal mom) alive and I tried to keep everything affordable. And I brought back pickles on a stick.”

Some folks park out front of the theater, opting to buy dinner but passing on the movie.

Locals occasionally will stop by just to buy popcorn, she said.

“They’re busy and it’s hard for them to get to the movie. They just swing by — sometimes with their own bowl,” she said. “I fill their bowl and off they go.”

Jake and Melissa Craft bring their two children, Kaden and Kaison, to the drive-in often. The couple remembers when there was a drive-in theater in Cody and enjoy sharing the experience with their family.

“To see our kids experience the same thing is pretty cool,” Jake said.

“What’s not to love?” Melissa said. “They get to stay up late and have candy to eat.”

Later this month, the American Dream Drive-in will open to the general public and new movies will once again be shown.

Heny replaced the stereo equipment that was stolen over the winter, invested in new security equipment and as she looked out over the small crowd settling in for the main feature, she discussed the many new titles arriving soon.

“Isn’t it everyone’s American dream to own a drive-in?” she said. “Not very many people can own a piece of Americana; movies, cars, station wagons, kids in jammies, popcorn. Come on!”

Heny bought the theater on a whim — to ensure the tradition lived on in Powell. She had no experience, only learning the lessons of the business the hard way. She’s constantly worried the screen will blow over in a storm, but said after enduring last year, she’s just happy to be able to open her doors again.

Then, almost on cue, dark clouds once again formed in the west. Strong gusts of wind sent dust flying and those enjoying the outdoors experience, scrambling for cover before the rain came.

“You never know when you get here what the weather’s gonna be like,” Jake Craft said. “Regardless, we couldn’t have asked for a better day.”

Billie Eilish: People don't know anything about me

Billie Eilish: People don't know anything about me

Demi Lovato reveals what led to their 2018 overdose

Demi Lovato reveals what led to their 2018 overdose

Elizabeth Olsen has secretly been married for months

Elizabeth Olsen has secretly been married for months

'In the Heights,' 'The Fast & Furious' franchise, and worst final films, all on the latest 'Just to Be Nominated' podcast!

The hosts of the 'Just to Be Nominated' podcast talk 'In the Heights,' recommend films that 'Fast & Furious' heads would love, take a dip into entertainment news, and more!

Blink and you missed some info about Loki.

Carlos Garcia and Lillian Edwards get comfortable in the back of a pickup during a recent showing at Powell's American Dream Drive-In.