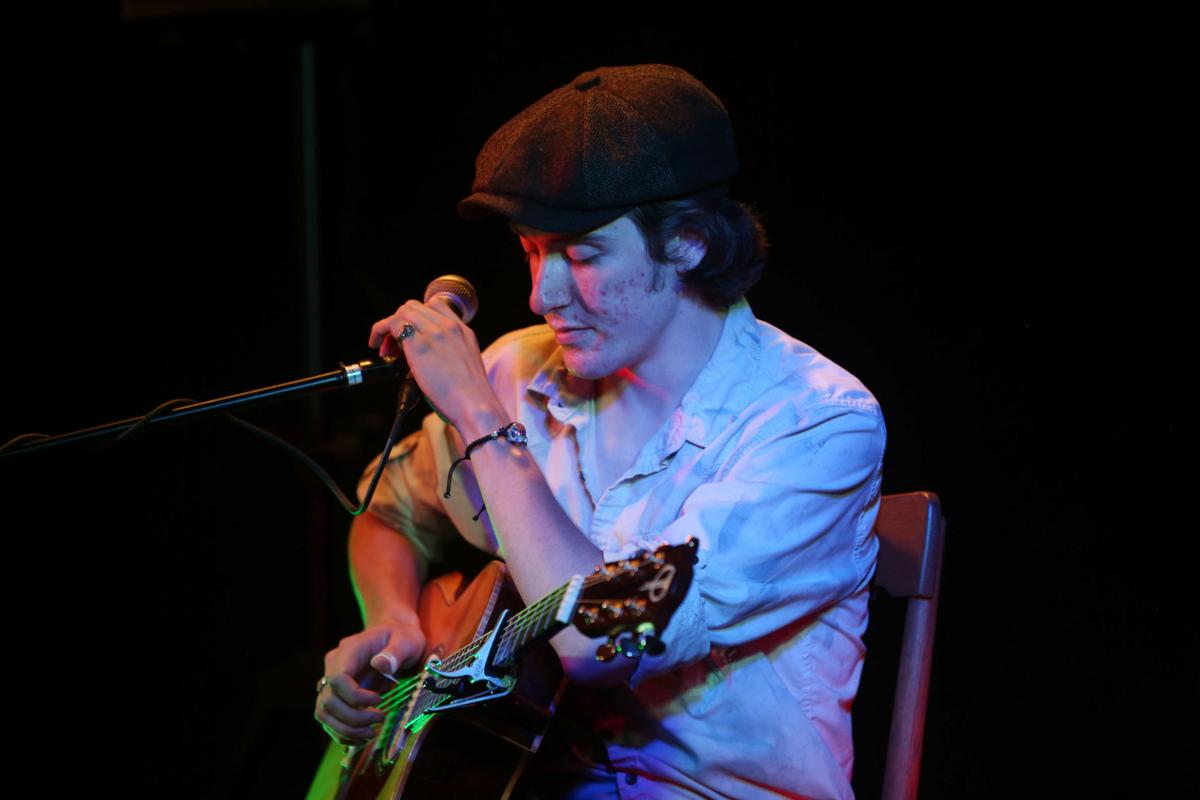 Quinlan Valdez freestyles on his guitar at the start of his set July 27 for Artcore’s Music and Poetry Series at the Downtown Grill & Venue in Casper. The Casper-grown singer-songwriter considered the show to be a milestone in his music career, which was first inspired in grade school when he watched Jalan Crossland perform through Artcore. 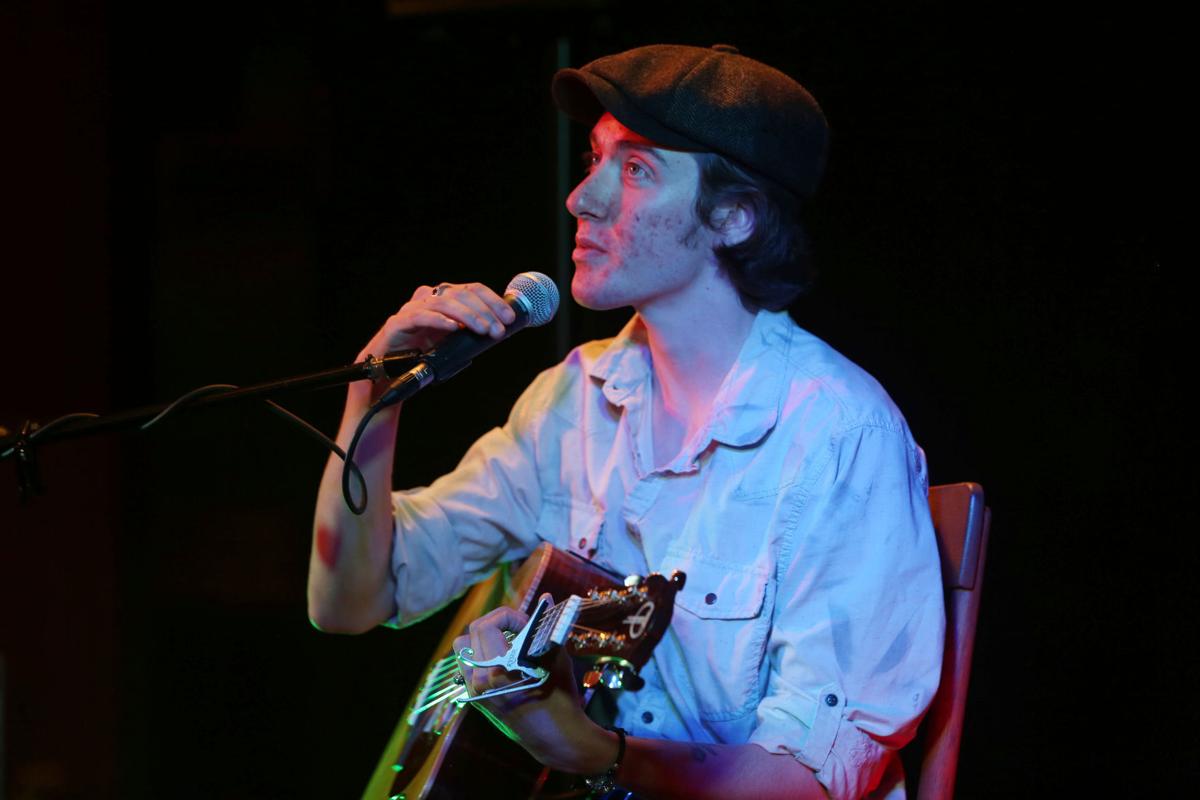 Local musician Quinlan Valdez performs an original song during his set July 27 in Artcore’s Music and Poetry Series at the Downtown Grill & Venue. The 19-year-old played his first gig three years ago in his hometown and now performs across Wyoming. 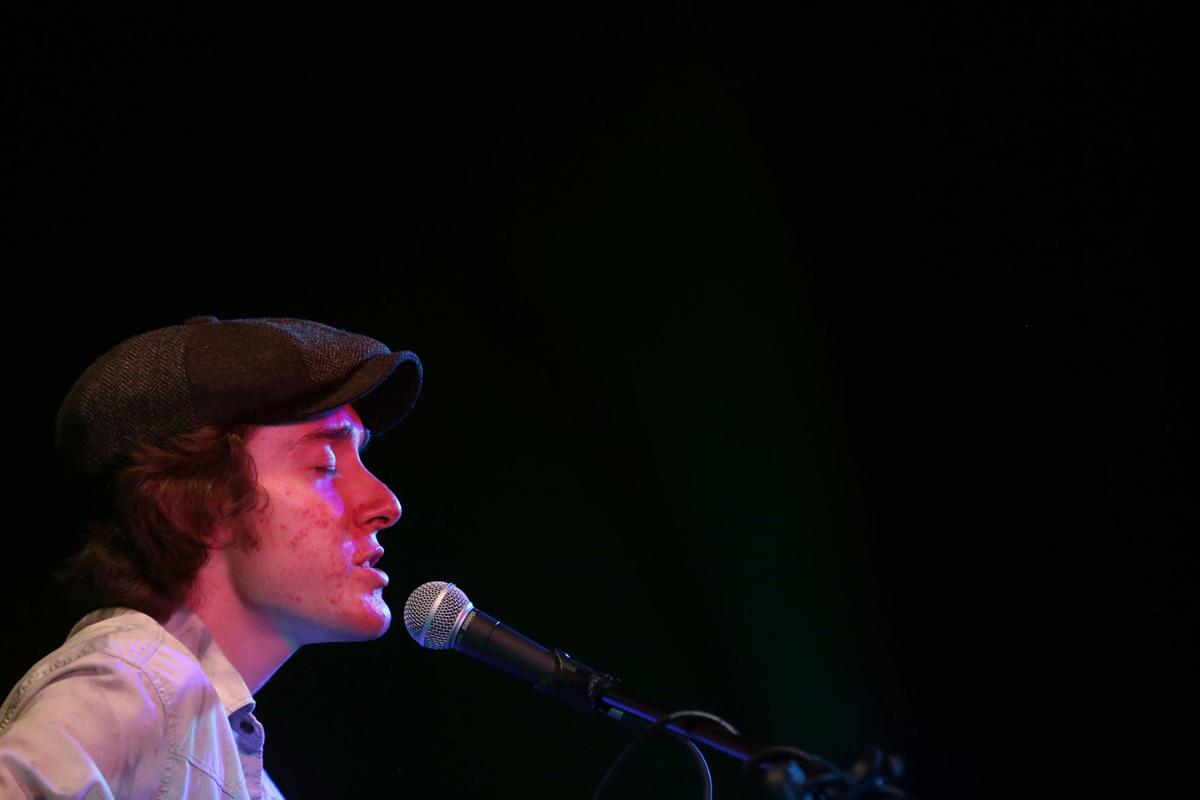 Casper singer-songwriter Quinlan Valdez sings an original song about love July 27 at the Downtown Grill & Venue. Valdez, who was inspired to pursue music by Jalan Crossland, will share a stage with Crossland at Saturday's Oil City Gumbo Cookoff.

He mainly watched the bass player he thought was playing an electric guitar — the only instruments you know at age 9 are drums, piano and electric guitar, he explained.

“It’s funny to look back. And it wasn’t until Jalan brought out his banjo and started playing his songs — “Spider in the Bathtub” — for everyone that I just was hooked,” he said.

A decade later, Casper native Valdez, 19, is set to open for Crossland on Saturday during the Oil City Gumbo Cookoff at the Central Wyoming Fairgrounds among his gigs around the state.

Crossland’s banjo playing captured Valdez’s full attention and inspired him to take up the instrument himself a few years later, which eventually led to him pursuing a life of songwriting and playing music.

“I’d say playing music feels like — it’s like I’m having a living instead of making a living,” Valdez said.

Valdez started learning banjo in 2014 at VIBES Fine & Performing Arts before he continued on his own, and he later taught himself to play guitar.

“I’ve never had real lessons, and then I just kept going from there,” Valdez said. “And now I’m being able to share shows with (Crossland) and do this for a living.”

Crossland remains an inspiration for Valdez.

“He doesn’t seem to hold anything back when it comes to him as a musician,” he said. “He just puts out who he is and is honest about it and I think that’s what gains him so much attention is just the liveliness and honesty.”

Valdez has gotten to know the Ten Sleep musician at his shows and shared the stage for the first time with Crossland at last year’s Oil City Gumbo Cookoff.

His first show was at Metro Coffee in Casper three years ago, and he’s since played in nearly every major town in the state. Valdez hopes to expand into gigs in Montana and Colorado. He holds to his own way of following his passion for music, though.

“I get told a lot to get a band together and make this really big album and go travel across the country or try to go to big places like Denver,” he said. “And it never appealed to me. I like playing solo all the time, but just getting to make a couple hundred bucks every night for just playing a little bit — that’s good enough for me. But of course it’s a career, so you want it to grow either way.”

He’s always taken his own path. Instead of going to high school, he took classes at Casper College where he completed all but two classes for an associate’s degree in history before he earned his GED and started booking his own gigs in town.

One of his best gigs was last month for Artcore’s Music and Poetry Series at the Downtown Grill & Venue. Crossland is an Artcore regular and the nonprofit organized the same student program where his performance inspired Valdez as a child.

Other Artcore acts have influenced him, including South Dakota folk musician Jami Lynn and Artcore staple Inda Eaton, from whom Valdez took a songwriting workshop four years ago.

“That was actually quite a milestone for me, because Artcore’s been my main source of influence,” Valdez said.

Nearly 20 shows on his schedule for spring and early summer were canceled because of the COVID-19 pandemic. But the time away gave him a chance to enjoy the small things in life and reflect on what music means to him.

“I never thought of the real purpose of it,” Valdez said. “It was just inspiring and fun, and it was making me learn things about myself. But when I was going back into it — because I hadn’t touched my guitar for almost a month — so when I picked it up and played, it felt very different. So I just had to start searching. It was like, ‘What does it really mean for me to do?’ And I haven’t found that yet. I have a feeling it’s going to be one of those things that you never find. But you know it’s there. And that’s enough for me to keep going.”

‘Go with the flow’

Valdez has evolved alongside his music, and his songs have always reflected who and where he is as a person.

“Mostly I just like to write about life instead of dreams or ideas,” he said.

As gigs took him outside Casper and along new adventures around the state, his songwriting turned to the discovery of new things.

“It kind of goes by each album I recorded,” Valdez said. “So my first one was about going through rough parts in life but then finding the bright things, whereas my second album is about almost looking for trouble, but just looking for new ways of life in the end. And the songs I’ve written now more take place in the present and just enjoying what you see and what you know right now.”

While he works hard at music, Valdez follows a “go with the flow” philosophy. He knows his career will grow if he just keeps at it, so he doesn’t spend his time looking for opportunities like festivals to play or media interviews. If he gives to full crowd, a person or a specific town, “life starts giving back in those little ways.”

“I’ve learned that all the best things come to you, or they know you’re going to find them,” Valdez said. “All the best songs I feel that I’ve written and all the best shows that happened, they all came to me. They reached out to me for the shows. I didn’t plan on writing the songs. It just kind of fell on my lap one day. And that’s been in music; that’s in almost everything in my life. So that’s probably something I’d share is just don’t go chasing things too hard, because eventually you’ll give yourself some karma and it’ll come back to you.”

Tickets & info: $10 admission, $5 for veterans with military I.D. and free for children 6 and younger. Find out more about the event, gumbo entry or vendor booth options at wyofcc.com/news-events/oil-city-gumbo-cookoff.html and the Oil City Gumbo Cookoff event page on Facebook.

For more about Quinlan Valdez and his upcoming shows, go to quinlanvaldezmusic.com

Twelve years ago, three men gathered around a fire in Jalan Crossland’s backyard in Ten Sleep and picked out tunes late into the night.

Jalan Crossland: Still at it after all these years

Jalan Crossland has been at it for a while now, picking guitar and banjo across the country and the world. But two decades on the road have do…

One of Wyoming’s most well-known bands played its last show this year. The Jalan Crossland Band called it quits in September amid drummer Pat …

The caravan rolls on: WYOmericana returns for a second Rocky Mountain tour

The Star-Tribune picks its favorite A&E events of 2013

We at Weekender Industries had a blast covering Wyoming arts and entertainment in 2013. Here are five of our favorite events from last year, i…

Watch Now: Vinyl records outsell CDs for the first time since the '80s

Watch Now: Vinyl records outsell CDs for the first time since the '80s

Quinlan Valdez freestyles on his guitar at the start of his set July 27 for Artcore’s Music and Poetry Series at the Downtown Grill & Venue in Casper. The Casper-grown singer-songwriter considered the show to be a milestone in his music career, which was first inspired in grade school when he watched Jalan Crossland perform through Artcore.

Local musician Quinlan Valdez performs an original song during his set July 27 in Artcore’s Music and Poetry Series at the Downtown Grill & Venue. The 19-year-old played his first gig three years ago in his hometown and now performs across Wyoming.

Casper singer-songwriter Quinlan Valdez sings an original song about love July 27 at the Downtown Grill & Venue. Valdez, who was inspired to pursue music by Jalan Crossland, will share a stage with Crossland at Saturday's Oil City Gumbo Cookoff.