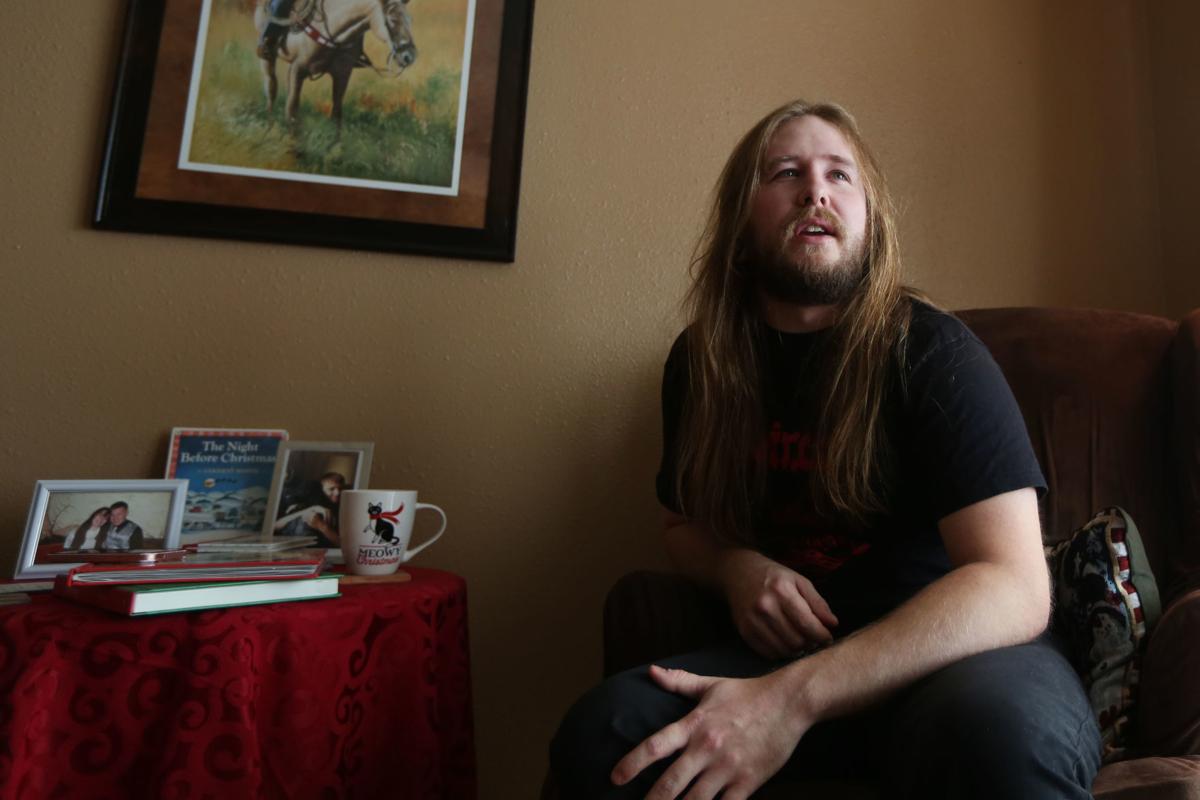 Alan Cassidy talks to his mother at his family home on Dec. 20 in Casper. Cassidy is a drummer for the metal band The Black Dahlia Murder. 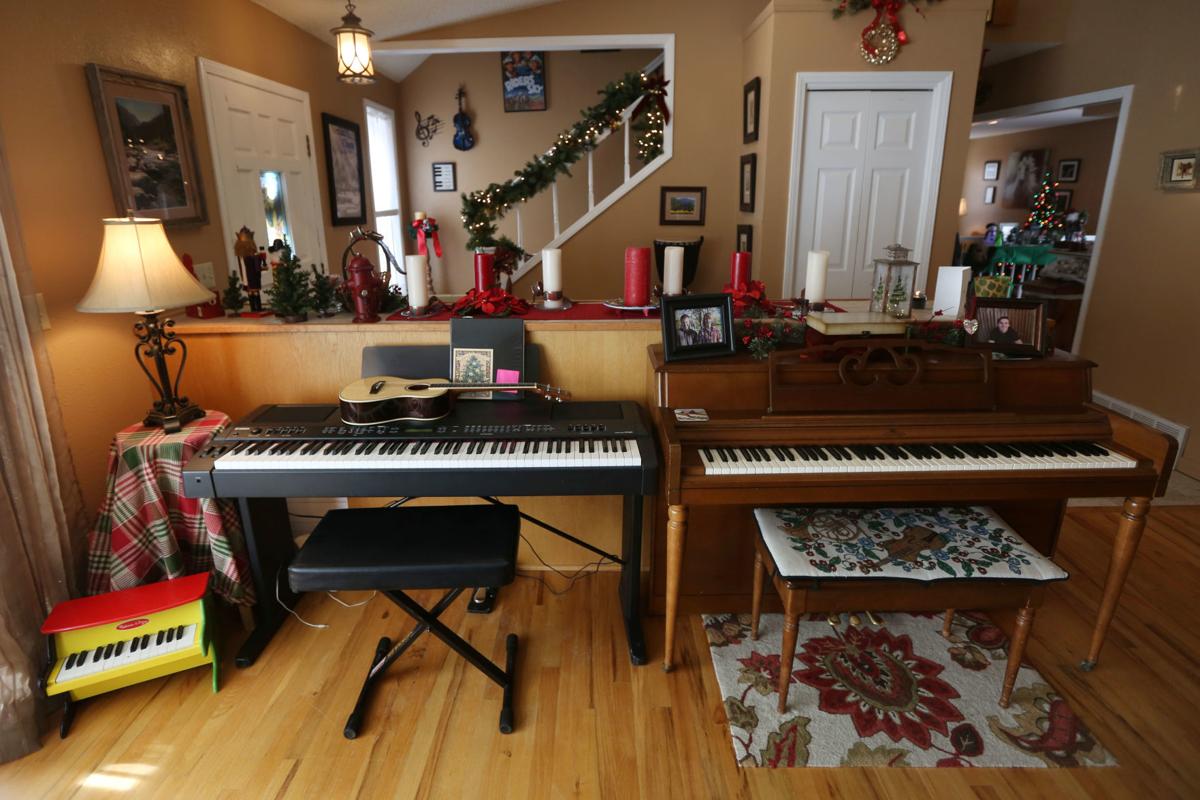 Inside the family home of Alan Cassidy are a child's piano next to a keyboard and a larger piano Dec. 20 in Casper. Alan's mother raised all her children with a love of playing music. 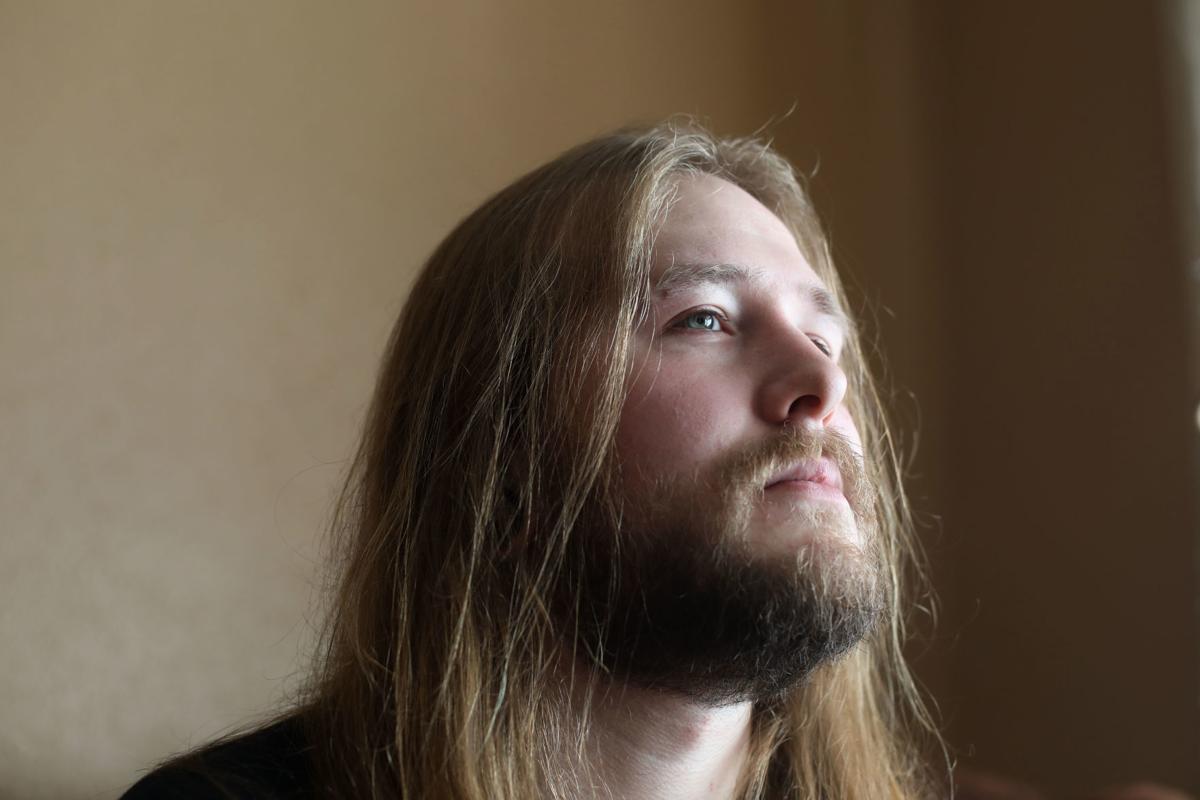 Alan Cassidy poses for a portrait Dec. 20 at his family home in Casper. Cassidy is a drummer for the metal band The Black Dahlia Murder.

Drummer Alan Cassidy was a senior at Kelly Walsh High School when he had a shot at playing in a nationally touring metal band he admired. The Oklahoma band was interested in him and wanted to record during the school year, but Cassidy still had a semester left before graduating in 2007. They went with another drummer.

“Then I just kind of thought, ‘Well there goes my shot,’” he said. “I guess I’m going to go to college, and I’m going to be a starving musician forever and not get any money and, like, not do anything but play clubs and play jazz music because apparently that’s the only thing that makes money.”

He and his mother, Diane Lynn Frame, watched “Tenacious D in the Pick of Destiny” several times together when he was in high school, and she’d repeat a line from the movie about using rock to pay the rent. She said that’s what he’d do.

She tried to convince him after the setback that it was just the first of many opportunities that would come his way.

For the past seven years, Cassidy’s full-time job has been to drum for major-name, internationally touring melodic death metal band The Black Dahlia Murder.

He grew up listening to the band, and their music was a major influence for him and his first local band.

“And so I’ve been really happy that I’ve been able to take like the main skill that I’m best at in life and that I enjoy and get to do that for a living,” Cassidy said. “So it’s definitely like the dream-come-true scenario for being able to travel and play music for a living and not really have a real job.”

Cassidy in December arrived for a rare visit to Casper for Christmas just after a Europe tour with The Black Dahlia Murder. His mother teaches in her studio in Casper and performs music, including as a member of country band Steve Frame and his Western Rebels with her husband, Steve.

Cassidy tours Europe with The Black Dahlia Murder about once or twice a year with least one annual U.S. tour. They’ve traveled Asia, Australia and South America, and they’re set to play their first two shows in South Africa in March, he said.

While Cassidy studied music at Casper College, Frame worked with the musical theater department there and arranged for her son talk with a guest choreographer from New York. She hoped he could convince her son that he wasn’t “washed up at 19,” she said.

“He goes, ‘You’re 19, you’re amazingly talented, you have your entire life ahead of you and you’re going to do so much with your talent,’” she recalled.

“Yeah it’s hard to know that if you just keep networking with people, it’s eventually going to bring you back to the same things and, like, to the same people and whatnot,” Cassidy said. ”But it was also very difficult to feel like that was going to happen, because I was living here.”

Without a way to see professional touring metal bands’ shows and meet them in person, he made contacts online. Starting in his teens, he’d message bands around the country and audition with YouTube videos of himself playing their songs in the days when YouTube was just taking off, he said.

As a baby, Cassidy would tap rattles on pots and pans with a rhythm that seemed purposeful, not random, his mother said. At age 2, he’d construct his own drum sets out of toys — a farm silo for one of the drums and even a bead chase toy with a bell on it as his high-hat.

Cassidy was always in trouble at school for constantly tapping on desks.

“And like it was just completely involuntary,” he said. “And I got yelled at by every single one of my teachers.”

By age 8, he played in his mother’s worship team at church, where people would think there was an adult behind the drums until he’d stand, she said. With his first drum set at age 10, he played with his guitarist father.

The California native moved to Casper from Michigan at about age 14 and soon after started playing in local bands. He graduated from Kelly Walsh and attended Casper College on a music performance scholarship.

Before the end of his third semester, Cassidy landed a spot with nationally touring metal band The Breathing Process and left to go on the road. He remained based in Casper during his early 20s when he wasn’t touring with them and other bands including Karen Page.

“You could tell from that early on, that I don’t know what this guy’s story is going to be, but it’s going to be special,” longtime friend and Casper guitarist Brandon Schulte said. “You just know, you know when you see it.”

A pivotal point in Cassidy’s career came when he landed a spot with black metal band Abigail Williams, an established act that had toured with many big metal bands. While still in high school, he’d befriended online the band’s singer, who helped Cassidy connect with other bands along the way, he said.

He learned The Black Dahlia Murder’s audition songs in about two weeks along the end of the Abigail Williams tour without having a chance to play them on his kit. He made audition videos as soon as he returned home because he was last in line to be auditioning and didn’t want to miss his opportunity.

Schulte and a friend helped set up video equipment for the first audition, which required constant footage of Cassidy’s upper body and feet. His friends knew he was in the running among many other drummers competing for the job.

“The Black Dahlia Murder is a huge metal band,” Schulte said. “And they only need one drummer, and they can really kind of of pick the best in the country.”

Cassidy ended up touring and recording an album with The Black Dahlia Murder just after they returned, then joined as a permanent member and moved to Michigan.

“Once I got the position to play drums with them and like tour with all these bands that I really liked and meet all these people that I looked up to and stuff, it was just, like, surreal,” Cassidy said. “I mean, even just the first tour was absolutely surreal, because, yeah, it’s just like that kind of opportunity doesn’t come along, you know, hardly ever.”

Casper friends describe Cassidy’s rare talent and drive to practice for hours a day, as well as the excitement of the hometown crowd when he landed the job.

“This wasn’t something that was just handed to him,” Schulte said. “This was something that he had to work unbelievably hard at and keep working hard at.”

But that’s not what impresses him.

“I’m more impressed with his precision,” he said. “Alan is 100 percent on the mark all the time.”

Cassidy is known for his skill in the swivel technique with a double kick pedal on two bass drums, where the heels of the feet swing side to side, Anderson said. It’s a difficult technique to do and takes a long time to master as Cassidy has.

“So he’s definitely at the very top of the list in terms of people who do apply it, and that’s being among lists of like, drumming legends,” Anderson said.

Even though Cassidy has had chance to live his dream and jokes it’s not a real job, it takes a lot of work. Albums come together in a short time, and he makes sure he’s happy with everything he writes and then prepares to record.

“The most difficult part is just like coming up with all that material and learning it and getting ready to play it in that three-month period,” he said. “That’s a lot to put so much brain power into, because it’s kind of like you’re working on inspiration too.”

Touring four to six months a year can become a grind when Cassidy’s jet-lagged, playing late shows and making lobby calls early in the morning to head to the next city, where the band sets up and does it all again on three or four hours of sleep, he said.

On his downtime during tours, he reads and has been learning Spanish. At home when he’s not working on an album, he practices for tours or works on techniques he’s interested in or wants to hone.

He often works on projects with other people, including a death metal band he’s in called Slugdge.

“I like to just kind of play with as many different people as possible and play as many different like styles of metal as I can,” Cassidy said. “I want to try and just get my name on a bunch of things to build like a portfolio kind of or like, you know, just have music that I’m proud of and that I can show people and that I enjoy listening to and stuff. So yeah, drumming is just kind of like my main deal.”

Alan Cassidy talks to his mother at his family home on Dec. 20 in Casper. Cassidy is a drummer for the metal band The Black Dahlia Murder.

Inside the family home of Alan Cassidy are a child's piano next to a keyboard and a larger piano Dec. 20 in Casper. Alan's mother raised all her children with a love of playing music.

Alan Cassidy poses for a portrait Dec. 20 at his family home in Casper. Cassidy is a drummer for the metal band The Black Dahlia Murder.