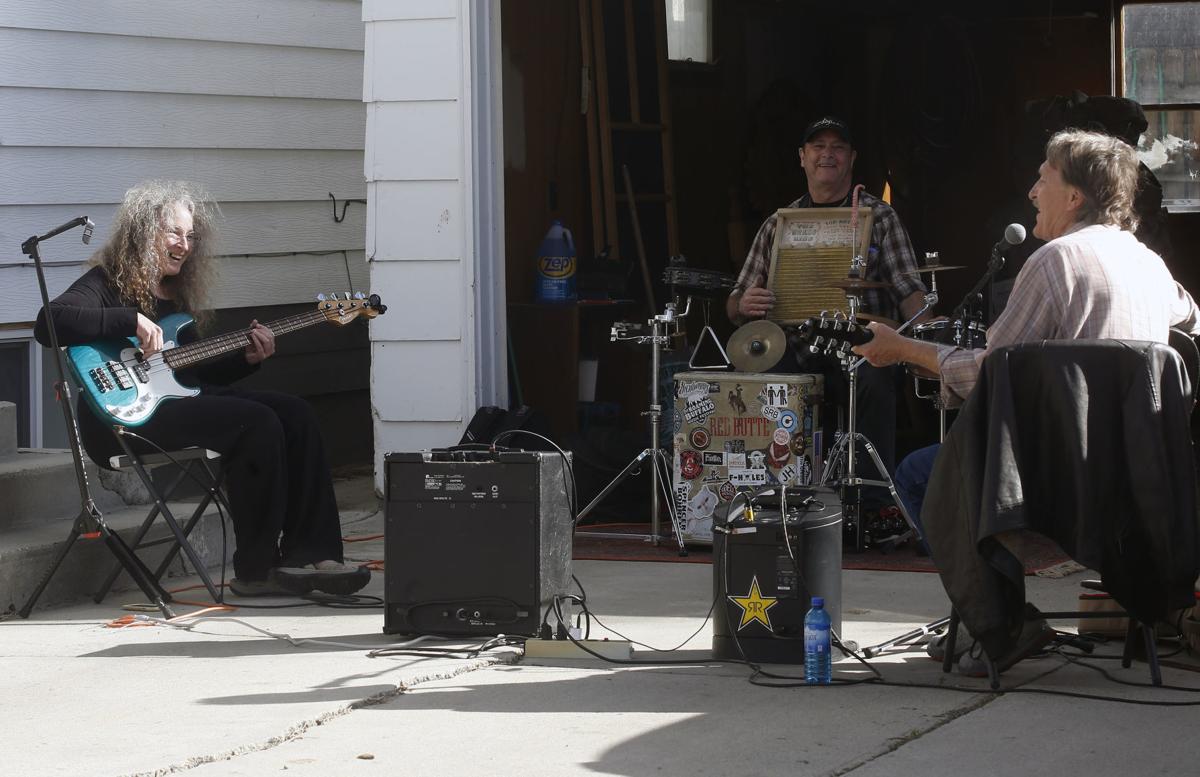 Amy Gieske, Dale Krasovetz and Cory McDaniel rehearse May 15 in a Casper driveway. The members of the Cory McDaniel Three-Piece Duo perform in various other groups, which are among many Wyoming acts that have faced cancellations, tentative dates and postponements with restrictions placed to slow the spread of the novel coronavirus. The three last performed a show together in March before the first restrictions went into place. 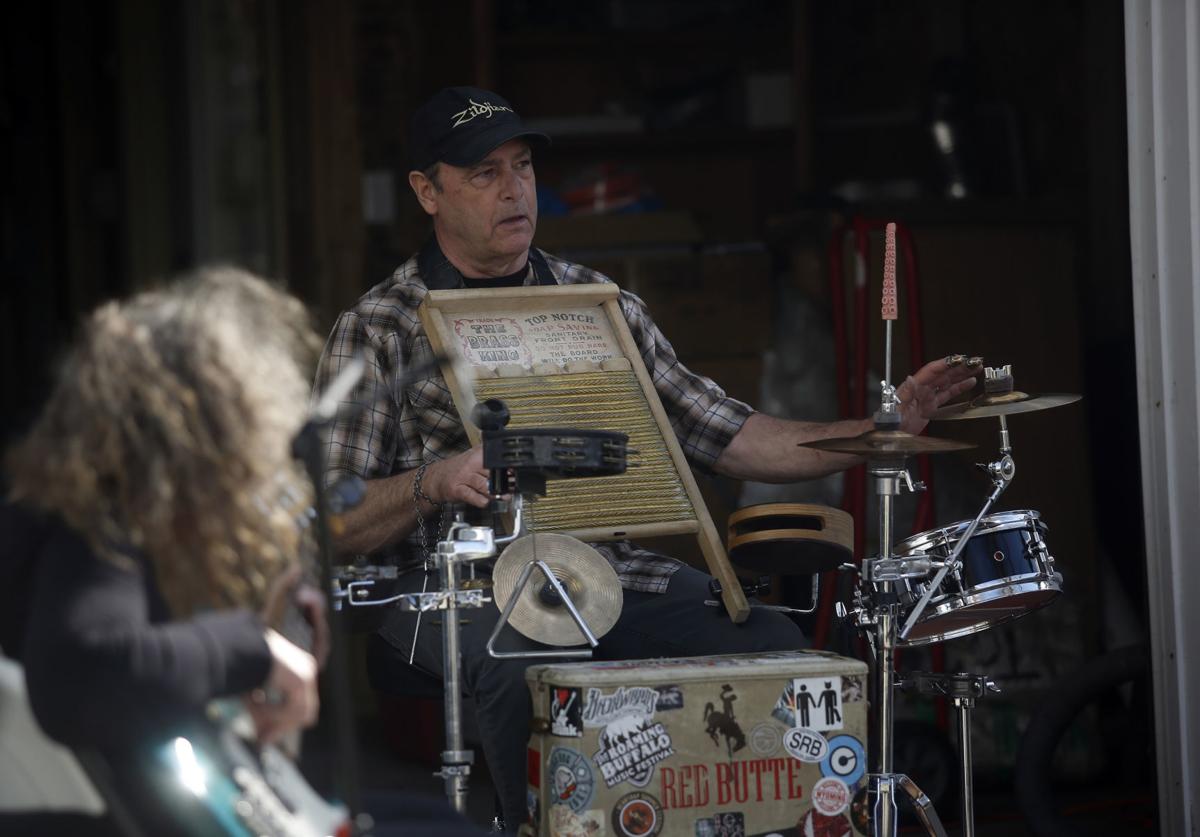 Dale Krasovetz reherases May 15 with Amy Gieske and Cory McDaniel in a Casper driveway. They're among Wyoming musicians considering when and how they may begin to perform with eased state restrictions. 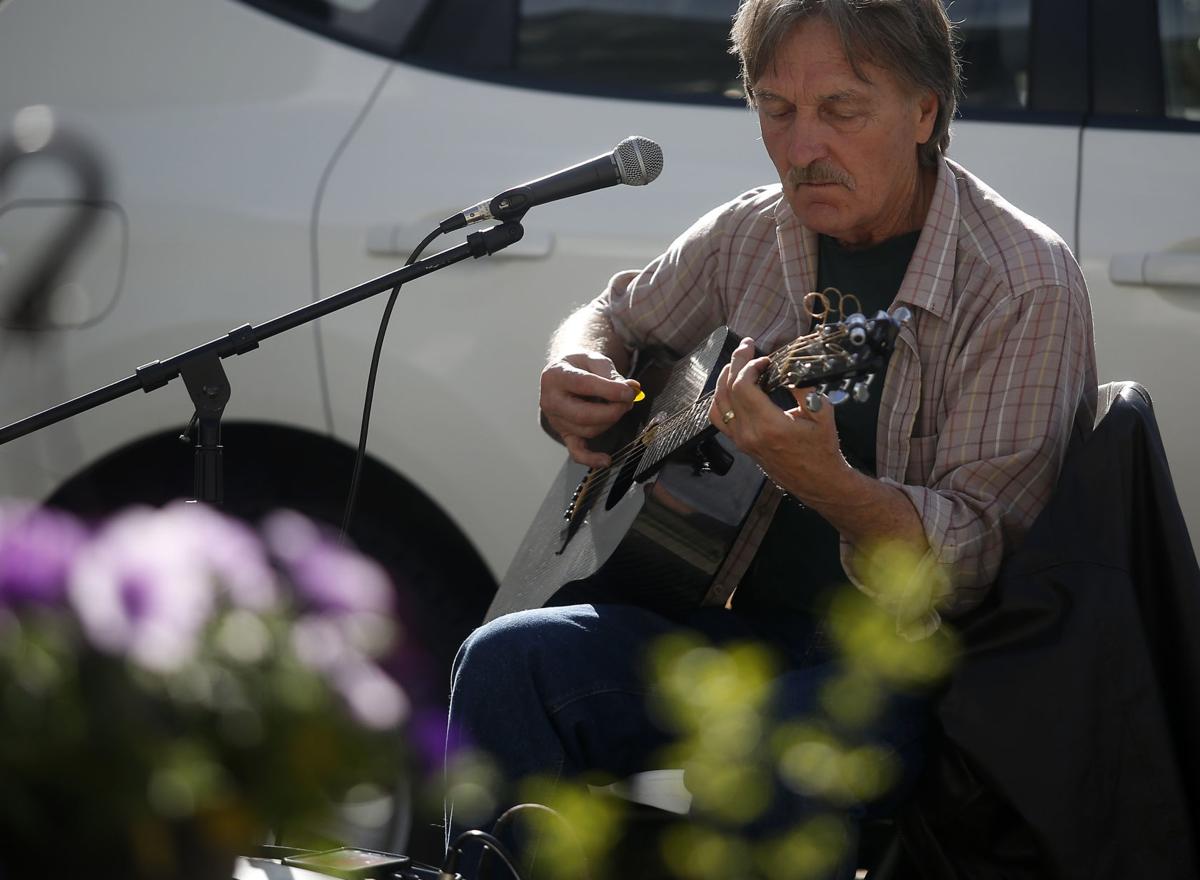 Cory McDaniel rehearses with the the Cory McDaniel Three-Piece Duo May 15 as they socially distance in a Casper driveway. 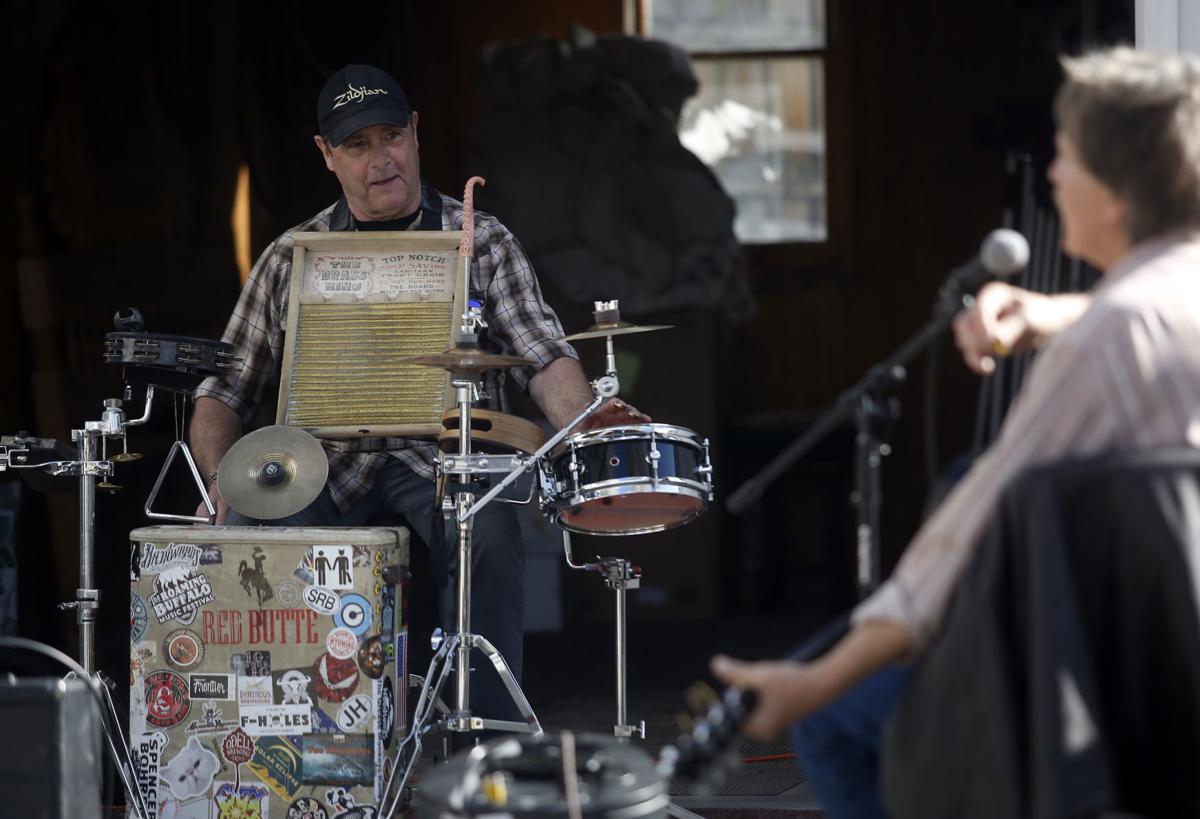 Casper musician Cory McDaniel didn’t realize how much he’d missed making music with others until he gathered his instruments May 15 and his heart raced with a jolt of excitement. He was on his way to a central Casper driveway, where he and two other fellow musicians spaced for social distancing and rehearsed.

The three had performed as the Cory McDaniel Three-Piece Duo in March shortly before statewide measures to slow the spread of COVID-19 and keep medical facilities from becoming overwhelmed. Last Friday was the first time McDaniel had played with other musicians since.

Gov. Mark Gordon last week announced lifts on some restrictions, including allowances for performance venues and movie theaters to operate with certain conditions. Bans on gatherings of fewer than 10 have been upped to 25, and movie theaters and concert venues can allow more than 25 with restrictions. State officials warned that risks are greater than before and restrictions can return if and when cases spike again, and they urged Wyomingites to wear masks in public and socially distance.

McDaniel is among the Wyoming musicians who’ve faced cancelled, postponed and tentative gigs in the past two months and well into summer. As they follow updates on the easing restrictions, many Wyoming musicians are considering when and how they might begin to perform in a future that remains uncertain.

McDaniel said he may not play a live show soon, though he relished a chance to once again take up instruments with others.

“It’s great being able to work on movies and all that stuff and write stuff,” McDaniel said. “But man, playing live with somebody else, there’s just something that happens that you can’t get anywhere else.”

McDaniel met Friday with his frequent music collaborator, bassist and vocalist Amy Gieske, and percussionist Dale Krasovetz to rehearse for fun and for an upcoming documentary by filmmaker Dennis Rollins of Casper for which McDaniel has written music.

The eased restrictions to McDaniel looks like an experiment and one he hopes works. He continues to be extra careful though, because he visits a friend who’s immunocompromised.

“So, my personal thing is, I’m going to wait and see what happens,” he said.

McDaniel and Gieske have had summer gigs cancelled in Wyoming and Seattle. A theatrical Artcore show based on historic Wyoming madame Dell Burke was originally slated for this month but is postponed to October. They’re thinking of ways the musicians and actors can socially distance during that show, Gieske said.

Summer might be a good time for outdoor shows — as long as people follow safety rules — and they’ve talked about a local street show, she said.

“But, you know, I’m up there in that age group that is kind of high risk,” she said. “And so we’re trying to be careful.”

Krasovetz, who plays percussion for Casper Americana band Red Butte, said the Mansface Mountain Music Festival in Green River they’re set to play is so far still on for July as far as he knows.

“But, yeah, I’m with Cory and Amy and Red Butte is as well,” he said, “that everybody wants to kind of wait and see.”

Jason Shogren of Laramie and his band J Shogren & the Shainghai’d were set to play several festivals this spring that are now postponed until September. He hopes they’ll be able to take place then, but nothing is certain, he said.

“It’s hard to say what’s going to happen in September, and it kind of depends on how this experiment of everybody coming back out from the houses after two months, how this actually works out,” he said.

There’s many logistics for venues and event organizers to work out, and many events have been cancelled.

“And then the question is, you know, even if you do run it, how nervous are people to come back out?” Shogren said. “And that’s the big question mark. It seems like a lot of people are itching to get back out and live a normal life, and we really don’t know what that what that means right at this second.”

Shogren has been taking to online performances, though it’s not the same, he said. He’s not yet sure when the time will be right for him to perform live again, because he’s more at risk for severe complications of COVID-19.

“That’s kind of where I’m at,” Shogren said. “I think if I was 30 years younger, I’d have a different perspective.”

Casper metal band From Ash to Stone looks forward to playing shows and especially touring again, guitarist Jeremiah Pogroszewski said. The members have invested in the band and worked on new music last year and were looking forward to travel weather when the pandemic hit. Several gigs were cancelled in the past two months. They’ve put out music online while people are at home and looking for entertainment. Pogroszewski sees the easing restrictions as good news, though he’s not getting his hopes up yet about performing.

“I’d say we’re more ready,” Pogroszewski said. “Every time we get together, we’re talking about how we’re ready to start doing shows again and getting out on the road.”

“If things are going to ease up then we definitely want to try and do some shows towards the end of the summer a little bit,” he said, “especially when people are a little more comfortable with the idea of actually being out at a venue again.”

He’s been following what’s happening with restrictions because he’s interested in the promoting the local music scene with shows that bring people to local businesses like Bourgeois Pig coffee shop where his band has played several shows.

He’d want to make sure safety measures are taken to avoid spreading the virus. At punk shows, people tend to run around and into each other, so a safe social distancing would have to be discussed ahead of time, he said.

“As long as people feel safe, then I feel confident in doing the show,” Smith said.

Chase Sandoval, 21, has played local coffee shops as well as solo singer-songwriter act Figures in Fiction. He doesn’t have to worry about mosh pits or people moving in close and screaming into the mics, which would be the norm at many of his friends’ punk and hardcore shows, he said.

He said he’d probably play a show if he were offered one, and he’d take precautions including wearing a mask. His biggest concern is not so much catching COVID-19, but that if he does, he could be one of those with no symptoms who spreads it to others.

“Wyoming is definitely one of the lesser-affected states, so we might be able to get away with just a little bit of reopening,” he said. “But I wouldn’t want to go bust the gates open, completely quite yet.”

Steve Frame of Casper said he feels mixed emotions about restrictions easing. He heads Steve Frame and his Western Rebels and performs in duet Buffalo Scout with his wife, Diane Lynn.

They’ve both experienced cancelled, postponed and tentative gigs. Frame’s summer booking at the Silver Dollar Bar in Cody is uncertain and the two are on the lineup for Nic Fest in Casper, which has been postponed for July.

They’ve taken to a variety of online musical projects, like Frame’s live streamed Cool Ol’ School Sunday Morning on Facebook that draws participants from across the country. He sees the easing of restrictions as a balancing act between not rushing in and the bars and venues that rely on that business.

“I personally just want to put out a call that everybody to be understanding and be patient for both lines of thought,” Frame said. “Because unless we have that, then then we’re not moving forward realistically, and together; we need to move together.”

Amy Gieske, Dale Krasovetz and Cory McDaniel rehearse May 15 in a Casper driveway. The members of the Cory McDaniel Three-Piece Duo perform in various other groups, which are among many Wyoming acts that have faced cancellations, tentative dates and postponements with restrictions placed to slow the spread of the novel coronavirus. The three last performed a show together in March before the first restrictions went into place.

Dale Krasovetz reherases May 15 with Amy Gieske and Cory McDaniel in a Casper driveway. They're among Wyoming musicians considering when and how they may begin to perform with eased state restrictions.

Cory McDaniel rehearses with the the Cory McDaniel Three-Piece Duo May 15 as they socially distance in a Casper driveway.