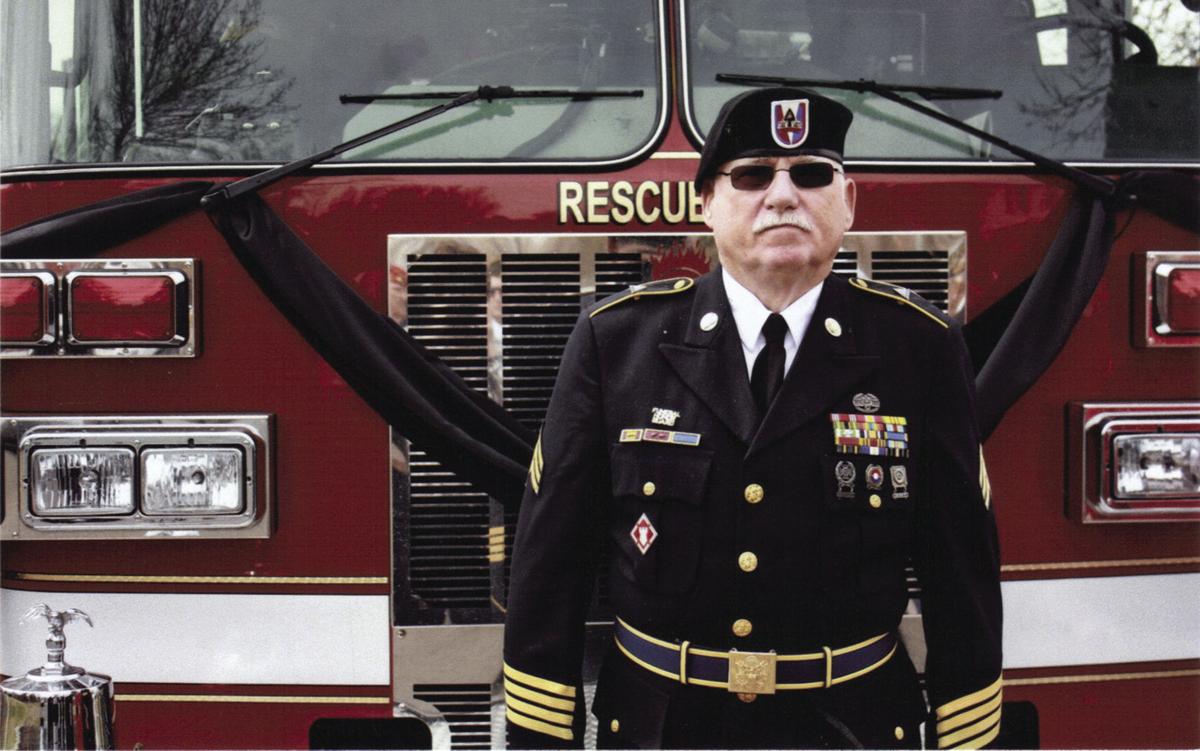 Jim Arndt stands in front of a fire truck in honor guard uniform in 2015. 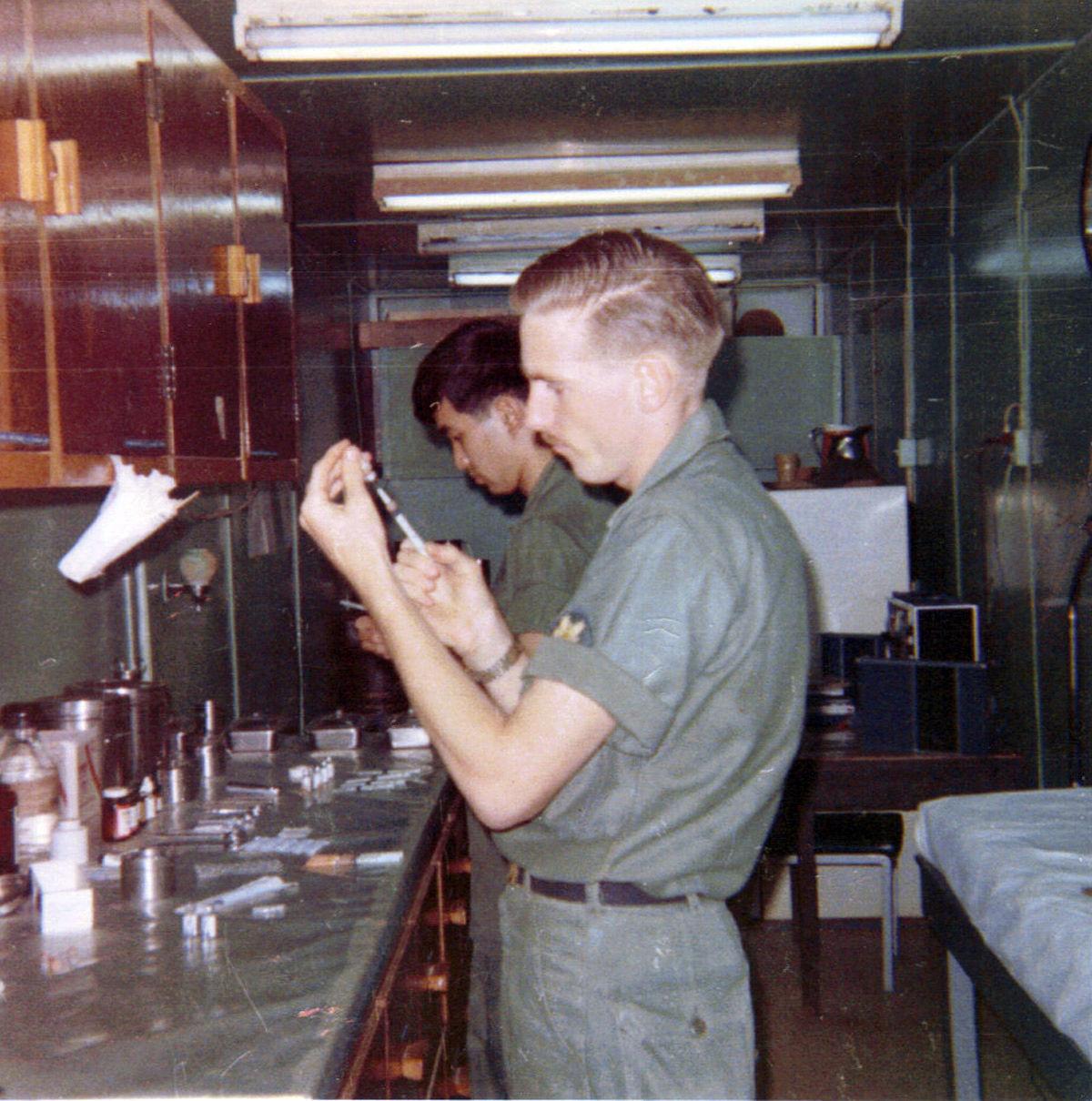 Jim Arndt fills a syringe in an aid station in Long Binh, Vietnam, where he served as a medic in 1968. 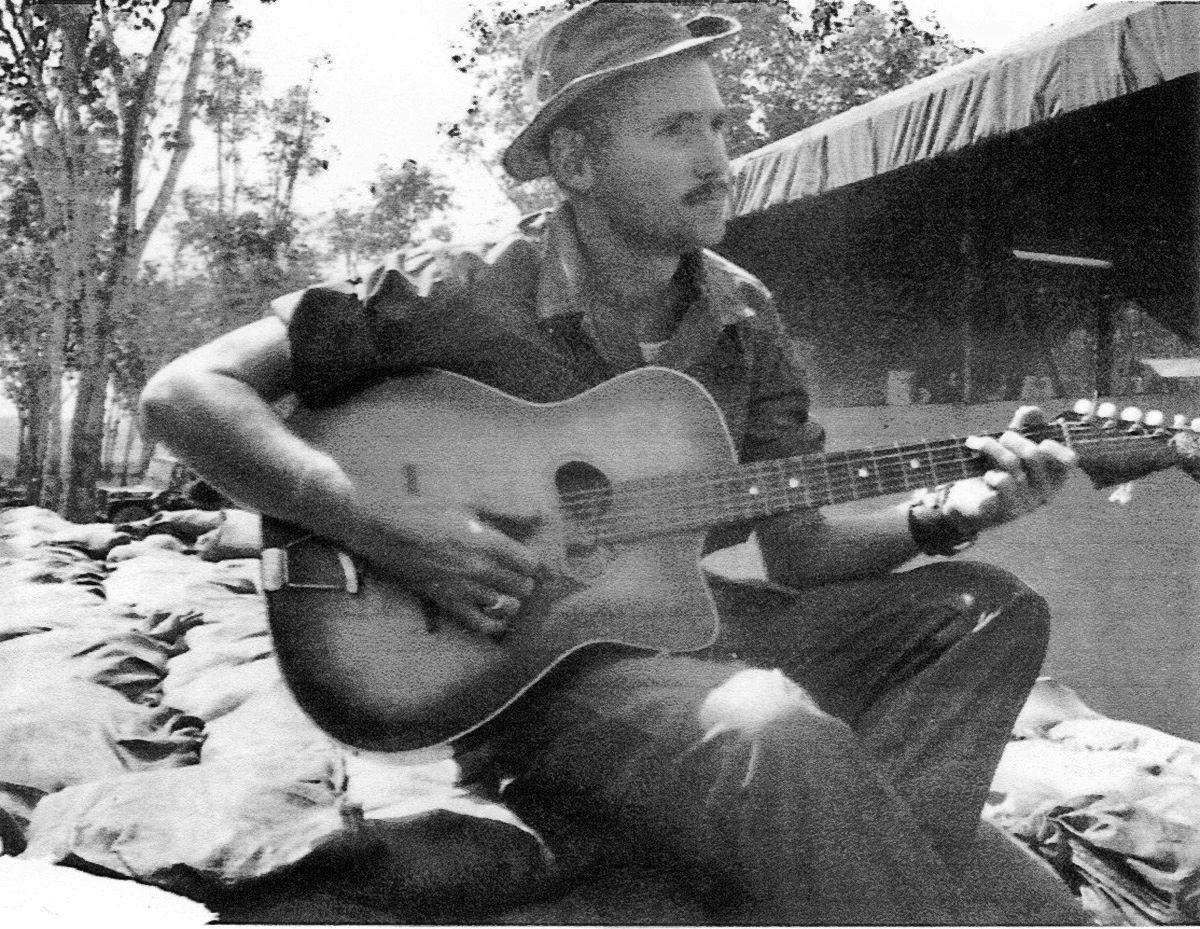 Jim Arndt plays guitar near an aid station in Vietnam in 1968. 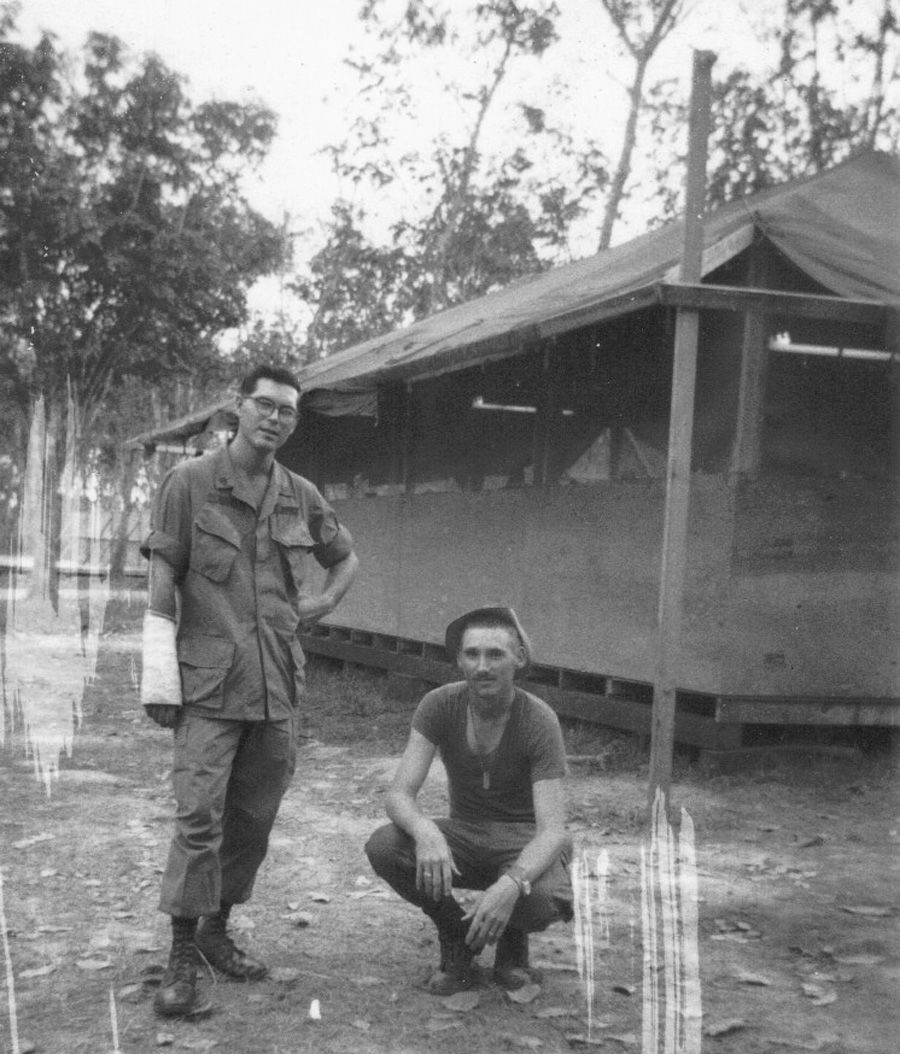 Jim Arndt (right) poses for a photo with a friend in Vietnam in 1968. 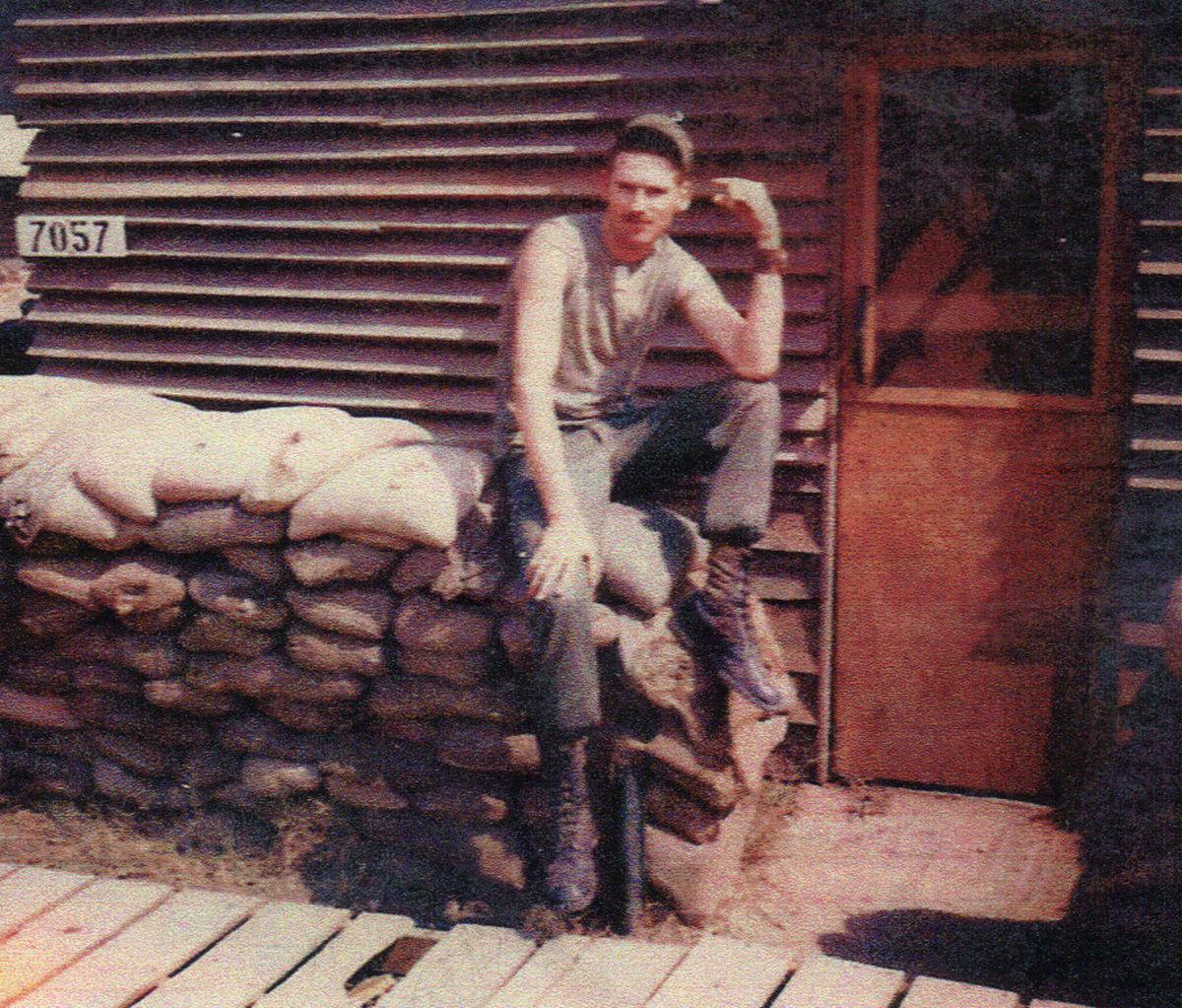 Jim Arndt sits on sandbag reinforcements in March, 1969, shortly before the end of his tour. 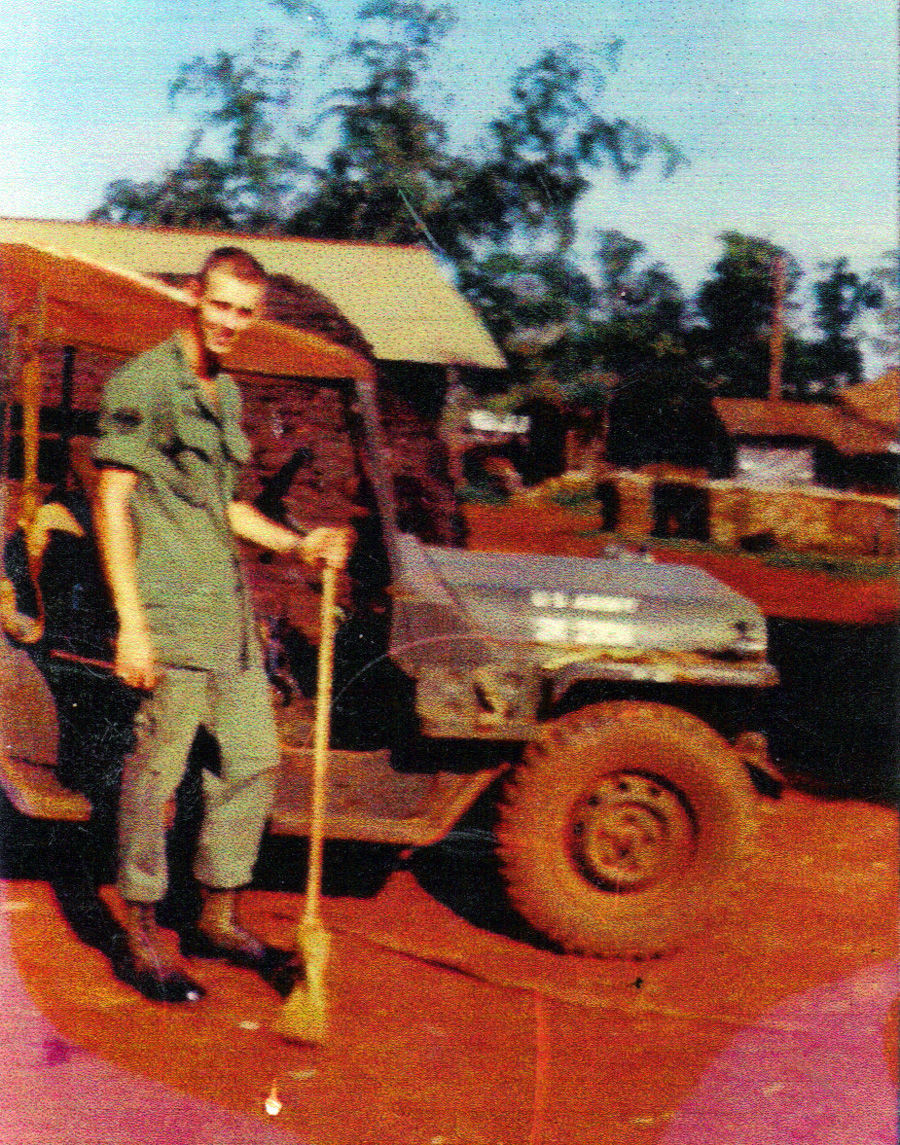 Leroy Bradbury, one of Jim Arndt's friends in Vietnam, stands next to an Army Jeep in 1968. 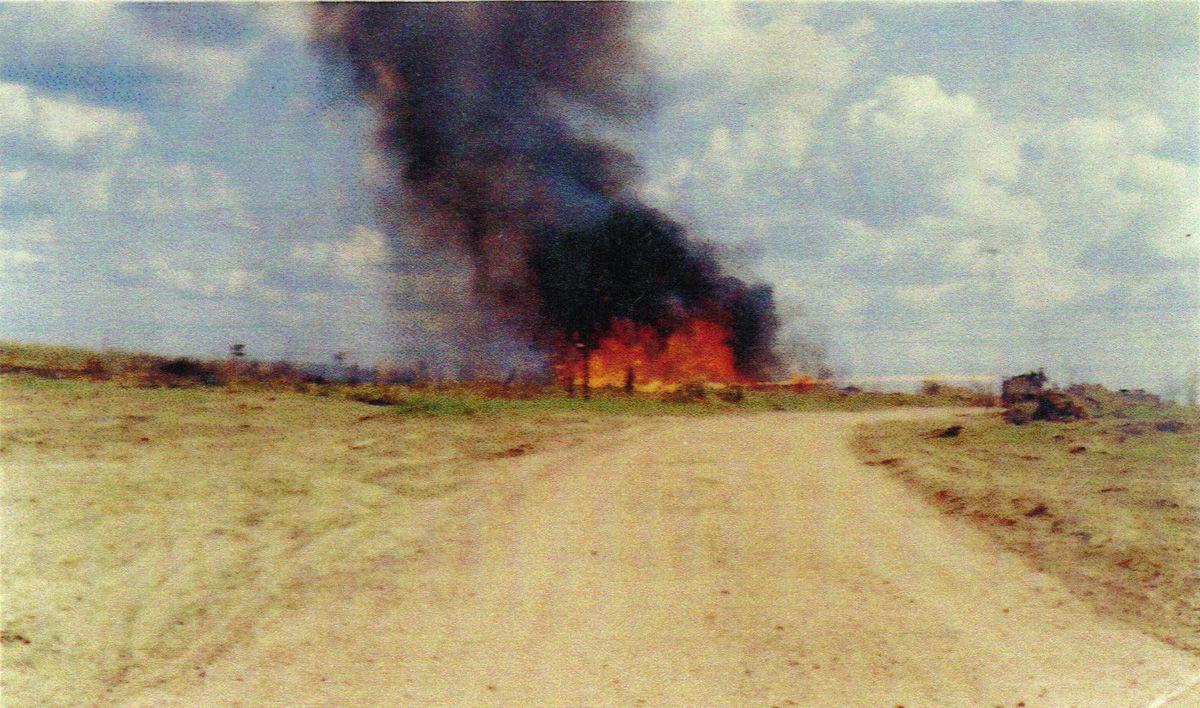 A minefield is burned to remove vegetation before soldiers work to clear it in Vietnam in 1969.

“Being a medic, I didn’t know what to expect,” said Jim Arndt. “A lot of nasty things happen as a combat medic.”

He arrived in Vietnam just after the Tet Offensive, serving from March 1, 1968, through April 28, 1969. He received his combat medic badge in September 1968. An incident which took place that month remains vivid.

“We were out (on patrol) all night – not much happened. We were on our way back toward the compound the following morning,” Arndt recalled. “We heard an explosion behind us, so we turned and went back up the road. There was a bus that had gotten blown up in the road.

“This bus was hauling civilians into Black Horse that were doing cleaning... at the compound. The bus was laying on its side. The patrol set up a perimeter. My job was to go inside the bus and check for survivors. We pulled out the bodies: men, women and children – they were all dead. That was my first experience with kids and women in that situation.”

Afterwards, Arndt was assigned to an area known as Rocket City.

“It got mortared four to five times a day,” he said. “That’s where I ended up for my last six months. ... We were doing minefield work.”

That minefield holds another vivid memory.

“On March 24, 1969, LeRoy Bradbury and I were on the detail that day. We went to the airfield to check on what was going on,” Arndt remembered. “About nine o’clock in the morning there was a massive explosion at the end of the runway. LeRoy and I jumped in our jeep and headed toward the minefield.

“We had six men down. All the safety lines were gone. We had no idea where, how, we could get in that minefield. We looked at each other and said, ‘we got men down,’ and we jumped over the wire and ran into the minefield to take care of our wounded.”

One man died instantly from the explosion. Arndt and Bradbury worked quickly to bandage and care for the five wounded while others in the unit worked to secure an evacuation area.

“It took about 45 minutes to clear a path so we could get our wounded out. It was a day that we won’t forget– it’s one of those days that go through your head (often).

“I didn’t know the end result of those men until about four years ago,” Arndt continued. “I didn’t know whether they had lived or died. … They never came back to the unit.”

Several years ago, Arndt came across a website for the 31st Combat Engineers, the group with which he served during his time at Rocket City. He made contact and received a roster, and eventually was able to contact many from that group.

That’s when he learned the fate of the men from the minefield. He reconnected with them, including sharing meals with one of the survivors who traveled through Wyoming one year. He also joined the unit’s second reunion.

“I met up with 60 of the guys that were in the unit and got to talk to five or six guys I had patched up one way or another,” said Arndt. “Now I keep in contact with all the survivors of the minefield – it makes a big difference.”

Reconnecting with men from his unit has helped deal with the pain, the anguish and the questions.

“I can remember those who didn’t come home – they haunt me, and I often ask, ‘Why me? Why did I survive and others didn’t?’”

Arndt had enlisted in the Army in 1966 prior to high school graduation. After basic training, he was sent to a field hospital unit at Fort Knox and received medical training in Texas.

“We were supposed to go to Japan to set up a field hospital unit... to take care of the wounded,” he said. “Thirty days prior to leaving the states, we got orders to disband the unit (and go to Vietnam). I knew I was going to be a medic … but I had no idea what was in store for me.”

His first assignments were at Bear Cat and then Black Horse.

“It was just a nightmare most of the time there – I really found out what a medic’s job was right away,” he said.

During this time his wife, who had been eight months pregnant when he was sent to Vietnam, had their first child. The Army had to tell the family that Arndt was missing in action. He had been out on a long-range patrol with his unit when they came across the enemy.

“The squad I was with got split up. My wife had our son, and my mom had sent a telegram to the unit to say I was a dad,” Arndt said. “The company commander sent a telegram back saying I was missing in action – they didn’t know where I was at because we had gotten split up. It was like three days later that I got a message saying I was a new dad.”

When he returned to base, Arndt was able to go to Saigon and call home to let his family know he wasn’t missing.

“That was kind of a trying time for (the family) because they didn’t know whether I was alive or dead,” Arndt reflected.

One of the positive aspects of serving in Vietnam for Arndt comes from recognizing the importance of his job.

“The men really relied upon us – they called us ‘doc,’” he said. “We didn’t have a doctor in the field with us. Band-Aids, sutures, pharmaceuticals – we did it all. I knew the men could depend on me, no matter what happened; I was going to be there to do whatever needed to be done.”

A life of service

Arndt stayed in the military after leaving Vietnam. Although he attempted to exit service, “civilian life just wasn’t working out,” he said.

He served in the Army as well as with the Air Force. He and his family spent time in Minnesota, Washington, New Jersey and Germany. While with the Air Force, his duties included refueling aircraft; he even refueled Air Force One a few times, he said.

Arndt was medically discharged in 1984. He’s experienced 13 tumors on his right leg – a product of Agent Orange, he said – and has undergone several surgeries. He lacks mobility and feeling in his right foot.

“When it gets cold outside, if my left foot is cold, I know my right foot’s gotta be cold,” he said with a touch of humor.

“Some people … told me, ‘You’re only going to be able to work a couple hours a day and that’s it.’ I thought to myself, ‘No, they’re going to try to put me in a rocking chair and set me on the front porch, and that’s not gonna work.’ I have pushed myself to find out what my boundaries are and what my limitations are, and I continue going and doing stuff – there’s more to life than just sitting in a rocking chair and watching the clouds go by,” Arndt said.

Today, Arndt’s “going and doing” focuses on helping other veterans. Arndt joined the Fremont County Honor Guard three years ago, assisting with and serving in military funerals, and he also helps manage Veterans Hall in Riverton.

“It’s a unique group of men – we’ve been able to pull together as a unit; we’ve created a brotherhood. It’s all part of the healing process,” he said.

“We make sure our vets don’t go without,” he added. “We help veterans and their families with whatever need they have. We even make appointments for them.”

Arndt and his family moved to Wyoming after his medical discharge. He served more than 16 years with the military and does not regret that service, nor the service he continues to give today.

“I enjoyed the military. I enjoyed serving my country – that’s why I do what I do today,” Arndt said. “I’m here to make sure our veterans get the recognition they deserve and the help they deserve. About sixty percent of my time is working to help veterans – I’m pretty content.”

They Served with Honor

Jim Arndt stands in front of a fire truck in honor guard uniform in 2015.

Jim Arndt fills a syringe in an aid station in Long Binh, Vietnam, where he served as a medic in 1968.

Jim Arndt plays guitar near an aid station in Vietnam in 1968.

Jim Arndt (right) poses for a photo with a friend in Vietnam in 1968.

Jim Arndt sits on sandbag reinforcements in March, 1969, shortly before the end of his tour.

Leroy Bradbury, one of Jim Arndt's friends in Vietnam, stands next to an Army Jeep in 1968.

A minefield is burned to remove vegetation before soldiers work to clear it in Vietnam in 1969.