Merriam-Webster defines the potato pancake as a "lobe-finned fish known chiefly from Paleozoic and Mesozoic fossils."

Regardless, while both the potato pancake and the coelacanth go great with sour cream and applesauce, that's where the similarities end. In fact, I'm not even sure why we're talking about coelacanths in the first place. This is a family newspaper, for the love of Mike.

Potato pancakes, on the other hand ...

Why you need to learn this

Well, taters are totally tasty and a whole heap cheaper than those 50,000-piece jigsaw puzzles you've been stockpiling of late. And speaking of stockpiling, I noticed that 20-pound sack of russets in the background of your latest live-streamed video rant. Before they spontaneously turn into vodka, why not get the whole family involved and rustle up some potato pancakes. What with all the peeling, the grating, bandaging the cuts and cursing the darkness, there's a job for everyone.

The steps you take

Most of you already know potatoes. Perhaps, like me, you're of good Irish stock with a nurtured if not natural predilection for the starchy tuber embedded deep in your psyche. On the other hand, perhaps you hail from a potato-free culture, like the Moonish or the Zombiesians. In which case, listen up:

Like you and me, potatoes are comprised primarily of water and covered in a thin skin. Unlike us, though, with our bone and blood and grotty bits, potatoes are pretty much just starch. And here's why that's important: Different potato varieties have different amounts of starch, which affects how they react to cooking.

Happily, for potato pancakes, any potato will work, and I wouldn't worry about those differences. Save your worry for things that matter, like how you're going to pay the robber barons who run the college your kid wants to attend.

Other ingredients include binders and flavor enhancers, but, we'll get to those after I've prattled on a little more.

Now, like Satan, potato pancakes come in many forms and go by many names. The Swiss, for example, mostly omit the binding ingredients and call it rosti; the Irish combine raw and cooked potatoes and call it boxty; Satan himself calls them "scrapey flat browns" (It's in the Bible; look it up).

Here's the thing to remember, no matter the nomenclature: In a world where monkeys play canasta and vampires rule the night, it's not a bad idea to flatten a potato and cook it in fat to a golden brown.

The potatoes. Most potato pancakes are made from grated raw potatoes, but you can also use cooked, pureed potatoes. The texture's different, more like a syrup-soaked breakfast pancake, but, what the hay. You could also combine raw with cooked potato, like the aforementioned boxty. Or — and you'll want to remember this next holiday season — you can get all Nutsy Fagan and use your leftover mashed potatoes. Figure about a quarter- to a half-pound of potato per person.

The binder. Binders, such as beaten raw egg, help keep grated potato from falling apart like the Habsburg Empire. I'd say one egg per couple pounds of potatoes should do the trick, but, add more if you like. Who am I, Leslie Limit-Your-Egg-Consumption? Besides, more egg equals more protein.

You can also add some flour, maybe a couple tablespoons per pound for starchy potatoes like russets, and a touch more for what we call "waxy" potatoes, like red potatoes.

The flavoring ingredients. I love white pepper in potato pancakes, but, not so much that it tastes crazy. It's a peculiar flavor, white pepper. My friend and former colleague chef Dina Altieri says it always reminds her of Band-Aids. So, maybe it's ix-nay on the ite-pepper-whay.

You know what else I love? Well, comfortable socks, but, apropos of this article, onion. You can dice it, but, I like to grate it, maybe half an onion per pound. Grated onion is very watery, but, if you grate it into cheesecloth or a clean (duh!) kitchen towel, you can squeeze out the juice. You should try a sip of that juice, by the way. It's one of the most offensive things I've ever put in my mouth. If you have mortal enemies, use it to make them a cocktail. Like a rum 'n' onion. Pairs well with coelacanth and applesauce. Anyway, I never bother with the squeezing.

You also can add fresh herbs or cheese — cheddar, Parmesan and ricotta are all nice — or cooked and crumbled bacon or sausage. It's all delicious.

Salt. Potatoes are as bland as an Andy Williams album. (Here come the angry letters calling me "Sonny.") They need more salt than you probably realize. I'll say more about this below, but, as always, taste as you go.

Here's what you do:

1. Combine all your ingredients in a bowl. If you're using raw potatoes and especially if you've added grated onion, water will start oozing out and it'll look fairly scary, like a hand might reach out of it and grab you by the neck. Don't panic. Just stir it all back together right before cooking. Or, pour off the water and give another quick stir.

2. Now, here's some really good advice: Before making your pancakes, cook off a little portion of the mixture so you can taste it for seasoning. That way, you can make any adjustments — like adding more salt — before you cook it for real. Dig?

3. When you're confident the seasoning is correct, heat up a nonstick pan or two and add a bit of fat, just enough to coat the bottom of the pan, or, if it's super nonstick, just enough to roll around from side to side in the bottom of the pan. When the oil is hot, add the potato mixture. I use two 8-inch nonstick saute pans and cover the entire bottoms with the potato glop. It makes big pancakes that I cut into extremely attractive wedges to serve. You could also use a giant nonstick pan or a sprayed griddle and make smaller pancakes.

4. Whatever you decide, cook the pancakes over medium to medium high heat. Thinner ones cook more quickly and are crispier, whereas thicker pancakes (like the ones I make) are softer with a creamier interior. If your pancakes are thick, you could cover the pan to ensure that the interior cooks before the bottom burns. It'll retain more moisture that way, giving you less crunch. Figure about 3 to 5 minutes per side, depending on the size.

If your potato pancakes are well-seasoned and flavorful, you can just eat them as is, straight out of the pan, like the storied bachelors of yore. Or, you could serve them on a plate as if Queen Beatrix of the Netherlands were coming over.

1. Break egg into a large bowl and whisk lightly.

2. Peel potatoes, grate them, then add to the bowl on top of egg.

3. Peel onion, grate it, then add to the bowl on top of potatoes.

4. Add flour, salt and pepper. Stir to combine all ingredients thoroughly. As the batter sits, the water will separate from the potatoes. Either pour it off or stir it back into the mixture to create an even consistency before cooking.

5. Heat an 8-inch nonstick skillet over medium heat. (Note: If you have two 8-inch pans, use them both to cut down on cooking time.) When hot, add oil to coat bottom. Spoon one-quarter of potato mixture into pan and smooth out to cover entire bottom evenly. Cook over medium heat until golden brown and crisp, 8-10 minutes. Flip and cook other side until bottom is brown and crispy and potatoes are cooked through, 8-10 minutes. Remove to a warm plate and keep in a warm oven until all pancakes are made.

6. Cut pancakes into wedges and serve immediately with sour cream and applesauce.

What's for dinner? 5 easy recipes to get you through the week

For many Americans, the upcoming Memorial Day weekend marks the beginning of the outdoor grilling season. Here are a few tips from to get you ready to fire up your outdoor grill.

Cooking with what's on hand: How to make great dinners with frozen fish or canned seafood

Frozen fish in many cases proves far superior to the “thawed for your convenience” items at the supermarket.

The Kitchn: This pork fried rice is ready in 15 minutes

A quick skillet of fried rice is one of the easiest, most satisfying ways to transform leftover rice into a complete meal.

Whether you cook turkey or beef burgers, ribs or pork chops, chicken breasts or legs, fish, or vegetable kabobs this holiday weekend, one of the condiments on our menu will be the perfect complement.

Whether you say potato or poTAHto, you may be thinking 2020's a good year to call the whole thing off. Don’t!

Coronavirus diets: What's behind the urge to eat like little kids?

During these stressful times, if you find yourself reaching into the pantry of your past, you're probably not alone.

From-scratch noodles may not be an everyday treat, but it’s a fun cooking project that will give you a taste of how delicious fresh noodles can be. 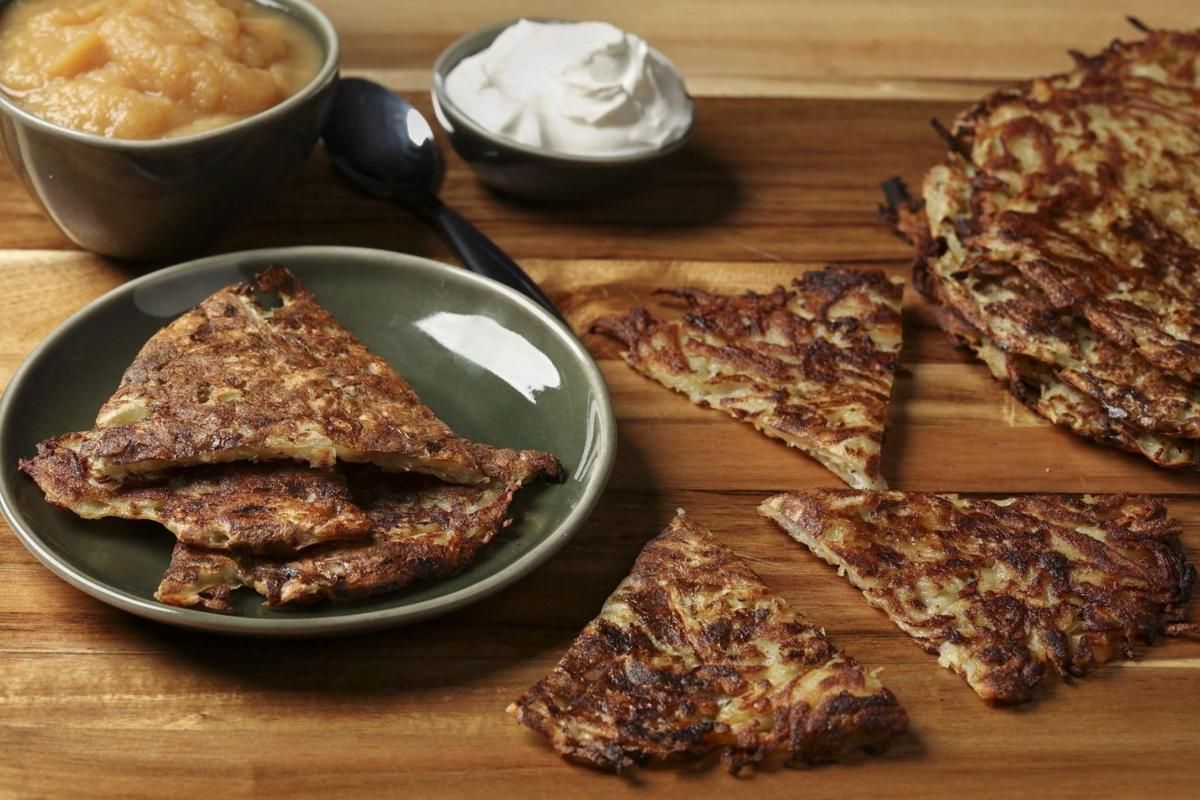 Making potato pancakes can be a family project, with extra hands helping to peel and grate potatoes and onions. (Abel Uribe/Chicago Tribune/TNS) 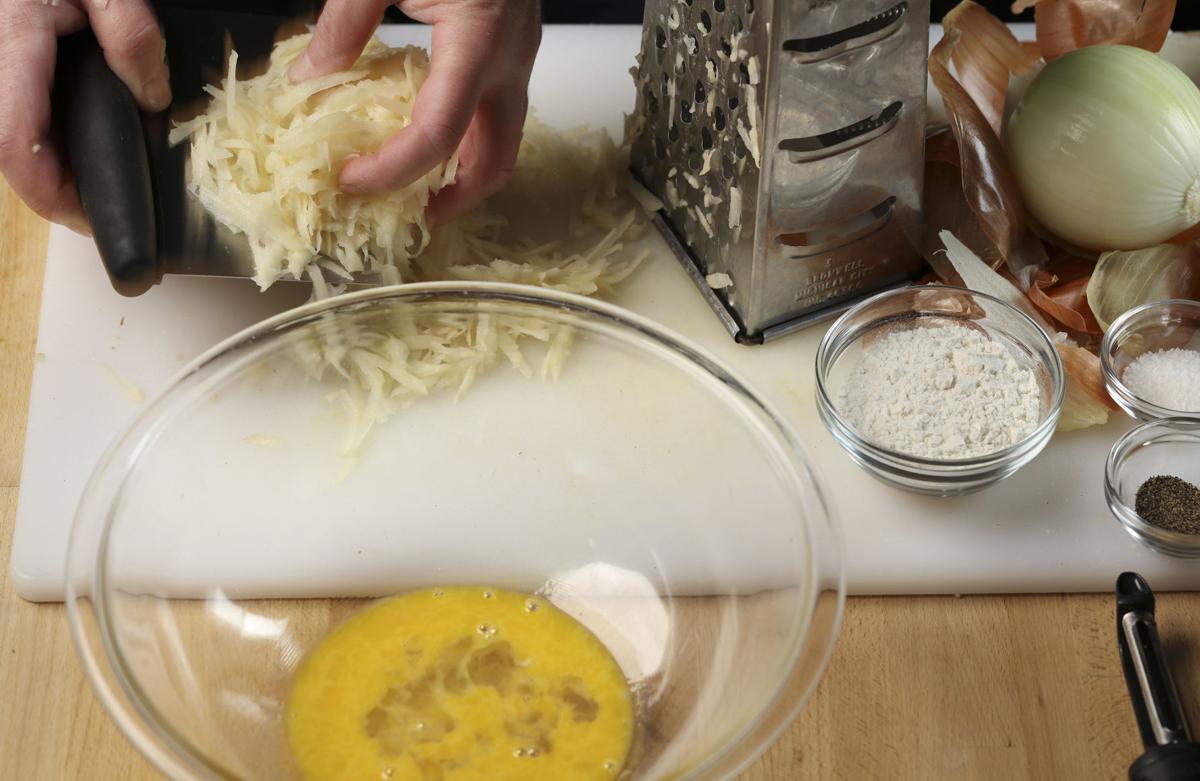 Most potato pancakes use raw potatoes. You'll grate them, then add them to the eggs. (Abel Uribe/Chicago Tribune/TNS) 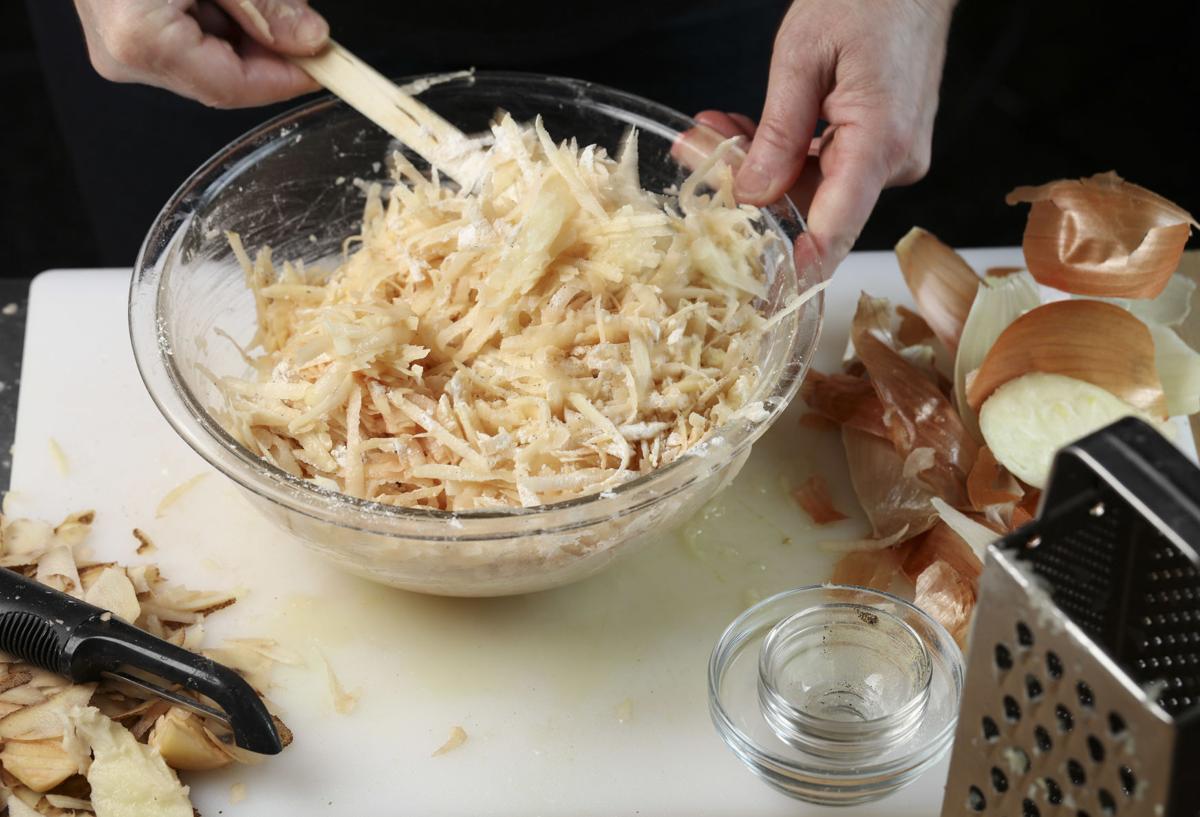 After adding the binder (flour) and seasonings (salt, pepper), mix the egg and grated potatoes and onion together until the ingredients are uniformly distributed. (Abel Uribe/Chicago Tribune/TNS)