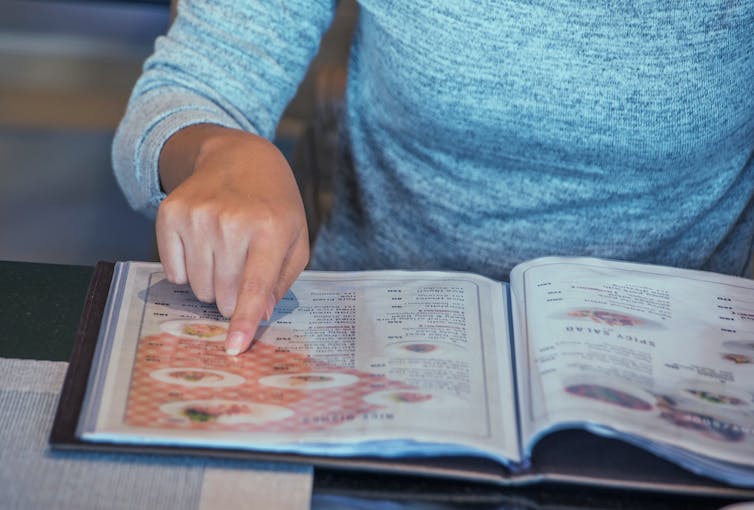 Were you subtly encouraged to make that menu choice? Supavadee butradee/Shutterstock.com

Every day, you make important choices – about whether to feast on fries or take a brisk walk, whether to spend or save your paycheck, whether to buy the sustainable option or the disposable plastic one.

Life is made up of countless decisions. The idea of nudging people in the right direction, instead of relying on their internal motivation, has gained traction over the last decade.

Think of employees being automatically enrolled in retirement savings programs. Workers who must opt out, instead of needing to opt in, participate more in retirement savings. Or picture those little cards in hotel bathrooms encouraging people to reuse their towels by stating that most hotel guests do, instead of appealing to the guests’ social responsibility.

In these and countless similar situations, people feel in control, but were nudged to prefer one option over the other.

So how does all this nudging work within the mind? As someone who studies consumer decision-making, I can tell you: It’s complicated.

You’re of two (or more) minds

Neuroscientists, starting with pioneers like Antonio Damasio, have shown that the brain is not like a computer where complex programs deliver optimal solutions. In fact, the mind seems to involve many relatively simple systems, some inside the head and some distributed throughout the body.

These systems are not always in agreement. Some systems are selfish and shortsighted, some care about relationships with others and some prioritize transcendent things such as God and the future of humanity. In addition, people aren’t equally conscious of each mechanism, so that sometimes you make decisions carefully and thoughtfully and other times you make them fast and intuitively.

When your systems are in contention, which one informs your next decision depends on what else is happening in that moment. A diabetic, for example, may thoughtfully consider his long-term health and family responsibilities – and even God’s will – when deciding to eat the salad and not the breadsticks at Olive Garden one day. But on his next visit, he might respond to the smell of fresh-baked bread by devouring every breadstick in the basket. Different situations, different mechanisms, different decisions.

Appeals to your internal norms

Nudging can work via many mechanisms, some conscious and some not. Typically you don’t recognize you’re being nudged. 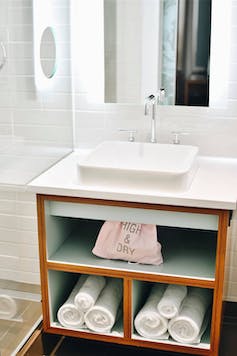 Everyone else reuses the towels … Andrea Davis/Unsplash, CC BY

One nudge method relies on highlighting the decisions of others you may consider influential. After reading that “Most other guests staying at this hotel reuse towels,” many people envision others like them or maybe of higher status reusing towels. They feel compelled to align their behavior with that of the majority in order to fit in. The decision is theirs, but they’ve been nudged.

Another nudge technique focuses on how one should act in a particular situation. These are sometimes called “injunctive norms,” and they can vary by culture. Imagine the towel appeal had instead read, “By reusing towels, you join millions who care about the environment.” In this case the guest’s subconscious concern about earning the disapproval of those “millions” of others triggers him to hang up his towels.

And if the towel message is instead phrased that “reusing towels meets a high standard for environmental responsibility,” it highlights self-imposed standards or norms, if they exist in the decision maker. Such personal norms are termed injunctive because they involve beliefs about right and wrong that consider transcendent and abstract concepts, such as devotion and obedience to God.

Interestingly, such prompting – whether by subjective social or personal norms – does not work on everyone. Some may work better in some cultures (for instance, in Asian societies) and with some age groups (such as in younger people) than others.

Setting the scene for a desired choice

Another way to nudge people is to change the decision environment. This technique is sometimes called “choice architecture.”

Let’s assume that a grocery store is trying to encourage consumers to purchase ecologically responsible products, such as recycled paper notebooks. If all eco-friendly products are displayed together in an end-of-aisle display, people notice and their internalized norms are activated. But it may not translate into multiple purchases, because buying just one product suffices to meet the norm. If the products are displayed throughout the store, though, so multiple in-store displays can re-trigger the internalized norm, it’s likely that more ecologically responsible purchases will be made in the same shopping trip.

Nudging people is not deception. In most cases, nudging works by raising a particular decision or behavior’s prominence. If you’re already predisposed toward something – like eating healthy – a nudge helps tip your mental mechanisms in that direction. Nudges are reinforcement, especially in cases when your decision-making mechanisms are in contention with each other – like when the aroma of fresh bread is wafting through the air. 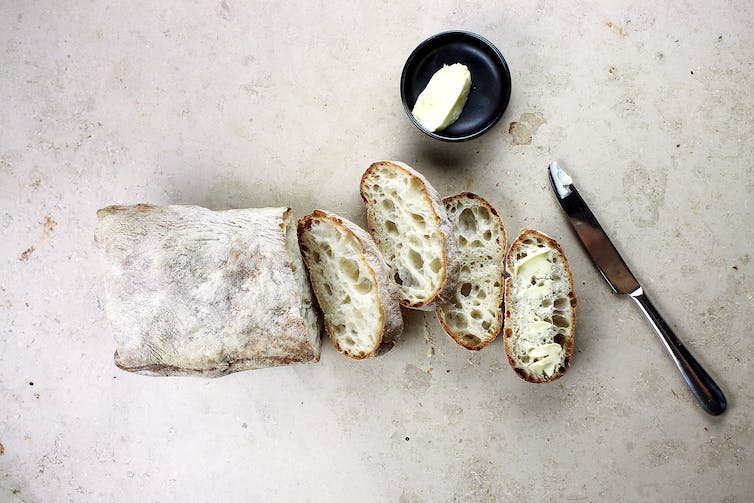 That scent of fresh-baked bread could be used to nudge you in the direction the restaurant prefers. Toa Heftiba/Unsplash, CC BY

At the same time, that wafting aroma is in itself a nudge. It may be deliberately enhanced to promote pleasurable consumption that improves mood and may lead to more spending or more generous tipping. Nudging can work to enhance or suppress virtuous behaviors, and it is the responsibility of companies and organizations to use nudging judiciously and responsibly.

Nudging cannot make people do something they don’t want to do, although sometimes the desire is nonconscious and lurking in the background. It only encourages them to follow through on a decision or behavior that may be currently overshadowed by other factors. It’s when individuals believe consciously that the decision or behavior – be it healthy eating, buying environmentally responsible products, or saving for retirement – is beneficial that nudging works best.

[ Insight, in your inbox each day. You can get it with The Conversation’s email newsletter. ]

This article is republished from The Conversation under a Creative Commons license. Read the original article.

Human-to-human transmission confirmed in China coronavirus: What you need to know

Human-to-human transmission of coronavirus was confirmed in China. Here's what you need to know and video of the market linked to the virus' spread.

Must-Reads Of The Week From Brianna Labuskes

Newsletter editor Brianna Labuskes wades through hundreds of health care policy stories each week, so you don't have to.

Plenty of foods can help improve your cholesterol ratio and promote good heart health overall. Here's a look at what you definitely want to be eating more of.